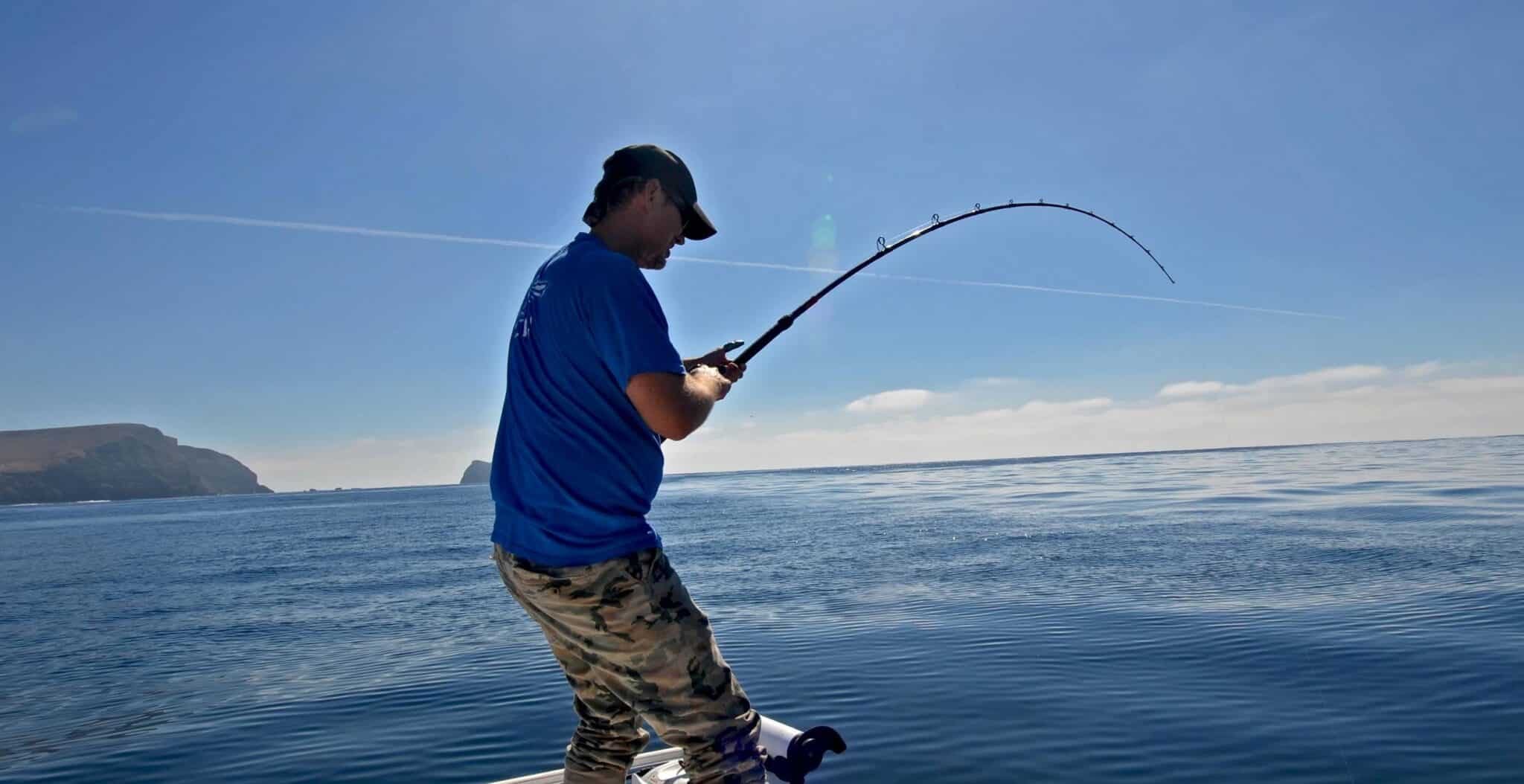 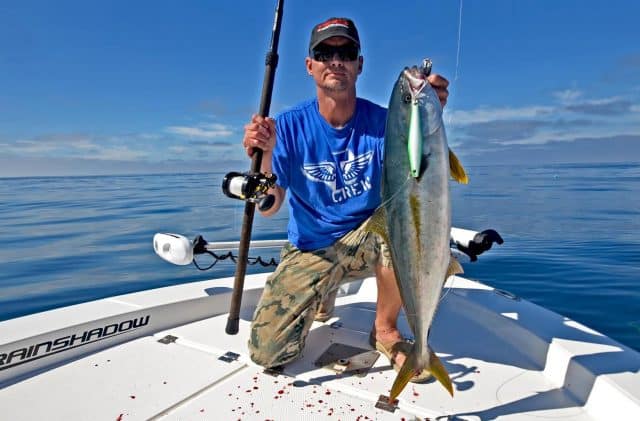 I’ve always considered myself to be fairly open minded when it comes to embracing new and different fishing tackle but when Matt Kotch showed up at my house with a new Rainshadow jig stick, I took one look at it and said, “You’ve got to be kidding me”. Matt proffered the 10-foot rod saying, “At least pull on it, it has tons of power”. Bracing the butt against my mid section, I pulled for all I was worth while Matt held the rod tip. Letting out a groan I suggested, “Have fun with that, it’s too much rod for me”.

The following day Matt brought his new jig stick tuna fishing and I was prepared to tell him “I told you so” when he hooked a fish in the 70-pound class. To my surprise I never got the chance because he had the fish to gaff in the first five minutes. “You got lucky on that one because it didn’t pull” I told him, thinking the next one would do him in for sure. 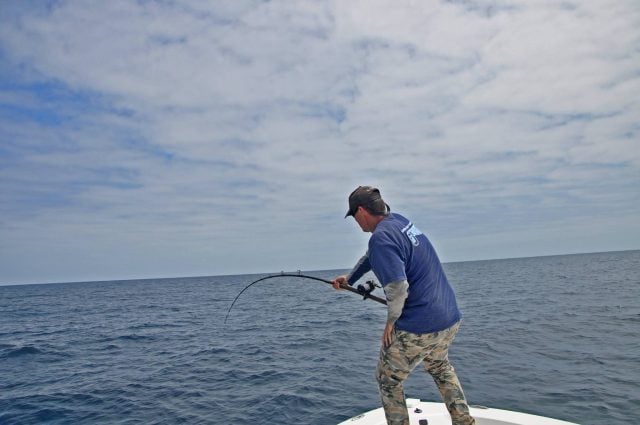 The next bite came soon enough and although the fish did dog him quite a bit at deep color, he was able to use the rail to absorb some of the pressure and still killed the fish in a reasonable amount of time. At that point I was curious enough about the rod to take a few casts with it. Though considerably different than the glass long rods I’d grown up fishing, it did fire the jig pretty far and didn’t feel heavy or sluggish like some glass rods can. Shortly after I gave up casting what would from that day forward be known as “Matt’s rod”, he picked it back up and killed a 50-pound fish on it in about a minute.

This new jig stick goes by the name of the Tuna Popper and comes in 8 and 10-foot models and MH and Heavy ratings. To my surprise, the rod we had turned out to be the Medium Heavy model, which leaves me wondering just how heavy the Heavy model is. Whatever the case, I can vouch for the fact that there isn’t a whole lot you can’t handle with the MH. 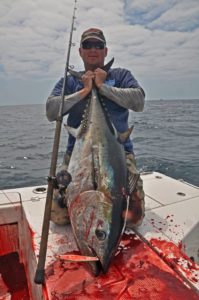 are a very far cry from the old glass long rods that we’ve been fishing our whole lives.One of the biggest differences is that these are two piece blanks that are designed with a ferrule just above where a normal length handle would end. This placement keeps the ferrule from affecting the action even when the rod is fully loaded. In fact, the fit is so seamless that I didn’t even know that it was a two piece rod until Matt took it apart. As a private boater I like this feature because I can break the rod down to fit in a rod locker when I’m not using it. The fact that it’s two-piece also allows you to bring your long rod next time you fly somewhere on a fishing trip. If you’re dead set on having a one-piece jig stick it would be very easy to epoxy the two sections together and no one would ever be the wiser.

The blank construction process is also quite different than what we are used to when it comes to West Coast jig sticks. 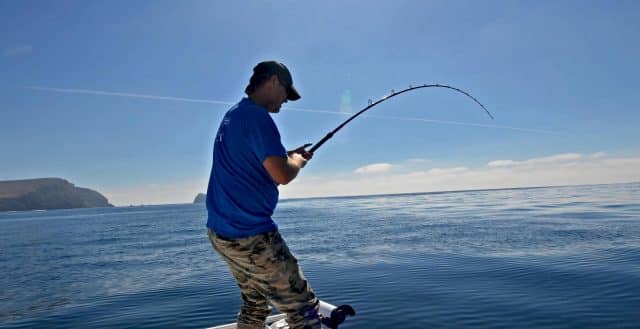 According to the Batson website, the blanks are constructed by, “blending a thin ply E-Glass material with 24 ton RX6 graphite, then we wrap the entire blank tip to butt with a proprietary carbon filament wrap in the hoop direction for added strength without adding weight.” This description was a little too technical for me to decipher so I spoke with my friend Eric Noguchi, who wrapped “Matt’s rod” for us and he explained that by adding graphite and carbon filament into the rod construction they were able to make a thin walled, light-weight rod that was stiffer and more durable than a comparable glass rod. 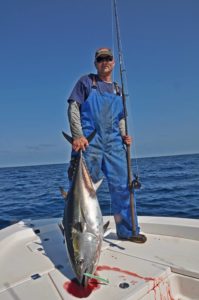 Since that first tuna trip, Matt has put the rod through it’s paces in a number of scenarios and it’s come through all of them with flying colors. On several occasions I was able to pry “Matt’s rod” out of his hands long enough to catch a few fish on it and can honestly say that it’s a superior product to the glass jig sticks of yesteryear. Something to keep in mind is that this is a long rod that does give the fish a significant leverage advantage. So, if you’re used to fishing 8 and 9 foot jig sticks the rod is going to feel a bit odd. However if you’ve been throwing the long rod your whole life you’re going to love this rod. We matched “Matt’s rod” with a Penn Torque 30 star drag reel, which makes for a comfortable fit. With 80-pound spectra to a short 60-pound fluorocarbon leader, the rod excels at casting bigger jigs like a Tady 45 or Salas 7X.