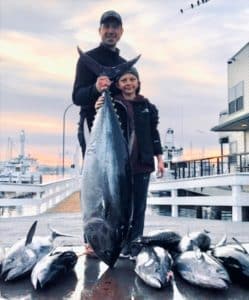 Are you over it?

This last week was tough on the water.  We had some wind and lots of rain.  The best fishing of the week happened before the big storm hit midweek.  One of the high points was a 1.5 day trip on the New Lo-An.  Capt. Adam Williams returned on Tuesday morning (December 3rd) with 5 nice bluefin tuna (above) and 101 yellowfin tuna for 23 anglers.  Adam reported a heavy casualty rate.  They ran into some bigger bluefin early Monday morning that resulted in a lot of bent and broken hooks.  Adam was recommending 50# or 60# line if you get out on a future ride.  Also, if you’re the braid to short fluoro leader kind of angler, you might want to consider putting on a topshot of mono to add some shock absorber to your setup.  It will help with the bent and broken hook situation and I personally feel that it gets bit better.

We’ve been seeing this late-season bluefin for the last few years now.  Bluefin aren’t as enamored with warm water as yellowfin.  That’s why I’m scratching my head over this December yellowfin.  It’s pretty crazy, but they’re still hanging around.  If you wanted to give tuna another go before year-end, you’ll get your shots.  The biggest issue at this point is the weather and waning interest.  There are boats still going out offshore though.  You could get lucky and catch a light load, and some late-season tuna if you decide to go.

This week’s weather is supposed to be much better, so it could be a good opportunity.

There was a weather window on Friday.  I didn’t have high hopes of getting out, but I just needed to do it.  Plus, as I mentioned last week, I have yet to catch a legal halibut this year.  Last year, I got lucky and scored a nice one on January first.  I went out with my buddy, Capt. Bob Beyer.  We drifted the pipe off Newport Beach in his skiff.  We made mackerel just outside the harbor, but I actually scored on a white plastic grub while the bait rod sat in the rod holder.

That’s the thing about halibut fishing, it’s much easier to target them on a skiff vs. on a sportboat.

Sportboats don’t typically target halibut because it’s already a low percentage kind of endeavor, and good halibut spots (like drifting the pipe at Newport) just aren’t practical to fish in a sportboat kind of scenario.  The bow and the stern might be in a good position, but everyone in the middle would get caught up in the structure.

Dana Wharf Sportfishing runs halibut drift days on Fridays and Sundays during its Halibut Derby, offering a better than average sportboat opportunity to catch a flatfish.  That said, temper your expectations if you go.  They caught a legal on yesterday’s ride, but that makes only 9 fish on the leaderboard as of today.  They started running these trips at the beginning of last month. 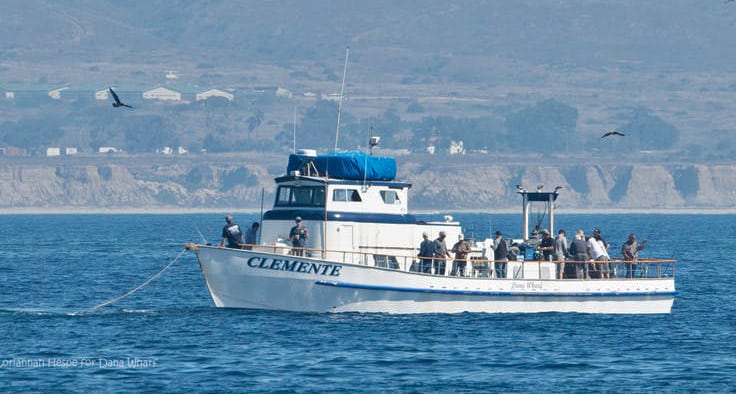 Even with the low percentages, I just needed to get out and gave it a go on Friday (December 6th).  Capt. Corey Lieser took us out on the Clemente.  To start the day, Corey went north.  The conditions were perfect.  We started our drift just outside the line of lobster traps and a slight offshore breeze pushed us on a slow drift along the hard bottom there.  I got bit on my first drop and got about 4 cranks on it before it came off.  My bait came back raked from the midsection down.  Despite the good conditions at that spot, it didn’t produce any fish. 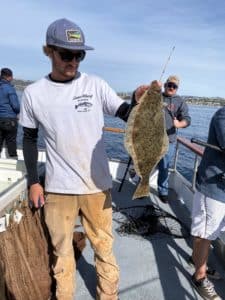 We made a move south.  It was a deeper spot…maybe 150-160-feet…where Corey said there was a shelf next to a deeper crevasse.  He said baitfish liked to congregate there to take advantage of the upwelling of nutrients from below, and halibut liked to hang out there to prey on the bait.  There were a couple of bites there, but the fish were lost.  I got the impression that their drags may have been set too tight because the crew was talking to the rest of us about properly setting your drag afterward.  For halibut fishing, similar to white seabass, I like to fish a star drag reel and have the drag set kind of low.  The new spot did end up producing a fish, but it was an inch short.  It got thrown back and ended up being lunch for a sea lion 🙁

After 12 PM, it started pouring…HARD.  I fished out the bait I had, then found a spot in the galley to wait it out and have some lunch.  There was a brief stoppage where I went back out.  I got bit again, but it didn’t stick.  It started raining again, and that was my day.

A sheephead caught by derby regular Javier Calvo, beat out a sand bass to take jackpot for the day.  Tough day of fishing, but it is what it is.  The big excitement for the day was when the angler next to me on the stern got real heavy (below) on a fish that ended up taking him all around the boat!  In the end, though, it was a black seabass, and it was safely released. 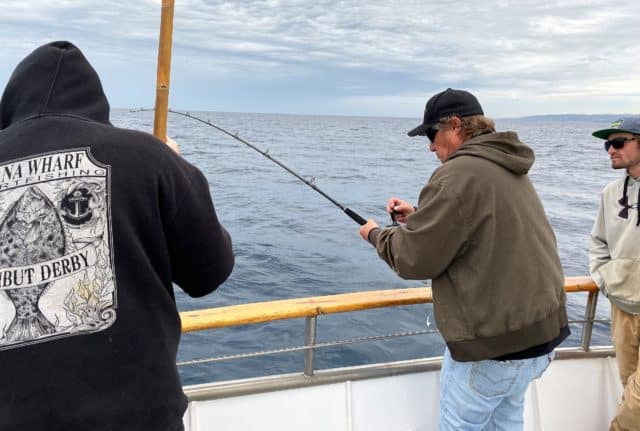 As I said earlier, this week is supposed to be nicer weather, so I might try to give it another go this coming Friday.  Halibut fishing is one of those things where you have to put in your time before luck eventually catches up with you.  Good luck if you get out there.