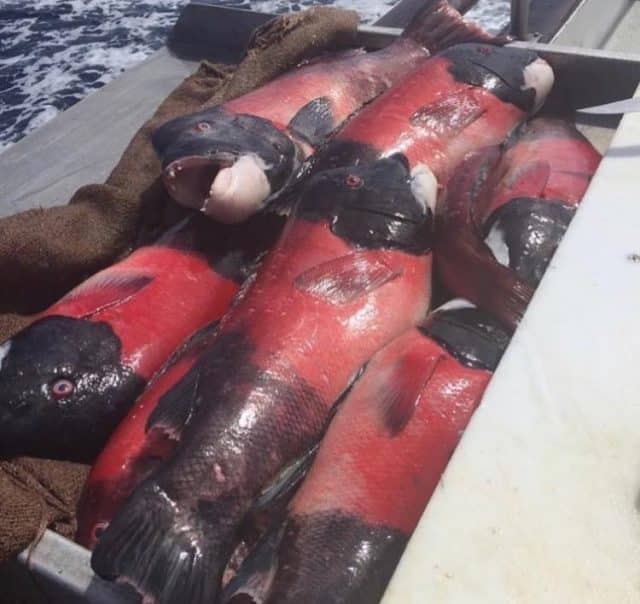 We’re in for another wet one heading into this weekend.  That will make it every weekend this month.  I never thought I’d be jonesing this hard to go rockfishing.  I’m holding onto the hope that when I wake up Saturday morning at San Nicolas Island aboard Eldorado Sportfishing it will be clear and fishable…assuming we make it off the dock.  Wish me luck.

Assuming we do get out, I like the prospects of the trip.

Every other trip they’ve been catching (or at least had shots at) yellowtail.  They have live squid and you know how it is…good things can happen when you have the candy bait.  Even if we don’t get on the yellows, I’m excited about the prospect of catching a sheephead (aka That Damn Fish) this early in the year.  They’ve been getting quality models of them (pictured top) on the regular.

I took away something from that whole Knocker Rig discussion.  Someone had shared an East Coast jig intended for tautog with rattles inside the jighead.  The creator of the jig hypothesized that it’s effectiveness was related to fact that the rattling noise it emitted mimicked the sound of crabs shuffling along on rocks.  It’s an established fact that sheephead love their crustaceans (ask any commercial lobster fisherman), so I’ve been dying to try the knocker for targeting sheephead.  I’ll let you know how that goes.
Other Island News 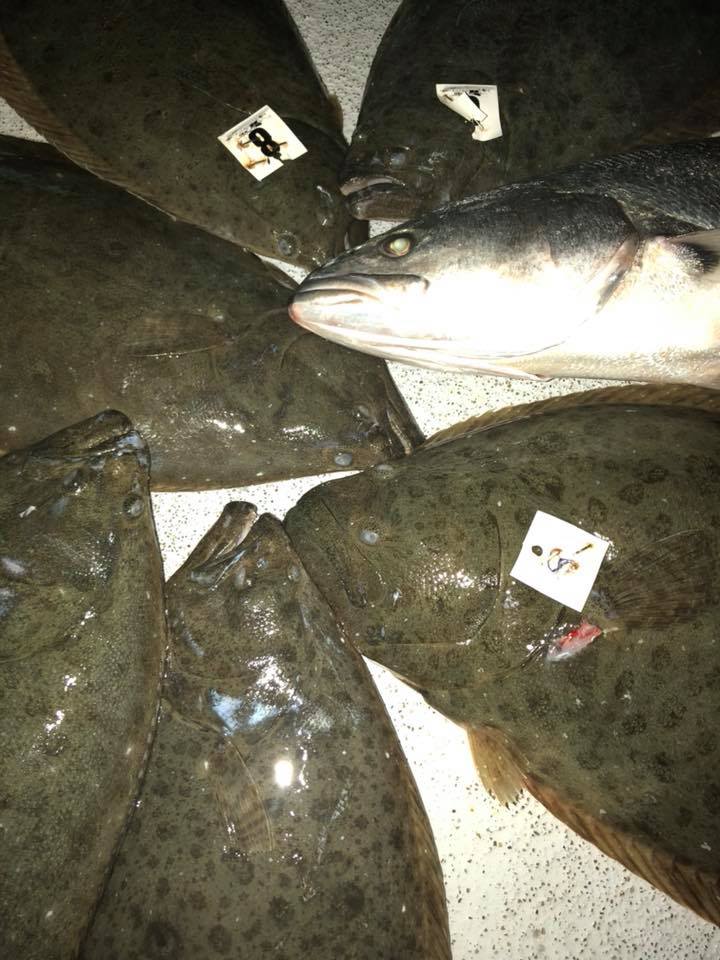 This week the Ultra out of 22nd Landing went on their inaugural trip of the year.  Again, availability of live squid led to a good outcome for the anglers onboard.  They ended up with 6 halibut, 1 seabass! (above), 6 calico bass, 28 reds and 2 lings (boat has a max load of 10 anglers).

Very respectable fishing report given the up and down conditions so far this season.
I’m getting lots of reports about squid at Catalina.  I really feel like once this weather straightens out, things could get really good.  I would recommend that you check your moonphase and book some trips now looking ahead at next month and beyond.  I caught my new personal best (62 lbs.) on the Fortune last year in April at Catalina.  Hoping I can reprise (or better?) that feat this year in 2018.
Don’t Forget The Coronados 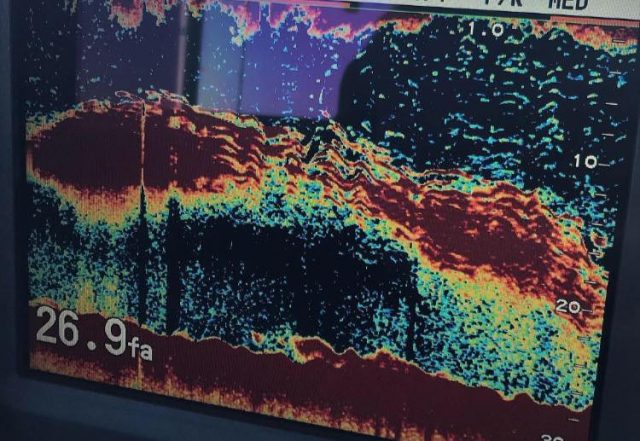 Lastly, you might want to take a chance on riding on the 3/4-day boats out of San Diego.  You don’t often get to rockfish on these boats because they are consistently the big yellowtail killers year in/year out.  There’s great structure the islands, but you’re rockfishing with a legit shot at getting into some yellows.  They have already had some pretty big hits this year, but again the inconsistent weather has the fish lock jawed.  Capt. Ryan Bostian of The San Diego has been posting a lot of pics like the one above from his trips lately.  Notice the big stacks of fish.  They are absolutely there.  When you see pictures from the boat’s fathometer (aka up/down) like this one where the fish are tightly packed, it shows a school that just isn’t in a biting mood.  When the squiggles on the screen are spread out it indicates feeding fish.  Hopefully, we’ll see more of the latter soon.
If you decide to go, be sure to bring some heavy yoyo gear (Salas 6x and 7x heavy, Tady 4/0) and heavy flatfalls.  That’s what was working last time it hit.  A few fish have even been caught on surface iron already, so I needn’t remind you that it’s always a good idea to bring that jig stick…just in case.
Lots of good potential out there.  It’s gotta come together sooner or later.  You won’t be on the breakout trip watching the fishing report from your couch.  Get out and fish!
Good luck if you get out there.
J
Joe Sarmiento
Joe Sarmiento is the founder and primary writer of the So Cal Salty blog. The blog covers saltwater fishing, primarily aboard the many sportfishing b...