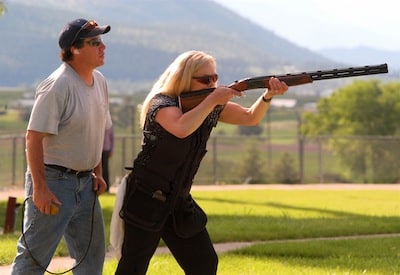 Each month Carrie Wilson, a marine biologist with the California Department of Fish and Game, answers questions sent in by outdoorsmen on a wide range of hunting and fishing topics. This month, Carrie tackles several questions including one about diving for abalone, what sort of ammo you can carry when duck hunting, silencers and whether it’s legal to bring booze on for-hire boats. Q: Is it legal to use noise suppressors (mistakenly called silencers) on rifles and handguns? I know that porting, venting, flash collars and muzzle brakes are okay to use at target ranges and while legally hunting in California. Can a noise suppressor that is attached to the front end of the barrel or slides over the front end of the barrel be lawfully used at a target range or while legally hunting anywhere in California? — Tony N.

A: No, stay completely away from silencers. It is a felony for any person, firm or corporation within the state to possess a silencer (California Penal Code, Section 12520). Upon conviction, punishment includes imprisonment in the state prison or a fine not to exceed $10,000, or both. A silencer is defined as “… any device or attachment of any kind designed, used or intended for use in silencing, diminishing or muffling the report of a firearm.” This definition and law also applies to any combination of parts, designed or redesigned, and intended for use in assembling or fabricating a silencer (California Penal Code, Section 12500).

Q: Earlier this season I was diving a low tide looking for big abs and I happened to find a 9-incher. He was really clamped down and a lot stronger than the clickers I’m used to. In the process of popping him off, the shell broke into pieces. Since I did not know the legality of keeping an ab with a broken shell, I had to leave it there. It haunts me every day. Did I do the right thing? — Jesse L.

A: First of all, as you probably now know, before trying to pop any abalone off their substrate, be sure to first insert the abalone iron correctly under the animal to be sure you have the appropriate leverage to pop the animal off without injuring it. If the animal is clamped down too tightly where you can’t get the ab iron under the animal correctly without harming it, then you should leave it alone and come back later once the animal has relaxed and you can remove it properly. A better idea would be to pursue another abalone that is not locked down to the rocks.

Regarding your situation, you did the right thing as the law requires that abalone are in a whole condition and attached to the shell. It is impossible to measure an abalone with a fractured shell and often the abalone is no longer attached to the shell once you fracture it. Next time try to leave a clamped-down abalone alone and choose another that may be more easily harvested.

Q: Why do most if not all boats for hire ban taking beer or liquor aboard? I have worked as a deckhand and fully understand the safety concerns, as well as what large amounts of space coolers full of beer for up to 70 people on a half-day trip might take up. What I am wondering though is whether there are any U.S. Coast Guard or Department of Fish and Game (DFG) laws against it that I can tell people who ask. Many of the anglers I’ve spoken with over the years get angry because they think the boat is just trying to make a buck. — Rob M.

Q: Some say if you are duck hunting on a refuge and you have some lead quail loads in the truck (because you’re going quail hunting on the way home in the afternoon), a game warden could ticket you for having lead shot in possession. Other friends say that as long as the lead shot is secured in the truck and not in your actual possession while hunting, then you’re not in violation. It seems to me this situation would be like the 25 shell limit in the field. As far as I know you can have additional shells in your truck as long as you only have 25 or less in your possession while hunting. If you run out then you can return to the truck for more. Who’s right? — Eric M.

A: You are right, Eric. As long as the lead stays in your truck, you should have no problem.

If you have a question you’d like to send to the DFG, visit californiaoutdoors.wordpress.com or email it to [email protected].

Q and A | From Target Shooting to Boats and Booze