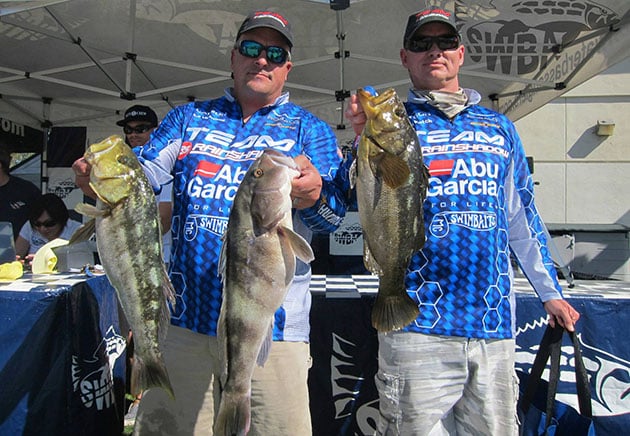 Becoming complacent is probably the biggest stumbling block we face as anglers. To make matters worse, the more success we experience, the more likely we are to become complacent and as a result our level of success decreases. The sad part is that we often don’t realize we’ve become complacent until it’s too late.

So what does this have to do with putting things together on the water? Well, to put it simply, the complacent angler often doesn’t put things together on the water. Rather than actively fishing, they’ll drive around with their head down, running to the spot where the fish were biting and throwing the same bait they always do. Then if they don’t catch anything, they assume the fish just aren’t biting.

Trust me on this; I speak from experience. 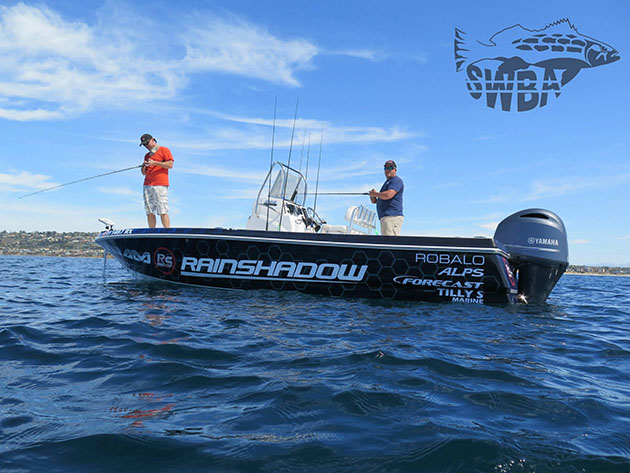 There were a couple of saltwater bass tournaments in San Diego on back-to-back weekends earlier this month and though I wasn’t aware of it at the time, my game plan was to go down there and be complacent. After all, I’d spent the last six years down there running to the same spots for the same mediocre results and I had no reason to believe that these tournaments would be any different. 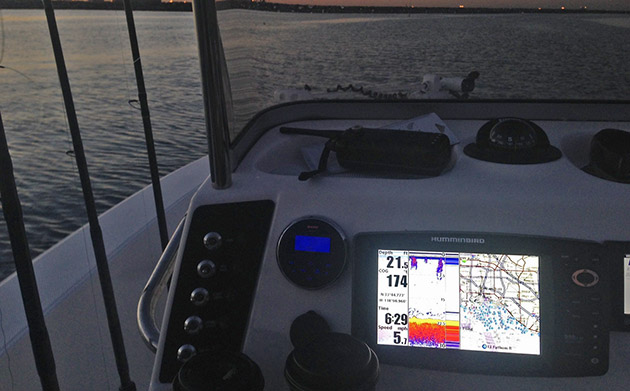 That all changed the morning of the SWBA event in Mission Bay when I turned on my new fish finder and realized that none of my San Diego waypoints had transferred from the old machine.

Since our entire game plan was structured around fishing deep-water structure, my partner Matt Kotch and I were feeling a little defeated as we waited for the tournament to start. After a brief conversation about scrapping our game plan and fishing kelp, we agreed to spend an hour or two looking around for deep-water fish before pulling the plug. With that we headed off in the general direction of where I remembered our starting spot to be.

All of us have a plotter full of waypoints these days and while having a machine tell you right where to fish is great, it also lends itself to becoming complacent.

You pulled up on a spot and the fish didn’t bite? Well, wind ’em up and head to the next waypoint. Do that often enough and you might as well be driving around with your eyes closed. 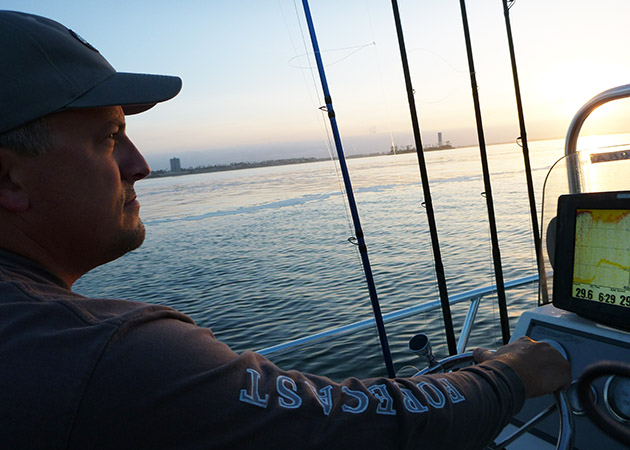 Arriving in the approximate zone of where I remembered an area of hard bottom and reef to be, I drove around and used my side imaging to find the structure. Once I found the first chunk, I boxed the area and found the next few sections. Comparing this to my memory of what the waypoint configuration was on my old machine, I was able to orient myself and begin fishing on the up-current edge of the structure.

What do you know? First cast on the Alabama Rig and I’ve got a double of a 4-pound calico and a 2-pounder. Matt connects on a swimbait after netting my fish and shortly after he slides a 3-pound sand bass into the net I’m bit again and this double puts us on a limit in the first 20 minutes of the tournament. The fish bit for a while and we culled several times before the bite dried up.

If I’d had my waypoints, I’d have picked up and headed to my next set of numbers. But without another set of numbers to run to, I decided to look around the area a bit. While doing so, I found several more small spots that I’d never fished and we continued to catch fish and occasionally cull one of our smaller bass.

Once we broke the 15-pound mark, the culls became harder to find and figuring we’d maxed out our bag in this zone we decided to move on. There are some artificial reefs just south of La Jolla Kelp that we usually fish and I had a pretty good idea of where one of them was oriented in relation to the pier, so we headed over to see if we could get on it. Luck was on my side as I ran the spot over within moments of pulling the boat off plane and with a little driving around by memory; we were able to find six more reefs.

While luck played a role in finding these spots, so did my paying attention when I was driving around in the past. Just because you’re running to a spot on your GPS doesn’t mean that you shouldn’t be looking around and referencing landmarks that relate to your position. Also, when you have spots that line up like many of these artificial reefs do, it’s important to get a visual reference in the direction they run. That way you can drive right to the next one, with or without GPS numbers. 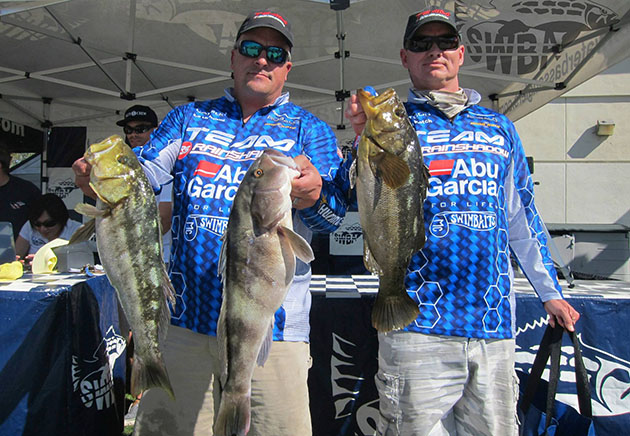 We were lucky enough to cull a few of our smaller fish in this zone and by the end of the tournament we’d managed just under 20-pounds of mixed bass. Our bag wasn’t enough to put us in contention for the win, but it did get us 5th place.

More importantly, by having to fish in the moment we avoided falling into the trap of fishing how we’d always fished.

There were several teams that were fishing the same zone the same way we normally would have and they struggled during the event.

The following weekend found me back in San Diego, this time with my friend Chris Oakes, to fish the SBS tournament. I was feeling pretty confident going into the event and just planned to follow the same game plan as before. Once the tournament started, it quickly became apparent that my game plan wasn’t going to work. 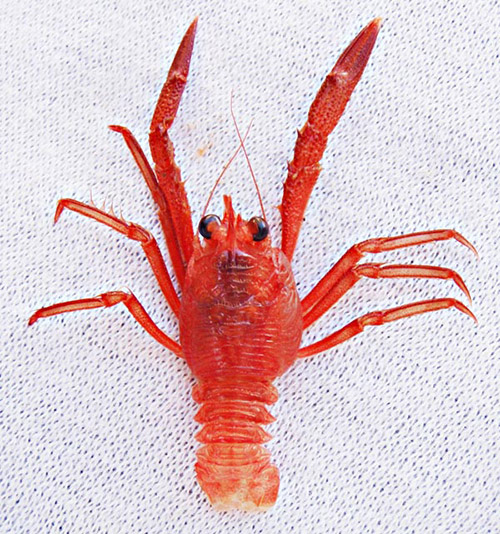 An influx of red crabs had the bass off the bite in our starting area and after an hour we didn’t have a single fish in the boat. My knee jerk reaction was to pull the plug and run up to the artificial reefs, but I decided against complacency and committed to spending some time trying to figure out what was going on. This didn’t work out all that well as we drove around trying different things but getting the same result; No bites.

Finally, I found a school of mackerel that were crashing on red crabs and to my surprise, the calicos were right there with them. This translated into a 15-minute flurry and a limit in the tank. Something changed and the bite window closed. I’m still not sure what it was, but at a certain point the area just stopped feeling fishy.

Taking this as our cue to make a move, Chris and I ran up to the artificial reefs to find more red crabs and insanely clear water to go with them. Reefs don’t normally bite well on bright sunny days with 30-foot visibility, but we hammered away trying different baits and techniques until we got our first bite. That bite told us a lot. It came off a long cast into the sun to a reef that we hadn’t drifted over yet and when I swung and missed the fish, another one immediately hit the bait. This fish stuck for a second before coming off and I was instantly bit again. This time I slid a three-pound sand bass into the net. 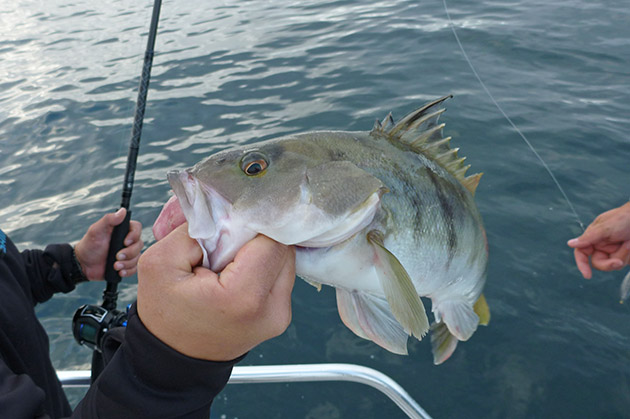 Chris and I took advantage of this bite for the next hour by making long casts to spots that might or might not have schooling sand bass stacked mid column. It took a lot of casts to a lot of spots, but we were able to catch a dozen bass before the bite dried up. With a couple hours to go and no biting fish, it would have been really easy to just go through the motions while waiting for the buzzer.

But being on a complacency-avoidance kick, I kept looking and Chris kept fishing hard. Finally with approximately 15-minutes left, we found one more biting zone and Chris was able to cull twice before we had to run for the weigh in. Though smaller than the previous week’s bag, our 16 and something pounds was enough for fourth place in the event. 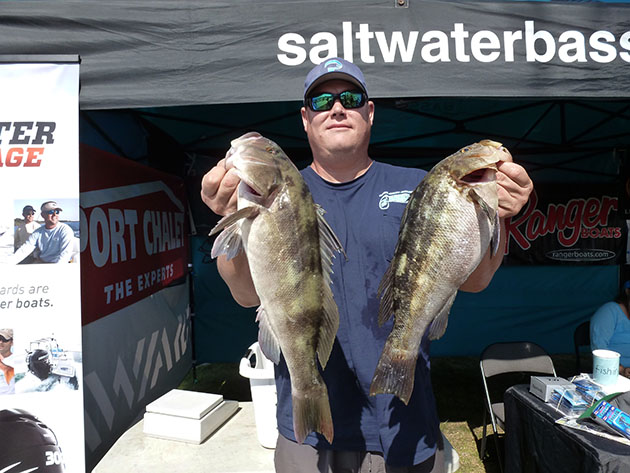 So what’s the take away from this long story? Well, without our waypoints we were forcibly removed from our complacent fishing pattern and it paid big dividends.

But you don’t need to erase the memory of your plotter to go out and catch fish.

Whenever you’re on the water and the fish don’t seem to be biting, check in with yourself and see if you’re not getting bit because you’re being complacent. There are always fish biting somewhere, so use the slow fishing as an excuse to work on improving your understanding of the fishery.