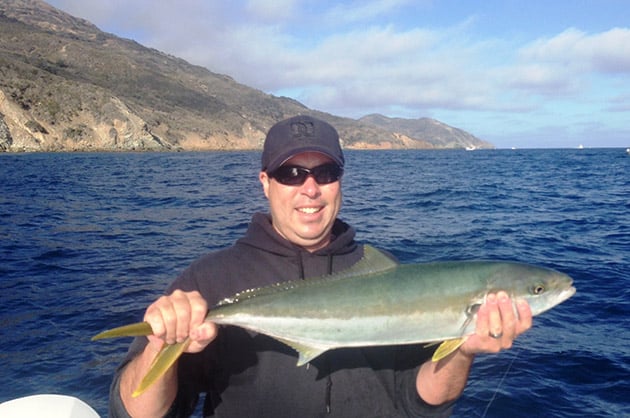 The yellowtail bite at Catalina is the best it’s been since the 1998 El Nino and with fish scattered from the east to west ends, along both the front and back side of the island, it doesn’t look like the action will slow down any time soon. Despite the volume of fish, there have been many reports from private boaters who have either struck out at the island or only ended up with a couple fish for their efforts. While some of these unsuccessful trips can be attributed to the yellows not biting on that day, most are due to the other species at the island biting too well.

Everything is biting at Catalina right now and biggest issue facing private boaters is that the ratio of yellowtail to other species is very low.

This means that if you anchor up on one of the stock spots along the island and try to catch yellowtail you’re probably going to burn through all of your bait on calicos, bonito and barracuda. Luckily there are some things you can do to cut down on your bycatch. 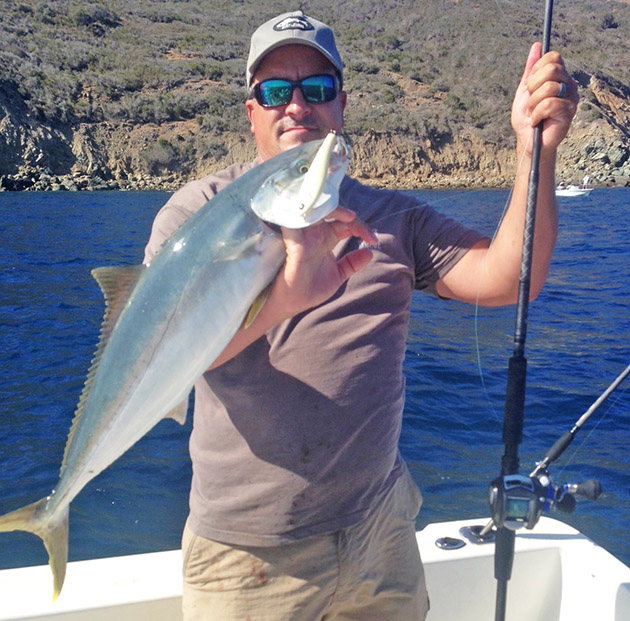 Take for example the trip I took to Catalina last week with my friends Chris Oakes and Scott Smith. Our plan was to fish yellowtail on the west-end, front-side of the island, so we stopped at the bait receiver to pick up a half scoop of sardines. Chris warned me that sardines don’t do all that well in his tank, so we stopped and snagged a dozen mackerel to round out our bait supply.

We took it easy running across, but the early west wind had the boat pounding a bit and by the time we reached the island most of our sardines had died and the remaining ones looked like extras from Night of the Living Dead. Our mackerel faired better, but weren’t looking all that happy, so with 40 or so baits in the tank, we were on a pretty strict ration. Not having a specific spot in mind, we decided to look around and see if we could find some yellows. 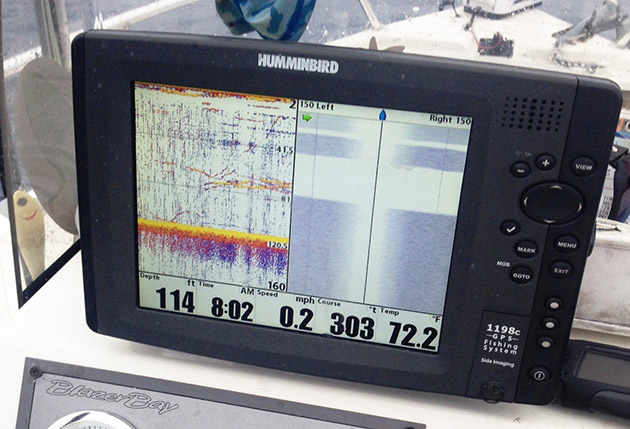 When feeding, the yellowtail on the front side of Catalina will usually cruise the 15-fathom ridge that runs along the island. In most areas, the bottom drops off more steeply out past that edge and I assume the fish hang around there because it gives them access to bait schools that come out of deep water as well as those up against the island. Whatever the case, the fish were there that day and within seconds of beginning to slow troll one of our horrible looking sardines we had our first bite of the day and our first yellowtail in the boat.

Slow trolling a sardine is a great way to find yellowtail at the island, but as we soon found out, it’s also a great way to find bass bonito and barracuda. We resolved our bycatch issue by slightly increasing our trolling speed and not letting the boat venture into water shallower than 85-feet. This resulted in us getting several more singles and doubles on yellowtail as we continued west. After a while, we stopped getting bites, so we wound them in and headed back to the spot where we had gotten our last bite and started trolling in the other direction.

We caught several fish trolling in the new direction but eventually drove out of them again. This helped us to narrow down the area that was holding biting-fish and we spent the rest of the morning concentrating on the area between our most easterly and westerly bites. This ended up being a half-mile stretch between two major points. I’m not sure why the fish were right there, but I guess it doesn’t really matter.

Since most of our bites came within a small section of that half-mile stretch, we decided to make a drift through that area. That drift resulted in a couple more singles, a double and even a triple hook up. We repeated that drift several times and when we ran low on bait we switched to throwing the wax wing, which produced several fish. An hour later we were out of bait but managed to get twenty yellows in the few hours we fished.

While the yellows were on the small side and it wasn’t exactly a barn burner fishing-wise, it was satisfying to have our strategy work out. While everyone fishes differently and actual results may vary, if you follow the same steps we took on Saturday, you’ve got a good chance at catching some yellows at Catalina right now. In case you missed it, here is a cheat sheet for your next trip.

Bring bigger baits: Sardines are good but mackerel is better, so spend the time snagging more, I wish we’d have left the sardines at the receiver and brought a tank of mackerel. 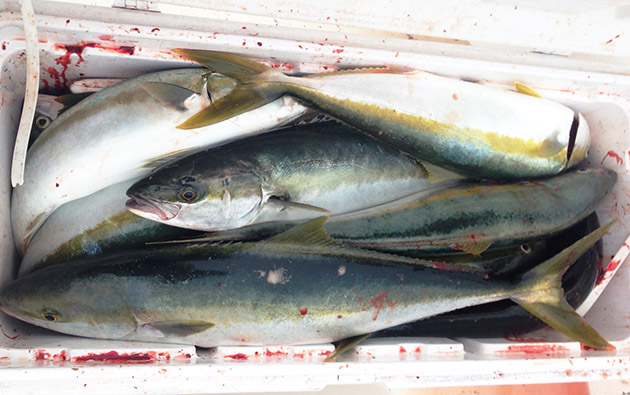 Find fish that aren’t on spots: The bycatch is wide open at Catalina right now and if you fish one of the kelp beds or reefs you’re going to burn through a lot of bait while waiting for the yellows to come through. We avoided those areas and turned our forty baits into twenty fish.

Define the expanse of the area you’re fishing: By slow trolling up and then down the island we were able to determine where the fish started and stopped. This allowed us to focus our energies in a high percentage area instead of driving blindly on. On the same token we figured out that when we got too shallow our bycatch ratio went up. So, we were left with a preferred depth and a defined bite zone. 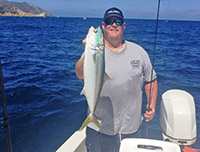 Figure out what else they’ll bite: We didn’t wait until we ran out of bait to start throwing jigs and wax wings. Instead, I tried different things while Chris and Scott fished bait. Their catching fish on bait gave me the confidence that there were feeding fish in the area and motivated me to keep throwing a lure. Had I waited until we were out of bait, there would have been no way for me to know whether or not there were actually any biting fish in the area and I probably would have given up before I got my first bite.