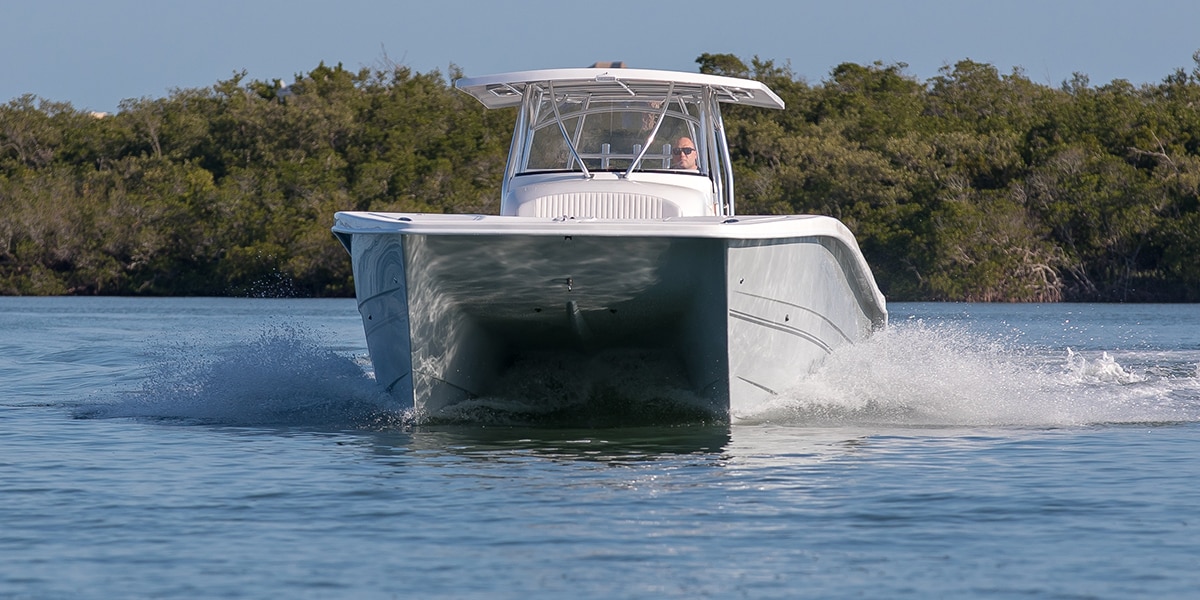 Power catamarans have a cult-like following among some anglers, yet have never managed to come close to the popularity of monohulls. Here’s why so many people love ‘em, and why so many don’t.

If you had to choose the hottest new headline-grabbing fishing boat to hit the water in recent years, one model that would certainly be in the running is the quad-engine Freeman 42LR power catamaran. Yet despite uber-popular boats like this, power catamarans have never managed to occupy much more than seven or eight percent of the new boat market in the United States. What gives? How can a power cat design be so dang popular in some quarters, while on the whole monohulls continue to dominate? A close look at the good, bad, and ugly traits to twin-hulled boats tells the story.

Before we go any further, there’s one thing every angler needs to remember: just as no two monohulls are exactly alike, no two power cats are, either. While some basic traits can be painted with a broad brush, each and every boat is different. Between manufacturers there’s a huge range in quality, and between models and designs there’s a huge range in performance,fishability, and price. 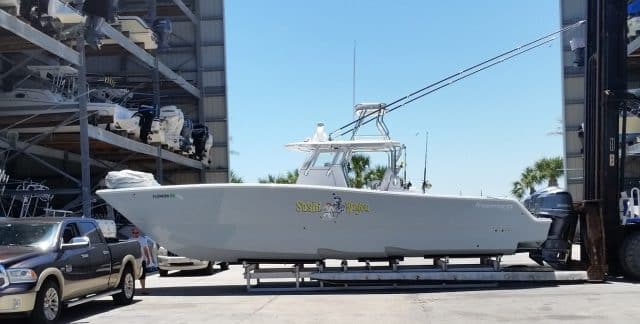 A well-designed powercat can ride significantly smoother than a monohull of the same size and weight, moving through the same sea conditions, at the same speed. Remember, all boats are different and there are certainly some monohulls that run more smoothly than some powercats. That said, however, a cat hull can be designed and built in such a way – usually by trapping a cushion of somewhat compressed air between the hulls, as well as by providing two sharper entries versus one wider one – that it softens the blows of wave impacts. (The video Boating Tips: Why Do Powercats Tend to Run Smoothly shows the basics of how it works). And before anyone cries “foul,” note that this is not a theoretical notion. It’s been objectively proven with cold, hard data.

Boating Magazine (back when this author was on its staff) ran accelerometer tests on a 26-foot Glacier Bay powercat and a 26-foot-deep-V Regulator at the same time, in the same place. Both boats are known for a smooth ride, but the catamaran decelerated more slowly (0.287 seconds versus 0.081 seconds on average) and with less force (three Gs versus four Gs) when hitting identical waves simultaneously. Anyone who’s spent significant amounts of time on a well designed and built power catamaran won’t be surprised by this difference. It does not, of course, tell the entire story, nor does force of impact alone determine long-term comfort aboard. But more about that later – because there’s more “good” to look at before we dig into the catamaran down-sides.

With the bulk of their weight widely spaced to either side, cats also enjoy enhanced static stability. Walk from one gunwale to the other, and the boat rocks and rolls less than on an average deep-V. An added bonus of having those two hulls spaced far apart comes at the dock, when you oppose the engines. Unlike many twin-engine V-hulls powered by outboards, the props are widely-spaced and opposing the engines has a dramatic effect.

Another high-point for power cats is efficiency. This varies a bit more than the other factors depending on weight and design, but generally speaking it takes fewer horses to power a catamaran, and they often get 10 to 20 percent better fuel economy as a result.

Finally, since they carry their full beam all the way forward powercats have a lot more deck-space for the equivalent LOA. This is especially noticeable when anglers can utilize the bow, such as when light-tackle casting or drift fishing, since a 22’ powercat may have as much room forward of the console as most 26’ monohulls. Wait a sec – powercat owners get to enjoy yet one more perk while drift-fishing, too, since cats tend to drift beam-to while most outboard-powered monohulls drift stern-to. But, there’s a catch…

Leaving off on drift fishing is a perfect segue to the first down-side of catamarans you need to consider: the possibility of a snap-roll. That enhanced static stability a cat enjoys can be problematic in a beam sea, because when it’s thrown into a rolling motion by a wave, physics demand that the boat right itself asap. That creates a very fast, jerky, abrupt roll period on some catamaran designs. Remember, each boat is different and some cats don’t display a snap-roll at all. But on others, the motion is quite uncomfortable and this is a potential trait anyone shopping cats should be on the lookout for.

Another prevalent cat con is leaning outward in turns. While monohulls bank inwards, some cats do the exact opposite in tight turns and leave you feeling like an egg sliding across a griddle. This can often be mitigated by trimming the inboard engine down a bit as you initiate the turn, but it takes some foresight and thoughtfulness.

Many cats are also relatively poor weight-bearers. They may perform one way when run light, but when loaded for a full day offshore with a big crew, display very different running characteristic. As a rule of thumb, deep-Vs are affected much less by heavy loads.

Finally, there’s “sneezing” to contend with. A few of the powercats out there will blast a puff of spray forward out through the tunnel when they hit a wave. Some models only do it at high speed, some only do it at slow speed, some do it at both, and some don’t do it at all. But when you’re boat shopping, again, this is a possibility you should be aware of and on the lookout for.

Where it gets ugly is when you’re looking at a poorly designed or poorly built power cat. In this case, you may well enjoy none of the usual powercat advantages, while suffering from all of their disadvantages. And naturally there are all levels of boats in-between – some that have great performance in a head sea but god-awful snap-rolls in a beam sea. Or they may pound your fillings out in a head sea but have excellent stability in a beam sea. Once again, remember, as with any type of boat each model will be different and must be assessed on its own individual merits.

For some people power catamarans will prove the better choice, but for others, a V-hull is the way to go. Someone with a bad back, for example, who simply cannot take the constant pounding of running a monohull into a head-sea, will likely be better served by finding a catamaran that can smooth out the blows. But if you can’t stand getting a face full of spray on rough days and that smooth-riding cat you chose happens to be a sneezer, you’ll wish you’d gone with a monohull.

When all is said and done the cat-versus-monohull argument boils down to preference – just like almost everything else regarding which boat is best for you, personally. And there’s only one way to settle this argument for yourself: sea trials. Lots and lots of sea trials, on different models in different conditions.