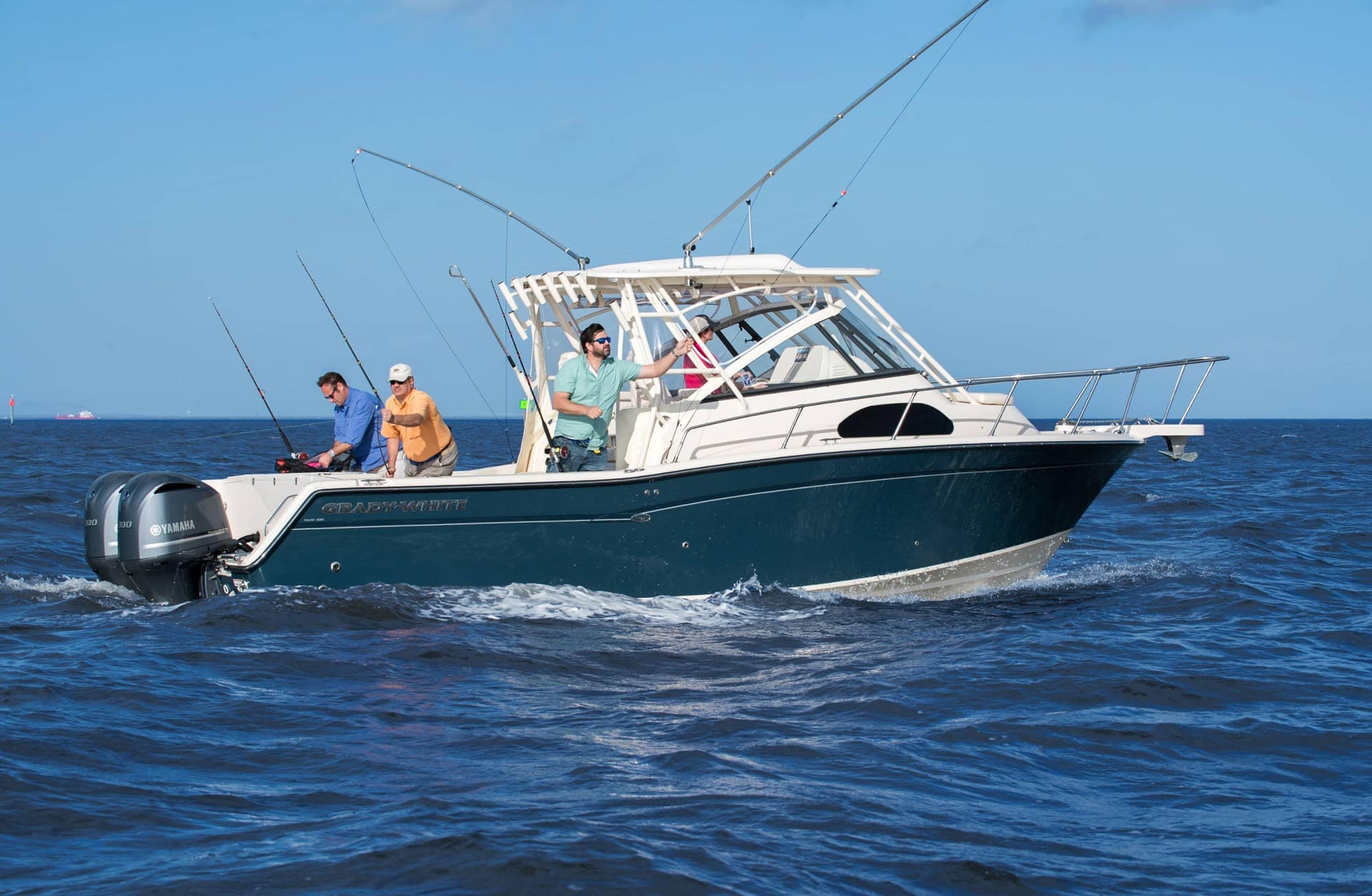 When you want an outboard boat with a cabin, it will come down to choosing between a pilothouse, cuddy cabin, or walkaround.

Let’s say the bluefin bite is going off around San Clemente Island, and you get an invite from three buddies who have fishing boats of an identical size. One’s a pilothouse, another is a cuddy cabin, and the third is a walkaround. All other things being equal, which one would you rather be on? Is any one of these designs better than the others? And if you’re looking at a new fishing boat for yourself, how would you decide which to pick?

Pilothouse boats like the Parker 2820 or the Defiance 290 have full rigid enclosures over the helm and passenger’s seats with a cabin forward. In a few cases you’ll come across boats that have no forward cabin or a very small one, with the enclosure surrounding just a centered helm, but these are relatively rare in today’s market.

High Points: Pilothouses are incredibly popular among anglers who make long runs through all sorts of weather because they surround you 360-degrees in a stand-up cabin. Almost all have some level of overnight accommodations for those long multi-day fishing trips. And having that full enclosure also means you arrive to the fishing grounds dry and comfy without having to wear your bibs, boots, and jacket at every moment.

Low Points: With that big cabin up front, it can be very tough to follow a fish 360-degrees around the boat. The side-decks are usually quite narrow and difficult to navigate – especially with a 50-pound tuna ripping drag from a rod you’re clutching with one hand, while the other hand is wrapped around a grab rail to keep you from going into the drink. On small models, the cabin can be cramped with more than a couple-few anglers aboard. Also note that in a dead wind, it can grow quite stuffy in a pilothouse when you’re not running.

The Bottom Line: These boats offer the ultimate in protection at the helm, and are often the top pick for anglers with a weather-be-damned attitude.

What’s the difference between a cuddy and a walkaround? Historically, one usually looked to the side-decks for an answer. Boats with deep side decks molded in would be called walkaround, while those with flush side decks and small cabins forward were commonly cuddies. The term “cuddy cabin” has fallen out of favor among the fishing crowd in recent years, however, and you’re likely to see most models tagged “walkaround” whether that’s most accurate term to use or not. (If you visit Discover Boating’s Boat Finder and read up on both, you’ll notice there’s essentially no distinction made but most boats listed as cuddies are runabouts, while most listed as walkarounds are fishing boats).

High Points: Cuddy cabin and walkaround boats have the helm located aft of the cabin, usually with the cabin’s aft bulkhead also serving as a starboard-side steering station. This makes it easier to enjoy the sun and salt spray on beautiful days, while still providing the protection, sleeping accommodations, and privacy of a cabin when you need it. In some cases, cuddy boats will have a hard-top, and in most others, a Bimini top that can be erected when the weather goes south.

Low Points: When the weather is snotty, few cuddies have aft protection. Plus, even with the bimini up and clear canvass connected to the windshield to protect you forward and from the sides, spray and wind is likely to get through at the seams and zippers. Many cuddies also have very narrow sidedecks that make it tough to get forward, while those with deep side-decks have to sacrifice some cabin space to integrate them into the design. In either case, center console boats still have the upper hand when it comes to 360-degree fishability.

The Bottom Line: Those who enjoy feeling the sun on their skin and the breeze in their hair – but also need to have the protection of a cabin from time to time – often like the cuddy cabin boat’s open-air environment.

So, which of these styles is “best”? You already knew there’s no correct answer, right? Different boats are best for different folks, so that’s a call only one person can make – and that person is you.