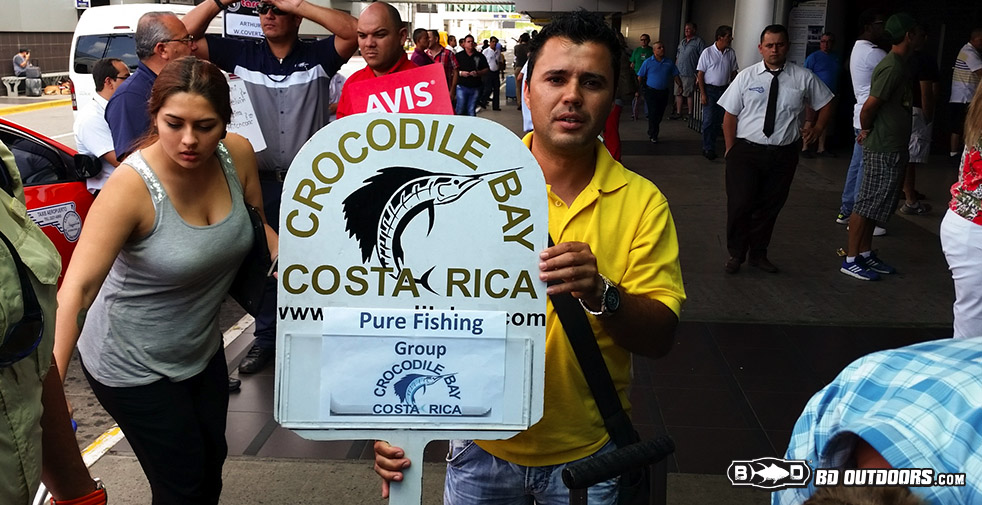 Recently, Penn Fishing put together a diverse group of fishermen who are all involved with outdoor media and we gathered at Crocodile Bay Resort in Costa Rica.  Travel was a cinch for some, while others underwent a pilgrimage from as far as Australia. 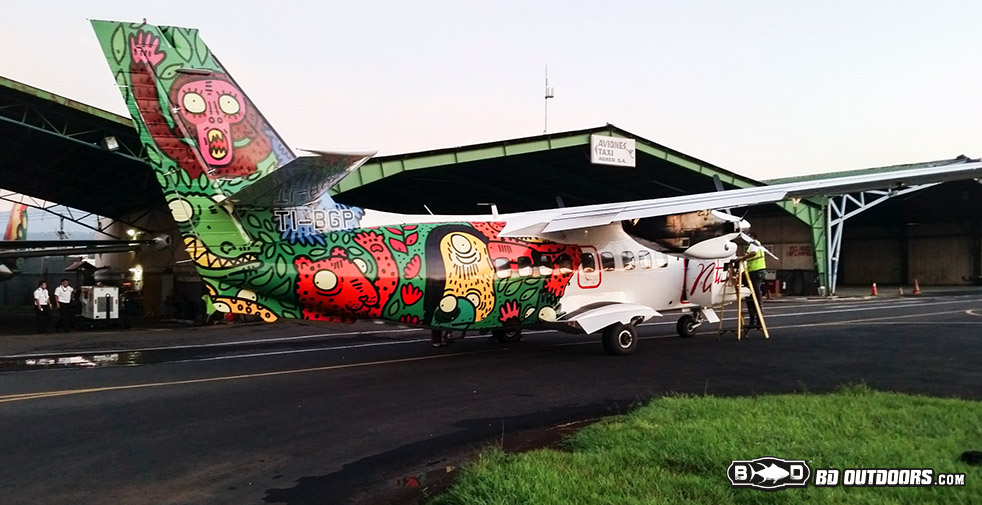 All visitors fly into San Jose, the capital of Costa Rica and then take smaller flights to more local destinations.  We flew to Puerto Jimenez airport which is no more than a stones throw to Crocodile Bay Resort. 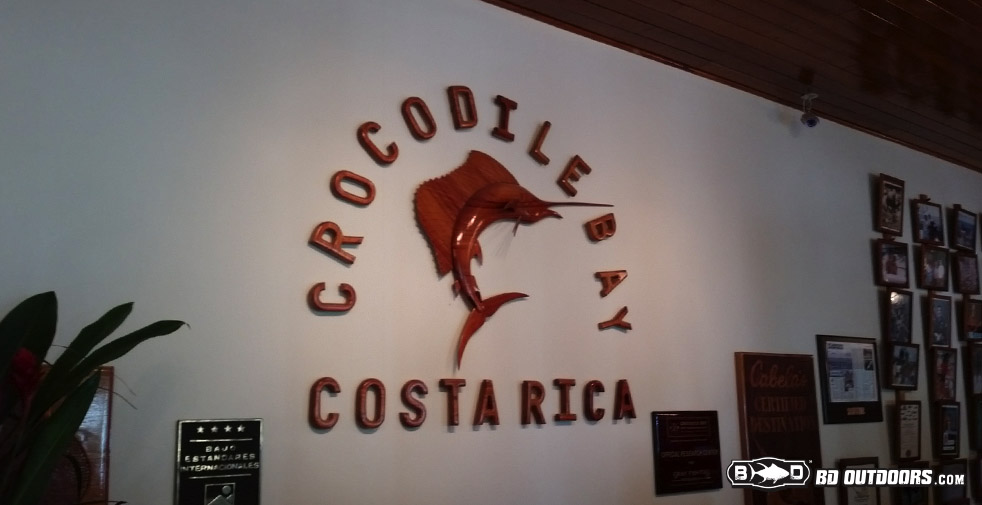 As the schedule worked out, we arrived early the first morning. The helpful swarm of staff helped us fill out our paperwork for fishing licenses.  It was all laid out and while we had a great breakfast, they generated our paperwork like a well-oiled machine. 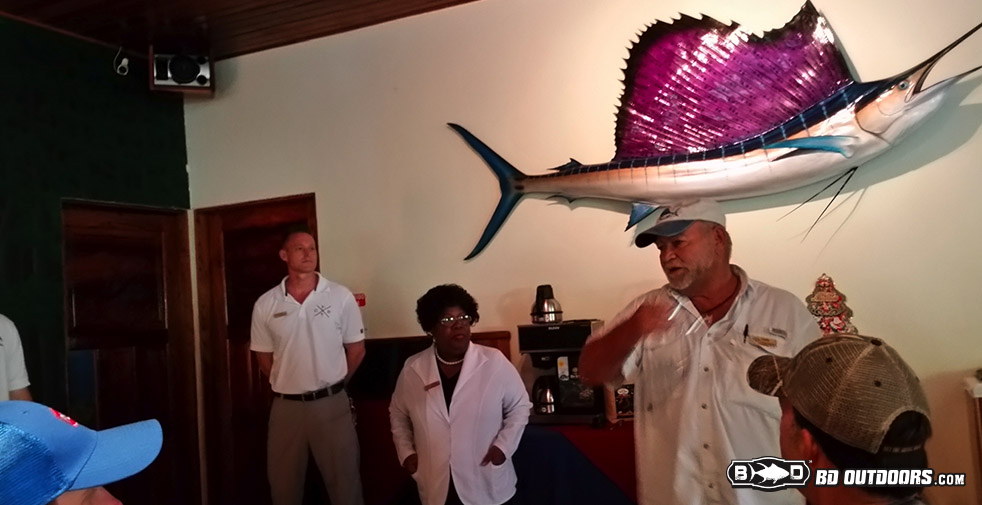 The owners and crew of the resort gave us the warmest of welcomes.  Todd Staley, resident Fishing Director, gave us the lay of the land and sea and pointed us to the boats. 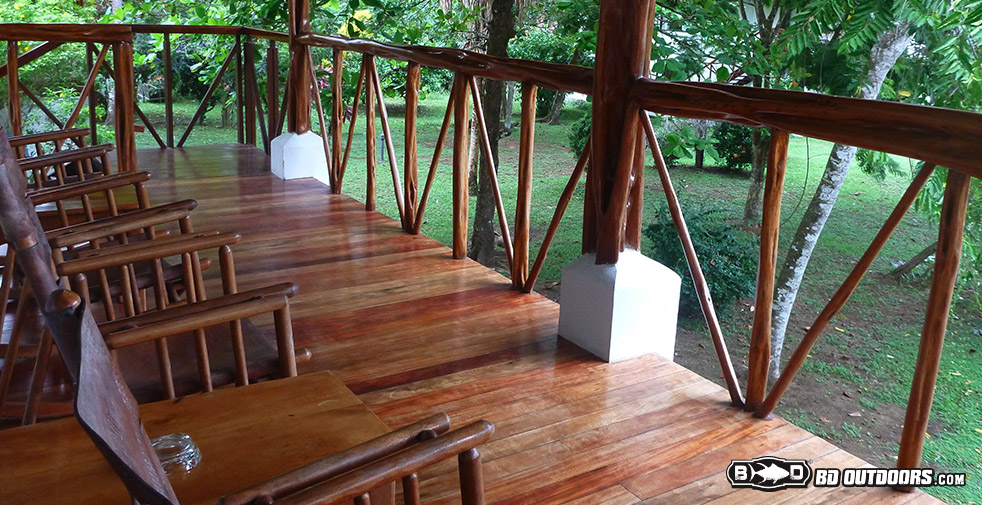 The rooms were immaculate and the grounds offered a tropical view in all directions.  Toucans flew from tree to tree and orchids were blooming. It made it hard to leave, but off to the boats! 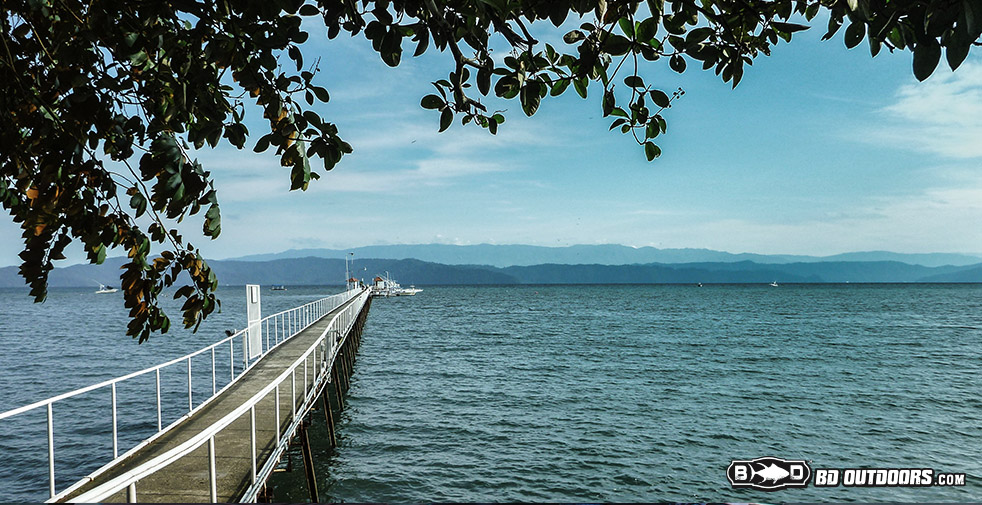 A short hike down the dock led you to the Golfo Dulce or “Sweet Gulf” which was no understatement.  The mountain view mixed with ocean smells will mess with a Florida boy’s head. 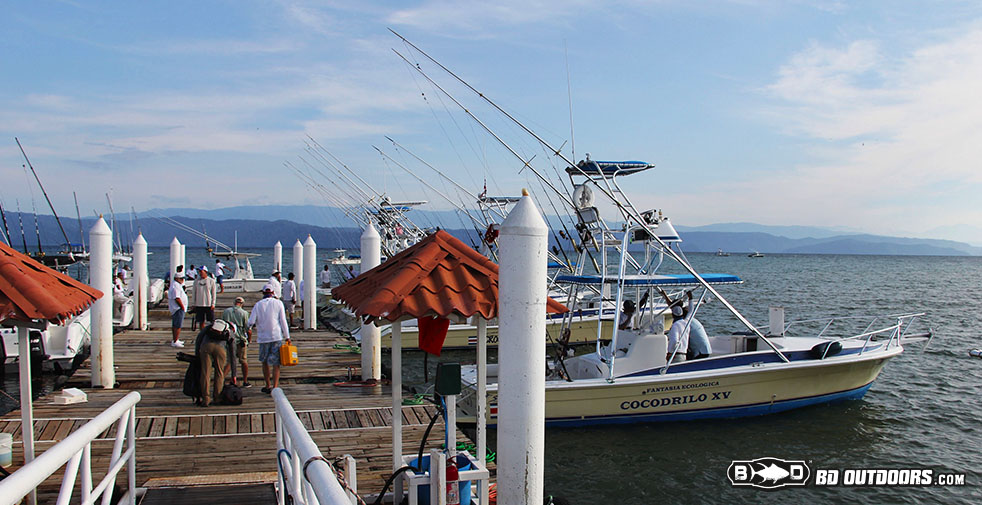 The Crocodile Bay Fishing Fleet was waiting for us and the dock was a buzz as diesels warmed and crew members welcomed their anglers for the day. 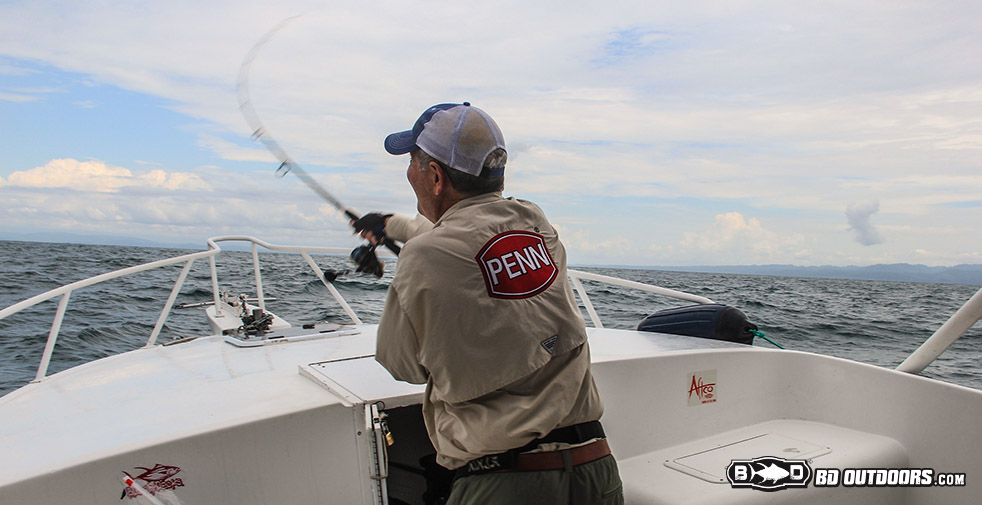 Steve Carson of Penn takes a shot with the new Penn Clash spinning reel, which was the reason we were all there.  To give this new spinning reel from Penn a workout.  The Clash took everything in stride and is really smooth. 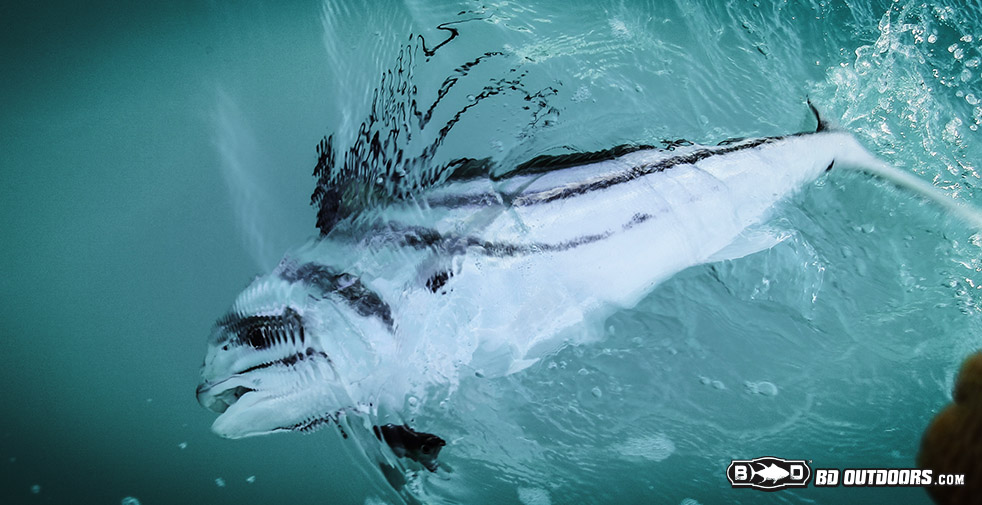 Just ask this roosterfish what he thought of the ultra-smooth drag of the Clash and the persuasive power of the Penn Carnage II rod. 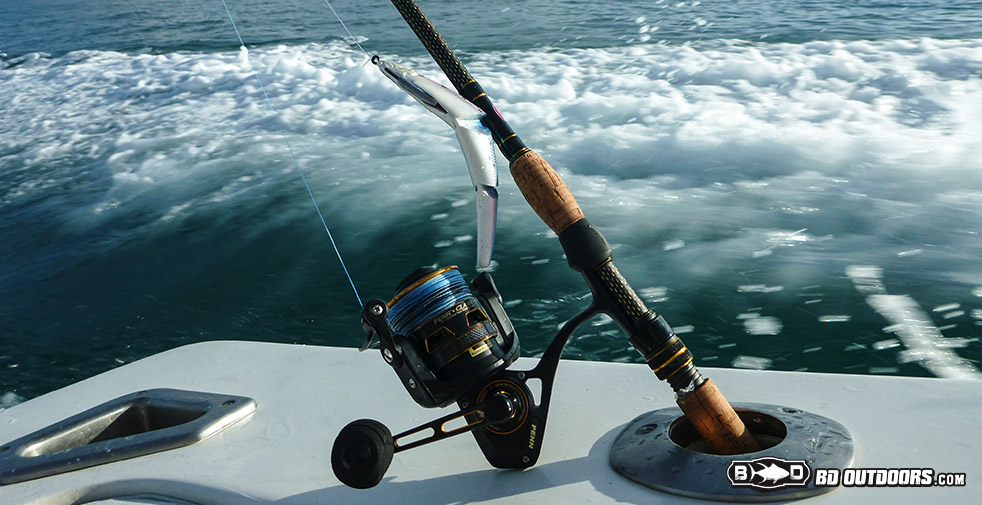 We were also lucky to get to sling the Sebile Magic Swimmer (soft version) lures.  They have an incredible swimming action and have been improved for an upcoming re-introduction to the market at an amazingly affordable price. 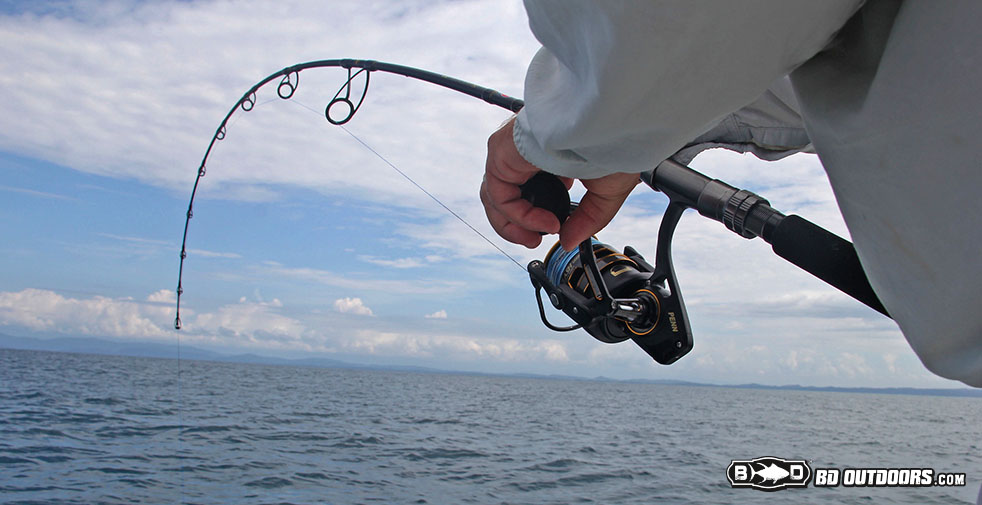 The Penn Carnage II spinning rod is an excellent match for the Clash reel and both come in the full range of sizes to catch any inshore or offshore species. 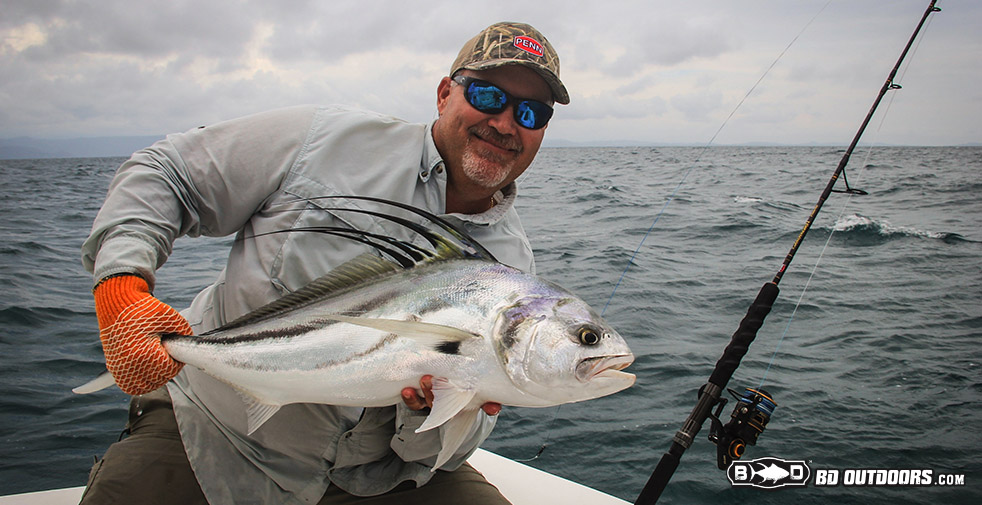 This roosterfish chased down the Sebile Stick Shad near the surface.  Nothing compares to seeing the rooster’s crazy dorsal fin pumping out of the water as he chases your lure. 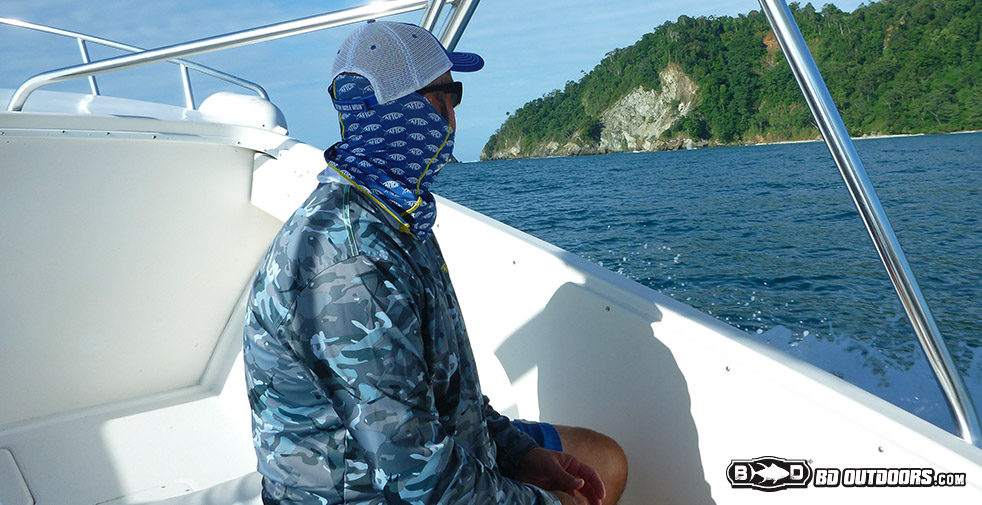 The ride to the fishing grounds goes quickly because the view is epic.  The jungle grows right to the cliffside and then falls off into the crashing swell and rocks. 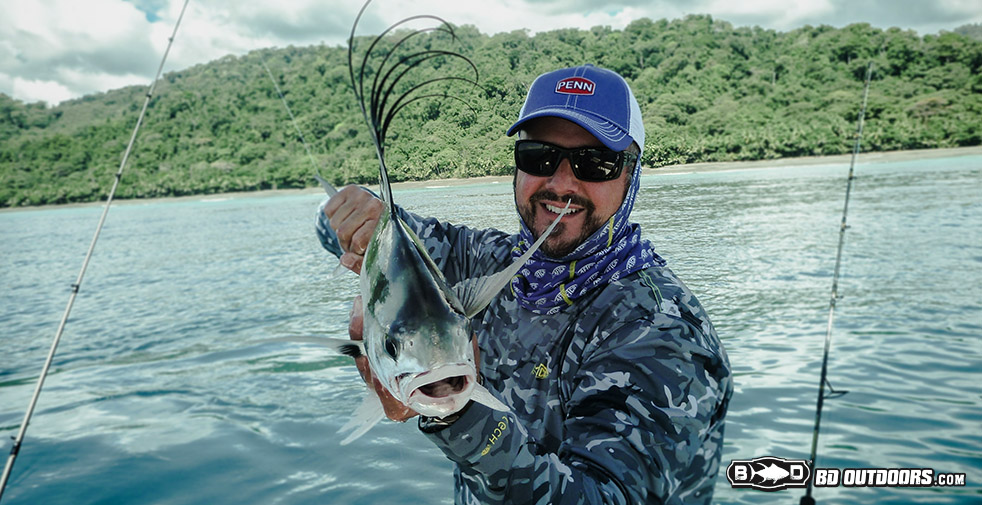 Ali of BD Outdoors offers up another “rooster” for the camera before a clean release.  This one ate a live bait slow trolled along a rocky reef. 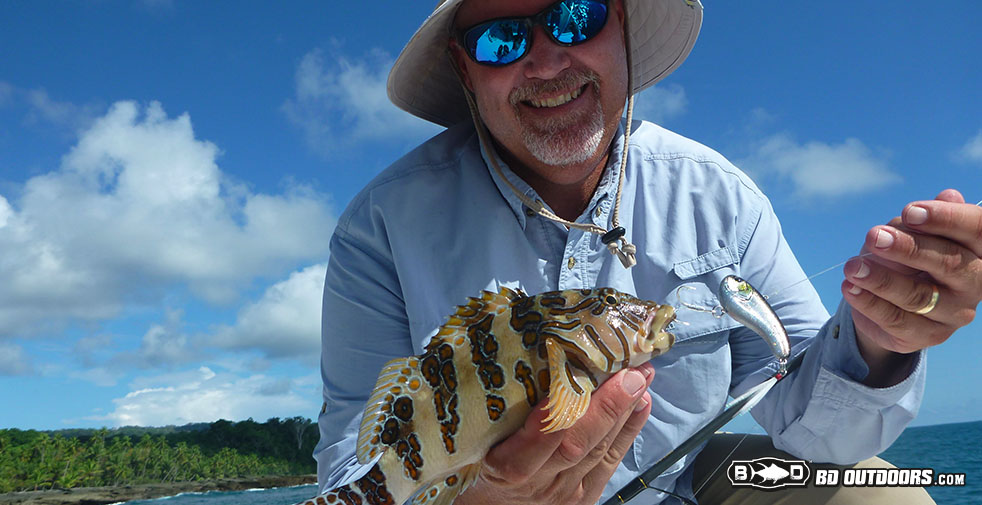 One of the most exciting aspects of fishing a new destination is the opportunity to catch the unexpected.  This hieroglyphic hawkfish had to have this Sebile lure as it went by his rock. 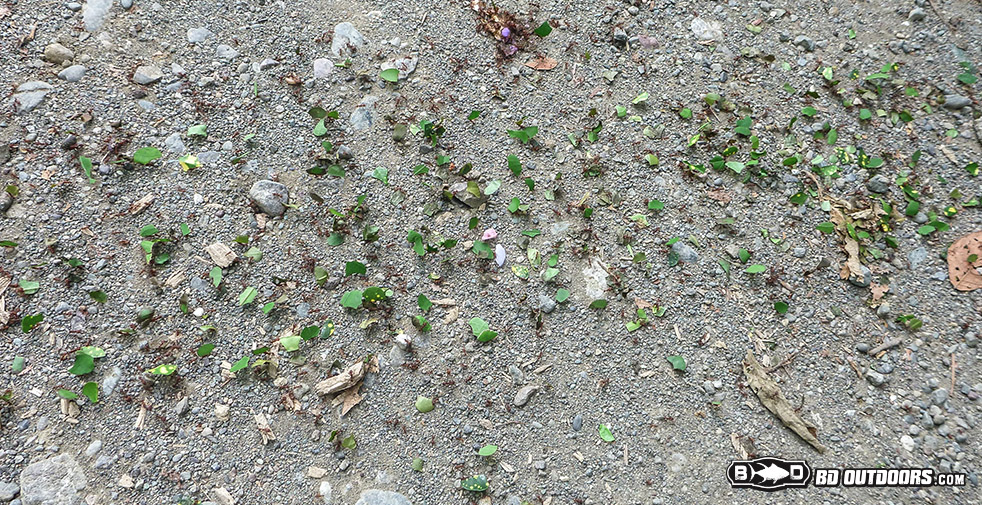 In the Osa Peninsula of Costa Rica, the land contains one of the largest examples of biodiversity on the planet.  These leaf-cutter ants are taking back their harvest to grow fungus below ground. It is all they can digest, so they are farming it. 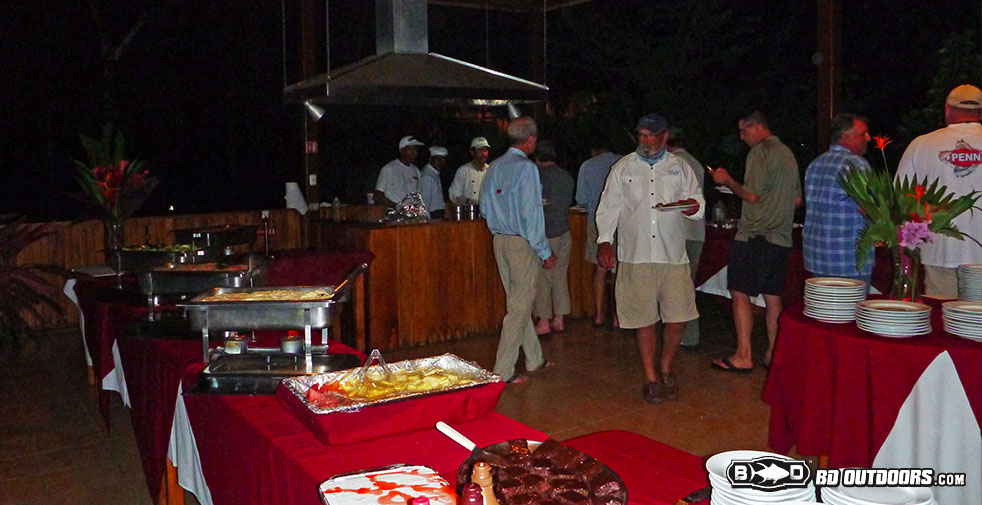 The ants weren’t the only ones making a trail to the food, the food and service were excellent and no one went hungry for sure. We enjoyed hearty meals of fresh fish, steak, side dishes, tropical fruit and desserts. 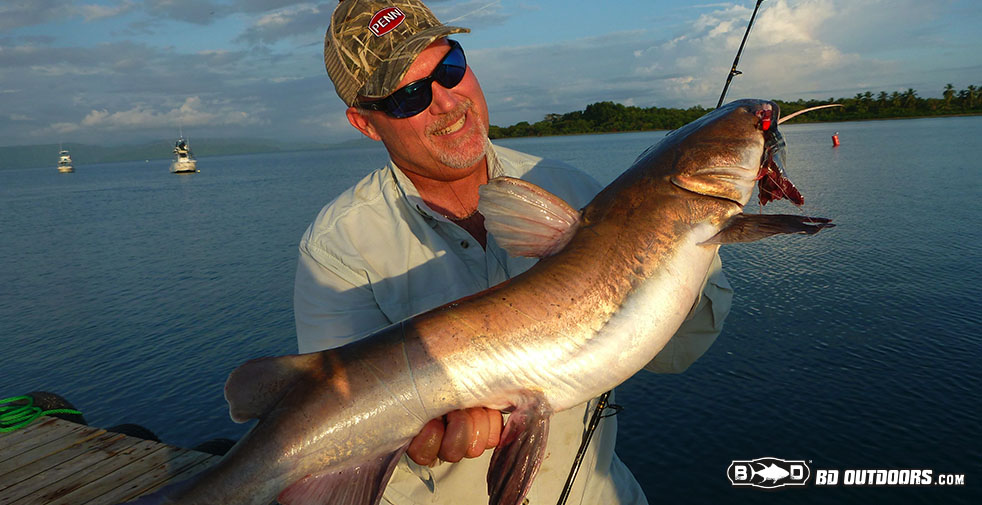 I watched Patrick Sebile catch a strange catfish off the dock one morning.  I could not wait to get in and try to catch one.  Success was sweet and I still do not know what species it is. Part of the adventure! 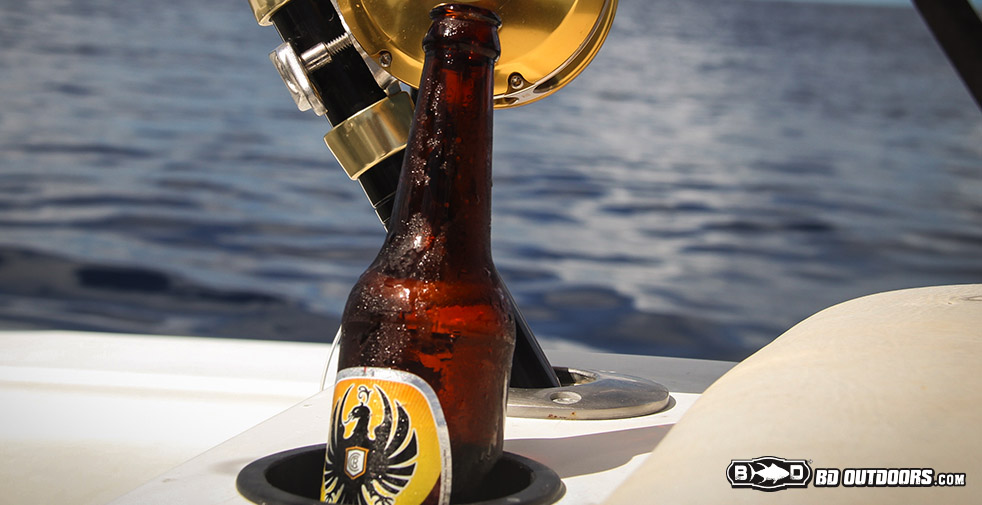 It was abnormally hot, even for Costa Rica, so it was important to stay well hydrated while waiting for the bite. 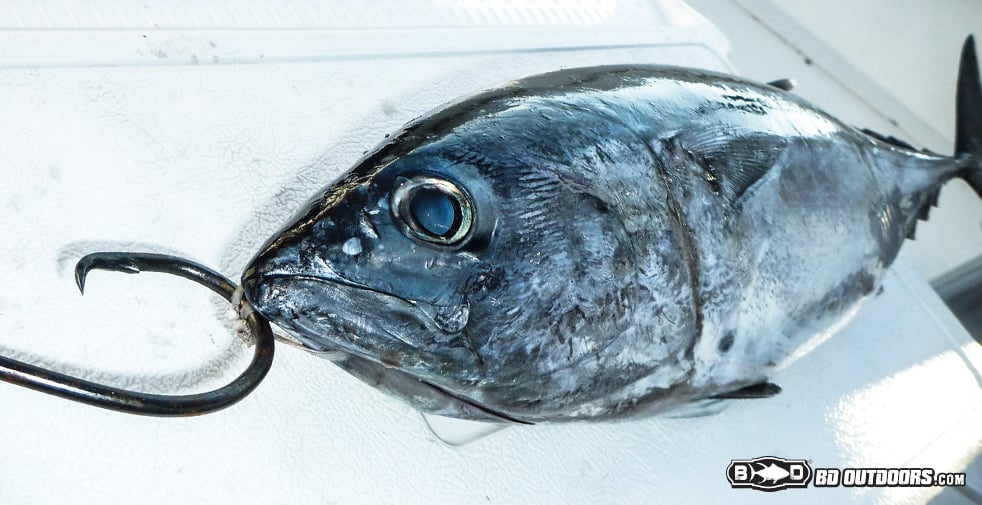 On day three we headed offshore to fish for marlin.  We used both live and dead bait consisting of small tuna and bonito.  A bridled Mustad circle hook is ready for the task. 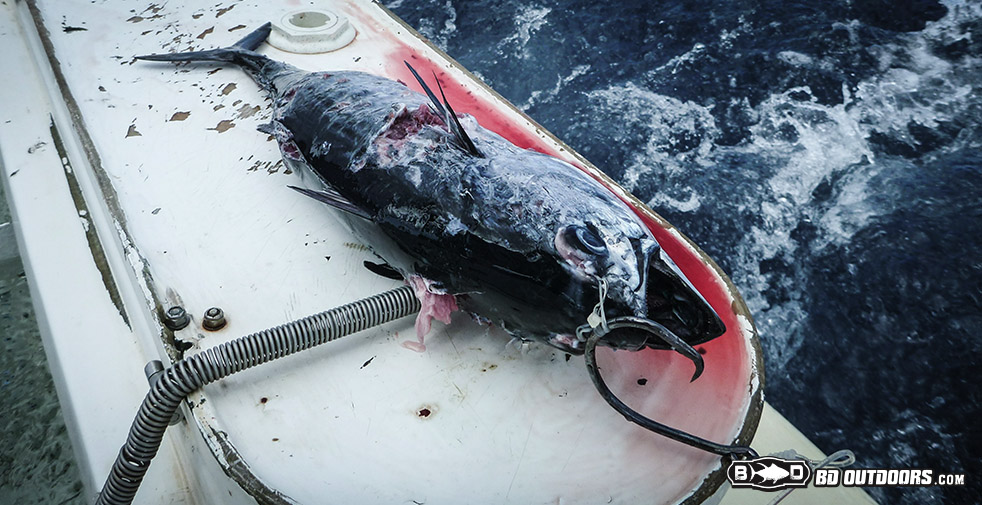 The rigger popped and we dropped it back, but the spouting dolphin deflated our hopes and our live bait.  A dolphin, the mammal kind, grabbed the bait four times in an attempt to pull it free of the hook. 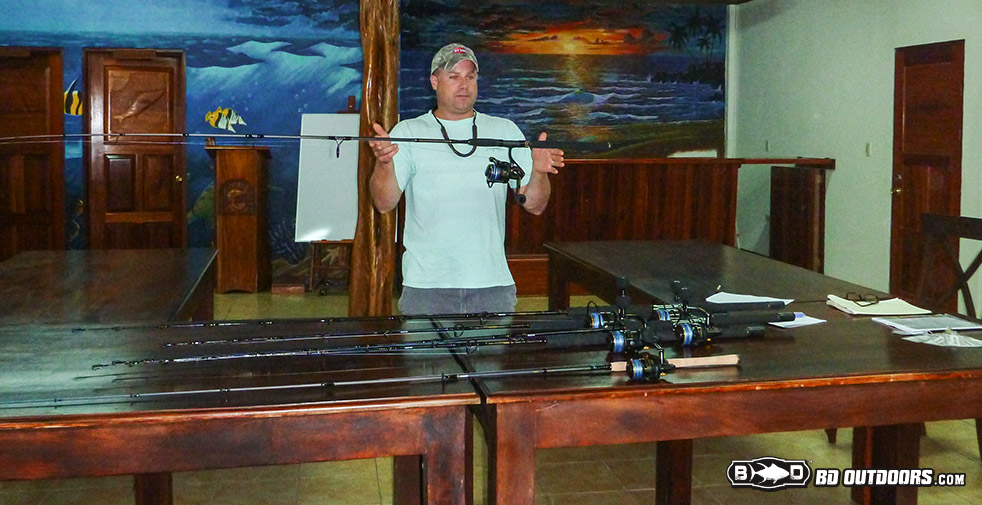 Mike Rice, Penn’s Product Manager, gave us the rundown on the new Clash reels.  Stainless gears make the Clash last during the punishment of modern-day jigging and popping with braided lines. 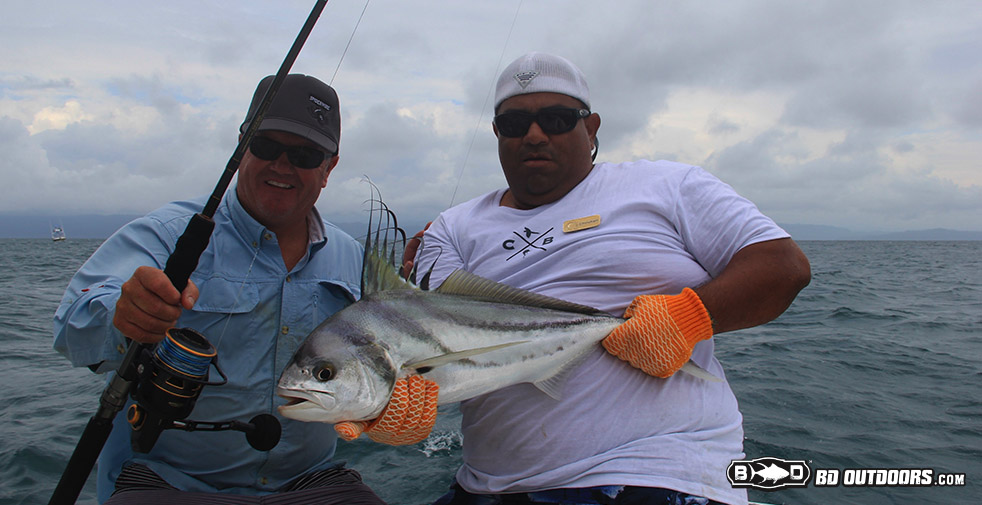 The Clash spinners were spooled with the brand new Blue Camo SpiderWire.  In six days of fishing I only had one small wind knot. That is proof that this is a winning combination.  Bob Hoose of Penn with another rooster. 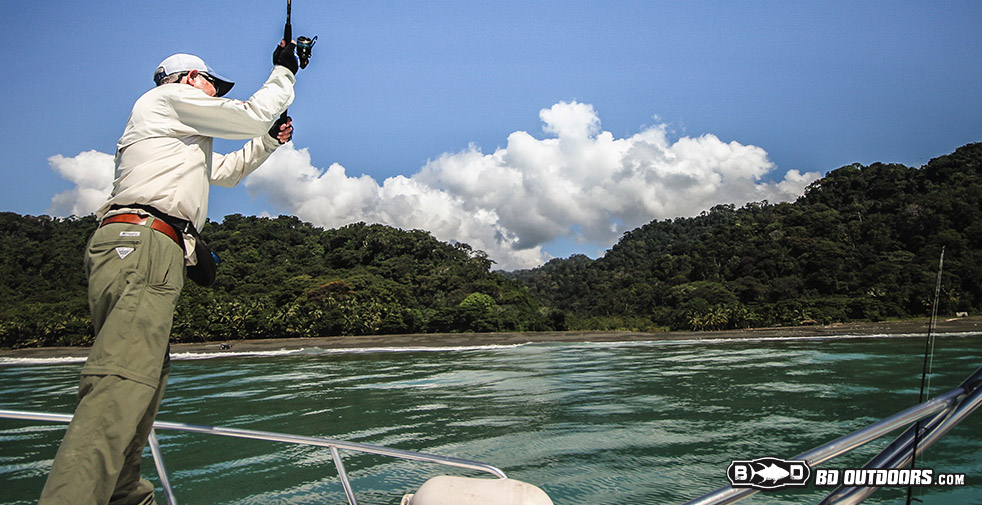 Steve Carson was persistent in his dedication to plugging from the bow as we fished the rocky beaches and reefs.  The casting range was excellent with the Carnage II rod and the SpiderWire line.

One For The Road 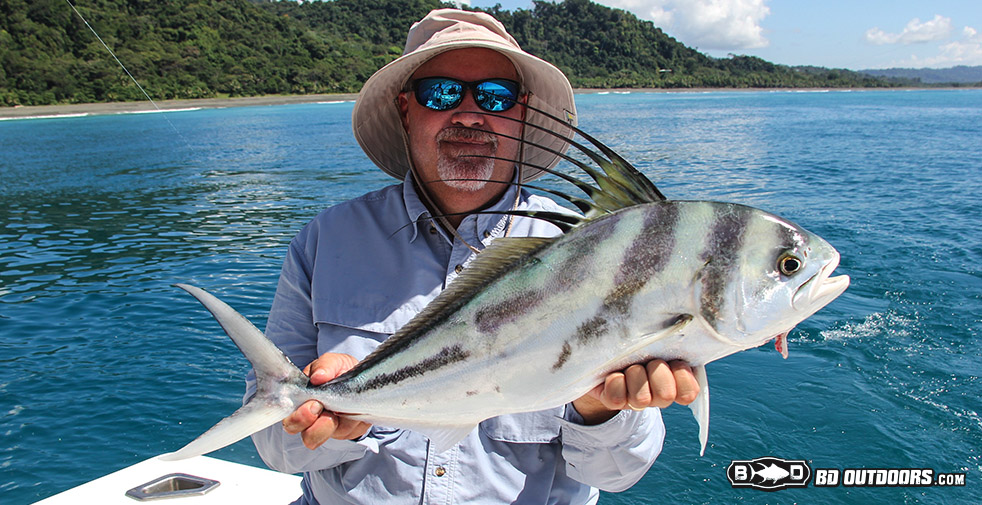 We chose to focus on inshore fishing for most of our visit in a quest for variety, but another roosterfish chasing your lure is a welcome sight. 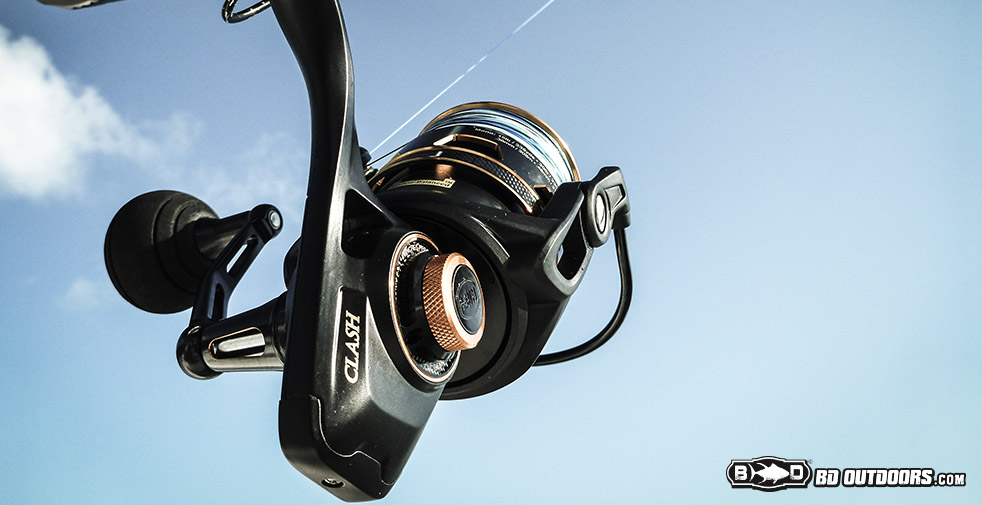 I was highly impressed with the feel, function and construction of the Penn Clash.  I used the Clash at home for dolphin, but it felt good to lock down on some bruisers to push the envelope.  The Clash was flawless. 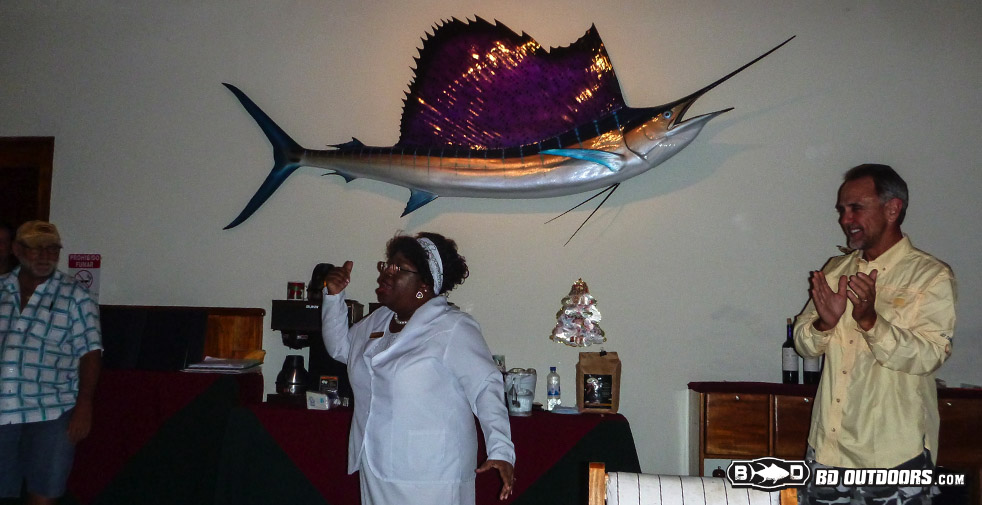 I can’t tell you enough how welcoming and genuine the crew of Crocodile Bay is and Ms.Olympia is certainly a highlight.  She is like the mother figure of the resort and her heartfelt songs at dinner were a crowd favorite!

Do We Have To Go? 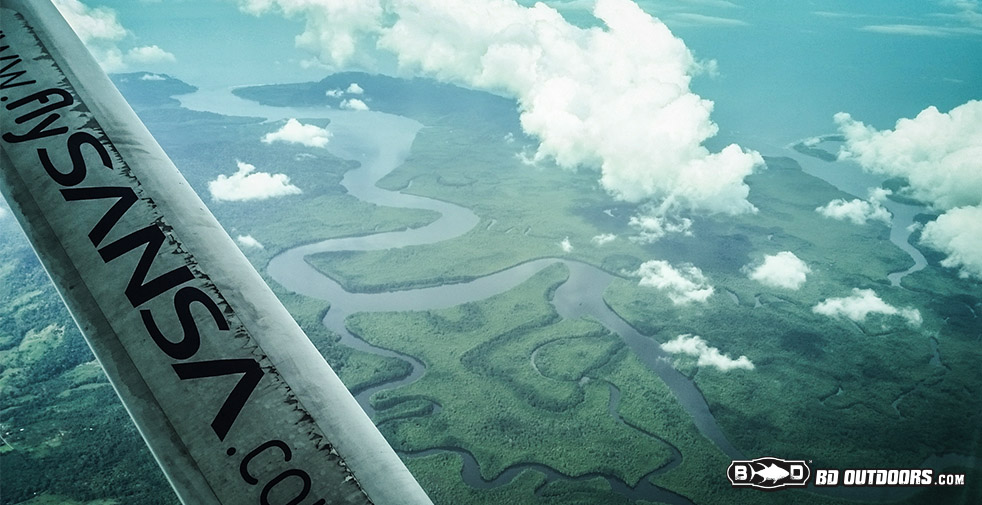 The only bad part of the trip was having to leave.  So many places left to fish, we’ll just have to come back.  Our thanks to Penn and Crocodile Bay for an amazing experience!