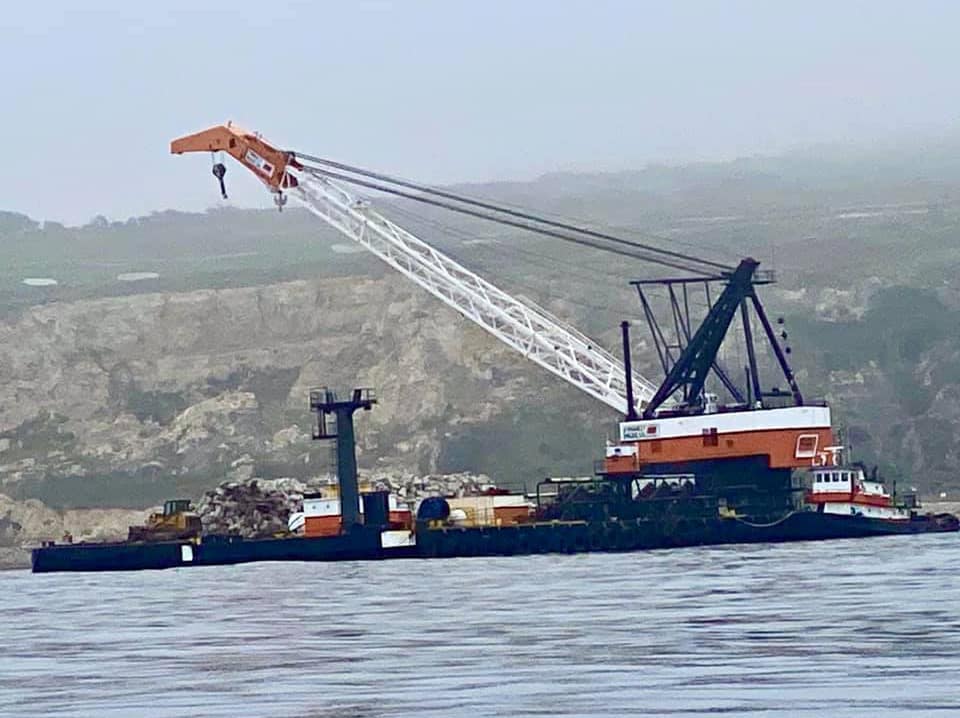 Construction of the long-awaited Palos Verdes Reef Restoration Project is now underway off of the Trump National Golf Course on Southern California’s Palos Verdes peninsula. The first rock modules were dropped in early May 2020 by Connelly Pacific Marine Contractors, the reef construction firm, with work scheduled to continue in phases through the summer and fall.

The reef restoration represents part of a remediation settlement with Montrose Chemical Corp. that for decades dumped DDT-laced waste down drains leading to a sewage outfall off of the Palos Verdes peninsula. That settlement was reached 30 years ago and was funded 20 years ago, but regulatory and permitting snags delayed the actual construction until this very month.

The Coastal Conservation Association of California (CCA-Cal) played a key role in getting the project underway. In May 2019, Merit McCrea, a marine biologist, and CCA-Cal board member submitted a letter of support to the California Coastal Commission (CCC) on behalf of CCA-Cal, as well as the California Sportfishing League and the International Game Fish Association.

“The CCC permit was the final primary permitting hurdle,” said McCrea, who also serves as co-chair of the CCA-Cal’s Habitat Committee. “It’s gratifying to finally see, after 30 years since the suit against Montrose was first filed—after 20 years with funding designated for artificial reef construction in hand—local anglers will finally have new rock in the water.”

An initial construction audit of the first six 14-foot-tall rock modules by the Southern California Marine Institute and the Vantuna Research Group, Occidental College, indicates that kelp bass, barred sand bass, California sheepshead, and blacksmith, as well as invertebrates such as snails and starfish, have already begun to visit the new reef, which lies in approximately 57-feet of water.

“Supporting the establishment of thriving artificial reefs is one of the key objectives of the CCA-Cal mission,” said Bill Shedd, president of AFTCO and chairman of CCA-Cal. “We are proud and thankful for the work of Board Member Merit McCrea in helping to push this project ahead on behalf of CCA-Cal and others.

“The Palos Verdes Reef Restoration Project will create great fishing opportunities for countless generations of anglers,” Shedd added. “We are delighted that construction of the reef is finally underway.”

When completed, the reef will include more than 25 rock modules stretching for nearly a mile along the ocean floor, parallel to the coast. During construction, the United States Coast Guard advises boaters to transit the area with caution as large buoys, anchoring lines, barges, tugs, and other heavy equipment could pose a hazard to navigation.

CCA-Cal is committed to supporting the construction of artificial reefs to benefit anglers all along the California coast. To learn how you can help, visit www.ccacalifornia.org.

The Coastal Conservation Association of California (CCA CAL) was created in 2015 when recreational anglers and outdoor enthusiasts came together to work for the conservation and enhancement of our marine resources and coastal environments.

Today, they are working to protect not only the health, habitat, and sustainability of our marine resources but also the interests of recreational saltwater anglers. The goal of CCA CAL is to protect your access to the marine resources you cherish and enjoy every day. CCA CAL consists of 2,300 members spread across 6 local chapters in Southern California.