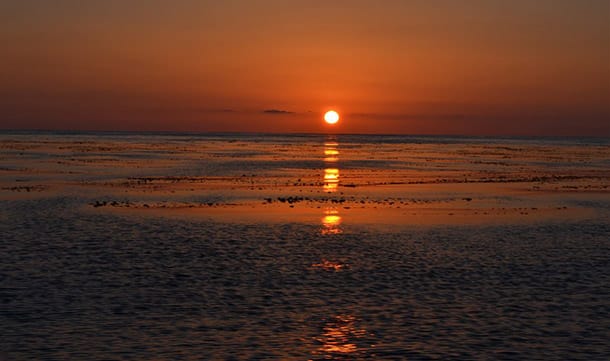 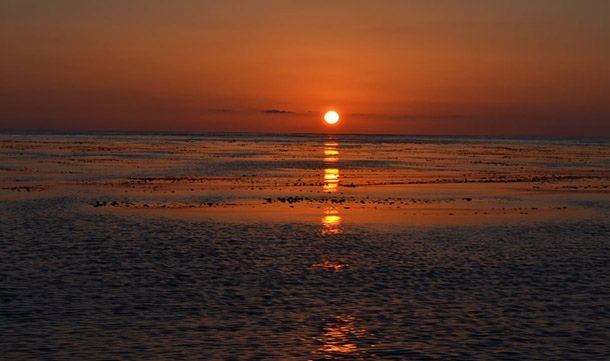 With the recent reports down below from the Long Range boats this early June exploratory trip was going to make an effort to get on some tuna. Bluefin, Albacore, Yellowfin, Skipjack it didn’t matter as skipper Mark Ornoz had his sights set on just getting to the area and start looking.

The Pacific Voyager was fueled and baited up before we left the dock around 7:00pm on Friday June 7th. The charter master Loren Ruden put together a quality group of anglers, many of them regular PV customers as well as numerous long-range anglers.

Skipper Mark Ornoz put together a simple game plan to head south and look for that clean blue 64-degree water and see what we could find.

The weather was as good as you could get for spotting jumpers, and puddlers with very little breeze. You could see a bird or kelp almost five miles away with the binoculars. 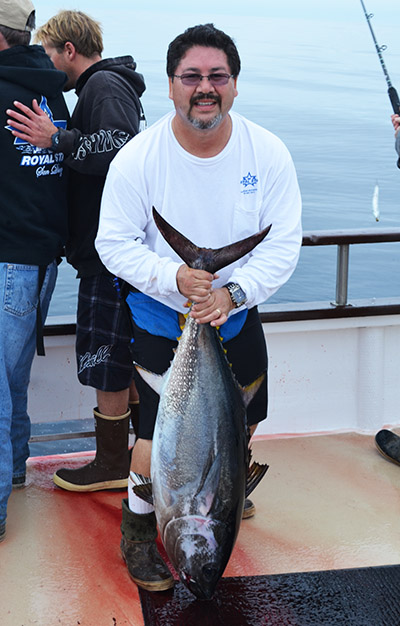 At first light we started around 100 miles south and around 5:45am we got on a spot of puddlers, we gave them quite a few scoops of sardines and then we started to hook a few. The 1st one to hit the deck was at 6:55am and was caught by Norman Evans of Chino Hills. Evans was using a Calstar Rod with a spectra backed Avet 2-speed reel with a short 25lb top shot of Blackwater Fluorocarbon and a 2/0 ringed Owner flyliner hook.

The plunker bite drift lasted over three hours as they stayed with us the whole time with a few other schools breezing through periodically. When the dust settled we had nine BFT’s on the deck between 40-60 lbs. During the drift we had about a dozen casualties after hour plus battles. Most of the lost fish were due to using the smaller reels and light line. Even with heavier line if they used a small reel they couldn’t get any leverage and a long see saw battle was in order. The key to success was getting a hot bait out just as they started to come through our chum. They bit up to 50-pound line with no problem with the right presentation. 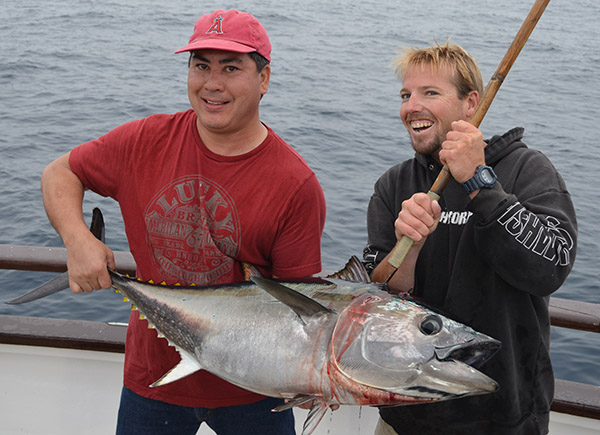 When the final fish was tagged we continued to prospect south looking for breaking fish and kelp paddies. Most of the kelps were holding Yellowtail and we would pick off a few here and there. The water changed as we headed south and dropped a couple degrees as well as being a little dirty and off color. The interesting thing was that we caught Yellowtail, a Bluefin and some Bonita in this water. The skipper wanted to get us further south back into that cleaner water so off prospecting south we went. 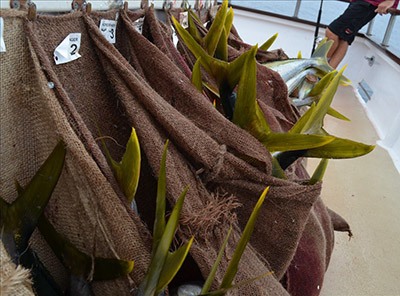 We ran into a large spot of open water Yellowtail with a nice grade of fish in the 10-15 pound class in which we had limits. After scouting around until dark and seeing, but not hooking any BFT’s we decided head back up the line and get in a position for a morning shot at the nicer BFT’s. Just like clockwork as we got the Bino’s out we found a spot of BFT’s with a few 100lbs mixed in. We didn’t hook any of the jumbos but we landed six more to round off the trip with 15 BFT’s from 40-60lbs and limits of Yellowtail.

With little brother Norman getting two BFT’s, big brother Glenn couldn’t be outdone. Glenn ended up getting two as well including the 2nd day Jackpot fish.

Major props to Mark Ornoz and the entire crew who did a fantastic job. Jeff in the galley prepared the meals long-range style for the entire trip, add in the beer was ice cold, what a great way to kick off the season. 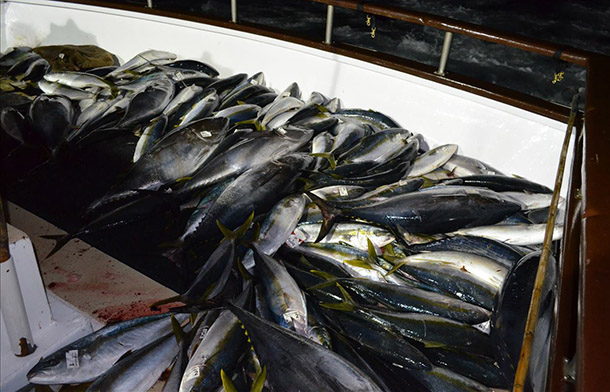