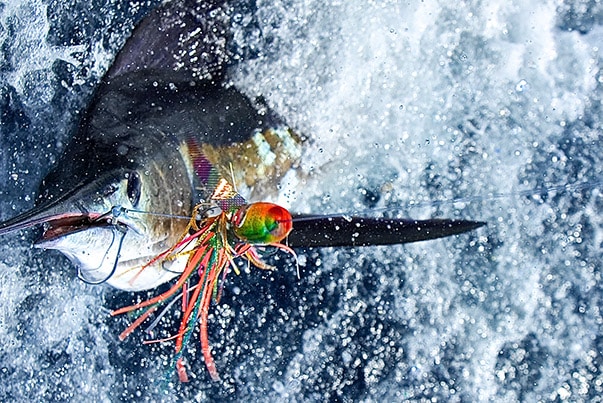 With the exception of the Indian ocean and the East coast of Africa I have at one time or another fished the worlds water, meeting some incredible fishermen and learning methods and techniques from so many masters that I have used to build my book of knowledge. One fisherman in the Hawaiian Islands (a place not known to take new arrival outsiders or ‘Main-landers’ under their wing) immediately comes to mind, when I think back on my lifetime of experiences. About fifteen years ago I meet Mike Christie and his 31 Moppie ‘Tuia’ which he keeps on the west shores of Oahu in Ko Olina marina when I first pulled my boat into the marina slip, he caught my lines and over a bottle of white wine we started talking fishing. Mike is a wahoo fisherman; he fishes the edge and is as passionate about ono as any fisherman I have ever met. He invited me to go fishing the next morning and I jumped at the chance, what I learned that day and others fishing with Mike have never been forgotten and today I still copy so much of what he showed me.

The Tuia was old back then, but she is probably one of the best kept hard fished 31’s I have ever come across, stepping on her I knew Mike was a master. Outside the breakwater we turned west towards Waianae and the 40-fathom edge just offshore. Mike gave the controls to me while he set out the spread, and this is where this story gets interesting. Mike set a five-lure pattern that with the exception of the stinger lure would be a good marlin spread anywhere in the world. (In fact in areas that I have fished a copy of Mike’s spread on a edge where blacks and sails were around I have crushed the billy’s) Two flat lines on 80 chair rods with 12 inch noisy pushers 60 and 100 feet or so back, two 9 inch slants or concaved lures on the riggers (no clips here –dropback rigged) placed 180 and 250ish feet back also on 80 chair outfits. On the shotgun, Mike ran a small 5 inch chrome headed jet lure on “shy” wire from his bridge holder on a stand up 50, way, way back 200 yards or more. He climbed to the bridge and took over the controls,“240 feet 40 fathoms” he mumbled and before I could ask a single question that 50 went off screaming in my ear.

Five fish later in an area no bigger than a football field, Mike tossed me a chewed up lure. “Well we caught three on it before the skirts got too bad to put back out.” The lure head was heavy, an aggressive shovel like front and had beautiful shell inlay, a work of art. “Steve Coggin a buddy of mine makes them

The next day I brought every Coggin lure that they had in stock, and to this day I always have Coggin lures in my spread. I log all my billfish, and had one Coggin lure that was credited to 32 blues, 16 stripes, and 3 black marlin before I lost it in Vava’u Tonga.

Steve Coggin now lives in California, still makes every lure by hand, but you know something? They are better today than they were fifteen years ago, Coggin makes the best billfish (oh yeah this is about ono) wahoo lure on the planet. That day I learned Mike Christie’s way to load a brine bag with wahoo, I heard every five minutes I drove his boat,

“How deep?”If I said anything 5 feet either side of 240 feet I was told “Forty Fathoms” Mike lives in forty fathoms.

Eight knots is his speed over bottom, he pulls no teasers, no ballyhoo, no Mauraders- 4 Coggin lures and that little jet and catches more wahoo than anyone else alive. Mike does not sell his fish like most Hawaiians; he eats them and shares the fish with a lot of people.

I also learned how to take the best care of every fish I put onboard my boat, I still do it Mike’s way today. The ono is killed with a bat before boating, a slit in the gill plate to bleed the fish then right into the deck cooler and ice. Mike stacks his fish head to tail and completely covers the fish deep into the crushed ice, getting the body temperature down quick. The fish are iced over night when he filets and skins, then lions out the filets. Those dock parties we use to have at KoOlina were epic and ono in Hawaii means delicious. If you make it to Oahu, a drive to the West End; take a walk on the docks of Ko Olina marina, you’ll find the Tuia. There won’t be any flags in the riggers, (Mike thinks they are silly) You will find a deck cooler stuffed full of wahoo, and probably get an invite to a dock party and oh yeah bring a nice bottle un-oaked chardonnay…

Try this recipe for seared wahoo, it is really yummy.