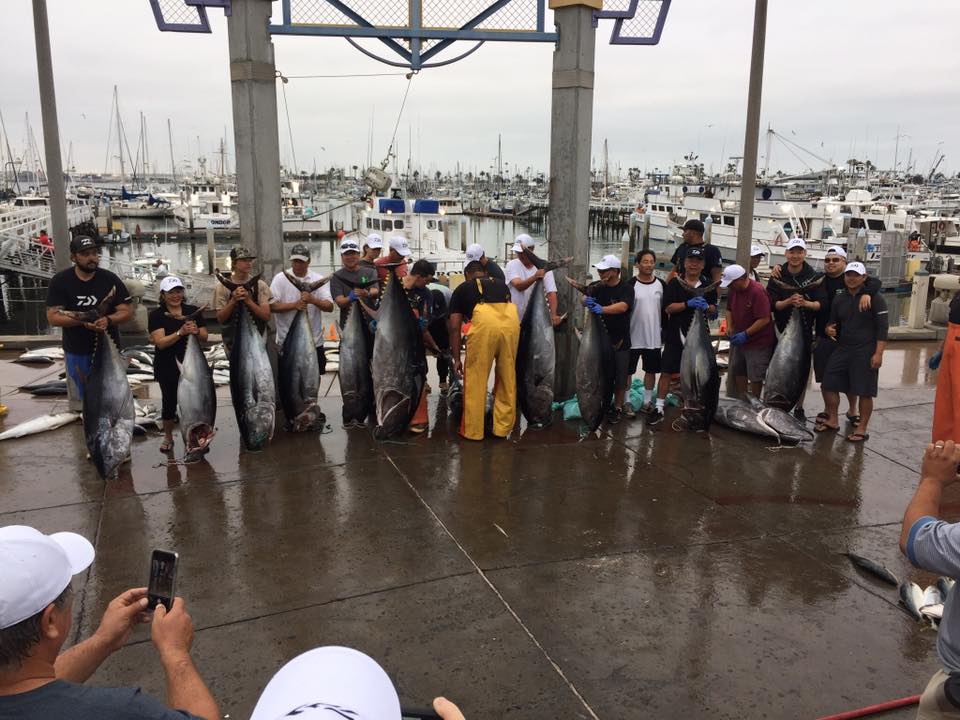 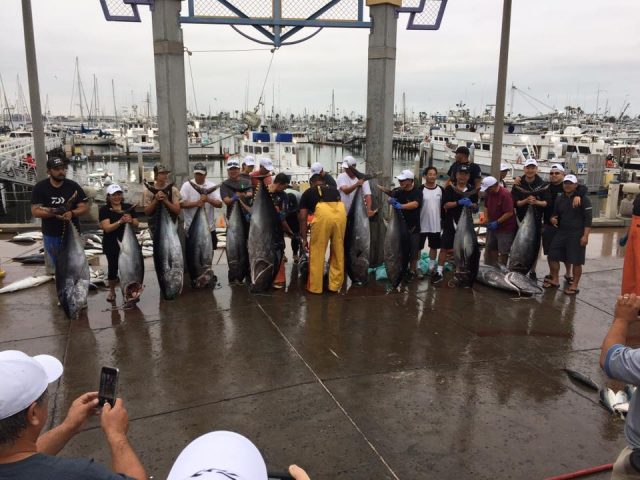 If you were looking for a follow up to last week’s article – Inflated Counts & Internet Anglers – I did have some more thoughts about it and plan to do something (maybe on SoCal Salty), but the news of the week trumps that discussion for sure.

My colleague Erik Landesfeind just posted a good read on this news that the bluefin finally bit this week.  Both numbers and size of fish are notable.  Multiple “super cow” sized fish have been caught in the last couple days.  Even better, all the catching isn’t just happening for the skiff crowd.  Those are some happy anglers (above) returning from what was an epic 3 day ride on Pacific Queen Sportfishing.

I had been speculating on here the last couple weeks that these fish moving off the 302 was a good sign that maybe they had depleted the food supply there and were moving to find new resources.  I was hopeful their movement would translate to a hungrier, more responsive attitude and it appears that this week’s action has supported that theory.

Multiple captains have stated they are responding better to bait. 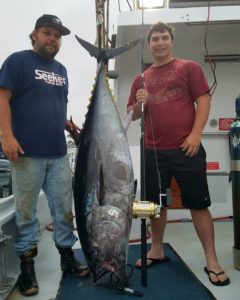 I had a conversation this week with Capt. Paul Fischer (right) of the Outer Limits.  They had a successful trip this week as well.  The angler pictured was on his very first tuna trip and scored this 214-pound beauty (that’s a lot to live up to moving forward).

This fish was a kite fish using a yummy flyer, which has been the dominant way of catching.  Paul told me the bite came about 300-yards off his stern.  Notice the size of the reel.  One of the advantages of fishing the kite is the fact you can fish really heavy.  Because the line is suspended above the lure, out of the water, you don’t have to worry about these fish being line shy.  Given the size of these fish, you really need long-range style gear to play the game and have a good shot at winning.  Seaforth is renting 2-speed Shimano Talicas, and that may be something you want to look into.

While the flying fish kite rig has been the primary means of hookup so far, it’s nice to find out it’s not the only game in town.  Paul said the fish are responding to bait.  The rubber band rig (where you use a rubber band to attach a sinker directly to the line) with a live bait can earn you a bite too.  Entry level would be a 60# setup, but Paul recommended 80# or more.  He stressed too to use a circle hook to help your cause.  Glow flatfalls are also recommended, but you may want to upgrade the factory hooks.  Multiple captains are reporting failure on the braid that attaches the hooks to the ring.

What’s making me more excited though about offshore right now is that bluefin isn’t the only option when it comes to the offshore scene.  Lots of limits of paddy yellows and dorado are being reported as well.

Even nicer to see is that they aren’t all rat and necktie sized fish! 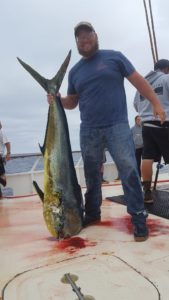 The Shogun returned from a 3-day this week and their catch included this fantastic 48-pound dodo (left).

You may have noted that a lot of the highlights are coming on multiple day trips.  One reason is it just gives you more time on the water to find fish that want to play.  Another consideration as you plan your next offshore adventure is that the kelp action and the bluefin are happening in different areas.  If you want to get in on both, you need time to allow for travel.  It can be done, but understand that’s the deal.  If you are going on an overnight or 1.5, ask what the focus will be so you know and can prepare appropriately gear-wise.

It’s time folks.  Good luck if you get out there!