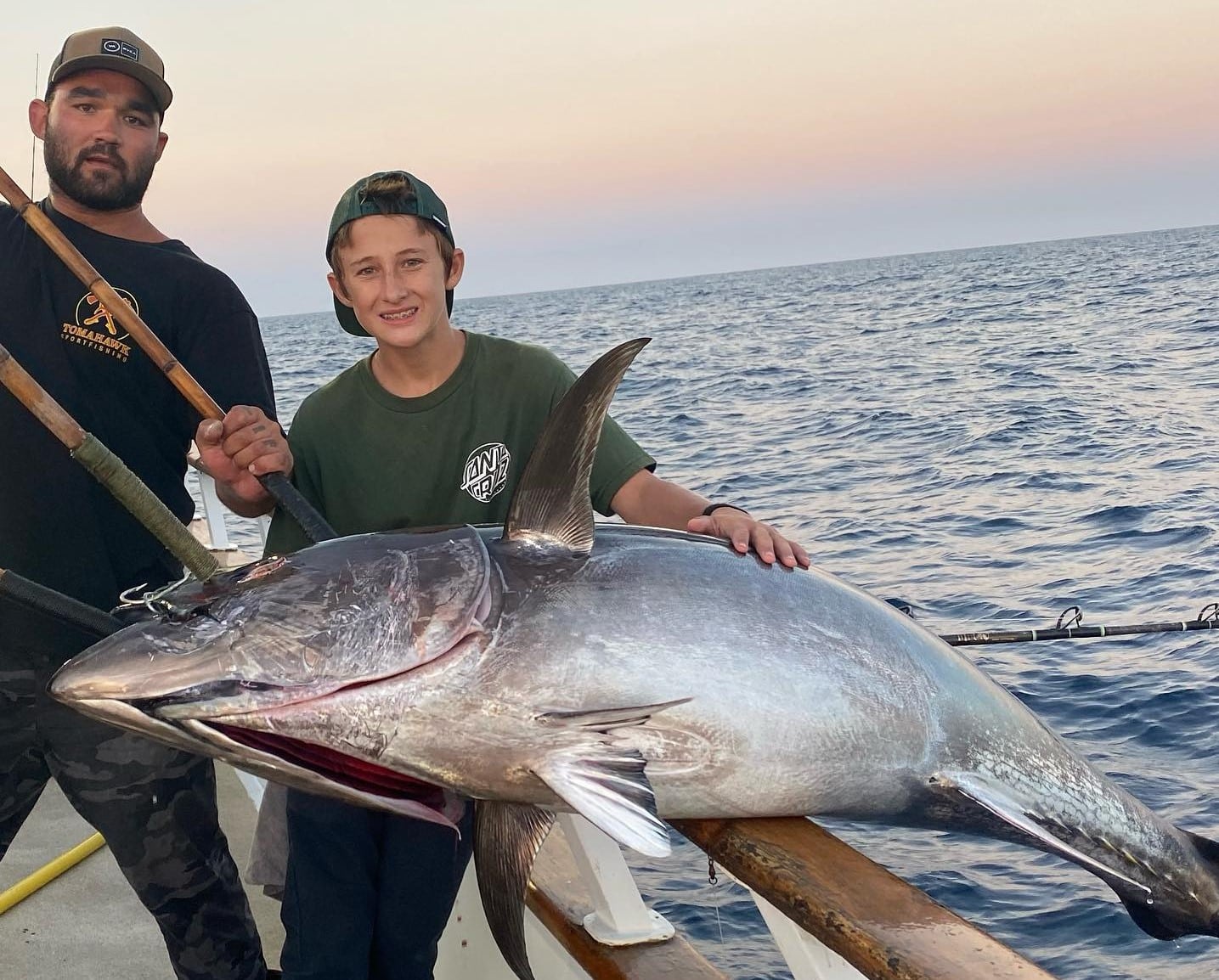 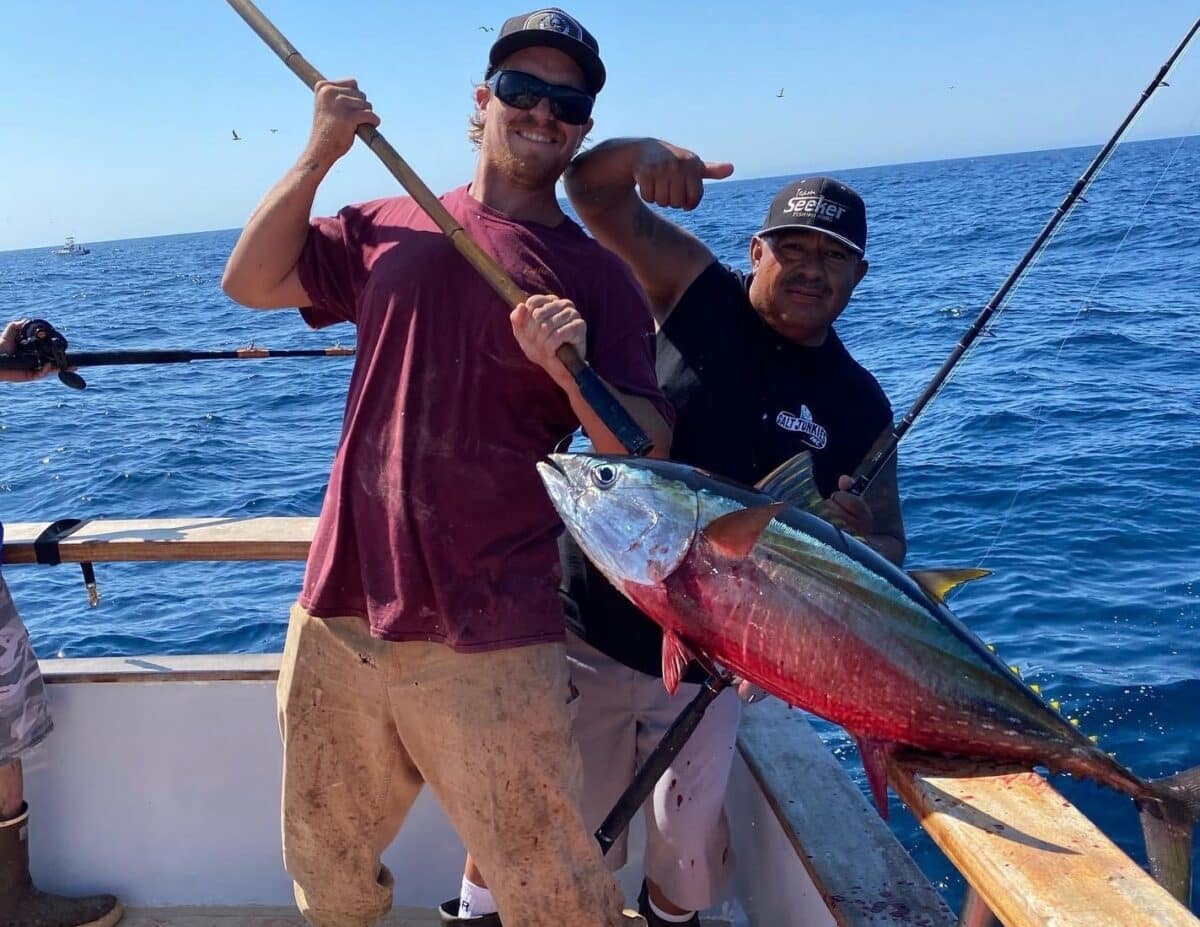 It’s been a steady week of offshore action going into the full moon, and there are fish to be found from below the border to well above San Clemente Island. The bad news is that there is a lot of dead water in between. The Fishdope spotter plane was up earlier this week and after looking at their report, I’d say the membership price to get the info is cheaper than the amount of gas you’d burn if you went out looking for tuna this weekend.  Instead of talking about where they aren’t biting, let’s take a look at this week’s Navionics Chart and find out where they are. 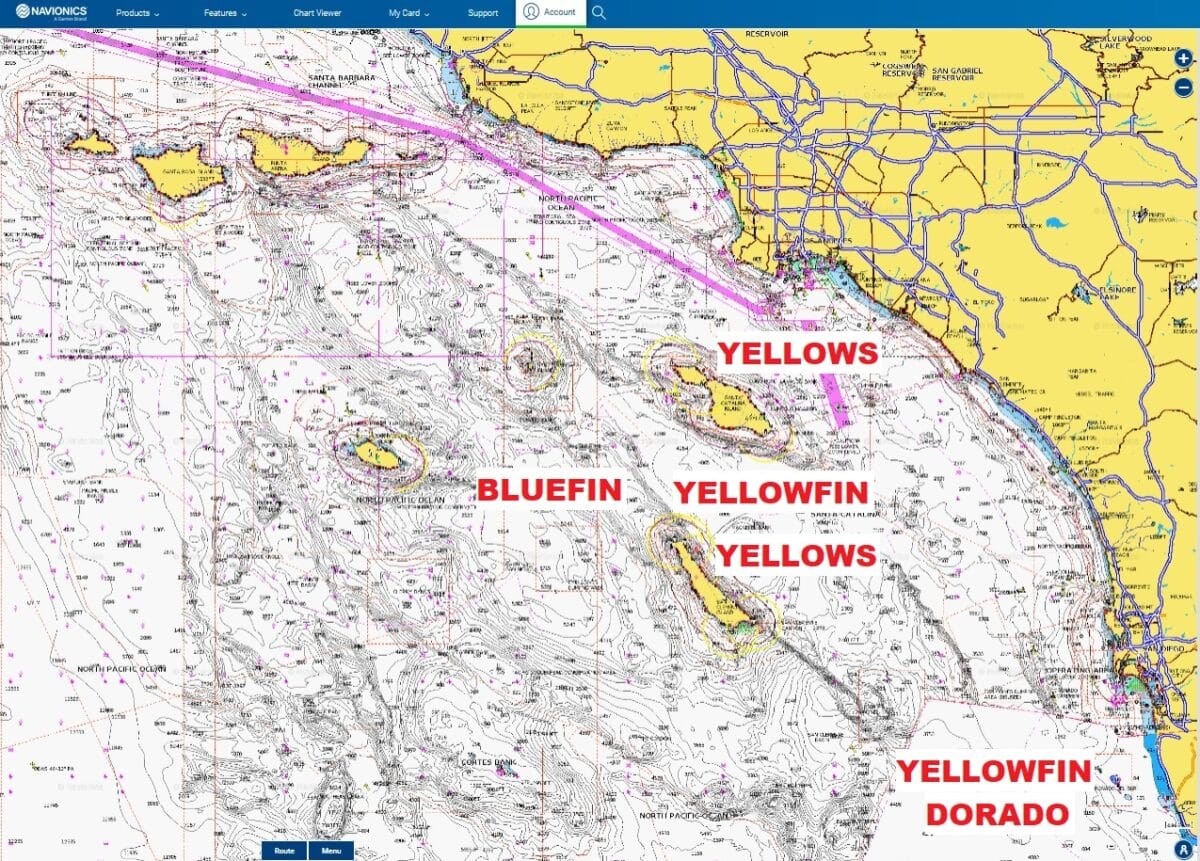 Starting up north, the bulk of the bluefin has slid well above San Clemente Island and there are fish from 50 pounds to well over 300-pounds to be caught. The Thunderbird out of Davey’s Locker found some of the big ones and landed several fish, the largest of which taped out at 364-pounds. Most of the San Diego boats are fishing up this way as are the long range boats. It sounds like the smaller fish are biting sardines pretty well so you don’t need to run and gun or drag a frozen flyer around to catch fish. 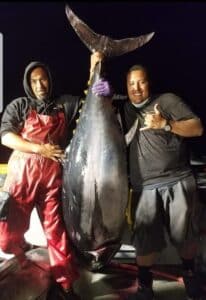 I fished Clemente on Sunday and peeled off the island for a bit to see if there were any bluefin to be found. Ended up running the 500-fathom curve from the Dunes to the west end but saw no bait or other signs of life so I went back to bass fishing, which was pretty darned good. Took another look for tuna on the way home and the only thing I saw was some deep yellowfin marks on a spot of dolphin outside the 152. The fish were deep enough that I doubt they’d have come up for chum if we’d had any to throw.

The yellowtail are still biting at both Catalina and San Clemente Islands. From what I saw at Clemente, having some chum made a really big difference. We were fishing bass in one of the kelp beds and watched a sport boat anchor up in deep water outside the bed and start chumming, the minute they did they had yellows up busting behind the boat. The bad news is that once they started hooking fish, they had sea lions up eating them. Didn’t look like much fun to me, but neither was my only interaction with a yellowtail that day which started with a 20-pound fish coming up and eating my weedless swimbait and ended with the rusty knot that had been tied on that weedless hook for the last two months finally breaking. The not so funny part is that I looked at that knot when I first grabbed the rod that morning and thought, “Wow that’s rusty, I should really retie that”. So, if you’ve had the same weedless swimbait hook tied on for a couple of months, do yourself a favor and retie it. 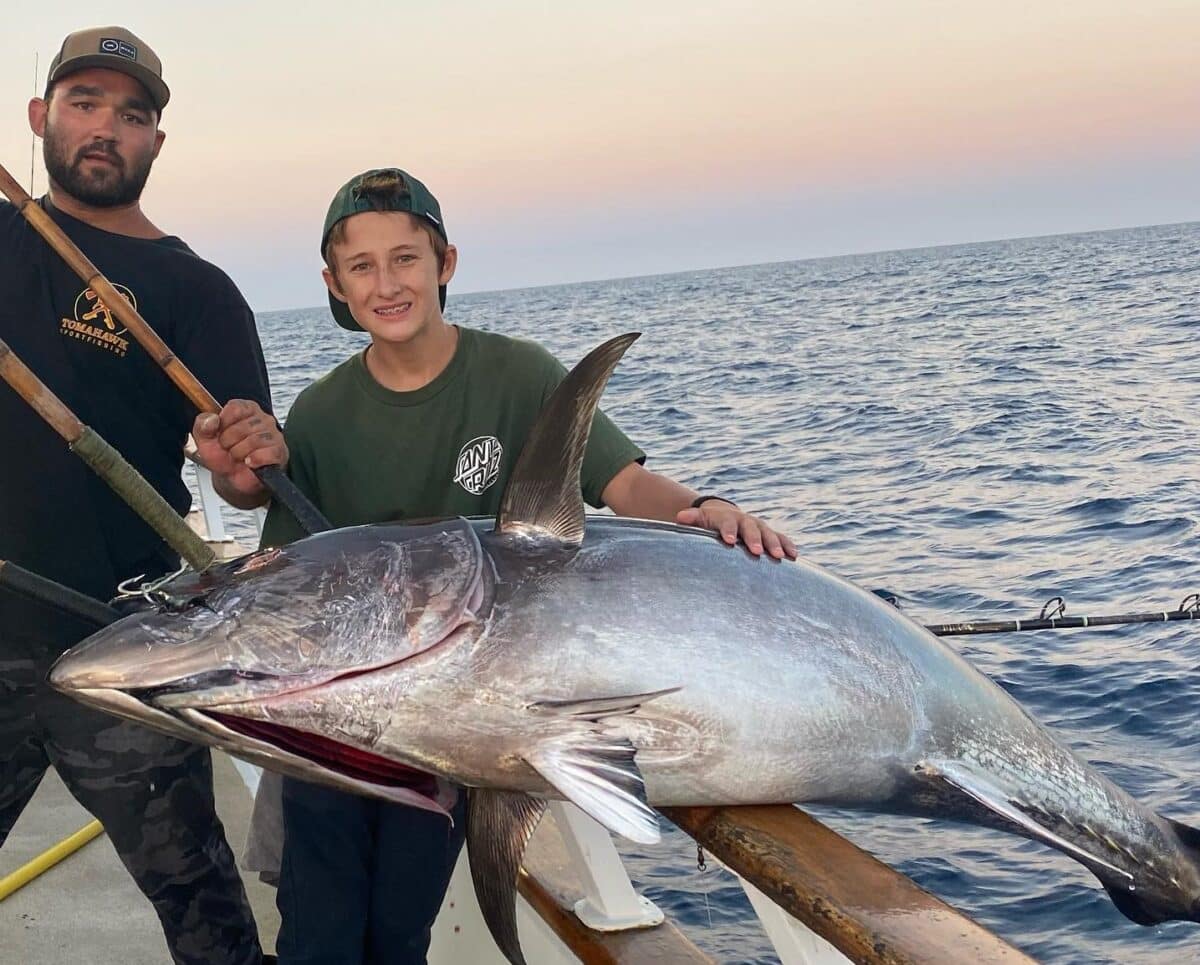 You might have noticed that I haven’t spent much time talking about coast fishing the last few weeks and that’s because there really isn’t much to talk about. The bass fishing is okay, but not great, along most of the coast. There are also some small bonito biting in various places, but overall it’s nothing to get excited about. 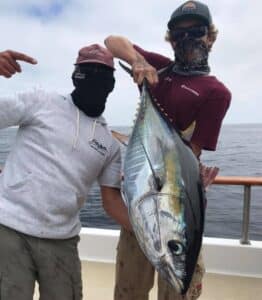 Heading down to San Diego and points south, boats are still getting some good scores of smaller yellowfin and skipjack tuna. These fish can be difficult to find, but when you do find them they seem to be biting really well. If you’re reluctant to take home skipjack due to what you’ve heard about the quality of their meat, I can assure you that the fish coming out of the RSW on these boats is a very different product than the sun-dried blood bombs of the days when fish were left sitting in gunny sacks all day. They make great poke and sashimi if you properly care for them and cut the bloodlines out before eating. Anyway, there are some yellowtail and dorado biting in the area as well and it sounds like there are more fish ready to push up from down below so we might still be fish to catch come the November full moon.

Get more great fishing tips from Erik in his SoCal Scene. 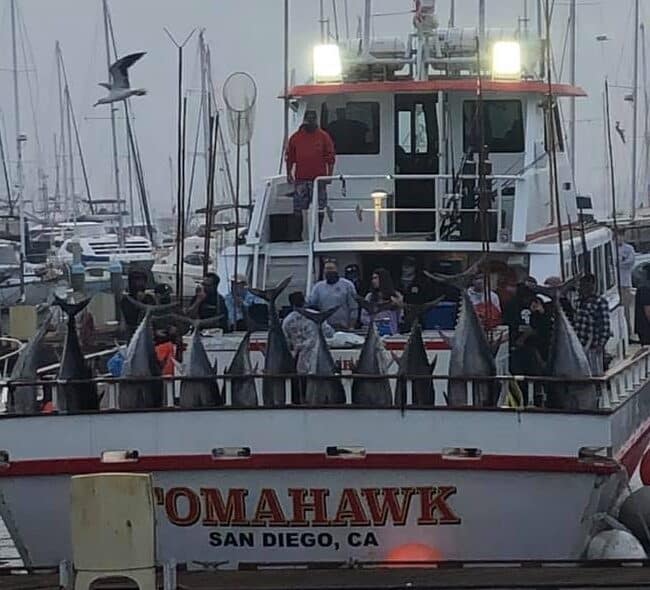 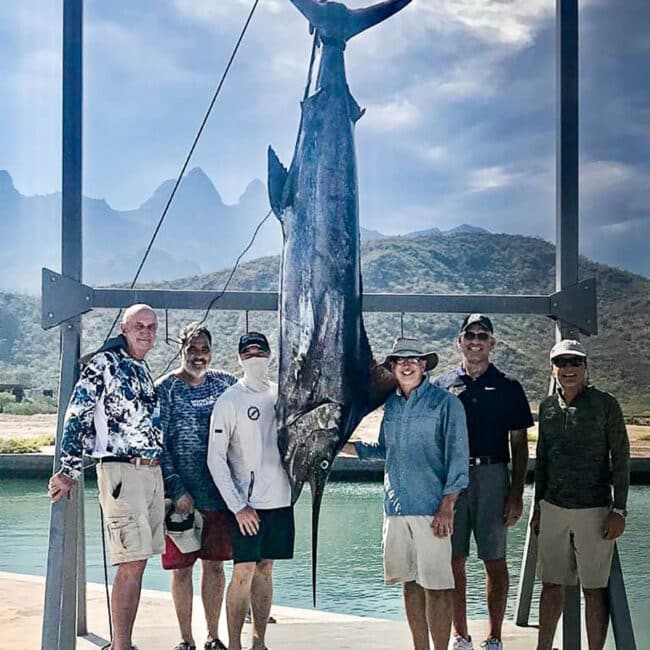 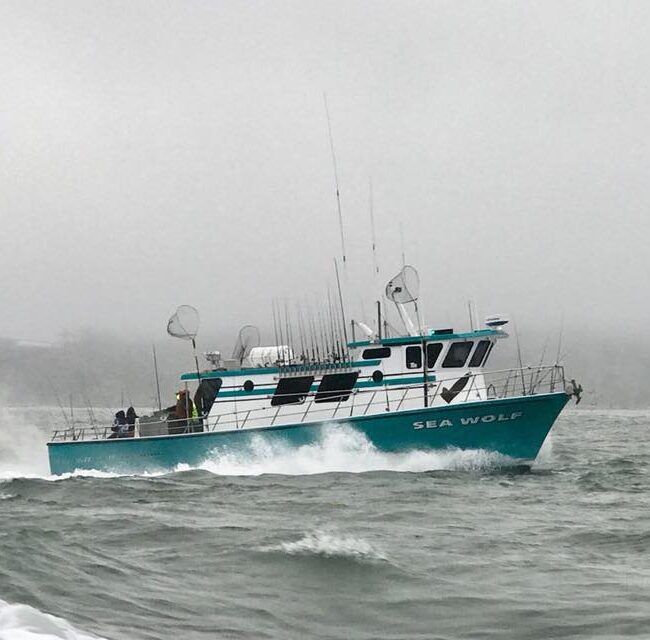