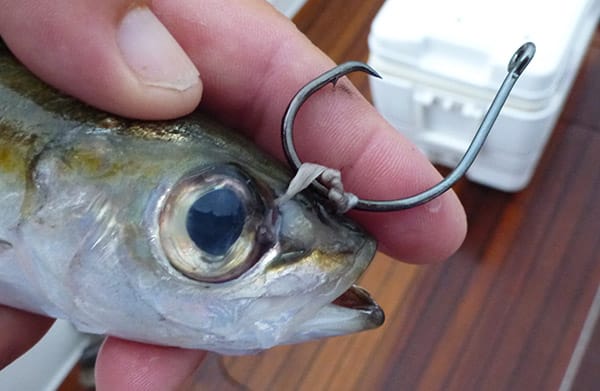 Bridling live baits is nothing new to the fishing world, but is still very localized in geographical zones.

The benefit is a quick way to attach a bait to the hook that is very secure and allows free motion of the bait. It does not close the mouth or hinder the enticing quiver of a live fish.

Often used to attach a circle hook, the method can be used on other hook styles. A little practice helps you perform the operation quickly, thus ensuring the survival of the subject, at least till he is eaten.

Let’s get started. Match the loop material to the size of the bait you will be using. I use a medium rigging floss for most normal sized baits. You could also use dacron.

Pull off a length of rigging floss, but don’t cut it, as we will put a series of loops in a row and then come back and cut them free from the chain. 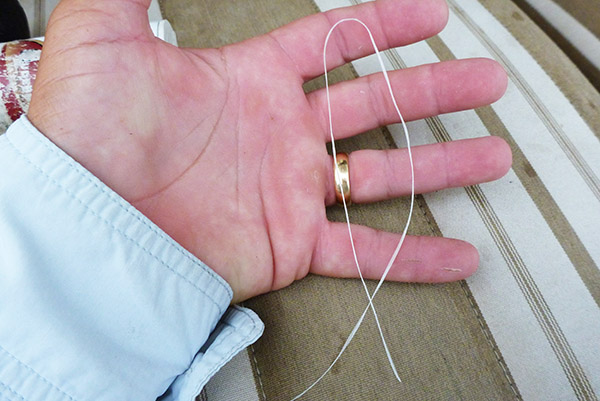 Now make a surgeon’s loop in the doubled floss and pass the loop through the knot three times before cinching tight. Less than three passes can pull out later. The length of the loop depends on the size of the bait, but an average size would be a finished loop about thee inches long. 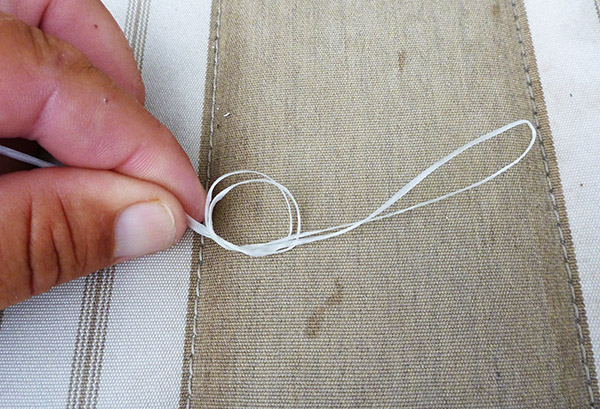 Continue to make these loops down the length of floss. Make extra while you’re at it and then snip them free with scissors just below the knot. 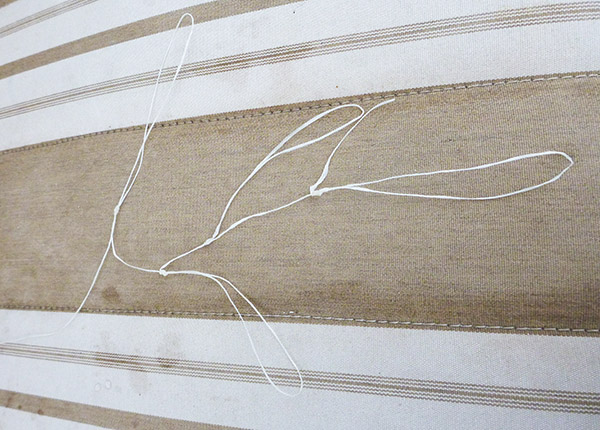 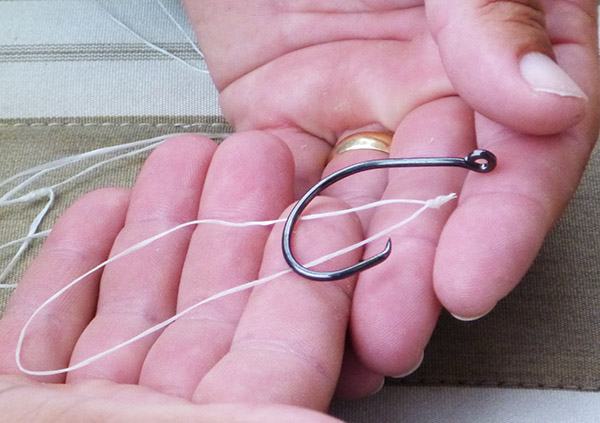 Go ahead and load plenty of hooks with loops ahead of time and then when you tie a hook to your leader, it will be ready to attach to the bait. 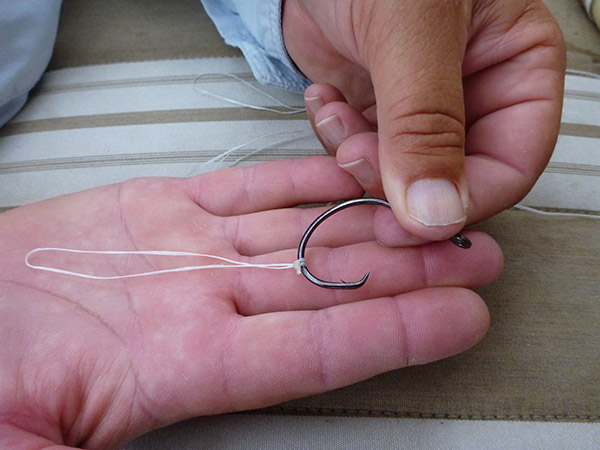 You will need a bait needle and there are several styles. The goal is to thread the floss loop through the forward part of the bait’s eye socket. Don’t poke him through the eyes because that would be mean…. and reduce his friskiness. 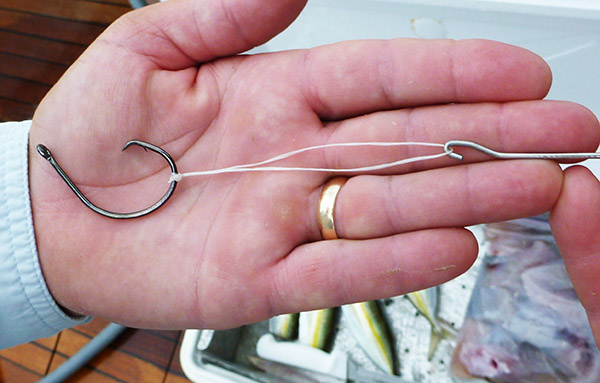 Practice will help provide speed and the quicker you can get from bait tank to ocean, the better your bait will perform. Have the needle hooked to the floss before you pull out the bait. Then pass the needle in front of the eyes, pulling the floss loop with it. 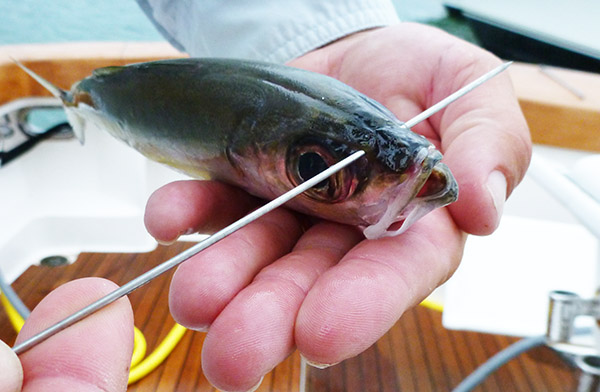 Now that the loop is through, hold it down so that the wiggle of the fish doesn’t pull it back out. You are done with the needle now, so set it somewhere safe and handy. 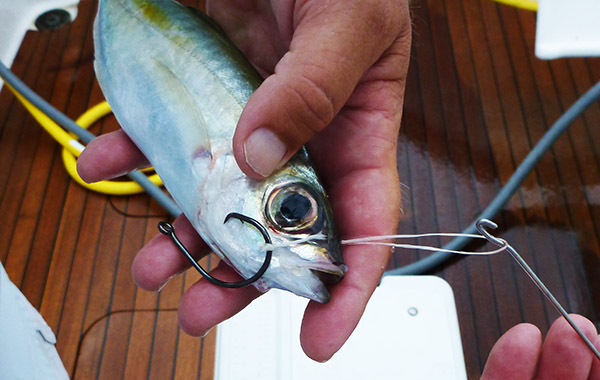 Now you pass the point of the hook through the loop on the opposite side of the fish. 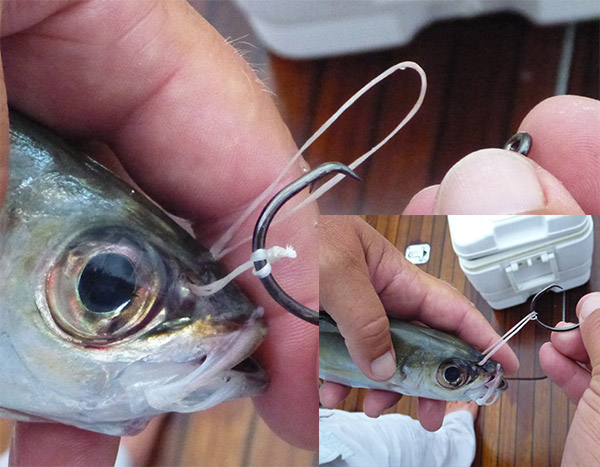 Next you will begin to twist the hook, which will take up the slack in the floss and draw the hook towards the bait’s head. 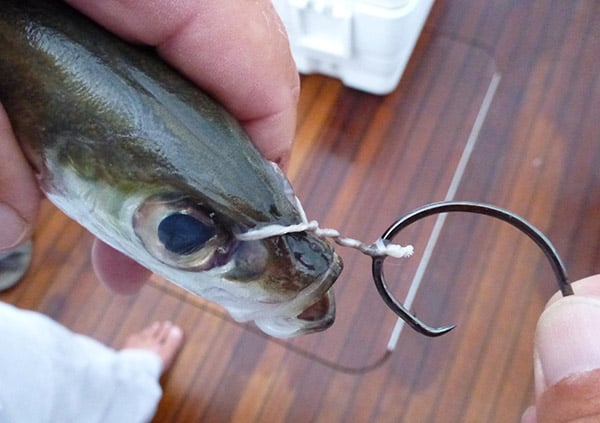 Now take up the slack until there is just enough to turn the hook and pass it under the floss on the head as the picture shows. 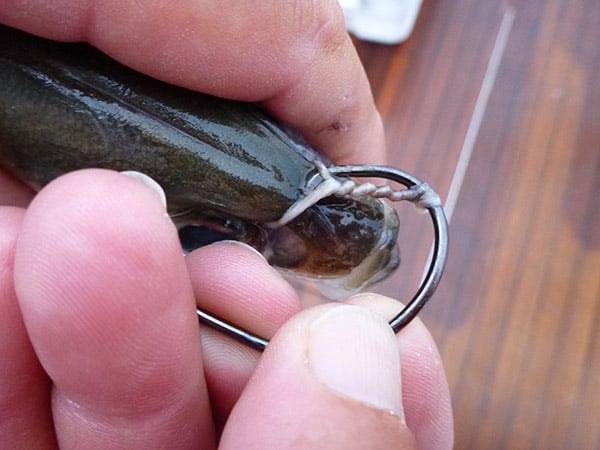 Now the finished bridle will give a very durable, but flexible connection to your bait. It is used for slow trolling, kite fishing and bottom dropping. 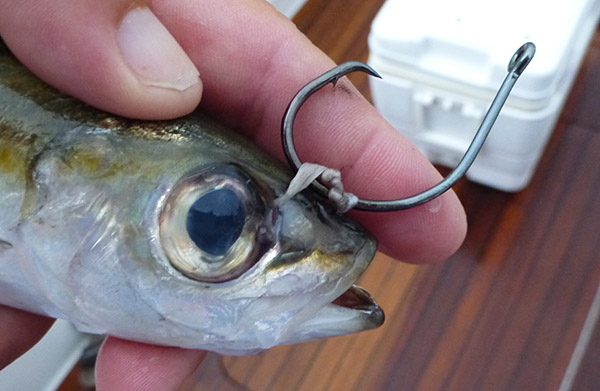 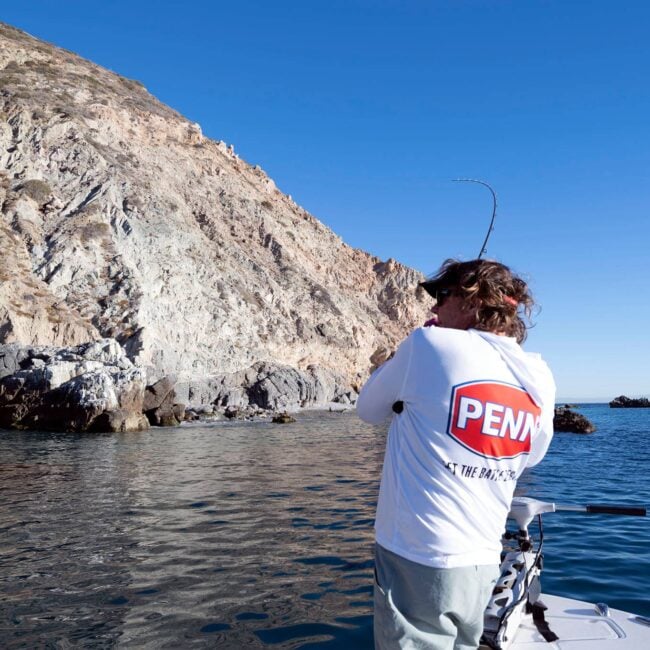 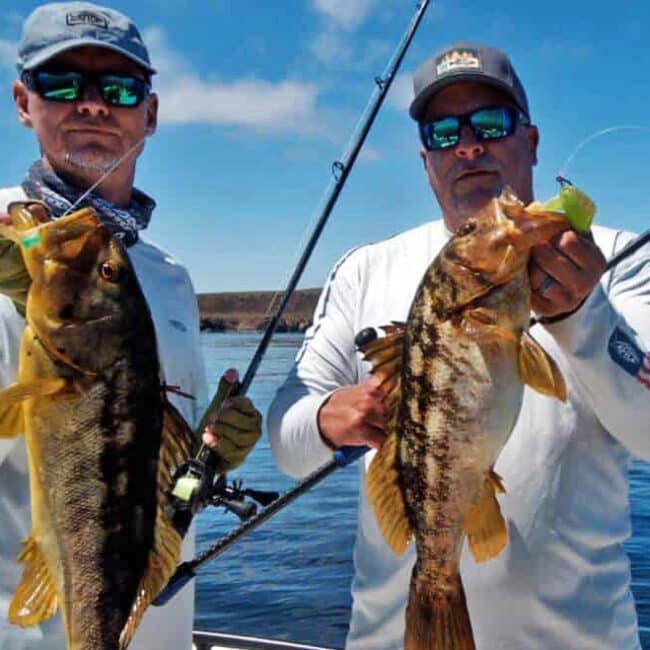 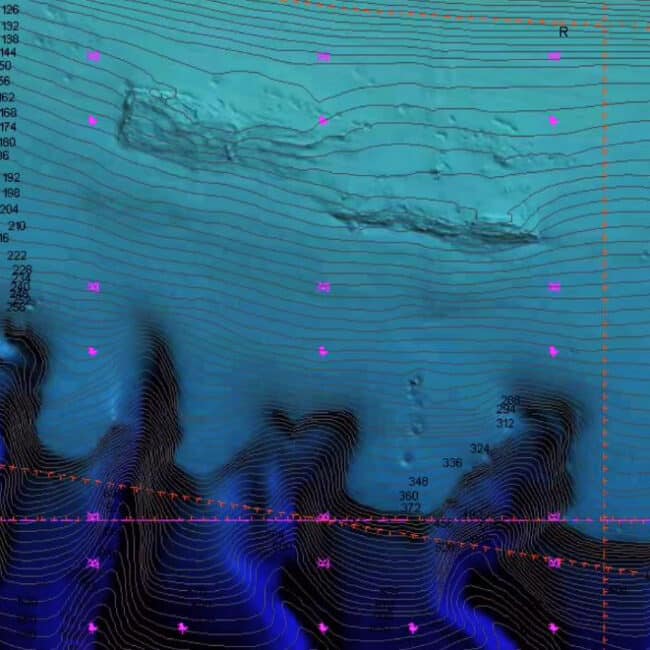 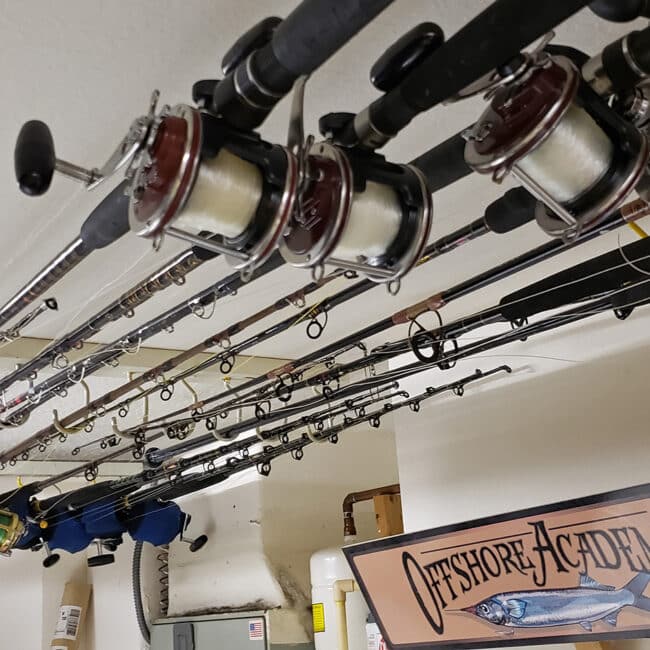 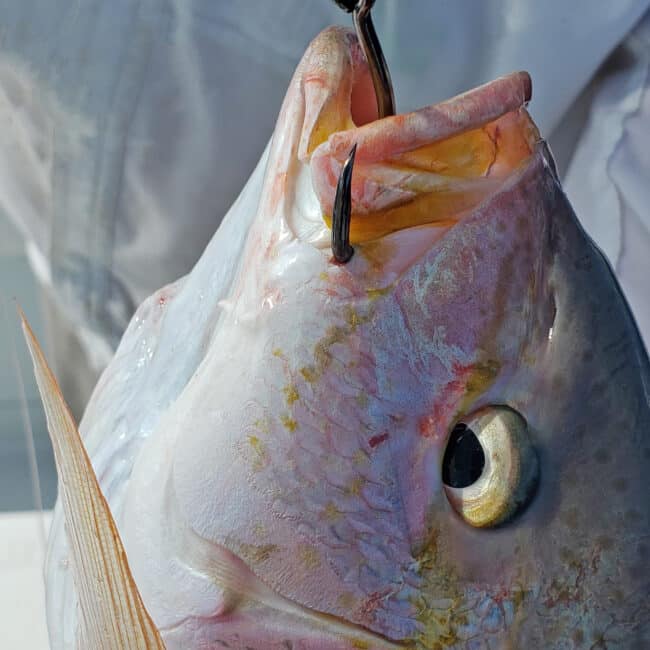 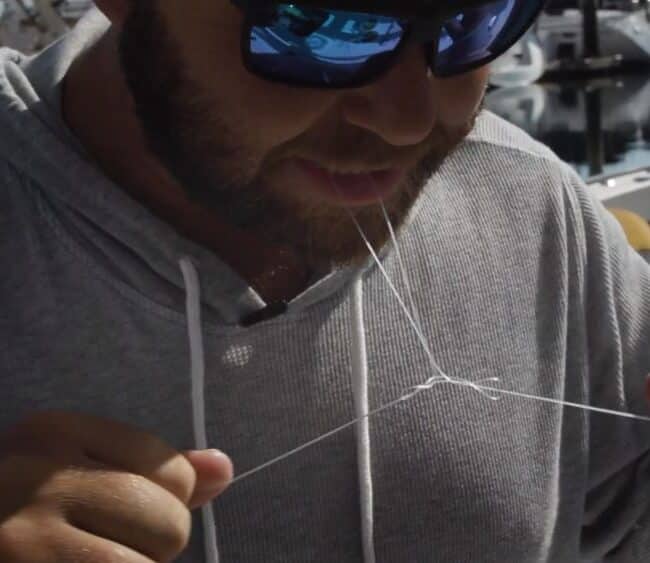