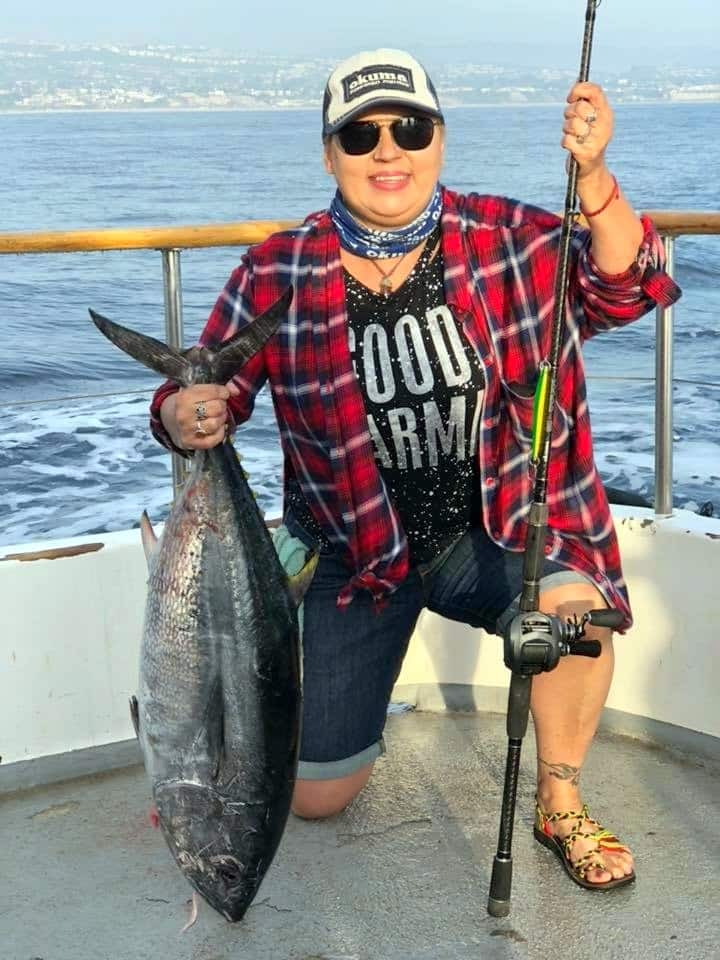 Welcome to November.  October was a pretty great month.  Definitely some cool stuff still going on, but it’s changing.  Here’s a rundown of what’s going on now…

If you’ve been keeping up, you know I’ve been telling you to get out and fish local.  In my opinion, it’s always a great option and there’s always a chance something great might happen. Lightning struck yesterday for Sylvia Gaytan of Los Angeles (top).

Sylvia’s son Jonathan convinced her to go out for the afternoon halfie yesterday out of Dana Wharf Sportfishing.  In the car ride over, she kept on saying she was going to catch a tuna…not completely wishful thinking when you consider that bonito has been the big catch lately for a majority of the local trips.

They were trolling around about 3-4 miles outside the harbor looking for them, when Sylvia got smashed on her Halco lure by this 32-pound bluefin.  She called it.  And yes, she ate the heart. Congrats to Sylvia!

Back To The Coronados 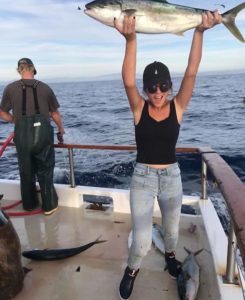 Looks like local yellowfin may be over. The last few trips on The San Diego yielded mostly skipjack and rat yellows. Yesterday, they returned to their regularly scheduled program and were back at the islands for 27 yellows (right) and 75 bonito for 15 anglers.

Capt. Ryan Bostian reports that yoyo jigs on 40# or 50# test was the setup for success.

Personally, I’m glad to see that they’re back on the Island tip as that affords the opportunity to catch a yellow and a lingcod on the same trip. Always a cool feat if you can pull it off.  I’ll probably try to head down and give it a go before the end of the year.

If you’re still interested in yellowfin, look to the overnight boats out of San Diego.  Longer trips (1.5 and above) will probably focus on bluefin. 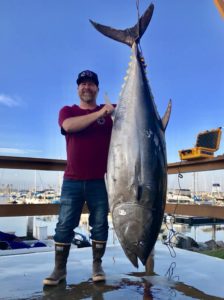 If you’re still looking for a big local bluefin (like me), or to just get a bigger one than the one you’ve already put on your fishing resume, now is looking like it might be the best opportunity of the year.

I’ve seen several reports of anglers getting their cow tickets punched fly lining a big mackerel.  That was the case for angler Dave Breiter (left) this week aboard the Aztec out of Seaforth Sportfishing.  Dave was fishing 80# fluoro with 100# braid behind it, and a 3/0 circle hook with a big mackerel pinned on.  He said the fight lasted 45 minutes.  The fish weighed out at 235-pounds on the Seaforth scale.  That trip featured 9 fish between 175 and 267 pounds.

Boats (including the Aztec) are putting up X.75 trips to target these fish, which gives you an extra night/early morning opportunity.  The action is happening on the ocean facing side of Clemente which is susceptible to wind and weather, especially as we edge closer to winter.  The sooner you go, the better.

I’m headed to San Francisco this weekend to do my annual rockfish and crabbing trip, so I’ll let you know how that goes.