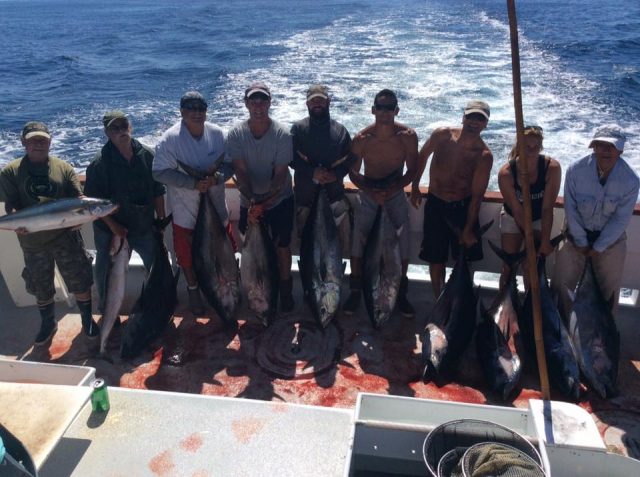 Tanner Bank was the hot spot for big bluefin tuna this wee. With overnight and 1 1/2 day boats from San Pedro to San Diego getting in on the action this may be your last chance to get another shot at these fish before the weather sends them packing. But don’t wait too long because trips are filling up fast. As of noon on Thursday 22nd Street Landing was booked solid until Monday night’s trip aboard the Outrider, Davey’s Locker was booked up as well and the only boats that had any room in San Diego were Saturday night’s 1 1/2-day trip aboard the Tribute out of Seaforth Landing and Sunday night’s aboard the Aztec. There may be other boats online at different landings, but it may take a phone call to find out who has room.

If you’re heading out on one of these trips, I recommend bringing a minimum of 40# test, with 50 or 60 preferred and if you’ve got an 80# rig you might as well bring that along. 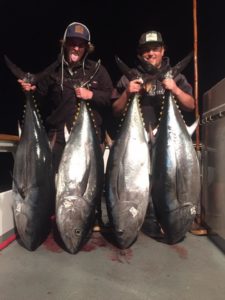 These fish are being caught on live squid fished from 100 to 150-feet deep so you’re going to need some weight to get your bait into the zone. According to recent reports, the glow in the dark 1-ounce egg sinker has been the hot ticket when conditions are right. When there’s a fast drift or too much current, a 4-ounce torpedo sinker rubber banded to your line will get the job done. I recommend bringing both sinkers and rubber bands and asking a crew member for assistance if you’re unsure of how to rig the weight.

This deep fishing style is fairly similar to the long soak bites that we’re all familiar with from normal bluefin years. The captain will mark a school and tell anglers to follow their lines and fish with the wind in their faces. This is immediately followed by a distinct lack of comprehension or cooperation that usually results in a majority of the anglers bunched up somewhere mid ship with their their lines a hopelessly snarled tangle. At this point anyone who has the misfortune of getting bit in or around this mess is likely to end up broken off and frustrated. 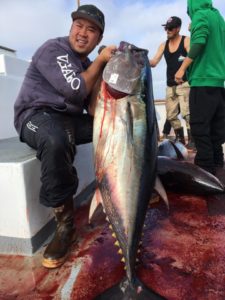 The good news is you are not required to participate in this time honored tuna fishing tradition. All it takes is being minimally aware of your immediate surroundings and having a willingness to remove yourself and your bait from impending misery before it’s too late. My advice, when the boat first stops wait and watch what people do, how they act and mentally flag the serial fishing offenders so that you can avoid them. Once everyone has settled in and has begun weaving their together you can slide in and fish on the edges of the mess. This can be accomplished at either the bow or stern of the boat, just make sure and wind up and start over before you get sucked into the vortex. This does take a lot more work than simply letting your bait out and waiting for a bite or a tangle, but the guys that are getting the most bites are fishing this way. Oh yeah, that guy you flagged as a serial offender, wind up immediately if he gets within 20-feet of you at any time. 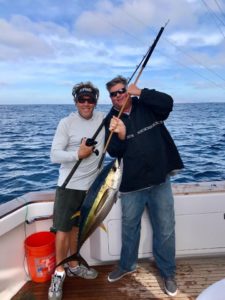 There are still some yellowfin tuna to be caught closer to the coast for private boaters looking for something to catch this weekend. Fish are still being caught at Desperation Reef off San Clemente Island and there are fish being seen and caught in random places offshore as well. I talked to Captain Jimmy Decker who fished aboard the Good Karma with Captain Shawn Morgon over the weekend and he reported catching both marlin and yellowfin tuna off Santa Barbara Island. There’s no real concentration of yellowfin around right now, but if you spend some time looking you stand a chance of getting lucky and finding a few biting fish. Most of the yellowfin that have been caught over the last couple weeks have been associated with dolphins, so don’t drive by any spots of them without taking a close look. The ones that have tuna on them will often have birds working them and in my experience the dolphin will do a lot more water slapping when they’re with tuna, though I’m not sure why. 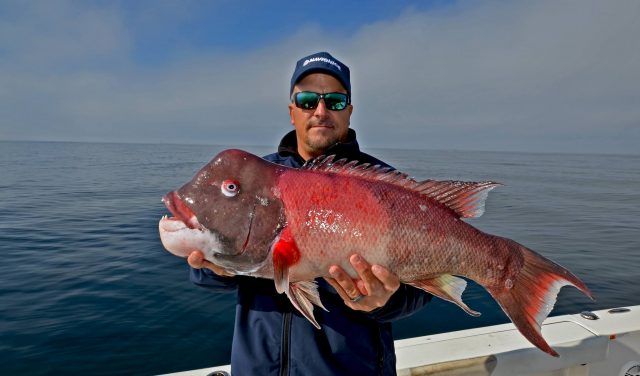 Other than some small yellowtail at Catalina and the occasional bigger ones at Santa Cruz Island, rockfish is the name of the game for boats from Santa Barbara to San Diego. I fished rockfish in Long Beach with live squid on Saturday and the bite on the shallow water spots was surprisingly tough. I’m not sure if it was just an off day, but I struggled to catch a handful of reds and have a dozen bigger sheephead.

The rockfish are biting much better around the Channel Islands, but due to a big swell and major tide swing it’s probably going to be difficult fishing for smaller boats up there this weekend. The good news is that there’s very little wind forecast so you can make a longer run to Santa Barbara or San Clemente Island to fish rockfish if you’re launching out of Long Beach. One word of warning is that Saturday night’s full moon may make for some strong currents so if you’re planning on fishing deep I’d recommend carrying plenty of heavy sinkers just in case.