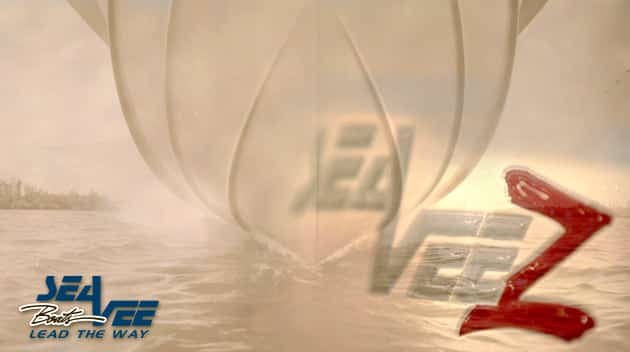 Updated with the new full video released at the Ft. Lauderdale Boat Show!

SeaVee has long been a name associated with hardcore fishing machines that are semi-customizable and known for quality. It is with this same mentality, that SeaVee approached the design of their latest high-performance line of hulls that will be called the SeaVee Z High Performance line. This new state of the art design will be available in the 320, 340 and 390 size classes.

“SeaVee wants to have a high-end, yacht-like, finish looking sharp, looking attractive irrespective of where it might be in the boat. The wiring, the hardware, it’s the hallmark of quality”

“Only when we were strongly convinced that we had a better solution, did we move forward with a SeaVee that has a stepped hull.”

The new Z series has been designed using offshore racing technology that has then been refined to meet the demands of hardcore recreational fishermen. The twin stepped hull design was created using proprietary semi-empirical steady state computer modeling. Then using computational fluid dynamics computer modeling, the hull design was dialed in creating a stepped hull boat that is like no other. These processes had previously only been used by NASA and the U.S. Navy, and the computer designs were validated and optimized using extreme, dynamic testing of a functional plug in real life. The new design has created a boat that upon acceleration has no dangerous bow lift or dipping. As you blast off, the boat simply accelerates, but remains almost level throughout the process. This break through ability is a result of unique, lifting bodies that stabilize the running trim angle. How much safer will a shotgun start be if you can see in those chaotic moments when everyone throttles down.

A second improvement in the stability and efficiency over existing stepped hulls is the inclusion of an augmented four-port air induction system that uses a central air reservoir unit that maintains air in the hull cavities, which reduces drag, and the momentary loss of velocity found in current stepped hulls.

SeaVee didn’t stop there; they improved directional stability by incorporating a system of speed rails. This new patent-pending design keeps the boat from hooking or losing control during high-speed turns. This greatly enhances the safe handling of the boat despite its thrilling ride. Now we all know that going fast is a priority in modern day boats as runs are farther and the “Jones’es” are getting faster. Now with the use of high-tech cored hull materials, the weight has been reduced, efficiency increased, and higher speeds are possible without sacrificing the ride or safety.

The boat lines will still offer the discerning angler the ability to choose options to maximize the custom feel of each boat. Large, fully insulated fish boxes and a unique live well system that solves the aeration problem often found in current stepped hull designs, will serve the most hardcore anglers. A dedicated transducer pad will make installation of modern sounders a breeze. Creature comforts for the family have been enhanced, like pneumatically actuated console door and sliding cooler, electrically operated forward lounge seat backrests, fresh-water shower and toilet facilities. The Z model boats will feature a complete range of outboard configurations and are being built with the same attention to detail and quality that the original SeaVee is known for. You can still get an original SeaVee built to your specs too. They will offer both lines to the discerning client looking to buy one of the best boats on the water.