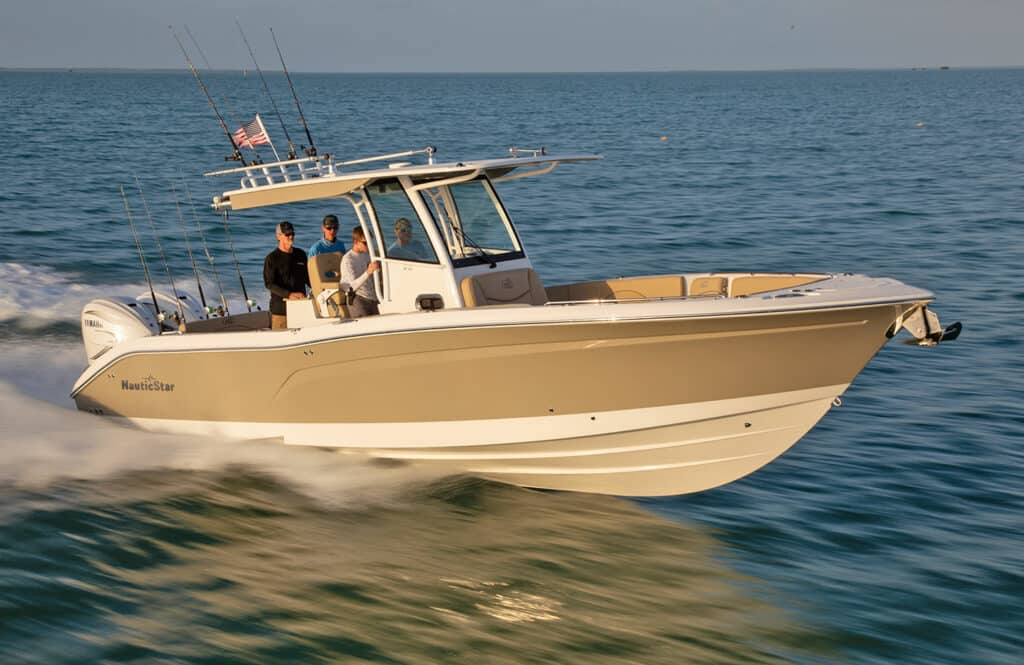 Nautic Star Boats appeared on the scene early this century and quickly establishing a name for itself as a builder of relatively small but high-quality boats, appropriate for all sorts of saltwater fishing.

Before long they expanded their line adding more diversity and size, but NauticStar never broke through the 30-foot barrier. Until now. At this year’s Miami International Boat Show, they announced the existence of a new flagship for their fleet: the 32 XS.

Like NauticStar’s previous models, the 32 XS is built with a sharp eye on quality. The boat has a one-piece, molded, foam-filled stringer grid, voids between the stringers are also foam-filled, and after the deck gets dropped into place it’s mechanically fastened to the hull on two-inch centers as well as being chemically bonded and sealed. Hatches are resin transfer molded (RTM), so they’re as light but as strong as possible and are fully finished on both sides. Electrical connections are the waterproof Deutsch-style, vinyls are Syntec NTB (which blocks the surface from mildew and microbials), helm seats are Llebrocs, and the audio system is a Klipsch. Oh yes, and of course the slide-out cooler sitting under the leaning post is a Yeti – unless you opt to have a refrigerator there, instead.

Yeah, we know, quality doesn’t come cheap. But we’d note that the 32 XS does start at under a quarter-mil (promo pricing on their web site at the time of this writing was $212,774) and in today’s market, that seems like a bargain. Note that a Pursuit S288  costs a bit more with two feet less LOA, and an Edgewater 320 CC

MSRPs at right around $250,000. Of course, both of these are examples of high-quality fishing machines, as well. But we also have to note that in stock form the Nautic Star comes surprisingly well-equipped, and the price tag isn’t likely to go up much as you start checking boxes on an options list –because there simply aren’t that many boxes to check. The Yamaha Helm Master would be a nice addition and you’ll need a set of outriggers, but even things like electronics (a pair of 12-inch Simrad NSS12 EVO3s, including NaviOp digital switching control) and underwater LEDs are already included.

Then again, many will probably decide to upgrade from the standard twin V6 4.2L F300 outboards.  No doubt, 600 horses is not exactly under-powered for a boat of this size and weight. But when you bolt a pair of the new Yamaha F425 XTO Offshore outboards onto the transom, you’re looking at cruising speeds in the low- to mid-40s and a top-end that breaks the 60-mph mark. How can one resist?

Another thing that really jumps out about this boat is that it’s designed by for-real fishermen. Now, we’re not claiming to personally know the people who conceived the 32 XS. But it’s obvious that this boat wasn’t designed by a team of people who’s idea of boating is cruising the Med – this boat is the brainchild of folks who get blood on their hands. How can we tell? Here’s the evidence:

You can bet your bottom dollar that stuff didn’t get incorporated due to the input of anyone living in the Euro-zone. But the strongest tell can be found when you swing open the big forward center console lounger, and see how NauticStar chose to utilize this space. Rather than simply allowing for bulk stowage, or worse yet designing in a system to stow that bow cockpit cocktail table you’ll never use, NauticStar installed racks on the sides and tubes running back through the console. You can safely stow six rods down there, where they’ll always be out of the elements and protected from harm or theft.

We did note two comfort-for-fishability trade-offs, which some people will be glad for but others may find annoying. First, the front seating eats up a bit more deck space than usual thanks to aft extensions with cupholders and stereo speakers. That said, we were quite happy to see that the builder used flip-out backrest for the forward seating rather than those clunky removable backrests that are always a PITA to stow. Second, the rocket launchers were perched atop the T-top rather than lining the back, to make way for an optional extending aft sun shade. While we dutifully note that said sunshade is found on many large center consoles these days and may be considered a big cocktail-cruising perk by some family members, it makes for a very long and difficult reach to get rods into and out of the launchers. When you hear the drag screaming from above and struggle to get the rod down, you’ll want to put that sunshade where the sun don’t shine and lower the launcher to an appropriate level.

No matter how die-hard a fish-head you may or may not be, one other thing we spotted that can’t go unmentioned is bilge and machinery space access. A massive deck hatch in the cockpit swings up on a pair of gas-assist struts, providing plenty of elbow room to get at all the pumps and rigging without any contortions. It’s a common-sense feature that’s unfortunately missing, on many other boats in this class.

So: is the 32 XS worthy of the title “flagship”? You bet it is. In fact, this isn’t only the biggest NauticStar ever built, it might just be the best one ever built, too.