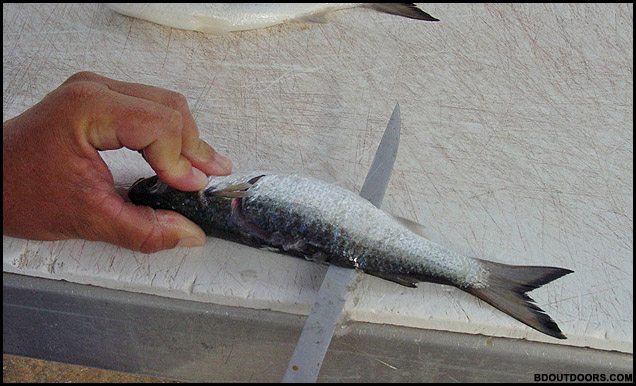 Strip baits are one of the most versatile baits around, but they’re not often used because they’re not readily available — you won’t find them for sale and making them takes time. Well the time spent making strip baits is well worth it!

Not just any fish makes a great strip. Bonita or little tunny are my favorite fish to use to make a strip bait because of their shiny, silver/white color and maximum toughness. The mullet is not as tough, but it works great and is much easier to get in quantity when the silver mullet are running.

The silver mullet is superior to striped or black mullet because of their shine and the firmness of the fish’s meat. Also, ocean-run mullet are better than river mullet. Something about the “mud” in the river mullet’s gut makes them softer. So in the fall when the mullet flow down the coast here in Florida, spend a morning throwing the cast net and catch enough to make strips for the entire season. Keep in mind, however, that there is a bag limit for mullet. Check the current regulations before you get yourself into trouble.

Strips are used for various trolling rigs and to tip jigs. 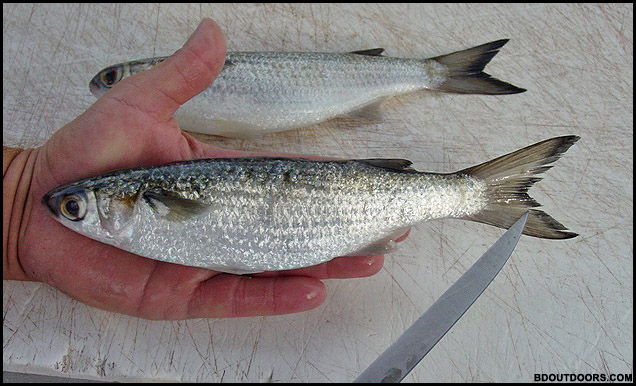 The silver mullet has a black edge on the tail and bright silver scales. 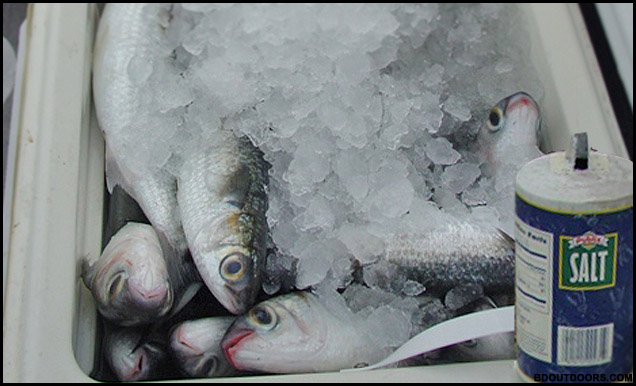 We catch them in a cast net and drop them straight into a brine of saltwater, ice and a mix of salt and baking soda. Be careful not to put too much salt in the brine as you can freeze the mullet if it gets too cold. Try not to beat them up in the net, or drop them on the deck or ground, and never let fresh water touch your baits at any stage of the game. 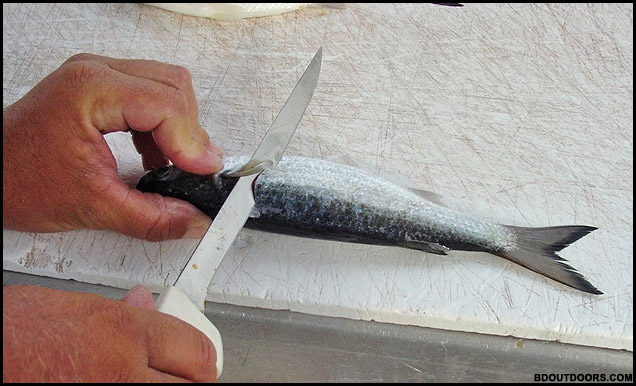 Now take a sharp, thin-bladed knife and start to fillet the mullet. 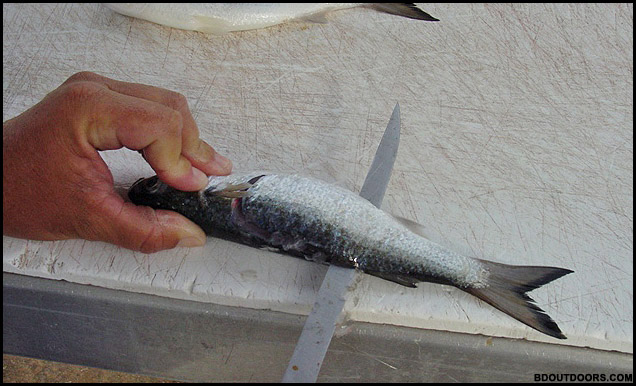 Don’t cut all the way down so as to leave some of the fillet’s thickness on the fish. 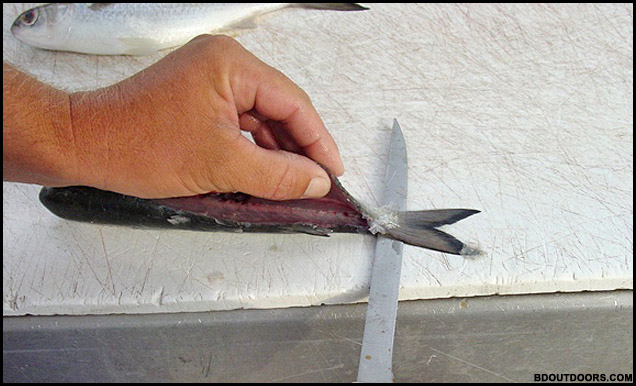 Next, slice downward toward the tail. 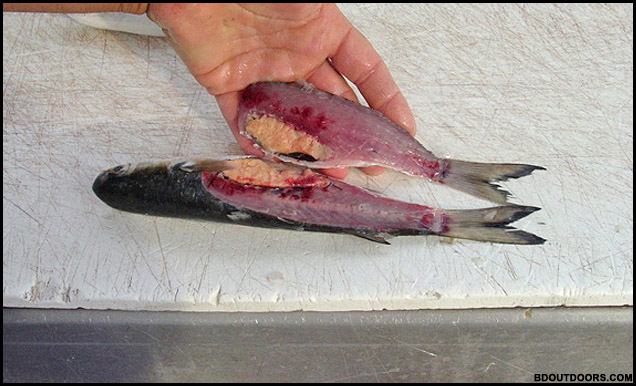 If there is a tricky part, this is it. A little practice and a sharp knife is the key. 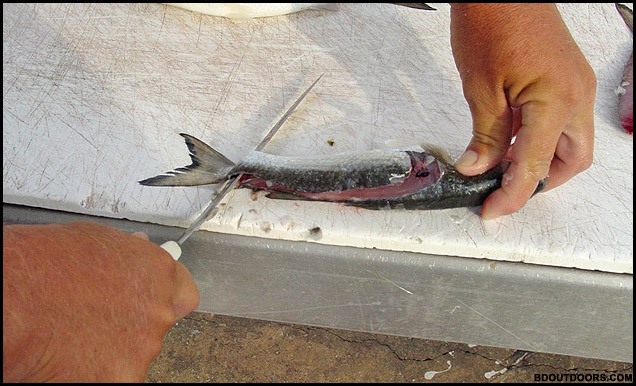 Slice the tail fin into two separate identical parts. If you get it started in the middle, it will slice out just right. 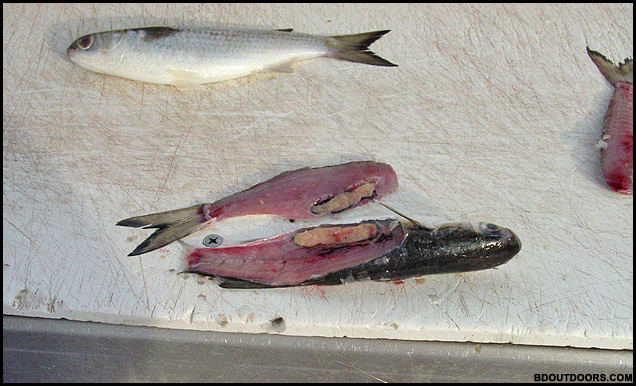 When you succeed you end up with a mullet fillet with half of the tail intact. 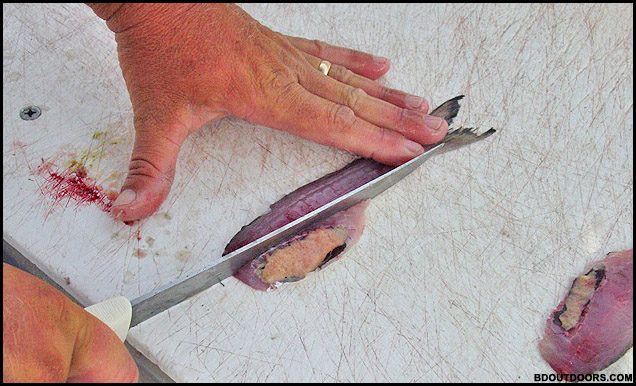 Now flip the mullet and fillet the other side down to the tail. 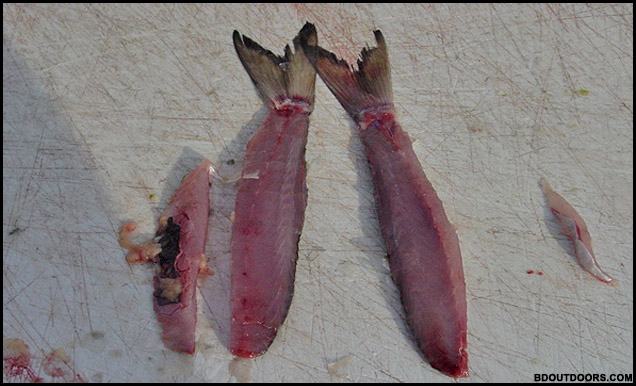 Turn your knife blade downward when you hit the tail and cut the fin from the spine. 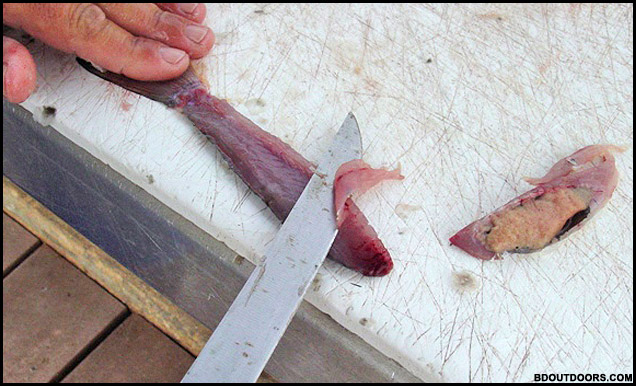 Now we start to trim out the streamline shape of the strip by removing the ribcage section and making nice clean cuts. Shave down any extra thickness above the rib area so the surface is flat. 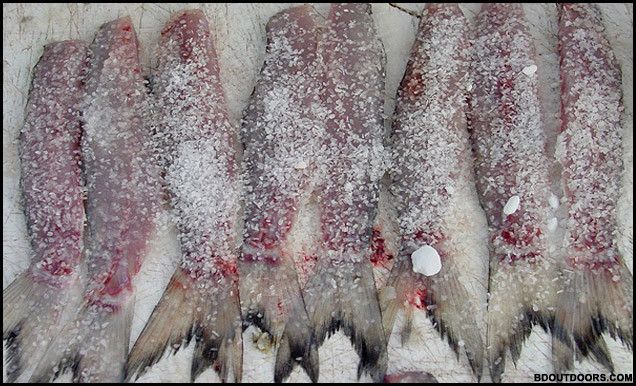 Now you have your matching strips ready to coat with salt and put in the freezer, or take them out fishing right away. Lightly, but completely cover the flesh side of the strip with salt. 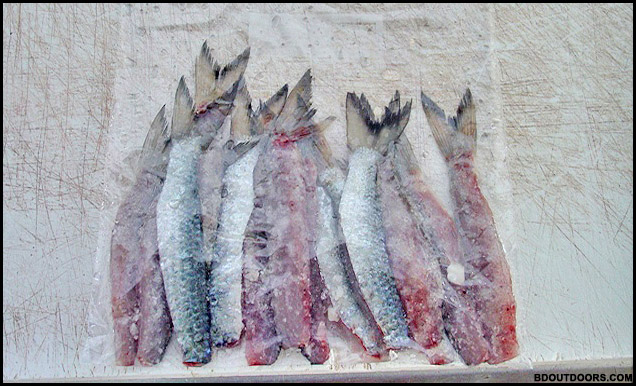 If you have a vacuum sealer, this is a good time to use it. If not, a good freezer-size Ziploc bag will work. Lay the strips out flat, a dozen or so per bag. Try to keep salt out of the track of the Ziploc or it won’t seal all the way. Dip the bag into a bucket of water to squeeze out the air. Do not dip the bag under the water or get any water in the bag. These mullet strips will keep for months in the freezer. 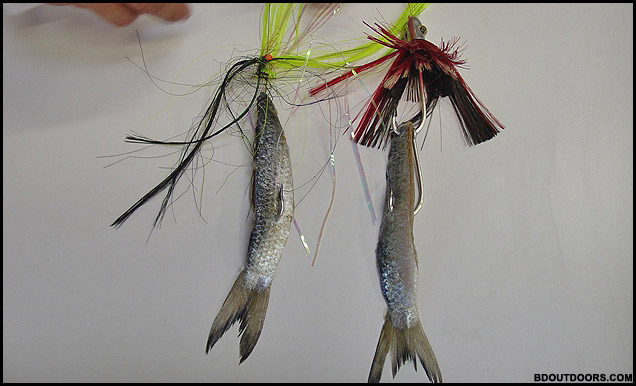 Now you have a great bait for trolling or tipping jigs that is well worth the time! 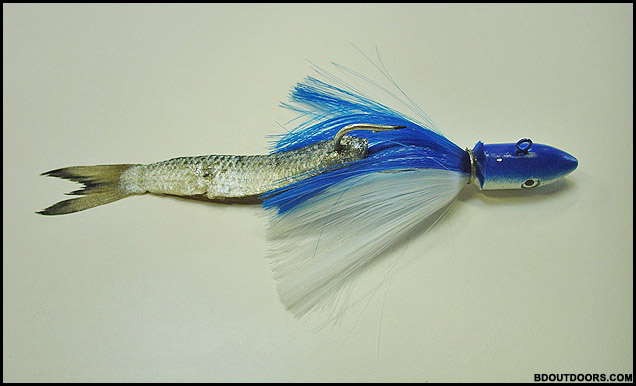 Finish one with a bucktail, feather or Hawaiian Eye to cast or troll. The mullet tail acts like a mini strip bait that no self-respecting game fish can ignore.