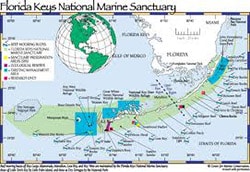 Anglers in places like California who still have battle scars over efforts to designate no-fishing zones might take solace in knowing that victory is in fact possible. Or maybe you won’t, depending on whether or not you have a bitter disposition.

But recent developments in the Florida Keys demonstrate the power that fishermen can have when united and engaged on issues that impact our ability to access and enjoy the nation’s public waters.

For some background: the waters surrounding the Florida Keys are managed by the Florida Keys National Marine Sanctuary, which is currently developing changes to its General Management Plan. The development of a revised General Management Plan is led by the Sanctuary Advisory Council, which is comprised of representatives of various stakeholder groups including recreational boating, environmental interests, divers, both commercial and recreational fishing, tourism and other interests. The Advisory Council holds no regulatory authority, but rather provides input and advice to the National Oceanic and Atmospheric Administration (NOAA), which make regulatory changes to sanctuary management and operations. However, the Advisory Council’s input holds considerable weight.

To aid in the development of the revised General Management Plan, the Advisory Council established working groups to craft recommendations on their area of interest for consideration by the Advisory Council. One of these working groups is focused on “ecosystem protection,” and is tasked in part with reviewing and evaluating existing marine reserves (i.e., no-fishing zones) throughout the sanctuary.

Over the past several months, this working group met numerous times to begin identifying potential new and expanded closed areas. The public was largely unaware of this until a document containing twenty pages of maps showing the numerous new areas that would be closed to fishing began circulating within the local community. That’s when the proverbial crap hit the fan.

Approximately one hundred commercial and recreational fishermen flooded the next working group meeting, which took place on July 29, and inundated the group with opposition to their plans. Click here for an entertaining recap of that meeting.

As a result of the overwhelming public outcry, the working group’s plans were scrapped and now it’s back to the drawing board. A series of regional public workshops is being scheduled to get direct input from those whose livelihoods depend on the health and accessibility of the sanctuary’s fisheries resources before any potential changes to sanctuary management are developed. So while anglers aren’t out of the woods yet, what would have certainly been a negative outcome has been taken off the table and anglers are provided an opportunity to help craft a plan that works for, not against, them.

Protected areas (discrete area closures with a demonstrated scientific need) have a role in fisheries management in the Florida Keys and elsewhere, but far too often they are promoted as a silver bullet, and without consideration of their socioeconomic impacts. The fisheries resources in the Keys face numerous threats, most notably from water quality issues, that cannot be addressed by simply telling anglers they can’t fish there anymore.

In a way it’s unfortunate that it took so much public angst for the Sanctuary folks to realize they were headed down the wrong path, but at the same time it’s good to know that we can still win one every now and then.