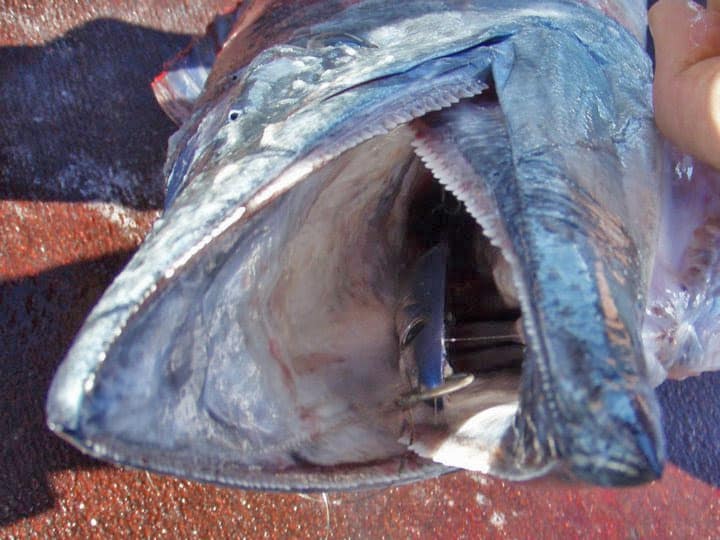 I have a confession…I’ve never caught a wahoo. I’ve never gone long range. I fished the East Cape a few summers ago and they said come back in fall if I wanted to get one. So I’m as new to wahoo fishing as you probably are. Like you, I’ve been watching the pictures coming from the boats…seeing the one every other week, turn into daily, and morph into what we saw develop this weekend.

It was the weekend that more than one person has referred to as – Wahoo Weekend.

What I do have going for me is relationships with captains and crewmembers with decades of experience on the water. I leaned on my buddy Capt. John Anjard for last Friday’s article – What Else Can I Do? In that post we touched a little bit on fishing wahoo when you’re not the guy that gets bit on the troll. I didn’t have a lot of room to address the topic beyond the conventional wisdom. Still if you read that piece, you’d have had enough information to do what a couple of my buddies did.

They knew what they were doing before reading my article, but two friends of mine, Stew Suenaga and Norman Gyotoku were fishing a 1.5-day trip over the weekend on the Pegasus. They encountered just the scenario I described in the article…a ripper yellowfin bite drifting on a kelp. Stew fishes long range and came prepared. Both of them had a wahoo setup rigged and ready to go. They spotted some zipping around sub-surface and went into action. Norm deployed his rig with the wired gold Raider jig. Stew put his 6x Jr in tarbaby (black/white swirl, non-wired) into play. Double bendo. Double Hoos. Nice work guys!

What’s happening here locally is what is seen typically on an 8-10-day long range trip in the fall. I knew I wanted to talk to some guys who’ve had that experience. One of the first to come to mind was Capt. Bruce Smith of Fortune Sportfishing.

Bruce didn’t get back to me in time for Friday’s article, but he did get back. Bruce entertained several questions from me before sharing with me something he wrote back in November of 2010. Bruce was formerly the captain of Shogun Sportfishing. During that time, wahoo became one of Bruce’s favorite targets. Clearly the man has put a lot of thought into catching these fish. Here are some excerpts from what he shared with me.

To Wire Or Not To Wire

One of the main premises of Bruce’s “wahoo white-paper” is what happens when these fish start to see a lot of boat pressure. These fish are skittish by nature and now that the fleet is actually targeting them, here are some things you may want to consider as the weeks progress.

The conventional wisdom says, “Wahoo have razor sharp teeth, therefore wire is a must.” While the wire will certainly help in counteracting getting bitten off, they’ll also reduce the number of bites you get in the first place. In these kinds of conditions, Bruce recommends only wiring the smaller jigs – like the smaller Raiders or the 6x Jr (although Stew proved you can get away not wiring a small jig!). Bruce doesn’t believe wire is needed for the big jigs. If you’re going to use wire, keep it short, 12” is plenty. He also says wahoo like the small jigs, so don’t be afraid to go down to as small as the 85 gram size on the Raiders…especially as the boat pressure increases!

Also going against the conventional wisdom, Bruce prefers muted colors – ex. the aforementioned tarbaby, and the “don’t ask, don’t tell” (dark green with pink tip). I’ve heard it said that when picking a color, the best color is one that nobody else is throwing on the boat.

So if everyone is going flash, go muted.

Finally, the ultimate change-up rig is surface iron. Nobody seems to think surface iron for wahoo, but I saw it happen myself last October at the Coronados. I was on the San Diego and watched Capt. Steve Peterson of the Mission Belle hook one off North Island (I bet Steve is still kicking himself for handing that one off). Whereas, FAST is always the recommended speed on casting jigs (heavy iron, wahoo bombs, Raider jigs), slow to medium retrieve is what you want to do on surface iron.

I feel like I’m leaving too much on the cutting room floor, but these tips will give you some more ideas to consider when you’re out there on the water. Hopefully, yours (and my) El Nino wahoo dreams are fulfilled. Tight lines!