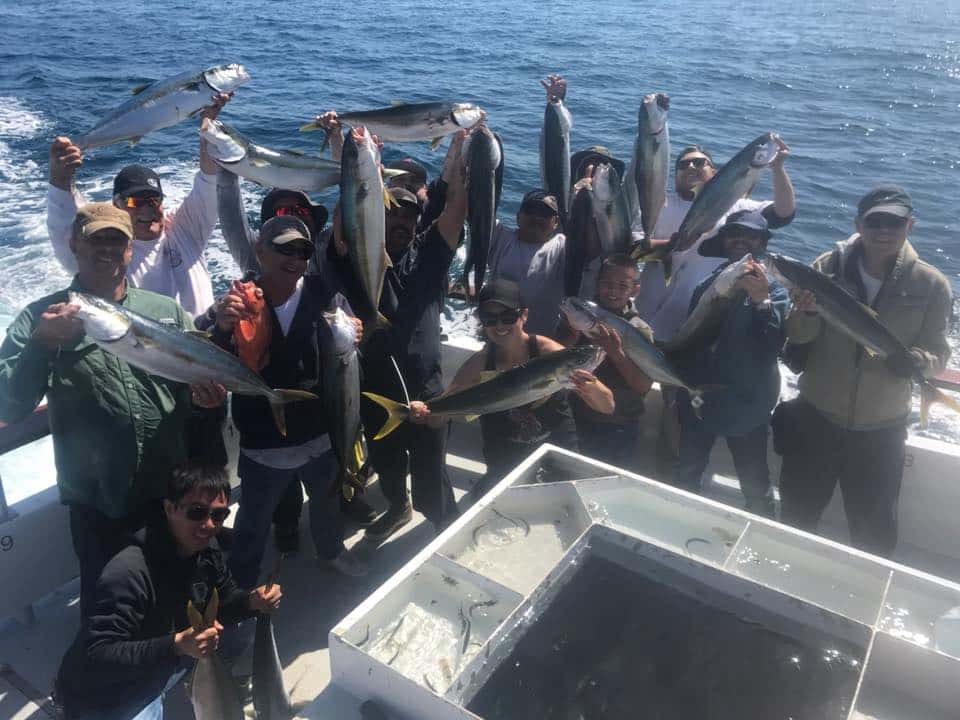 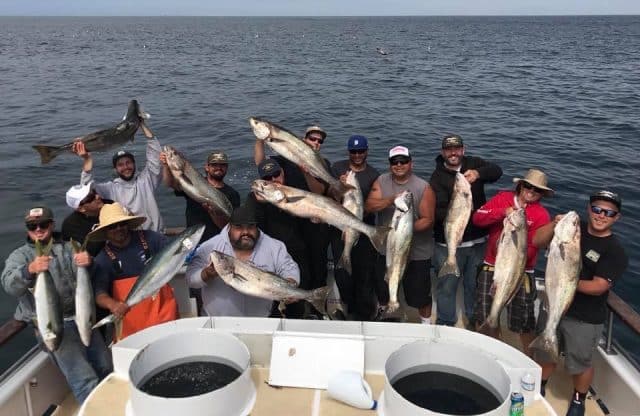 My recommendation for last weekend was overnight offshore from San Diego. As I look back at the counts over the weekend, I see that didn’t work out too well. The weather was a little tough and the counts reflected it. Seems like even the paddy yellows were hard to find (or was it the paddies themselves?).

Early season bluefin fishing…it is what it is.

Do I like the opportunity any less?  No.  They are around and they’ll bite sooner or later.  I’ll put it to you like this…if you want to catch tuna, then go. It’s a better than average opportunity.  If you score, it’ll be a good score…maybe even the fish of a lifetime.  I’ve said it many times before and I’ll say it again.  Any time you target the higher end species that we fish for (yellowtail, tuna, white seabass, halibut etc.), it’s a matter of cashing in on what may be only a small window of opportunity.  It’s only the very rare occasion that it’s so wide open that everyone on the boat scores.  And typically, if you wait to see those kinds of counts before going out, it will be a case of “Should’ve been here yesterday!”

You hear the captains say, “We’re seeing good signal…” If the boats are reporting seeing fish, but it isn’t translating into fish counts, then all you can do is go when you can.  The weather this weekend is not ideal.  It looks like there will be a morning window of opportunity before it blows in the afternoon.  If you can wait and fish Monday, it looks better, but may show signs of a wind hangover.  That’s when I’m planning to go.  I’m heading out Sunday night, fishing Monday.

I wanted to recommend the 805 last weekend. Capt. Shawn Steward of the Aloha Spirit had found some white seabass during the week and I was hopeful a consistent bite might emerge.  The reason I didn’t recommend it was that it was going to be blown out.  As we head into a full moon phase this weekend, I like the prospects for a ghost even better.  Again, Shawn found some fish during the week.  The picture on top is from Wednesday this week.  It was a charter trip organized by the captains of the New Seaforth in San Diego.  As you can see, they hit it big for limits of seabass.

Ghost sightings weren’t limited to the 805. The Ultra got a couple this week, and although I haven’t seen pictures, it was reported that the Reel Fun at Dana Wharf had limits on a half-day trip this week!

There is definitely signal

Even if things don’t end up working out this weekend on the seabass, there is abundant squid around which is always a good thing. 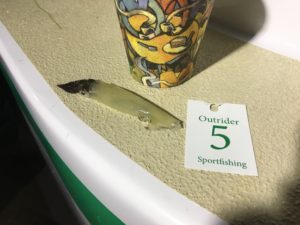 I went on back-to-back overnights last weekend to San Clemente Island.  As previously mentioned, last weekend wasn’t in that golden window, but the presence of squid had me hopeful.  Friday night I was on the Outrider.  Conditions were pretty tough on Saturday.  Capt. Tucker McCombs said he marked a big school of yellows pre-dawn, but we couldn’t get any to go.  No current at all.

One thing to note about the squid, it’s pretty small (right). Make sure you have some smaller size (2/0 or 3/0) Aki Twist hooks to be properly rigged. 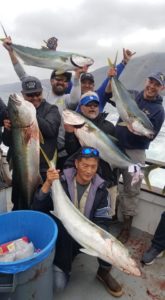 Sunday, I was fishing on my birthday charter aboard the Eldorado on a Sav-On Tackle sponsored trip. It was looking like more of the same, but right at the end of the day, we got surprise attacked by some bruiser homeguard yellowtail in 150’ of water.

I was in the starboard stern corner fishing whole live squid on a rockfishing dropper loop.  All of a sudden, my line was screaming.  Hot rail!  I wasn’t making any line on the fish as it pulled me across the stern.  As I got around the corner and made my way up the port side, I finally stopped it.  I was starting to get back some line and POP!  Dropper loop busted.

I had a high dropper pre-tied, so I was able to quickly swap out and get back in the game. Luckily I was able to get bit again.  Second fish wasn’t as lucky as the first.

It was a high casualty scenario.  Capt. Sal Salazar told me we landed 8 fish out of about 18 bites!  All the fish were big though…from 25-32-pounds!

With the full moon in effect, there will be good tidal movement this weekend. And there’s squid.  It should be good for both seabass and yellowtail.  The stars are aligning.  You should try to go.