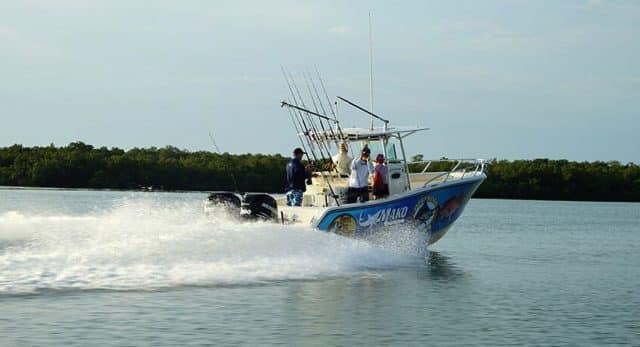 I recently returned from the first annual Mangrove Madness event in Marco Island Florida. I love fishing and exploring new areas in Florida and I jumped at the opportunity to attend.

The event was hosted by Navionics, Okuma, Raymarine, Yo Zuri, Cuda Brand Tools and the Naples, Marco Island, Everglades Convention and Visitors Bureau with the objective of putting their latest gear in the hands of the sportfishing media in real-world fishing situations. The island itself is a beautiful, small, beach town on the West Coast of Florida just above the everglades. The habitat consists of miles of mangrove-lined shorelines and backwater with the usual suspects hanging just offshore on wrecks and hard bottom patches. There were also many nearby bass lakes teaming with life. 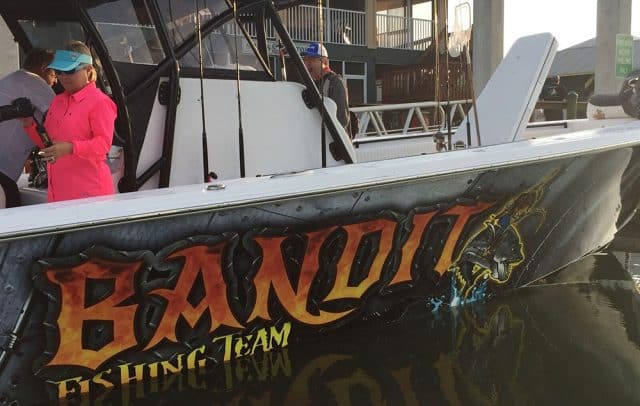 My first day on the water was on the Bandit a 37-foot Sea Hunter center console with Capt. Ron Mitchell. Ron is a tournament SKA Captain and his rig is set up to run far and fast. The weather was up a bit but the Sea Hunter made short work of it. The wind was blowing pretty hard and Capt. Ron made the call to stick closer to the beach rather than run the 60 miles offshore in rough conditions. 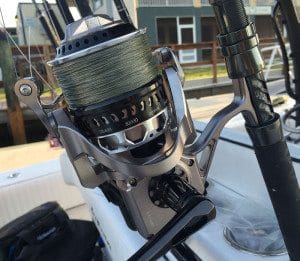 We started out on a shallow reef and worked it from top to bottom for a few smaller fish and couple sharks. Hoping for a kingfish in the area, I was able to finally try the new Makaira spinning reel for the first time. This new reel is designed to sit atop the spinning market just as the Makaria conventional reels have done. The new reel features a fully machined body, stainless gears and is clearly built to be fished hard. The reel is only one ounce heavier than a comparable Stella and looks to be beast-built for the offshore jigging and popping game. I can’t wait to get my hands on one of these to throw small lures at our finicky Pacific bluefin. 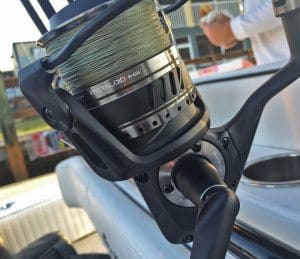 Also on board was the new Metaloid spinning reels from Okuma. Just like the conventional Metalloid reels that have become an instant hit, these reels feature a tough, no nonsense build and finish. After a few casts you quickly get the impression that this reel is an absolute workhorse designed to be used and abused. I was really impressed with the new spinning line up from Okuma. As spinning reels appear more and more on the West Coast, it’s nice to have some fresh options that are up to the task. 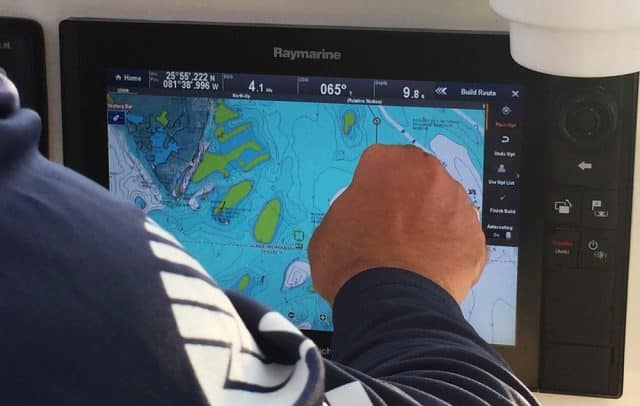 Mark Garland from Raymarine fished with us as well. Mark was giving us the lowdown and all the latest features of their new eS Series and specifically showing off the Navionics Sonar Chart Live technology. People have been trying to bring real time sounding data to charts for years but to date, I haven’t seen an integration that was simple and flat out worked.

I’d assume that even the premium mapping in your home waters works great on a big picture level just like mine. I’ll also assume you have a chart plotter loaded with “honey holes” that you’ve collected over the years. Now imagine personally mapping out those cherished spots with your own HD sonar mapping equipment (down to 1 foot resolution) for your use alone or you can even share the info via the web. Ultimately Navionics will be pooling all this data together to make better and more accurate charts around the globe. 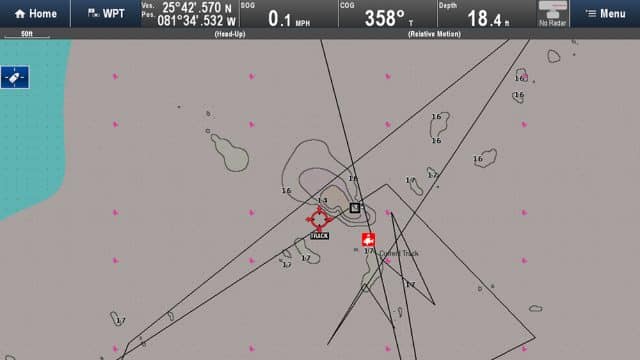 Above is an image of a shallow wreck we started on. You’ll notice that there is very little depth data EXCEPT for the areas in which we fished. The wreck was not sticking up more than a few feet off the bottom. The Sonar Chart Live has automatically integrated the sonar data right into the chart for unparalleled, first hand accuracy. 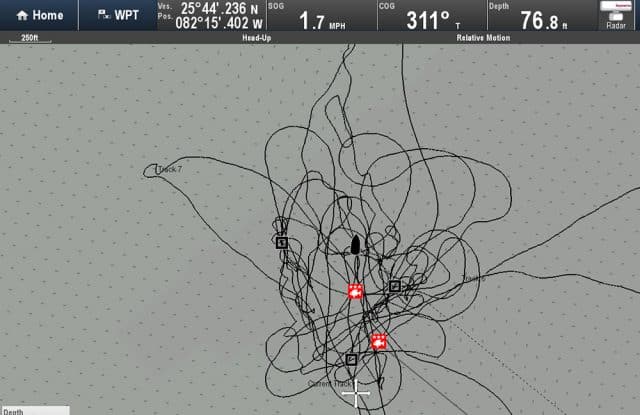 Now imagine “chopping” up your favorite spots with your sonar and using the updated charts to find those edges and terrain changes where fish hide beside just the single GPS # you’ve been using for years. Before you know it, you’ll have a very detailed map of your favorite spot that will more than likely give you several options for anchoring or drifting that you would have totally missed in the past. 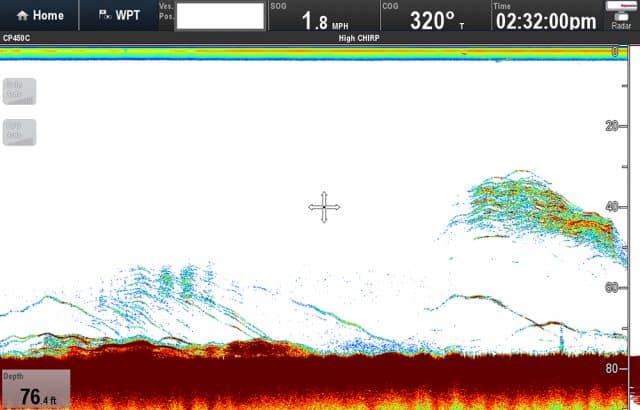 And of course you can use the sonar to confirm the terrain below is holding bait and/or gamefish. The image above depicts a school of blue runners and pilchards hanging out on a very small piece of structure. 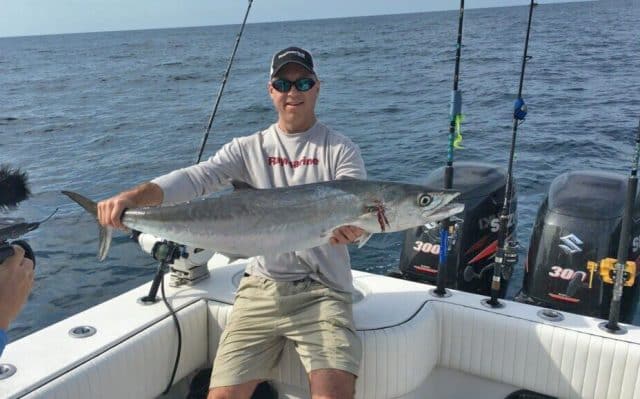 Find the structure, find the bait, find the fish. Here’s a great shot of Mark with a nice kingfish he scored aboard the Bandit.

One other cool piece of Navionics/Raymarine Tech that really caught my eye was a new feature called Dock-to-Dock Autorouting. 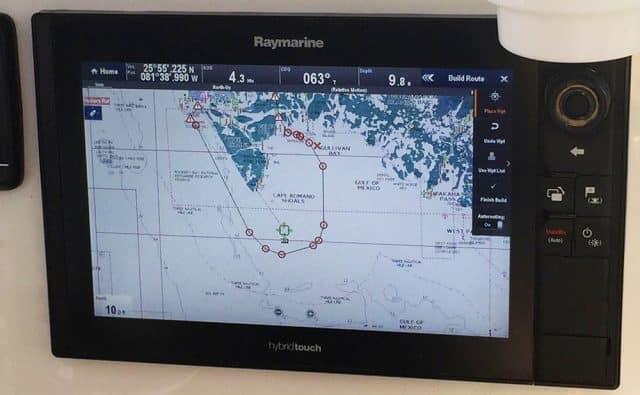 This feature combines the Navionics Chart data with intelligent trip routing to create a safe route to your destination while avoiding land, obstacles and shallow water. You literally tell the Raymarine unit where you want to go and it calculates the plots the most efficient route while keeping you and your boat safe of any obstructions. Of course you’ll want to double check the math, but it’s an awesome way to quickly create a route to just about anywhere. 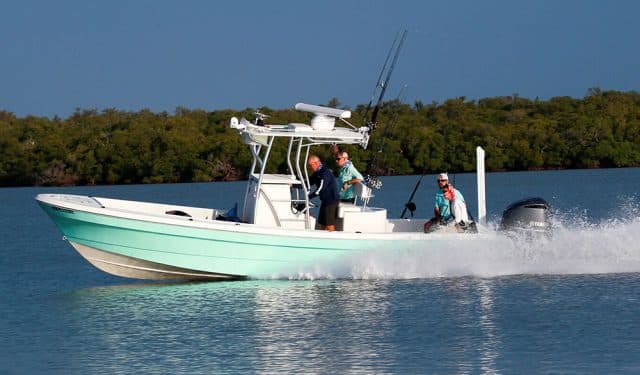 For the second day of fishing, I hopped aboard Paul Michele from Navionics brand new 26-foot Andros Panga. This little boat was bad ass and rigged to the gills with Raymarine tech and Okuma gear. Joining us that day would be Glen Law from Saltwater Sportsman and Alex Mai from TackleTour.com. We decided to run to a shallow wreck Paul had that was a bit out of the way. The wind was up but the Andros Panga got us there fast and comfortable. 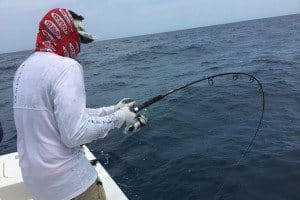 We got the anchor down and started a chum line. Alex was first to hook up. I can’t tell you how much fun we had watching a bass guy catch his first Florida bonita or little tunny. 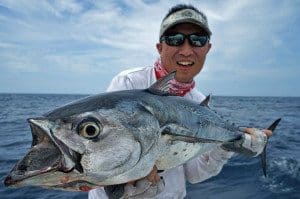 He couldn’t believe how hard the little tuna pulled and it gave him all he wanted.  After a few minutes, Alex won the battle.

Shortly thereafter, Dave hooks up to something that was screaming off line. 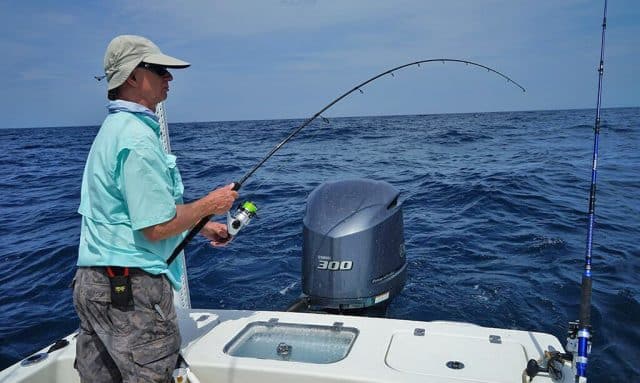 The Okuma Azores spinner was up to the task, but unfortunately the fish broke off leaving us to wonder… 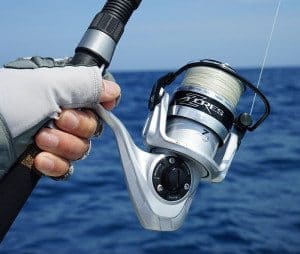 The Okuma Azores spinning reels matched up to the new Gulf Coast Series Shadow Stalker rods handled the inshore duties just fine. For bigger bottom fish, we switched to the Okuma Metaloids and they worked great.

After a couple hours of catching smaller snappers and several mystery bites, Paul made the call to troll the wreck and see what was patrolling the perimeter. 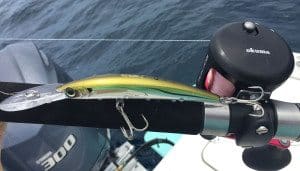 We put out a spread of Yo-Zuri Crystal Minnow Deep Divers and Hydro Magnum plugs. After several passes, we came up empty handed.

Yo-Zuri brought an arsenal of plugs and poppers to try out. More than a couple of these lures made it into my suitcase to try out back home. 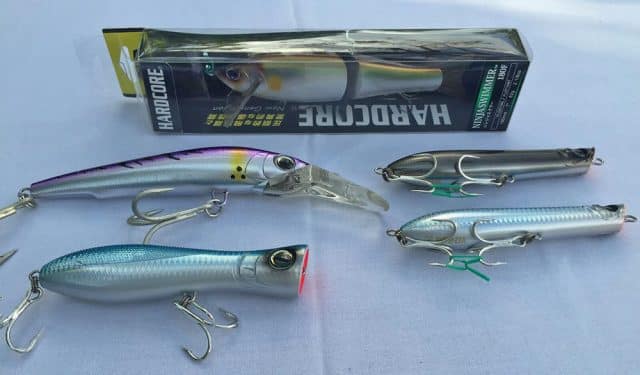 I’ve always been a fan of the Yo-Zuri poppers and I’m sure some of the new sizes will get crushed by our local tunas.

The Okuma/Savage guys were also on the trip and they brought a slew of cool lures to try out. While I’m no bass guy, these crazy new designs definitely caught my eye. Its clear Savage Gear has been paying attention to what many of the custom lure makers have been designing. These new lures were innovative and super detailed. The rat and duckling lures looked and swam like the real deal. 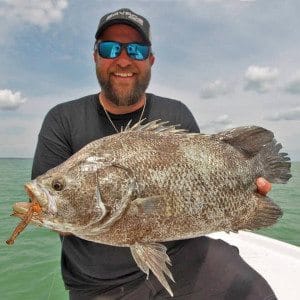 Mike Bennet from Okuma/Savage put the Manic Shrimp to work and scored this beautiful triple tail off a crab float. 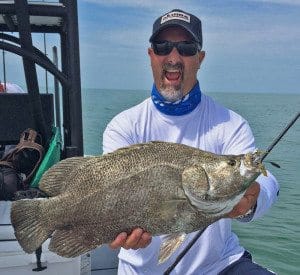 Not to be outdone, John Bretza from Okuma also caught a nice Triple Tail on the Manic Shrimp.

Cuda Brand Tools were also on hand and supplied all the anglers and boats with their tools. The most impressive product they brought was their new line of Professional grade knives. 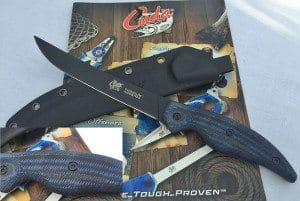 These knives are made from top quality USA Carpenter CTS40A Titanium Bonded ceramic NonStick steel and are incredibly well balanced. They also come with a bulletproof Kydex sheath. 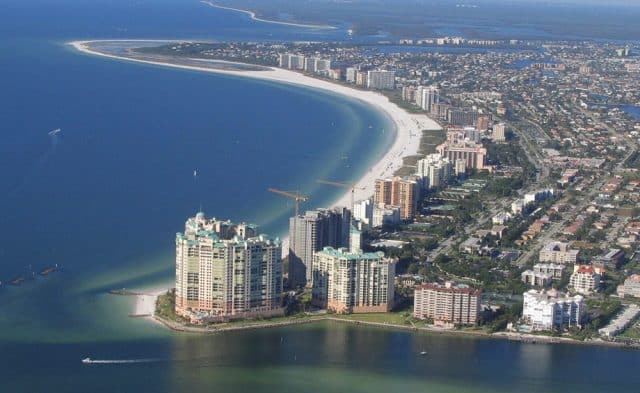 I want to thank Paul Michele at Navionics for organizing this fun little get away. I’d also like to thank Okuma, Cuda Tools, Raymarine, Navionics and Yo-Zuri for hosting us for the week. It’s always a blast to fish new waters and get to play with the latest in toys.

Marco Island is another one of Florida’s hidden gems.