I’m continually amazed as we learn more about the epic journeys that many tagged fish are taking across the oceans.

A prime example is this recently reported trip that a satellite tagged mako shark is making as we speak.

The Guy Harvey Ocean Foundation has been working with the Nova Southeastern University’s Guy Harvey Research Institute to tag and track many sharks of different species. The shark’s travels can then be tracked each time the shark comes to the surface and the tag can transmit its current location. 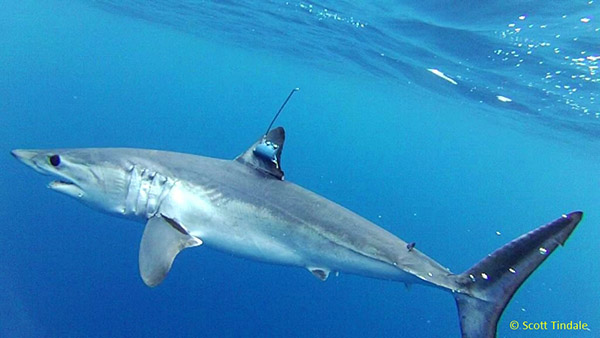 GHOF1 was the name given to one of 16 tagged mako sharks and the journey it is on is impressive. The shark was tagged and released off Ocean City, Maryland about five and half months ago. The shark is currently cruising the waters around Bermuda, but has traveled over 4,400 miles since being tagged. Having data that proves the large range of many pelagic sharks and gamefish, give managers a much better idea of the big picture and thus helps coordinate conservation efforts with other countries.

You can follow the path of GHOF1 and many others on an interactive website set up by the GHRI. www.nova.edu/ocean/ghri/tracking

Check out the ‘animate the path’ feature and watch GHOF1 patrol the edge of a continental shelf, before setting off for the current position in Bermuda’s waters.

About the Guy Harvey Research Institute at NSU:

Established in 1999, the Guy Harvey Research Institute (GHRI) at NSU is collaboration between the renowned marine artist, scientist and explorer, Dr. Guy Harvey, and Nova Southeastern University’s Oceanographic Center. The mission of the GHRI is to provide the scientific information necessary to understand, conserve, and effectively manage the world’s marine fishes and their ecosystems. The GHRI is one of only a handful of private organizations dedicated exclusively to the science-based conservation of marine fish populations and biodiversity. The research, education and outreach activities of the GHRI are supported by the Guy Harvey Ocean Foundation, AFTCO Inc., extramural research grants, philanthropic donations by private businesses and individuals, and NSU. http://www.nova.edu/ocean/ghri/index.html

The Guy Harvey Ocean Foundation is a leader in international efforts to protect our oceans and marine environments. The GHOF advocates for sustainable fishing practices, funds inspired scientific research and supports innovative educational programs. Our principle objective is to help ensure that future generations will enjoy and benefit from a naturally balanced ocean ecosystem where fish and other marine wildlife flourish. GHOF has led or assisted include the establishment of a shark sanctuary in Bahamian federal waters, the addition of five species of sharks to Florida’s protected list and the enactment of the U.S. Billfish Conservation Act. In the fall of 2012, the GHOF led a petition drive in support of the National Conservation Law in the Cayman Islands. The GHOF also assisted the launch of the first catch-and-release fishing tournament in Venezuela.