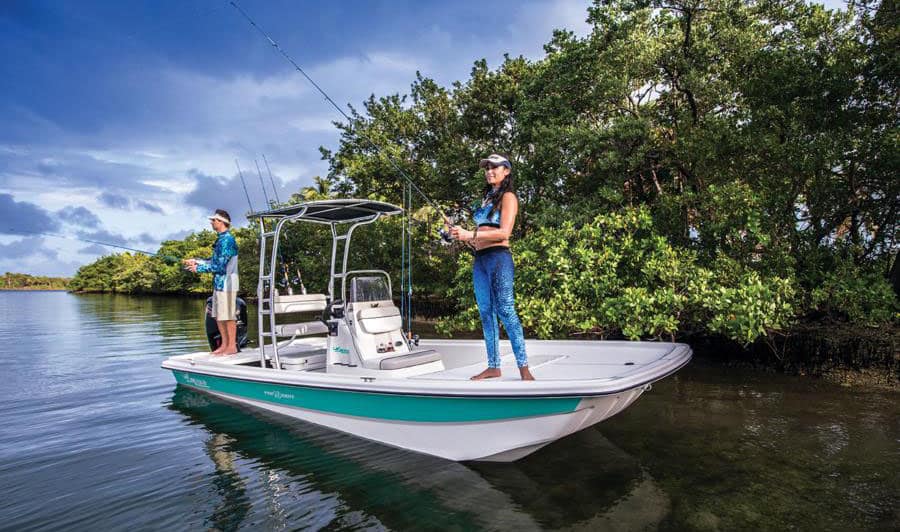 The Mako Pro Skiff 190 CC is an ideal choice for light tackle anglers on a budget.

Shop the market for a new center console fishing boat and you’ll see some rather mind-blowing price tags. Sure, there was a time when you could buy a decent if small fishing machine for less than the average price of a new car. But that time is long gone, right? For the most part it certainly seems so – until you run across a boat like the Mako Pro Skiff 19 CC, which shakes out at $24,390 for a complete package with a 115-hp Mercury four-stroke and a trailer.

Inexpensive is great, but “cheap” is not. So, when we inspected a Pro Skiff prior to taking it for a sea trial, we were happy to note touches like stainless-steel cleats, flex-free fore and aft casting decks with molded nonskid, and high-density marine-grade upholstery. Where you will see some sacrifices made to cut cost comes in the use of plastic. The console rodholders, hatches, helm rocker switches, and cup holders, for example, are all relatively low-cost parts. Some people will be bothered by that, while others will realize that it saves thousands on the bottom line and lasts for years regardless. Plus, Mako puts a five-year stem-to-stern warranty on the boat so you have some piece of mind.

Structurally speaking, Mako constructs the boat for the long haul. The one-piece fiberglass stringer system is foam-injected, the infused fiberglass transom is Coosa-cored, the hull to deck joint is both chemically and mechanically bonded, console fasteners are backed with aluminum plates, and all structural fasteners are stainless-steel. Bottom line: The Pro Skiff 19 CC may not exactly be diamond-encrusted, but she’s got the beef where it counts. The company knows it, which is why the boat additionally carries a limited lifetime structural warranty. (Check out Mako’s “Assurance” warranty to see the details).

Complexity in a boat adds a lot of cost, and the other way Mako maintains the uber-reasonable price is by keeping things simple. There’s a foredeck with stowage, an aft deck with stowage and a 25-gallon livewell, a console with six vertical holders, a forward console cooler seat, and a rotomolded helm chair that doubles as a cooler (which would be improved were a swing-back backrest added). That’s it – there’s no 500-watt stereo system, no underwater lights, and no track-mounted Yeti aboard. There are, however, a couple cost-adding options that some folks will want to consider: a bow-mounted electric trolling motor system can be added for as little as $1,680, and a “T-seat” T-top adds another $4,600 and change to the bottom line.

Cost be damned, one thing a lot of people will find interesting about the Pro Skiff 19 CC is how it handles on the water. Built atop Mako’s “Advanced Inverted V” hullshape, it most certainly doesn’t act like the average 19-foot skiff. In fact, it packs an air cushion similar to that of a powercat to help it coast smoothly over a chop. The boat also banks inward instead of remaining flat like many flat-bottom skiffs, is incredibly stable as weight shifts from side to side, and blasts off up to over 44 mph with the 115 four-stroke on the transom. When we ran the 19 CC it was on a relatively protected body of water but there was a stiff breeze creating a chop up to one foot, which presented no challenge to the boat.

But wait just one second, what’s an inverted V in the first place? Take a look at the picture, it’ll show you a whole lot better than any wordy description. 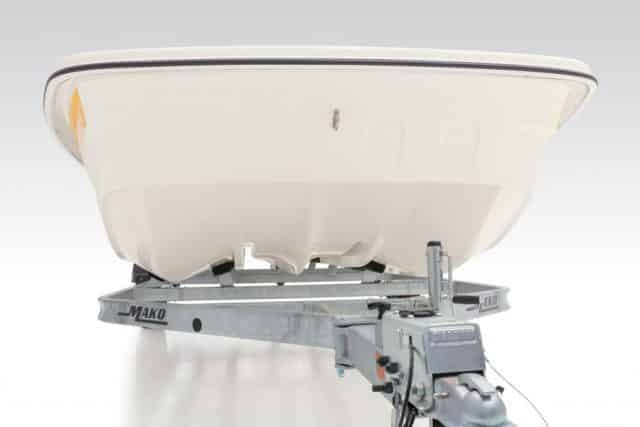 The inverted V hullform is very cat-like, though with a center appendage that’s very un-cat-like. The design does pack air and rides smoothly. The one potential downside we discovered was that in sharp turns it can feel a bit like the hull is skidding. Note: this design does not suffer from common catamaran issues like sneezing and snap-rolling.

Although we don’t usually dabble with land vehicles, we have to take a moment here to note that the 190 CC comes standard with a galvanized, single-axel trailer matched to the boat. It’s not a chintzy trailer, either, but has a swing-away tongue, four bunks, and Super Lube hubs.

So: are you going to run the Mako Pro Skiff 19 CC through the inlet when it’s blowing 20 knots? We certainly hope not. Will you ride it to victory in the White Marlin Open? Not likely. It is going to impress your friends and neighbors? Nah. But if you want a light tackle skiff that puts simplicity and common sense front and center, put off buying that new car – you can have this boat in turn-key condition, for even less.