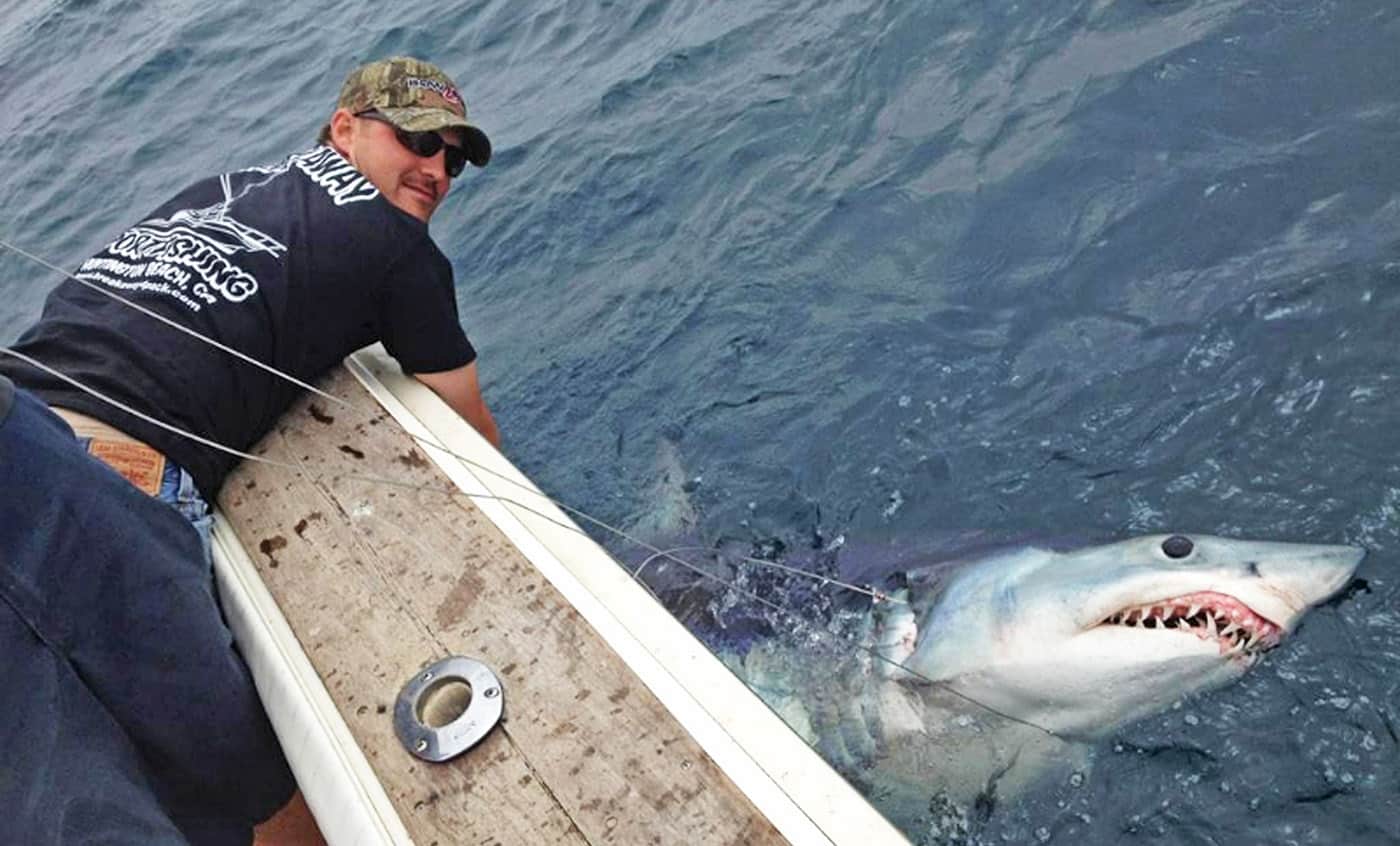 It’s been more than four decades since I first began fishing offshore in Southern California in our own boat. Yvonne and I, along with our crew, roamed the Pacific Ocean from our homeport in San Diego to as far south as Guadalupe Island and as far north to the waters surrounding the Channel Islands where a number of banks jut up from the ocean floor creating steep drop-offs which in turn produce current breaks. The baits that gather in these areas attract pelagic: marlin, tuna, dorado and, of course, a variety of sharks including mako and thresher, that have achieved gamefish status for many anglers.

Young and filled with enthusiasm, I’m afraid we weren’t very selective and targeted whatever happened to be biting. In the winter season, cow cod found in depths exceeding 100-meters were fair game if there wasn’t anything else biting. By spring, as the water temperatures slowly inched upward from the high-50s to the mid-60s, yellowtail, sand bass and even halibut held our attention. That is until the prolific surface fishery of albacore, bluefin and yellowfin began moving into the area from the south, soon followed by big eye tuna, striped marlin and swordfish. During many hundreds of fishing trips we made over the years, one constant was the ever-present sharks.

We would encounter blues, mako, thresher and even an occasional white.

Early on, whenever a mako or thresher showed up in the spread behind one of the lures, we viewed their presence as a nuisance.

For the past several decades, however, there has been a growing interest in targeting sharks along the California coast. The season for sharks in Southern California usually begins in May (depending on sea temps) and continues until late summer, while the marlin historically do not begin to arrive until late July, making the growing shark fishery an ideal warm-up for the anticipated billfish season.

Along with the growing number of shark fishermen, there are different successful styles used to capture these fascinating predators in Southern California, with chum slicks and slab bait being by far the most popular method. However, ladling a concoction of smushed bait mixed with God-knows-what out of a large reeking bucket while drifting along a current break with rods baited with large slabs of mackerel, bonito or yellowtail was a deal breaker for many offshore sportfishermen who viewed that style of fishing similar to soaking bait on some high-spot. They preferred to pursue their quarry with more aggressive methods. Beginning in the early 2000s there has been a growing contingency of anglers who have been willing to experiment with trolling techniques targeting various species of sharks with impressive results.

Since it was not uncommon to have both mako and threshers occasionally strike while targeting billfish or tuna, it wasn’t much of a stretch to assume that with some fine-tuning; targeting them with lures instead of the conventional drifting methods could be productive. Two of the early experimenters, Captain Conway Bowman and his partner Captain Dave Trimble, became the first captains anywhere to promote blue water flyfishing charters specifically targeting mako sharks. At that time, the idea of stalking mako, the consummate apex predator, with the flyrod was considered either fascinating or foolish depending on the imagination of the angler. Using a modified chum slick, bait and switch method, to lure sharks into casting range for clients off the coast of San Diego, their techniques, flinging feather-duster-sized flies proved so successful that Bowman Bluewater Guides and Outfitters prospered. While not trolling, their technique served to confirm that a variety of sharks could be enticed to eat something artificial if presented correctly. Another approach Bowman recently described is his “run and gun” tactic consisting of sight casting to free-swimming mako at first light during the full moon phase along the 100 fathom curve where the bait congregates on the surface a few miles off the San Diego coastline. While Bowman prefers fly, he acknowledges throwing a 12- to 14-weight with a large shark fly 50- to 60-feet can be difficult. Using a conventional bait-casting outfit with a large swimbait or popper, he casts to a finning mako. If there are slick water conditions, the swim bait is more productive than a popper that tends to freak out the shark. When you see a mako tracking in a straight line with their dorsal high, they are the more aggressive fish and the surface popper will work best. Bowman’s favorite swim bait is one of Patrick Sebile’s “Magic Swimmers” that the mako will often chase right to the boat. The size of these sharks range from pups to several hundred pounds.

At times, the sharks become very cautious. They are easy to spot as they swim in a straight line with less of the dorsal exposed. Bowman suggests that you cast the Magic Swimmer in front of them, let the fish see it and then begin the retrieve back to the boat. Usually you will lose sight of the fish as it follows the lure. That’s when they are sniffing and taking a look at it. As the swim bait comes closer to the boat, you can see the mako following, begin to accelerate your retrieve. Watching a huge mako attacking the lure right at the boat is pretty amazing! If size matters to you consider this: Captain Dave Trimble, owner/operator of “On the Fly Fishing Charters,” has handled the bulk of Bowman’s Bluewater Charters for the past eight years, logging well over 700 days of shark fly-fishing, releasing more than 1,500 sharks on fly tackle in San Diego waters. In September, 2006, his client Brendon Mason hooked a 12-foot mako estimated to be approximately 1,000 pounds on the fly and released it after 45 minutes, according to Trimble. This was well documented in Field & Stream, Saltwater Sportsman and Fly Fishing in Saltwater magazines as well as in this online video.

During one of Bowman’s “Flying Mako,” a catch-and-release tournaments, Alex Beck hooked an estimated 10-foot, 800-pound mako on a fly, with Captain Mark Martin and videoed by Keith Langford.

Both catches confirm that not only will mako sharks bite artificials; huge ones will bite them as well.

This is encouraging news for all would-be trollers who are considering shunning the “drift and chum” theory. Instead of sitting in one place waiting for the sharks to find them, they choose to fish for them in a similar fashion to how striped marlin are located in local waters – by covering more water.

Mako Matt, veteran shark fisherman, agreed to share his shark fishing skills finely-honed during the past 13 years. “Regardless of size, any boat equipped and rigged for offshore trolling targeting large billfish and tuna is good to go,” he began. “Becoming a shark hunter will demand a few adjustments in tackle rigging and trolling techniques, along with a huge attitude adjustment about how to deal with an animal that instead of a bill the size of a baseball bat has a huge mouth with seemingly endless rows of razor-sharp teeth that it uses ever skillfully in its day-to-day killing and feeding.”

“A unique feature off the California coast is that there is very deep water close to shore. Like most pelagics, the key is locating the marine life; birds and bait is the first priority before even slowing the boat down to trolling speed. Potentially productive areas generally will be bottom contours or high spots where upwelling might create natural temperature breaks where bait and sharks may congregate,” Matt continued.

“These breaks are easy to spot because of the eel grass and trash that pile up on the hard edge. When found, it is usually the warm side that the mako seems to prefer. However, choose whatever side has the most bait, or other fish-producing signs on it. It’s not necessary to troll right on the edge, but try to stay just far enough off the edge to keep debris from fouling the lures.”

Matt’s tackle choice is four rods with 30-wide Shimano Tiagra, 80-pound two-speed, 500 yards 80-pound Spectra, 100 to 125 yards of 80-pound top-shot. No bent butts, and Matt doesn’t use downriggers for mako, although he does for threshers. While trolling speeds will vary, 4.5 knots seems to be the ideal starting point for the heavier lures that are preferred. Using a downrigger or planers also may dictate a speed adjustment. Mako and threshers are known to bite lures at much faster trolling speeds than used for billfish; however the hookup ratio is much better at the slower speed.

Downriggers and planers, while not mandatory, are popular here in California, and in Baja for that matter, and continue to gain in popularity for a variety of pelagic; they are worthy of consideration.

While not common here in California, bent butt rods are preferred on boats targeting larger fish over 500 pounds, which allows for the more effective stand-up style, as well as allowing the lures that are designed to run straight in the water to do so better and the stand-up style also offers better hook-setting capabilities. If you plan on taking the fish, the equipment required is not different than that aboard any bluewater boat … but if you don’t have a large forged flying gaff for the large mako, one should be included.

Removing hooks from a ticked-off shark of any size without either party being injured is challenging. Release devices in general, and ARC Dehookers in particular, are a must from the standpoint of safely handling sharks. Many anglers make their own. However, if you are not handy at that sort of thing you can purchase one online. Caution: Don’t leave the dock without one. It will not only save a lot of grief and possibly pain, you can also recover those expensive lures you are dragging.

Over the past several years, the striped marlin fishery has diminished for one reason or another. During this time, the interest in the shark fishery has grown as more and more bluewater boats are seeking large fish to target in lieu of the disappearing striped marlin.

Since the State Record in California for striped marlin consists of far smaller fish, currently standing at 339-pounds, it is easy to understand why shark fishing, with weights up to 1,000-pounds, is catching on. However, many of the boats fishing the California coast are mostly equipped with lighter tackle which leaves them under-gunned for the monsters that roam the Pacific Ocean in this area.

Recently, Southern California – particularly the waters between the Channel Islands and Dana Point – has become one of the country’s premiere locations for catching mako weighing up to over 1,000-pounds.

And reliable eyewitness accounts from local shark experts indicate that there are much bigger specimens out there, just waiting for the right angler with the right combination of luck, skill and stamina.

Sean Carlsen Gizatullin, an angler aboard Vince Packer‘s 26-foot boat, also landed a monster 1,098-pounder 20 miles off Oxnard near the Channel Islands. The lightly-publicized catch, made after a 90-minute battle, was one of the largest fish ever caught off the Golden State.

Like the two hooked and released by Bowman and Trimble’s clients, it is clear there are monsters to catch for those willing to pursue them. Finding the monster mako isn’t so easy, because it travels alone. However, the fleet of boats and crews willing to put their time in is growing quickly as they see the potential opportunities to catch huge fish on their terms … trolling.

It only takes one monster mako to become hooked!