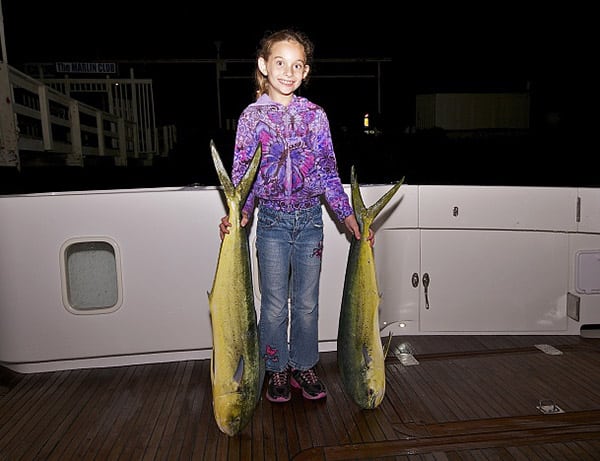 Nearly 300 anglers including 12 juniors and 13 ladies fished on 69 boats braving rough weather conditions while competing in this year’s 2013 Make A Wish Tuna Challenge. Anglers weighed in 53 yellowtail to 23-pounds, 24 dorado to 28.5-pounds, 20 bluefin to 43.6-pounds, 1 skipjack tuna and 1 released marlin. Bluefin tuna were few and far between, but 3 champion sized bluefin exceeding 36-pounds were weighed in. The Richard Thomas Memorial Grand Prize was taken by angler Brian Burke with a 43.6-pound bluefin while fishing about the “Reel Eze” captained by Dan Brown who also secured 3rd place in the larger boat division with a 19.2-pound tuna. Teammate Jeff Stewart took home 4th with a 18.4-pound shortfin and fellow teammates scored several other smaller bluefin. They were the only boat to make the long run down to the area outside San Martin Island and were rewarded as the larger boat division winners and high boat overall. Of note, they made a similar run 2 years ago and were on the way back with a winning catch when they ran out of fuel and missed the weigh in! The second largest tuna was caught by lady angler Maggie Osburn (wife of tournament chairman Brad Stiles). Her 39.2-pound bluefin taken on a black and purple Braid Speedster and garnered the high lady angler award and 1st place in the larger boat division. Maggie along with Brad, brother in law Captain Geoff, nephews, crew and myself fished aboard the “Endeavour” (2nd place boat overall) and caught the big tuna 10 miles outside the worm bank.

The third big tuna of 36-pounds was caught by Mario Souza on the “Green Bee” and Mario finished in 2nd Place in the Large Boat division.

The smaller boat division and outboard award winner was Mike Kaiser who released a marlin while fishing on the “Master Baiter” (no joke) at the 425 bank. The crew of the “Freeloader II” consisting of Nate and Sam Chrisholm and Jim Jameson put together a nice collection of large dorado and yellowtail (placing 4th, 5th and 7th) and took home the top boat honors for the smaller boat division. They along with the “Reel Eze” team won the coveted Tuna Challenge Championship Jackets embroidered with the Chuck Byron created Tuna Challenge logo as division winners. The top junior fish overall was taken by young Tianna Salerno who bested a 11.20-pound dorado to take home the title for the 11 and under juniors division. Tianna got seasick on the way out to the fishing grounds, but managed to reel in her nice dorado. Her smile on stage was worth a thousand words when she was handed her new rod and reel combination! First place in the 12-15 year old juniors division was taken by Aiden McGeehan with a 6.4-pound yellowtail.

The big number of course was the amount of money raised by the Tuna Challenge 2013 committee. Over $175,000 was raised that will go towards supporting the costs of providing wishes for Make A Wish kids with life threatening illnesses! A big call out to sponsors, anglers, volunteers and committee members who helped make many wishes come true for children in need.