Jeffrey Barr, PhD
How to Fish

One of the most common mistakes that offshore anglers make is to run the same route and fish the same spots, trip after trip after trip. It’s perfectly understandable because that’s how modern humans are programmed to think. Our everyday routines are filled with familiar locations and dependable outcomes – the favorite coffee shop on the corner of Hwy. 101 and Jasper St. to get that perfect morning buzz or that market with killer carnitas on the way home from the office. But when you really think back to those repeated offshore fishing trips to the exact same spots, how many times did you actually catch fish right where you were expecting to find them? Once every five trips? Or maybe only the first time you ran that route, but not again since?

The problem is that offshore species like tuna, dorado, wahoo, and marlin don’t spend their whole lives at fixed spots on the map. The open ocean is mostly an empty, barren desert with little pockets of productivity and life here and there – but these pockets are constantly on the move with ocean currents. And so, pelagic gamefish also need to stay on the move, to seek out and follow these areas where they can find enough food to survive.

The most successful offshore fishermen find these productive pockets of water, instead of blindly fishing the same old spots trip after trip.

How do they do it? They use satellite maps of the ocean, such as sea surface temperature (SST) and chlorophyll maps, to track the productive zones and catch more fish.

Most fish are exothermic, or cold-blooded: their body temperature changes with the surrounding water, which in turn affects their metabolism. When the water gets too cold, metabolism slows down and the fish don’t need to eat as much. It’s much easier to get a dorado to eat a live bait or jig in 71- or 72-degree water than in 67-degree water, because the dorado in cooler water literally isn’t as hungry. On the other hand, when the water gets too warm, it can’t hold as much oxygen and so the fish have a hard time breathing.

The result is that each species has a preferred temperature range, and pelagic species move around with the water circulation to stay within that range. Using satellite SSTs will help you find the areas that have the right temperature water for your target species – both where you might find them, and where you might be able to get them to eat your bait or jig. 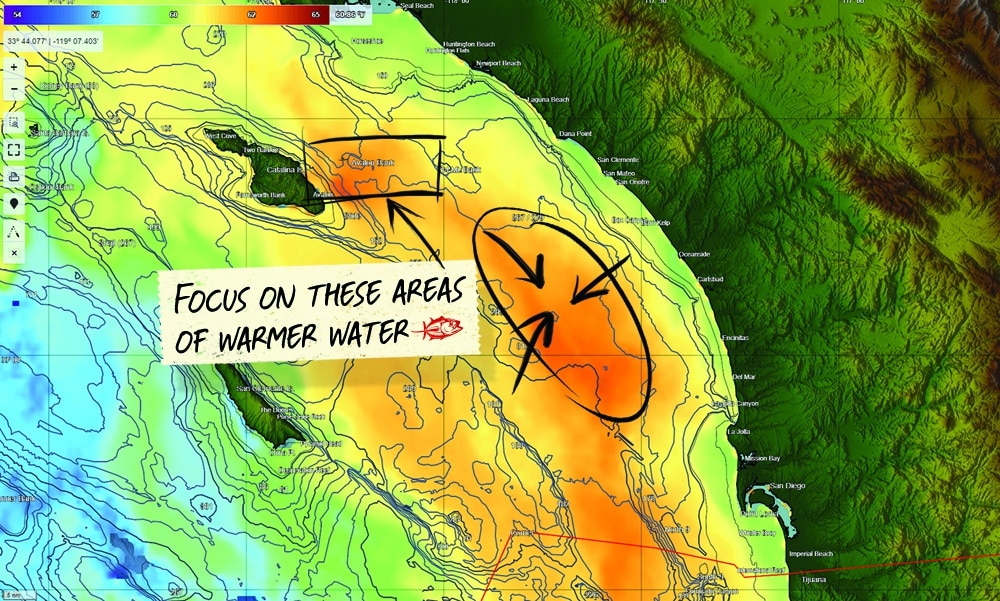 Thermal range: when regional water temps are near the low end of the preferred range for a species, working the warmest water in the area will be the most productive strategy for finding your target species.

Tunas are a special case. They’re able to maintain warmer core temperatures than the surrounding water by trapping heat generated by constant swimming muscle contractions. This means they can handle a wider range of water temps than many other offshore species, and it also gives them the advantage of boosted swimming performance over their cold-blooded prey. Bluefin tuna are champions at this, which may partly explain why you can sometimes find them in SoCal and northern Baja even during the colder winter and spring months. Yellowfin tuna, on the other hand, can’t trap heat quite as efficiently as bluefin and need warmer surface waters to warm themselves up, which is why you’ll be hard-pressed to find many of them in water colder than around 64-65 degrees.

Temperature can also indicate distinct water masses. Without getting too deep into fluid dynamics, a water mass is basically an area of water of a certain density, that hasn’t yet evenly mixed with nearby water of different density. Density in the ocean is determined by a combination of salinity and temperature, but in the open ocean away from coastlines and river mouths, surface salinity really doesn’t vary all that much. So, temperature accounts for a relatively high percentage of the variation in density and therefore is useful for distinguishing different water masses.

Finally, water temperature can also show other important oceanographic processes. A strip of extra-cold water along the California and Baja coast in the spring and summer is a sure sign of coastal upwelling, which draws cold nutrient-rich water up to the surface and kicks off our springtime plankton blooms. That sudden drop in water temp, though, will also kill any budding calico bass bites as their body temps drop and their metabolism slows way down. So, you can even use SSTs to point you toward reefs where upwelling hasn’t dropped water temps to boost your odds that bass will still want to bite.

Chlorophyll? More like bore-o-phyll, amirite? Well, not quite, Billy Madison. In the open ocean, chlorophyll is where the action is – it’s produced by the phytoplankton at the base of the food chain, allowing life to flourish. Zooplankton eat phytoplankton, and small baitfish eat zooplankton and phytoplankton. In turn, bigger gamefish like marlin, tuna, wahoo, and mahi chase down these smaller baitfish.

The tradeoff is that lots of chlorophyll also makes the water really murky, which makes it easier for baitfish to hide from bigger predators. In general, predatory gamefish like albacore patrol along the cleaner edges where they can easily see any baitfish that get caught out from their safe hiding spot in the murky water. But other species, like bluefin tuna, don’t mind the dirty water and will plow right into it where most of the food is. 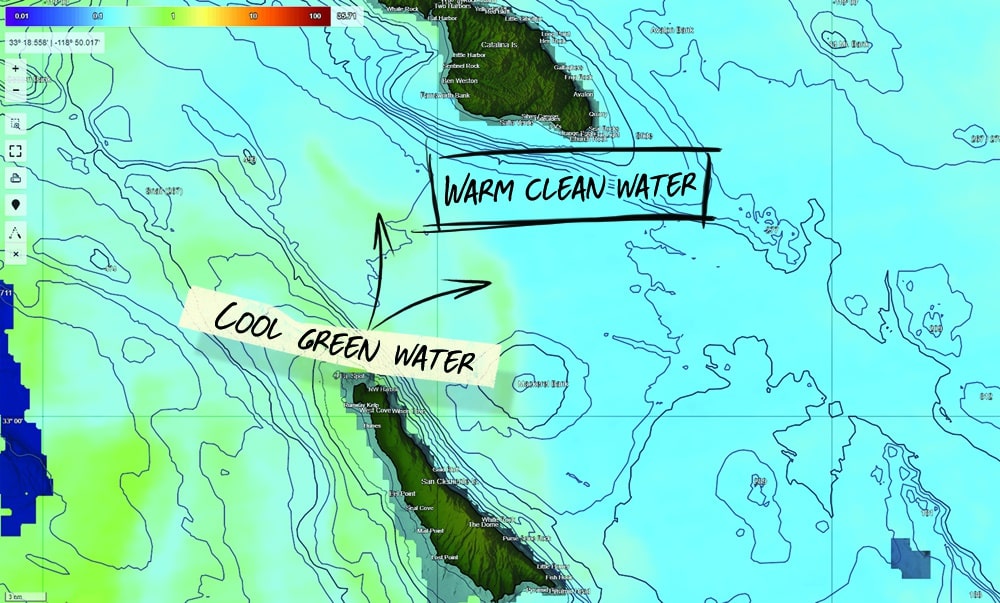 Chlorophyll: High chlorophyll levels mean lots of food for baitfish and murky green water to hide from predators – but these tuna don’t seem to mind.

Chlorophyll, like temperature, is also a good indicator of different water masses. Colder water is able to hold more dissolved nutrients that plankton need to produce chlorophyll, so you’ll often see areas of cool, green, nutrient- and phytoplankton-rich coastal water extending out as filaments or eddies into clean, warm offshore water. These boundaries can be especially productive zones to look for offshore gamefish.

You often hear that fish “stack up” on breaks, or places where the water temperature or color changes rapidly over just a mile or two. Baitfish are on one side of the break and gamefish patrol the edge, waiting to pick off any bait that strays across the line – or so the theory goes. It sounds simple enough, but that’s exactly the problem: it’s too simple. Sometimes really strong temperature breaks that change as much as 4-5 degrees are completely barren of life, while a break of less than half a degree just 10 miles away is loaded with tuna. Other times you won’t find any life until you’re 3 or 4 miles away from the actual break. And why should a gamefish stay on its side of the line in the first place, if all the food is just on the other side?

In reality, breaks are still a useful roadmap to finding pelagic gamefish. But, understanding the more complex oceanographic dynamics at play will help you read the roadmap better and stay in the productive zones longer.

First, sometimes these breaks actually do form fronts and convergence zones – narrow strips of water that accumulate life right on or near the break. Convergence zones form when ocean currents collide into and/or slide past each other, gathering drifting flotsam like kelp paddies and weed lines. These, of course, attract baitfish that hide in their structure, along with gamefish like dorado and yellowtail that both eat the bait and use the structure to hide from their own predators. The physical mixing of the two water masses along the narrow strip where they meet can also create plankton blooms and attract filter-feeding baitfish and the gamefish that follow. 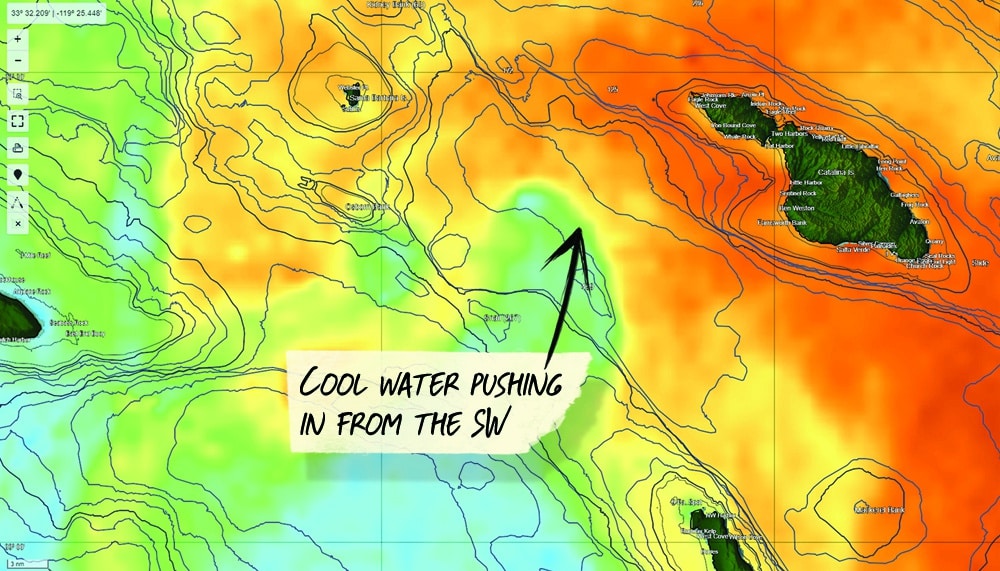 Convergence zones: Temperature breaks can indicate convergence zones that gather flotsam like kelp paddies – and the fishes that use them for both food and shelter, like yellowtail and dorado.

Even if the break isn’t a strong convergence zone, though, it still likely marks the boundary of different water masses, some of which will hold more life than others. If you’re trolling along and getting steady jig strikes but then cross a slight temp or color break and your bites dry up, you’ve likely crossed into a different, less-productive water mass. The break didn’t necessarily have all the life right nearby, but it can be a useful indicator of where the good, productive water ends. In this case, you should turn around and work back through the water mass that produced all your jig strikes. A quality high-resolution satellite image can show you which direction the break runs, so you know which way to point your boat to get back into the productive water. 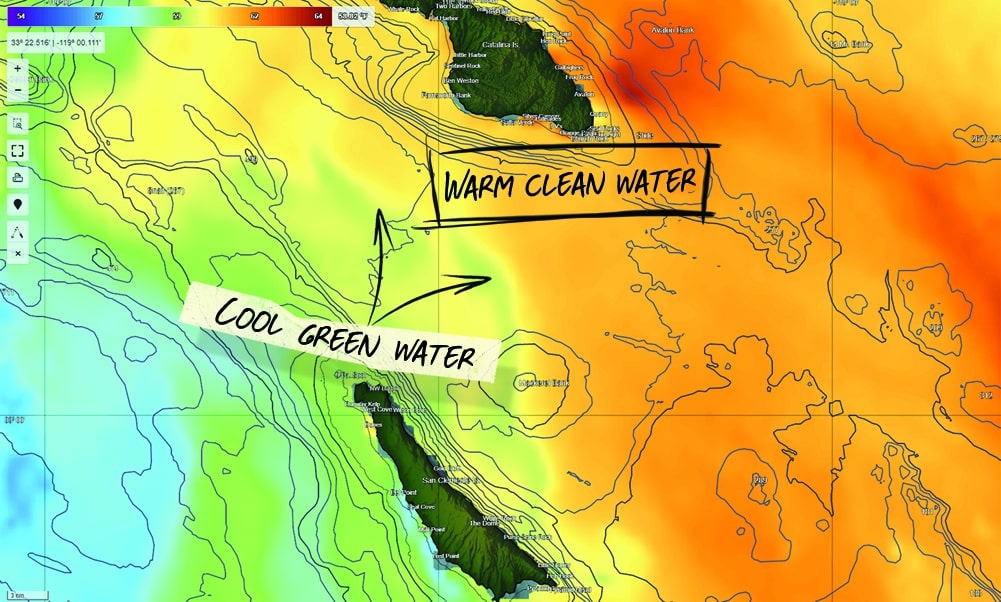 Finally, it’s important to remember that satellite maps paint a picture of the ocean surface, but not necessarily what’s below. The open ocean is a dynamic three-dimensional volume of water extending thousands of feet deep, and of course, gamefish aren’t always right at the surface, either. A temperature break on an SST image doesn’t always extend straight down vertically – it can angle in or out as it gets deeper, even over several miles horizontally. If tuna are holding at 20-30 fathoms deep, they may still be on the same temperature break that hits the surface a couple of miles away.