The way the bluefin tuna bite has been the last few seasons, getting bit can often be as simple as finding a foamer and casting a popper into the middle of it, boom. 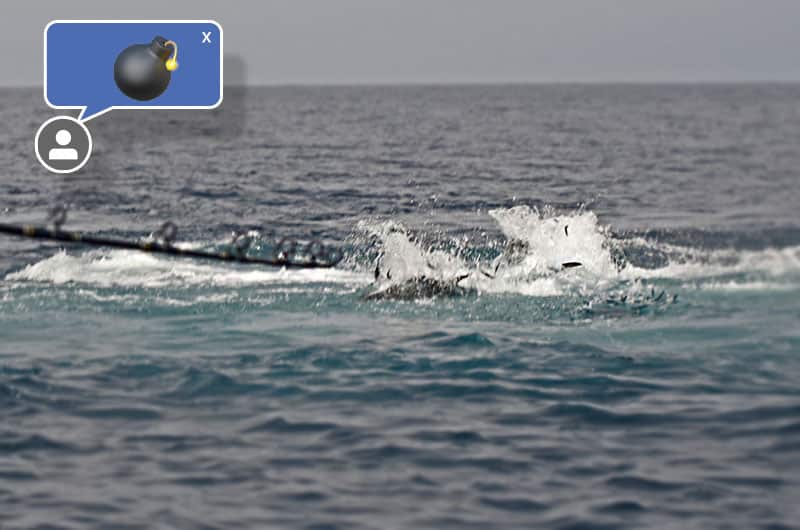 While those days are great, there are plenty of days when finding a foamer is tough and even when you do find one, the fish are so keyed in on small anchovies that it can be almost impossible to get them to commit to a bigger lure. On those tough days, anyone who’s spent time targeting bluefin knows that having a variety of lures in your tackle box can spell the difference between success and failure.

Before I get into the specifics of the lures I like to fish for tuna, I’d like to take a look at how these fish behave. Starting with foamers, I’ve seen enough aerial shots of them to know that the whitewater is just the center of the feeding activity. In most cases, the whitewater represents the spot where a school of baitfish is balled up on the surface. While there are potential bites to be had in the middle of the foamer, those fish aren’t just sitting in the middle of it feeding. Tuna are always moving forward and, since they don’t bend in the middle, aren’t known for making the tightest of turns when doing so. 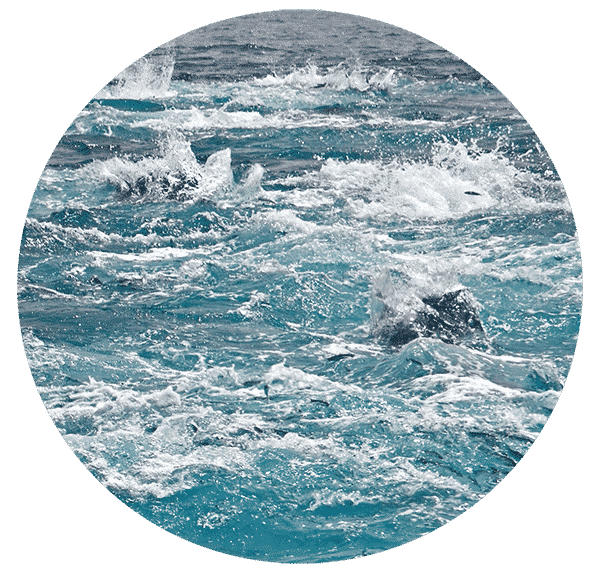 As such, the tuna that just slashed through the bait ball at speed is going to travel some distance before it can turn and make another pass. Depending on the amount of fish in the school, a tuna’s trajectory can put the outside of its swing a hundred feet or more from the foamer itself. The reason this is important to note is because the tuna doesn’t lose its interest in feeding while making a turn for another pass at the bait ball.

So, by casting your lure into a foamer, presenting it through the melee and retrieving it, you’re basically missing out on targeting all of those fish. Likewise, when you fish a popper and get clear of the foam, you might still get a bite in open water. Due to the “pop and pause” cadence of the presentation, though, you might get a fish’s interest with the popping commotion, only to have it arrive at your lure when it’s being paused and pass on biting it because it doesn’t look like a baitfish while it’s sitting idle in the water.

Some days the fish don’t care and will bite it anyway, but some days they won’t.

Rather than relying on the lucky timing sometimes associated with popper fishing, I’ve switched entirely to hardbaits that allow for a continuous presentation. By eliminating the long pause, any fish attracted to the lure from a distance will be met with something that is a reasonable enough representation of a baitfish to trigger a strike. In fact, since I made the switch to fishing hardbaits, I haven’t had a single trip where poppers got bit and hardbaits didn’t. 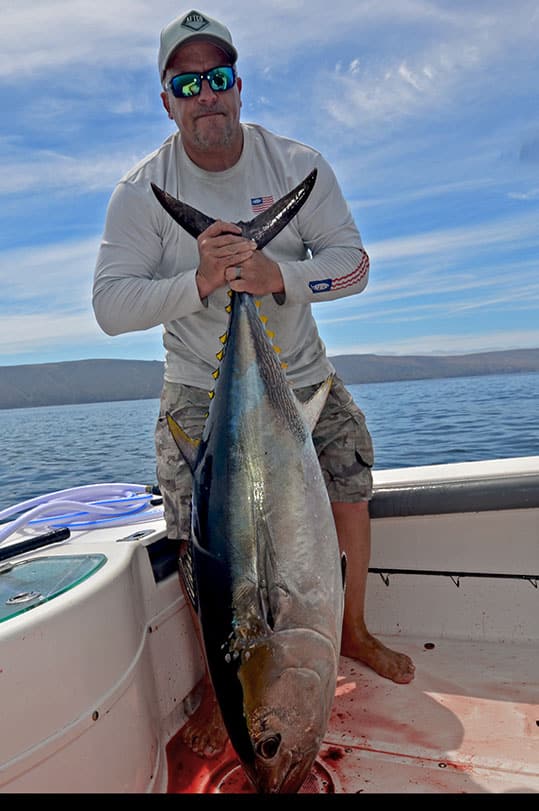 There are a huge variety of styles, sizes, and colors of hardbaits on the market, and while I’m sure all of them work in different situations, I’ve narrowed my arsenal down to just two lures. If you’re new to hardbait fishing, I suggest going out and buying whatever baits you think look good. But while you’re shopping, I recommend picking up a sardine-colored Yo-Zuri Hydro Pencil and a silver Rapala Subwalk 15.

Both are walk-the-dog style baits, the former on the surface and the latter sub-surface. Over the last few years, I have yet to have a trip where the fish were biting and wouldn’t bite one or both these baits. Though similar in design, the two lures offer different presentations and are fished on different outfits.

Starting with the Hydro Pencil, which only weighs 1 ounce but casts like a much heavier lure, I use a Rainshadow Judge Series 810ML rod matched with a Revo Toro Beast 50 reel filled with 65# braid. This beefed-up bass rod casts the bait well and has accounted for multiple 75 to 100-pound bluefin on my boat.

This is my go-to bait when targeting bluefin and yellowfin that are keyed in on micro bait. I’ll present the lure by casting it into the foamer and deploy very short sweeps of the rod to move the bait less than a foot at a time while I pick up slack with my reel. If the fish are in a cooperative mood, I usually won’t get past the first or second sweep without hooking up. But if they aren’t and I get to the edge of the foamer without getting a bite, I’ll drop my rod tip to the water and turn the handle as fast as I can.

That action will take the bait subsurface and give it a tight kick as it’s running through the water. My impression is that it looks like a baitfish that has broken from the school and is racing to escape. This seems to really get the tuna fired up and I’ve had tuna race in and hit the lure so fast that they’d be under the boat and out the other side before I could even catch up to my slack line. This is the only situation in which I’ll throw this lure, but it works well enough that I always have one tied on.

The Subwalk is a much more versatile lure, but it’s not designed for offshore use so you’ll need to change out the hooks and rings before you take it fishing. I swap my hooks out with 2/0 Owner 4X trebles and heavy Hyperwire split rings. These hooks are significantly larger than the stock hooks but won’t negatively affect the lure’s action, what little of it there is. My go-to rod and reel combo for this lure is a Rainshadow RCLB 80M matched with a Penn Fathom 25N star drag full of 80# braid. This set up works fine for fish up to 125 pounds, but as Matt Kotch learned a couple of seasons ago, it will kill you on 200 pounders, so cast wisely.

When fishing around foamers, I’ll start my presentation off with the same short rod sweeps I use with the Yo-Zuri. But once past the foam, I’ll switch to a very long sideways sweep of the rod, followed by quickly picking up my slack line and repeating. The only drawback to this presentation is that it packs the line loosely on the spool, so every few casts, I’ll make one and just wind the lure straight back to get the line tight on the reel. 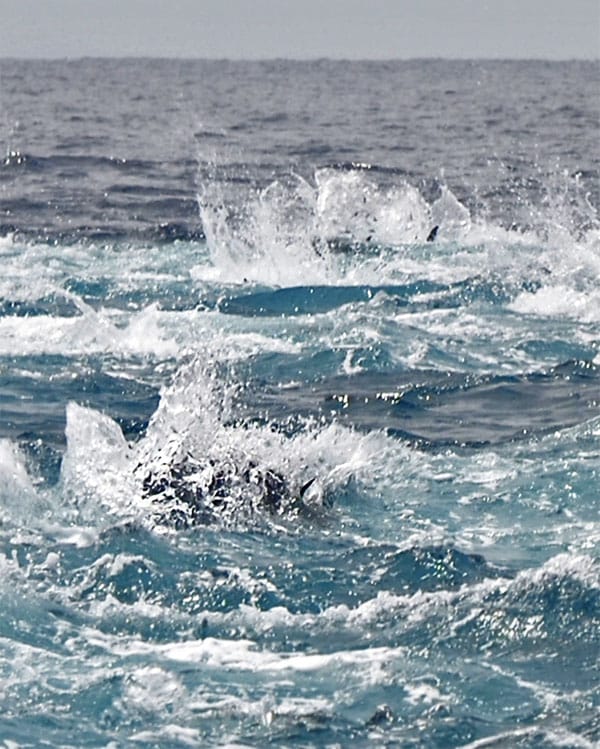 While the Subwalk is a great lure for fishing foamers, it really shines when targeting fish that are feeding subsurface. When the fish are up foaming, the casting target stays pretty stationary but the fish tend to move around a lot more when they’re chasing bait below the surface. In these situations, it pays to figure out the direction the fish are moving and then set your boat up ahead of them in a position that allows you to present your bait perpendicular to their line of travel.

In this case, I’ll make a long cast ahead and to the side of the school and make the same long sweeps of the rod tip, followed by picking up slack. If the school is big, or not moving too fast, you can get multiple casts on them, but once they’re past you you’ll need to move the boat ahead of them and repeat the procedure.  Since tuna can only look up, out and forward, the key to this presentation is to position your lure in a manner that will give them time to see it, turn on it and eat it.

If you’re casting to the location where you see them, they’re going to have passed that spot by the time your lure hits the water.

The best advice I can offer when fishing hardbaits, or any other lure for that matter, is to always take a minute to look at what the fish are doing before charging in and firing off a cast. If you watch the direction and speed at which they’re moving, you can predict where you’ll need to put the boat to be in a position to put your bait in a location that they’ll not only be able to see it but react to it before they swim past. 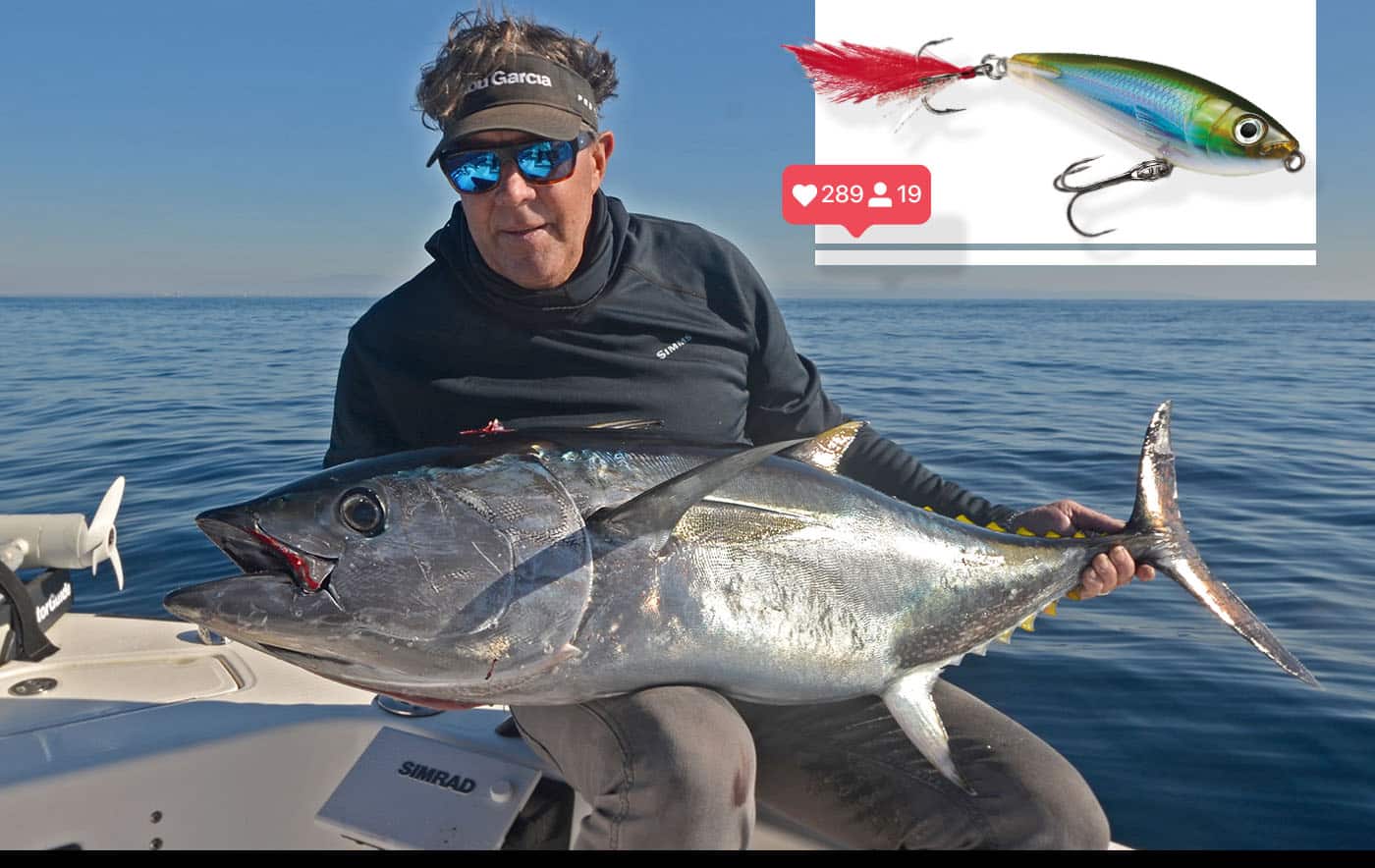