What’s new in the world of fishing boats and gear for 2020?  Will all these techno-gadgets really help you catch more fish?

You want to stay up to date on what’s hot, what’s new, and what will help you catch more fish? We thought so – and we’re here to help. 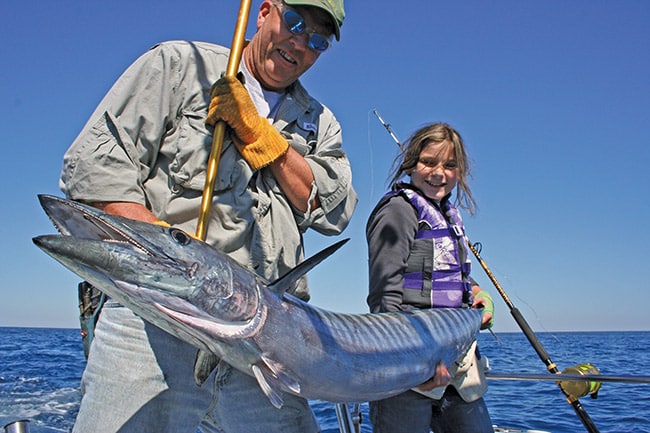 Considering how quickly modern tech advances, it’s nearly impossible to keep up with the latest and the greatest unless you make it a full-time job. So that’s exactly what we do, and we’ve been keeping our eyes out for any and every new development. Here are some of the top teched-out fishing boat features, tools, and technologies that we think can help make your 2020 a year of serious angling achievements.

Getting your boat into exactly the right fish-catching spot and keeping it there has always been a challenge, but it’s one that’s been made much easier with technology. GPS and then its integration with fishfinders revolutionized this part of the game, but now the importation of navigational abilities into sonar itself has become not just possible, but even commonplace. The key ability? Being able to touch the fishfinder screen where you see the structure and/or a cluster of fish, and set a GPS waypoint at that spot. Then you can switch over to or split-screen with the chartplotter, and navigate right back to it. At first, this feature showed up on a unit or two, then it spread, and now just about all the manufacturers offer it at some level in the model line. If the fishfinder sitting at your helm doesn’t have this ability, upgrading your electronics will give you a serious leg up.

Another way you can enjoy better boat positioning: take advantage of the latest in marine bathy charts. In the past year, we’ve seen updates in chartography like Garmin’s g3 data with high-res depth shading, Raymarine’s Lighthouse NC2 charts with data from Fishing Hot Spots, and C-MAP’s Precision Contours with contour lines down to one-foot increments. At the same time, the ability to draw your own contours has been expanding while also becoming simplified. Whether you do it via the C-MAP Genesis system, Navionic’s SonarCharts, Raymarine’s RealBathy, Humminbird’s AutoChart Live, or Lowrance’s Genesis Live, you can set up your MFD to record the fishfinder pings and GPS positions and create your own uber-accurate bathymetric chart – often in real-time.

When it comes to fishing and boat positioning, perhaps the most important recent development, however, has to do with how you hold your position. Minn Kota made the anchor obsolete when they introduced Spot-Lock GPS virtual anchoring, and many of us have taken to utilizing this feature to hold a boat in position without the need for an analog anchor. But while the cat came out of the bag on this ability long ago, in recent times your virtual anchoring options have expanded widely. Today on larger boats the outboards can do the work, with systems like Yamaha’s Helm Master, Mercury’s Joystick Piloting, and SeaStar’s Optimus. Just press a button to hover the boat in place over a wreck or reef, or tap the joystick to move a few feet in any direction as you work over the productive bottom.

Though virtual anchoring has been around in a number of forms for several years, there are three new entries into this market that are sure to make waves in the coming year. Both Lowrance (the Ghost) and Garmin (the Force) introduced new brushless-motor electric trolling motors this year. Both integrate fully with MFDs to provide complete position-holding control, and although these new electrics are designed for freshwater use, it’s a fair bet that saltwater models will follow. Finally, Minn Kota has upped the virtual anchoring ante with a monstrous 87-inch shaft Riptide Terrova model. Thanks to that incredibly long shaft length and 112-pounds of thrust, this bow-mounted electric can Spot-Lock a boat up to 30 feet in length and 10,000 pounds of displacement.  Rhodan is also a huge player in the “big boat” trolling motor market with a whopping 96″ shaft topping their line of options.

Side-scanning sonar is nothing new, but the abilities today’s units offer most certainly are. Several now incorporate super-high frequency ranges (Humminbird’s Mega Side Imaging+ and Raymarine’s HyperVision) up to 1.2 MHz. While using uber-high frequencies does limit range (to about 100 feet in either direction), it does also provide spectacular detail and the ability to pick out both fish and structure well away from the boat. Talk to any captain who’s used these units extensively, and they’ll verify that the ability to see port and starboard in radical clarity can be a game-changing ability. And dropping the output to lower hertz ranges still provides for looking even farther off to the sides, albeit with lowered detail levels.

If you’re a NavNet TZtouch3 fan, also worthy of your fish-finding attention in 2020 is Furuno’s new Deep Impact DI-FFAMP. This is an amplifier designed specifically for the TZtouch3 fishfinder, which utilizes both CHIRP and continuous wave signals to pulse two- or three-kilowatt signals down through the ocean and attain more depth penetration than previously possible.

Another area we’ve seen leaps and bounds when it comes to seeing things: radar. Whether you’re looking for birds beyond visual range or trying to locate that buoy the fish are swarming around, maximum sensitivity is critical. Simrad’s new HALO20 (24nm range) and HALO20+ (36nm range) pulse compression radar antenna boost update speeds at close ranges to near real-time, with up to 60-rpm sweeps. At the opposite end of the spectrum, Furuno’s latest radar, the X-Class, can peer out to 96 miles across open water – yet also has short-range detection down to 20-feet.

Okay, so maybe it won’t help you catch more fish, but the new Cortex from Vesper will boost your safety margin – and that’s something any boat-owning angler can appreciate. By combining a VHF radio with SOTDMA AIS and a cell-based remote monitoring system, then placing the package in a phone-like handheld controller with a four-inch touchscreen (a hub sits belowdecks), the Vesper becomes an all-in-one communication and safety system. We tried one out and found tasks like making a DSC call, activating AIS MOB, or tapping into NMEA network system data, were all fast and intuitive.

Another communication device that’s become integrated into our boating lives is the cell phone. Whether you’re just calling and texting or you’re dialing up a fishing or navigational app, chances are that you use your cell phone on your boat – and there’s also a pretty good chance you’ve cursed a dead cell phone battery more than once. Enter, the ROKK Wireless Waterproof Charger, the first IPX6 waterproof-rated wireless phone charger designed specifically for marine use. You can mount this little disk under the dash, and when you sit your cell phone at the helm it’ll draw a charge. There’s also a cradle-mount version available for surface-mounting at the helm.

What new fishing and boating tech will we see developed in 2020 and the coming years? That’s anyone’s guess. But we all know one thing for sure: it’ll be a full-time job trying to keep up with the latest developments. So, stay tuned, people, stay tuned. 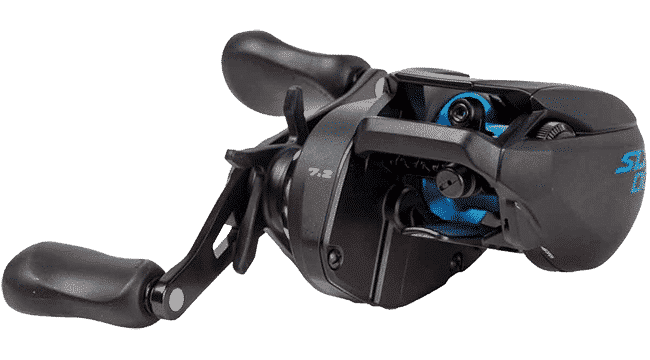 It’s rare that tech developments in the world of fishing reels are substantial enough to change the way we fish. But when Shimano introduced the I-DC4 braking system, which utilizes a microcomputer to constantly adjust spool braking and virtually eliminate backlash, we found it just about impossible to get a bird’s nest even if you tried to make it happen. The one problem? You had to drop big bucks to get a Curado DC with the tech. But that’s no longer true, with the SLX DC 150 series reels. These come in well under the $200 mark and get I-DC4 power into the palm of your hand.

Entropy assures that whenever you put a bunch of pieces-parts together, over time, they will eventually fall apart. This goes for everything we build, including fishing rods… or does it? The 13 Fishing Fuse is constructed in a new and totally teched-out manner, with a (patent pending) carbon fusion process that melds all the parts into one seamless piece. That means vibrations travel through the rod and into the reel seat and grips without interruption, providing the ultimate sensitivity.

Eye in the Sky

Ever wish you could film bird’s eye view of the action on your boat, send a bait or lure 20 casts away, or remotely scout for weedlines and tailing fish? Sounds like you need a drone, and if you have a Raymarine Axiom at your helm, you can enjoy fully-integrated drone control (for DJI Mavic Pro, Pro Platinum, 2, and 2 Zoom models) right at the helm. You can also see what the drone’s camera sees displayed on the MFD, see the drone’s position and direction of travel on your chartplotter screen, and use automated flight controls (like shadow the boat, orbit it, or return to it).

These are just a few of the highlighted fishing tech products for 2020 and beyond.