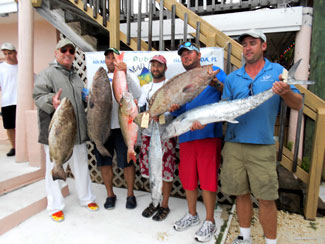 Rough weather did little to stop the anglers who showed up in Islamorada, Florida, to fish 4th Annual Mad Dog Mandich Fishing Classic. A total of 92 anglers took part in the tournament despite wind, non-stop rain and 5-foot-plus seas. It was worth it! The 21 participating boats weighed more fish than ever before and everyone managed to enjoy the weekend, all while helping to raise money for Mariners Hospital.

The tournament, which benefited the new Oncology Services at Mariners Hospital, is named after Jim “Mad Dog” Mandich, a former tight end for the University of Michigan and a Miami Dolphin from 1970 to 1977. Following his NFL career, Mandich was involved in a number of business ventures and was the color commentator on Miami Dolphins radio broadcasts. He died in April 2011 following a battle with bile-duct cancer.

Anglers in the event fished for dolphin, kingfish, tuna, wahoo, along with the “Weekend Warrior Division” that can weigh in snapper and grouper.

The weather held out for the event’s kick-off Friday evening with a Caribee Boat Sales Cocktail Party and captain’s meeting at Ziggie and Mad Dog’s. It was a very exciting turn out with celebrity some guests joining in on the action like Chad Henne, Matt Moore, Pat Devlin, Dick Anderson and Nat Moore.

On Saturday morning, with rain pouring down and the wind against them, the teams headed out for a day of fishing. It was anybody’s game, but the top boat honor went to first-time winners on the Fishin’ Pole. The team captured the $5,000 cash-and-trophy first-place boat prize by bringing in fish with a combined weight of 123 pounds. The team’s total winnings were $6,020. The second place boat award and $1,000 went to My-Sea-Cin with a total weight of 109.4 pounds. Contagious took home third place and in the new category for the Top Mariners Hospital Team, the trophy went to the boat Danica Anne.

Hank Cusaro aboard My-Sea-Cin took home the Top Angler title and trophy with 61.4 lbs pounds, doubling last year’s total. Heidi Sandrey aboard Danica Anne captured the Top Lady Trophy with her 15.7-pound dolphin. The tuna and wahoo must’ve been hiding from the storms, so it was down to who would take top dolphin and kingfish. Cynthia Orton aboard My-Sea-Cin brought in a 26.6-pound kingfish to seal the deal, and Rick Freeburg, CEO of Mariners hospital captured the top dolphin weighing in at 19.9 pounds. Rick donated his $500 winnings back to Mariners.

The tournament’s “Weekend Warrior” title for catching the top snapper and grouper was the main attraction at weigh-in this year. A 32-pound grouper stole the show caught by Dominick Zannelli aboard Fishin Pole. Dominick also won the top snapper trophy with his 10.3-pounder.