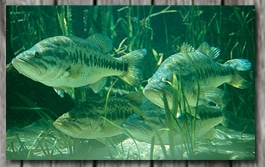 A fishing trip for Richard Scibek of Granbury, TX, and his friend James Quisenberry, resulted in an epic catch that neither of them will soon forget.

The two were fishing at Lake Fork on Saturday when Scibek, using a black salty—a type of goldfish—hooked a massive largemouth bass. After landing the fish, the pair discovered that the fish, weighing 16.04 pounds, was the exact same size as the twenty-second largest bass ever caught in Texas. 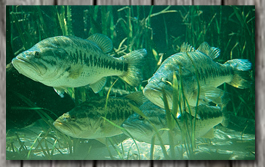 The 16.04-pound weight puts Scibek in the lead for Angler of the Year honors. The person catching the largest ShareLunker of the season receives a prize package from G. Loomis and, if the person is a Texas resident, a lifetime fishing license. The Toyota ShareLunker Program encourages anglers who have caught 13-pound-plus largemouth bass to lend or donate the fish to Texas Parks and Wildlife for spawning purposes.

Lake Fork has now produced 16 bass weighing 16 pounds or more, and holds 32 spots on the list of the 50 biggest bass ever caught in Texas. Because of a four-way tie for fiftieth place, there are actually 53 fish on the list.

Scibek was fishing in 54-degree water when the fish hit. “The fish never jumped,” he said. “When we got it in the boat, my fishing partner, James Quisenberry, thought it was a new lake record.” Quisenberry caught a 15.61-pounder from Lake Fork in 2010 that ties for number 37 on the Top 50 list.

The fish was held for pickup at The Minnow Bucket, an official Toyota ShareLunker Weigh and Holding Station. An electronic scan of the fish revealed no tag, so it was transported to the Texas Freshwater Fisheries Center in Athens to await the results of DNA testing to determine if it is pure Florida largemouth bass. Pure “Floridas” are held for spawning, while intergrades are returned to the lake as quickly as possible.

ShareLunker program manager Juan Martinez checked the fish periodically during the night, and Monday morning reported the fish appears to be doing well.

There was initial concern over the health of the fish because it suffered from barotrauma, an overinflated swim bladder, and was floating on top when Martinez arrived to pick it up. Previous attempts to “fizz” the fish by the anglers were unsuccessful, but Martinez was able to release air from the swim bladder, allowing the fish to maintain an upright submerged position.

Anyone legally catching a 13-pound or bigger largemouth bass from Texas waters, public or private, between October 1 and April 30 may submit the fish to the Toyota ShareLunker program by calling the ShareLunker hotline at (903) 681-0550 or paging (888) 784-0600 and leaving a phone number including area code. Fish will be picked up by TPWD personnel within 12 hours.

ShareLunker entries are used in a selective breeding program at the Texas Freshwater Fisheries Center (TFFC) in Athens. Some of the offspring from these fish are stocked back into the water body from which they were caught. Other ShareLunker offspring are stocked in public waters around the state in an attempt to increase the overall size and growth rate of largemouth bass in Texas.

Anglers entering fish into the Toyota ShareLunker program receive a free replica of their fish, a certificate and ShareLunker clothing and are recognized at a banquet at the Texas Freshwater Fisheries Center in Athens. All fish accepted into the program become official entries whether spawned or not, and anglers still receive all program prizes.