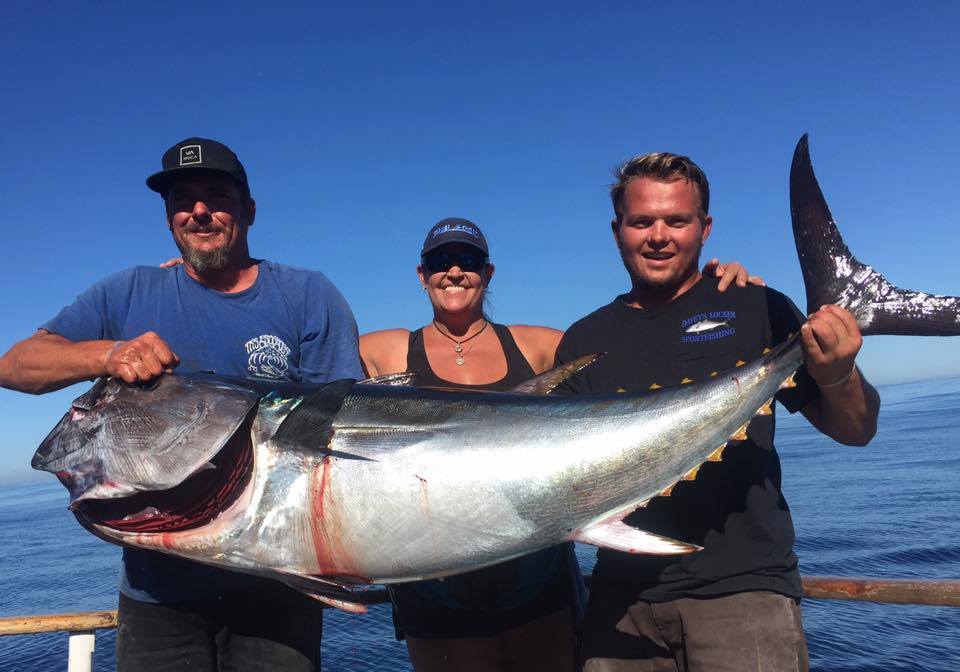 Editor’s Note: A little luck goes a long way in fishing and Joe Sarmiento is the first to remind us of that. Despite varying luck, the SoCal fishing report is still good.

I typically sign off my SoCal fishing report with, “Good luck if you get out there.”

No matter how good you are, it’s going to take some things going right to have a successful outing.  My experience this weekend is a good example… 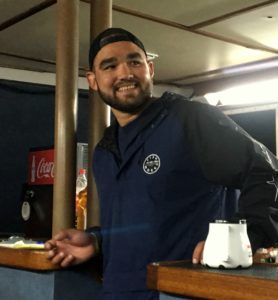 I stepped onto the Eclipse last Friday night for a 2-day trip.  Capt. Jeff Walker (right) was at the helm.  The fishing had been good earlier in the week.  If you recall, my article last Friday was pretty bullish on the opportunity for some late season bluefin.  It was bumpy on Thursday and Friday, but conditions were supposed to improve for the weekend fishing.  In his trip briefing, Jeff said the big bluefin bite had been primarily an afternoon thing.  Our plan was to fish yellows and smaller bluefin in the morning, then look outside in the afternoon to go big.  We picked up some really nice bait and set course for San Clemente Island.

The ride over was rough.  Despite the bumpiness, I managed to fall into a deep sleep.  Entering Dreamland, I found myself hanging on for dear life in an earthquake!  Plates and glasses fell off a kitchen table and a tv fell over from its stand.  I woke up with a start and went upstairs to go to the restroom.  The ship’s galley looked like my dream (minus the broken tv).  I returned to my bunk and fell back asleep.  When I woke up again, we were on the frontside of the island…bypassing Pyramid Cove.  Odd.

Jeff would later tell me the Navy kicked everyone out of the Cove.  We were limited to fishing above White Rock.  We tried a couple stops, but conditions were funky…wind against current.  Jeff metered some yellows, but we couldn’t get any to go.

Later in the day, we ventured outside to put the kite/yummy combo to work, but couldn’t find any fish.  To make matters worse, we were informed the whole island would be closed Sunday.

After talking to boats that went south, Jeff came down from the wheelhouse to share his findings.  The fleet pretty much struck out down south too.  Jeff was game to go long and give it a shot, but he cautioned we wouldn’t have much time once we got into the zone.

“Do you guys want to fish or go home and take a voucher for another trip?  Raise your hands if you want to fish.”

No one raised their hand.

So that was that, end of trip.  Got back early.  Despite high hopes going into the weekend, we ended up striking out.  I appreciate the work that Capt. Jeff and his crew put into it, but sometimes things just don’t work out.

In contrast, my buddy Sunny O’Neil (top) went out Monday night, fishing Tuesday on a 1.5-day trip aboard the Thunderbird.  It was an annual crew charter with crewmembers from several of the Channel Island Sportfishing boats.  Sunny is the galley goddess on the Gent (never a bad trip if Sunny is cooking!).

They fished yellows all morning with a steady pick (they ended up with 27 larger grade fish for 21 anglers).  Sunny was uncharacteristically struggling to get a bite when around 2 in the afternoon a big breezer of larger bluefin suddenly surfaced off their starboard side.

Jeff made an announcement over the loudspeaker there were some big hundred plus bluefin just outside on the starboard side and to get a bait in the water.  I grabbed the baby (her 50# setup – Cousins 859XH with Talica 16II) real quick and threw a bait right on top of it.  It got bit instantly.  One other person got bit on a jig I think, but it popped off and tangled my line!  All I remember them telling me was “Keep reeling!  Keep reeling!” while they untangled everything.

Sunny fought the fish with help from the crew over the next 2 hours.  When it was over and 3 gaffs put the beast on the boat, Sunny had her first bluefin and first fish over 100-pounds!  Congrats Sunshine!  It ended up being their only blue on the trip.

Same area.  Same fish.  Two captains named Jeff.  Different day.  Different angler.  Different outcome.  Fishing is never a guarantee.  If you want a guarantee, it’s wide open at your local fish market.  The opportunity is definitely there, but this time of year especially you’re going to need some luck to get your desired outcome.