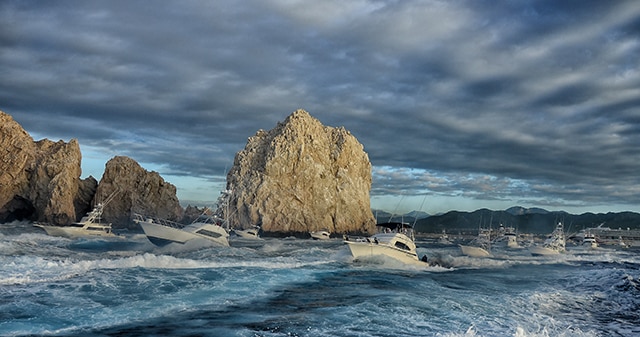 October is just around the corner which means only one thing in Los Cabos: “It’s TOURNAMENT TIME!”

Baja will welcome “back-to-back-to-back” events with a rich history in big fish/big money tournaments which began in the early 1980s, pre-dating the inner harbor that ultimately became the IGY Marina and so many more developments in Baja Sur.

The concept began on Balboa Island in Newport Beach, Calif.; Bob Bisbee and John “JD” Doughty operated Bisbee’s Sportfishing Center near the ferry landing, a shop that was equipped with one of the first land-based marine, single-side-band radios that established them as the central contact for the growing number of private yachts venturing down the Baja coast and beyond.

Originally, the tournament was basically an informal competition among local boats and crews … more or less a sales promotion for their fledgling operation. Rules were simple: the largest black or blue marlin caught won the $10,000 in prize money. Only a handful of adventurous boat owners signed up. 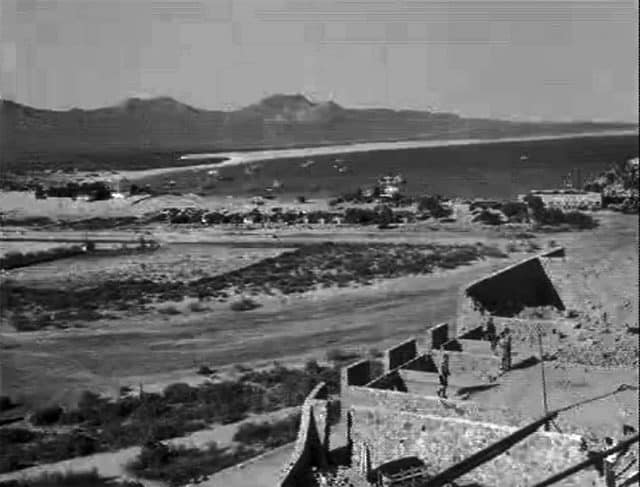 As the small armada began its journey from Southern California down the Baja peninsula, none imagined that this friendly, impromptu competition would be the foundation for a family business that would grow to host a fleet of boats the size of a third-world nation’s navy and would transform the world of big fish tournaments. Or that Bob Bisbee would be credited by many as one who contributed in the development of Cabo San Lucas, a sleepy little village at the tip of the Baja Peninsula, into a tourist Mecca of epic proportions.

In 2016, more than 2,000, top professional captains and crews, tournament staff and anglers – both professional and amateur – along with scores of spectators, gathered from the world’s four corners to the remarkable waters of Los Cabos where, arguably, some of the best big game sport fishing anywhere on the planet is found.

This year’s line-up includes: The 19th Annual Los Cabos Billfish (LCBT), the Los Cabos Offshore and the Black and Blue tournaments held in succession during October offering a staggering $4,735,900 in winnings. 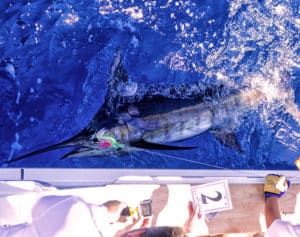 The three events share two fundamental components: huge fish and enormous sums of money (the amount determined by the number of entries in each event). But beyond that, each of the three has its own variations.

“Catch Stat” http://www.catchstat.com/CatchStat-Live-Scoring-Tournaments which is linked to each of the events, allows interested spectators to follow the minute-by-minute action online live.

Hookups are required to be reported in by radio or cell phone to “Tournament Control” and then they are instantly recorded.

Many of the activities are open to the public, allowing anyone a glimpse into the exciting world of tournament sportfishing. The fishing day always begins with a flare-gun start that can be observed from shore or from some of the local harbor cruise companies offering morning party cruises.

Each afternoon, the weigh-stations are open to the public. The LCBT has their weigh-station on the Malecón  near the entrance to the harbor where teams bring their catches for weighing and photographs. 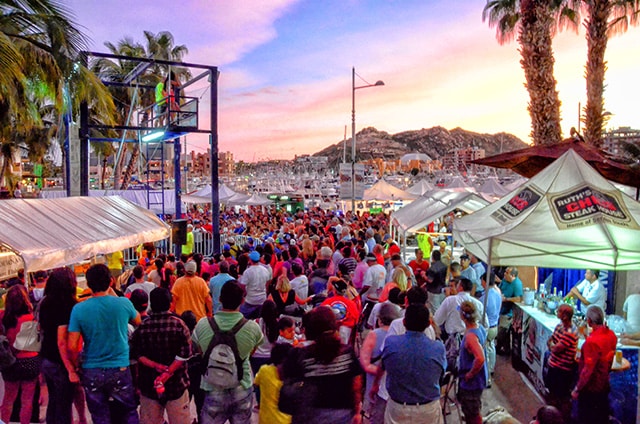 The Bisbees’ scale is centrally located at Puerto Paraiso Mall, surrounded by sponsors and other booths and creating a festival atmosphere open to the public. Lively music blares as staff members climb to the top of the scale and fling beads and trinkets to the outstretched arms of the shoulder-to-shoulder crowd.

The anglers’ excitement is infectious and the crowds can’t resist the fun which continues until the last fish is weighed or the scale officially closes.

Team size is limited to six anglers, which can include the captain and mate. Minimum weights of 300-pounds are consistent for both blue and black marlin in all three events. Striped marlin, sailfish and spearfish are all released with the exception of any striped marlin exceeding 175-pounds in LCBT only. Also in LCBT, gamefish include dorado, yellowfin tuna and wahoo with a minimum weight of 25-pounds and the entry fee across the board in all categories is $20,000. 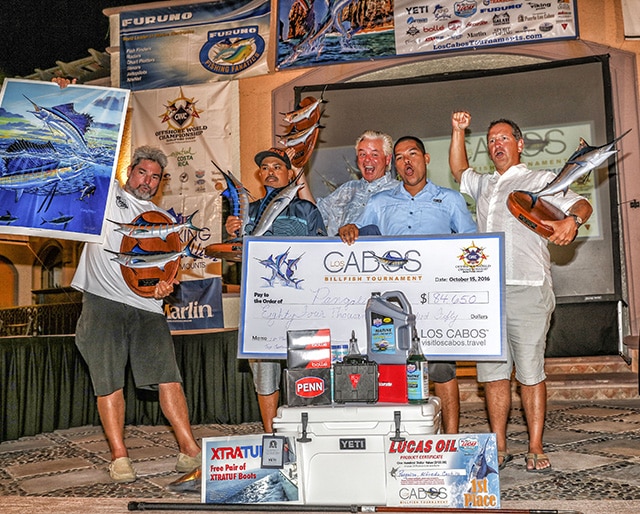 Last year, 37 teams with 204 anglers competed for a purse of $451,000. The Pangalisa team of Mike Hennessy, Gonzalo Castillo, John Domanic, Phillip Davis and Alfredo Castillo, earned $84,650 for their efforts along with an invitation to the Offshore World Championship. 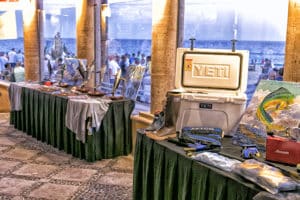 Bisbee Los Cabos Offshore Tournament, October 19-22, is up next. Originally a 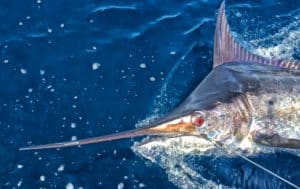 practice event allowing teams to tune up for the big show, the “Black and Blue” which follows a few days later, has evolved into a stand-alone competition attracting its own following. Last year, 108 boats with 778 serious anglers competed for more than $773,000 in prize money underscoring the popularity of this combo billfish/gamefish format.

Billfish minimum is the same as LCBT; however the gamefish included in this tournament are dorado (minimum 30-pounds) and yellowfin tuna (minimum 40-pounds). There is no limit to the number of registered team members. Lastly, the across-the-board entry fee for the Los Cabos Offshore is the least of the three – $12,500 for this two-day contest.

Registration is October 19 and daily weigh-ins are all at Puerto Paraiso Mall; spectators are always welcome.

Friday morning, the participating boats must be checked in and at the starting line at Land’s End before the 8 a.m. flare-gun start. Many spectators enjoy the black smoke and white water as the bright red flare streaks across the early morning skies and 100-plus boats come up to full throttle as they race to their favorite fishing hole, hoping to land a big one before the lines-out at 5 p.m;  then on Saturday morning, they do it all over again.

Open to tournament participants and their guests only, this year’s winners will be honored at a lavish Awards Celebration at Maria Corona on Sunday night. 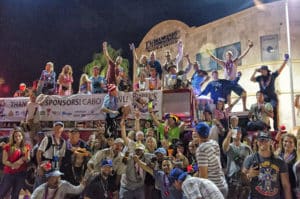 the Baja Cantina is closed to the public; however the parade from “Pub to Pub” is along the Main Street, beginning in front of the parking lot. A miniature Mardi Gras, the parade is a steady stream of fun and laughter as beads are thrown from the prized spots on the fire truck to the spectators.

The final event of the series is the 37th Annual Bisbee Black and Blue, October 24-28. This event primarily targets black and blue marlin weighing a minimum of 300-pounds to qualify. All others, including striped marlin, sailfish and spearfish are released with special prizes for the top release teams.

Over the years, thousands of anglers on many teams have competed in the Black and Blue produced by the Bisbee family. Winnings paid out to teams during the 36-year history have exceeded $75,000,000 and on 14 different occasions, the winning checks have been greater than $1,000,000, placing them in the “Bisbee Millionaire Club” status. 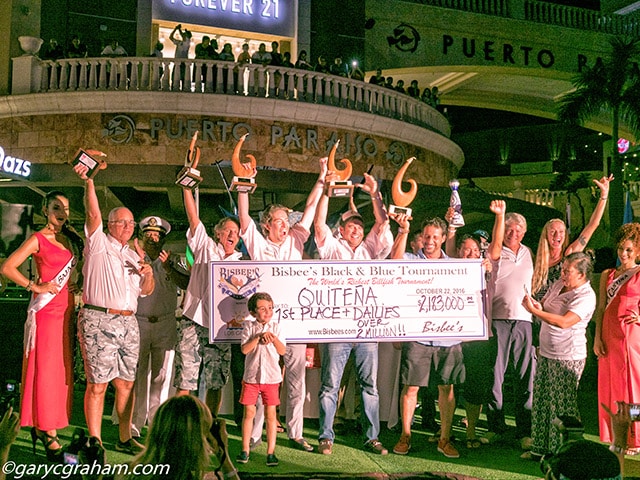 Registration is at Puerto Paraiso Mall on October 24 from 2 to 6 p.m., followed by the 7 to 9 p.m. Opening Ceremonies: Flag Honors with Mexican Naval Escort, Mexican National Anthem, Pre-Colombian New Fire Dance, Lighting of the Tournament Torch, Japanese Taiko Drums, fireworks and Music by Cabomax. The public is welcome.

Saturday night October 28, the Special Awards Celebration will begin at 6:30 p.m. at the Cruise Ship Pier. Starting with cocktails and a silent auction for the Bisbee Conservation Fund benefiting the Green Scholarship Program, Bisbee’s Offshore Tagging Projects and Feeding Los Cabos Kids, it’s followed by a special Baja Cantina dinner buffet and a big screen presentation of the tournament video.

While Wayne and Tricia Bisbee along with other family members manage Bisbee Tournaments, Bob Bisbee, along with his wife Aina, continue to be frequent visitors to Cabo San Lucas.

Their whim 36 years ago not only spawned a family business that has survived the test of time, it helped introduce the fledgling Cabo San Lucas to the growing world of sportfishing that has embraced the community and has allowed Bisbee Tournaments to become part of the rich sportfishing history foundation that the area enjoys.

It has also spawned hundreds – if not thousands – of sportfishing events throughout the Baja Sur area and beyond.

Bisbee’s history is all about high-stakes … excitem 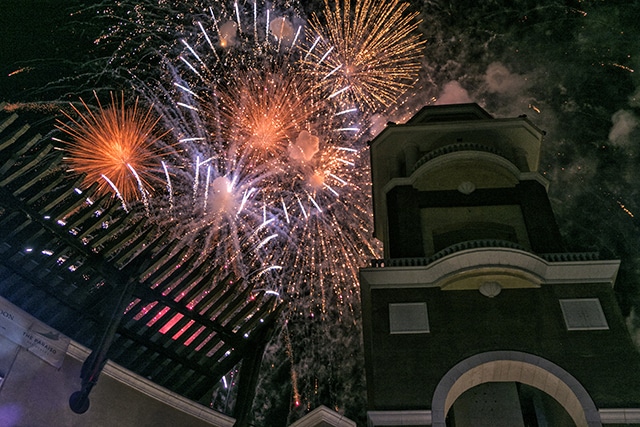 ent, drama, exultation or despair all unfold as the final qualifier is weighed and verified … all in plain view of participants and spectators collectively holding their breaths as they wait for results on the largest Sportfishing Stage anywhere in the world.

Will there be those surprising last minute twists and turns that alter the outcome this year? Will there be a last minute arrival that nudges the presumed leader off the board by a few or hundreds of pounds? 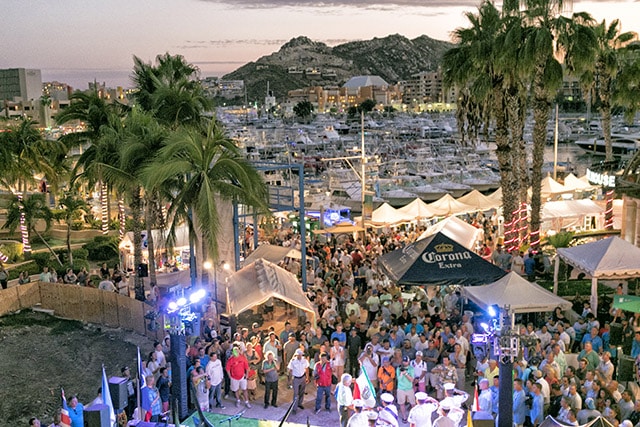 This year’s 14-day Cabo San Lucas Sportfishing version of World Series, Super Bowl and Triple Crown all rolled into one — where anglers are pitted against anglers as well as some of the largest fish in the ocean, and winners are rewarded with extraordinary cash prizes — will conclude on October 28 and once again there may be a new team name added to the roster of the exclusive “Bisbee Millionaire Club”.