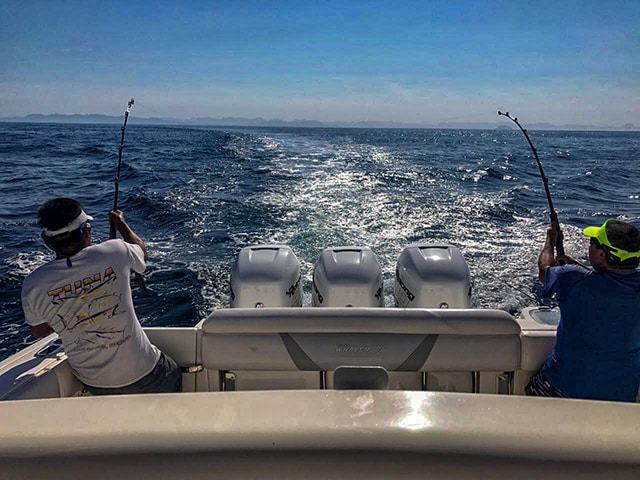 A recent report of sporadic yellowtail catches by Jay Yadon, owner of Outpost Charters in Loreto, didn’t raise any eyebrows but dorado might.

“The yellow bite has been very “off and on” lately. They bite one day and are gone the next. We’ve had the best luck at Catalan. The South end has been holding yellowtail and grouper and the dogtooth snapper bite has been consistent on the North side of Catalan, if you are able to get the fish out of the rocks. We have been slow-trolling live mackerel on the surface and been getting the big snappers to come up, though the hard part is getting them up before they cut you off in the rocks! The water is only 34- to 50-feet deep so you have your work cut out for you…”

Almost a postscript, he added that an early season dorado(Loreto dorado) had been landed. Although not huge, the 12-pounder was a positive sign. He continued that hopes were high based on current information, on the amount of sardina, and the “sargasso” in the water. He added 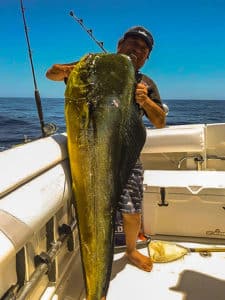 that the sea temps around Catalan had climbed to 78- and 79-degrees.

Monday evening, a photo of a huge dorado arrived in messenger with a cryptic message:

“Caught today. One of three dorado with the largest weighing 55-pounds.”

He added that they also caught 2 striped marlin, 3 cabrilla and 1 yellowtail plus they spotted a swordfish that sunk out before they could bait it. 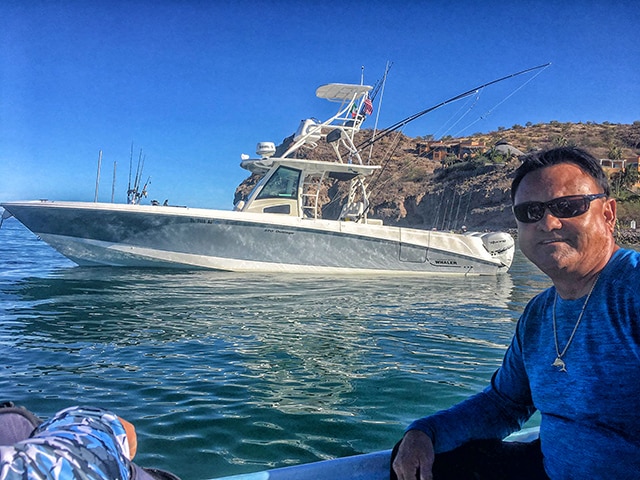 All three dorado were caught aboard Robert Ross’s 37-foot Boston Whaler Rampage (Yadon’s father-in-law). When they landed several record-size yellowfin tuna back in January, they had created quite a stir.

Ross and his deckhand, Samurai, were fishing outside Catalina Island in the trench where they were seeing many patches of sargasso, in flat, calm 81-degree water that has been a productive area in the past for Ross.

Will these larger dorado work their way inshore or remain where they are? That is the $64,000 dollar question that can only be answered in time.