When asked where the majority of sport fishing occurs in Baja Sur, most knowledgeable anglers will automatically declare the major tourist centers (Los Cabos, La Paz and Loreto) in terms of sportfishing offered would be correct. 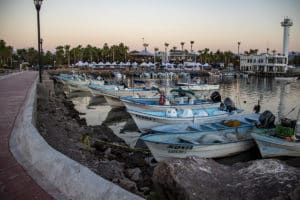 These community events involve most of the local and state government officials. Resident anglers and their families, as well as visiting anglers from anywhere on the planet who have qualified, are encouraged to fish in these government-sponsored events that are more like fiestas than tournaments.

The winners of these individual events, in addition to trophies and cash prizes, receive an invitation to participate in the Copa Campeones Calisureños GRAN FINAL held each August at the picturesque town of Loreto, founded in 1697 by Jesuit missionaries.

During the past four years, these popular tournaments have established themselves as a “not to be missed” family series in Baja – not only drawing residents of communities in the area, but also attracting a growing number of anglers from mainland Mexico and the United States, setting new attendance records each year – growing exponentially. In 2019, 148 teams comprised of 550 anglers participated in the Gran Final with 37 in the new Kayak Division. 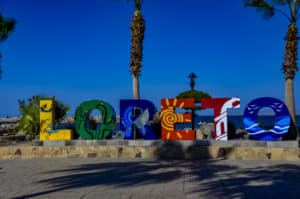 Arely Arce Peralta, Loreto’s municipal president, declared, “The Calisureños Champions Cup is already an integral part of the Loretana tradition. In addition to generating a substantial economic impact on the municipality, reaching nearly 100% occupancy for local hotels during the event, as well as the restaurants and other tourism service providers, it strengthens the local economy, providing an estimated impact exceeding 10 million pesos!”

Early in the week preceding the weekend festivities, teams began arriving. Some came by water in their tricked-out sport fishers. Others rolled into town with trailers behind them; still, other participants preferred to depend on the local knowledge of local charter captains and mates aboard pangas and some cruisers.

The numerous islands dotting the fertile waters of the Sea of Cortez surrounding Loreto can be daunting, demanding exploration by visiting teams not familiar with the area surveying their chances and pre-fishing for the upcoming contest.

All week, more fishermen and their families arrived joining in the group in the “seeking intel” game … both on the water pre-fishing, and interacting with others also competing in the event as they appeared. 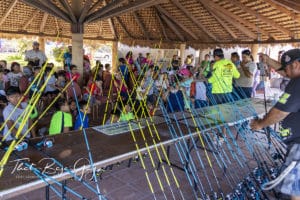 By Fri. afternoon, the town was full, and there were very few if any, rooms available. By Fri. evening, visiting and local children registered for the first-ever Kids’ Tournament on Sat. morning.

The first Shore Fishing Children’s Tournament on the jetty of the Loreto Marina took place because of the enthusiasm generated by the Children’s Clinics held in the five municipalities of Baja Sur, BCS. These clinics were a result of the efforts of IGFA, SAC, and Stars & Stripes Charity Tournament, which sponsored the Clinics that were conducted by Gonzalo Alamea, introducing the children to the technical aspects of sportfishing. More than 500 youth had participated in the Clinics in 2019.

Also, on Sat., the 34th and final qualifying event, El Torneo de Pesca Tiro Caza y Pesca 2019, was being held by a hunting and sportfishing club from Ciudad Constitución. Competition registration for the event was held at the Desert Inn located on the beach north of town. 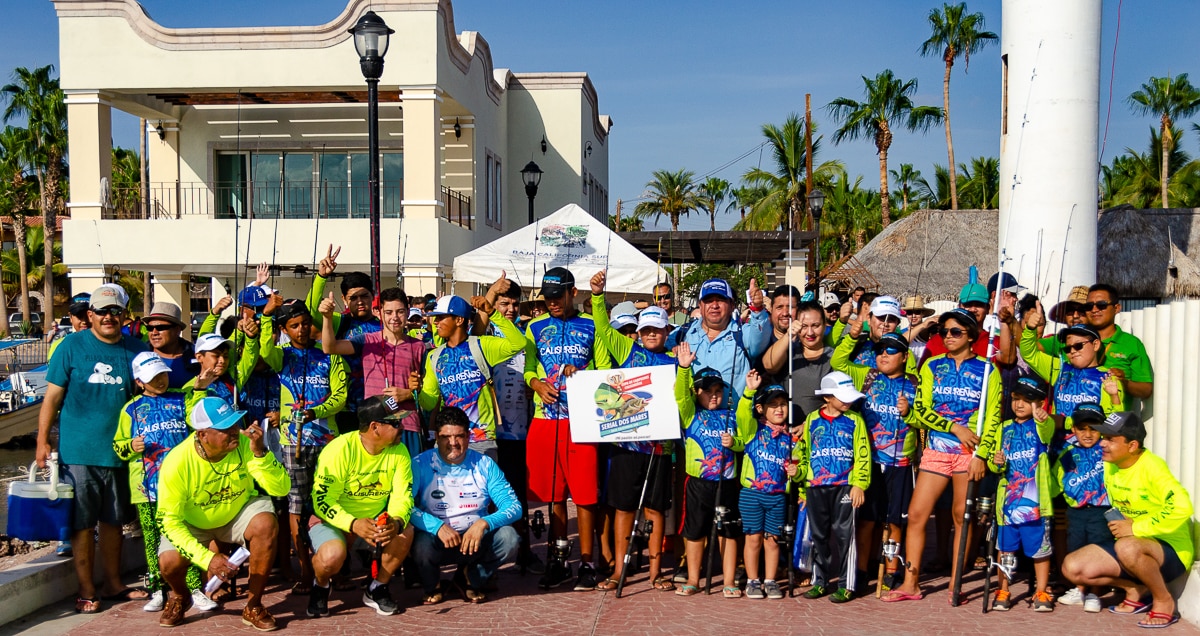 Sat. morning, 165 kids, along with their families, arrived at the entrance to the jetty surrounding the Loreto Marina with fishing rods in hand, gathering briefly for a photo op before the obligatory flare gun start which sent the participants hustling for their favorite spot on the rocky jetty.

Throughout the morning, kids clutching their rod in one hand and caught-fish in the other hightailed it for the weigh scale. After weighing their catch, there were more photo ops before they headed down on the dock to release their fish.

Another new twist was a “Sashimi Contest,” complete with Sushi Chefs from around the state preparing their specialties to be judged and sampled by spectators. This contest attracted a large crowd as teams began to arrive at registration which opened simultaneously.

An army of volunteers greeted the teams in “easy-to-spot” bright yellow shirts with STAFF emblazoned on the back. The entire registration layout was much improved. Throughout the afternoon, teams were able to complete the process in record time. 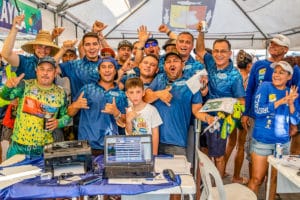 The line grew as anglers waited to register. Spectators watched as teams with their matching shirts and hats added bluster and panache, strutting their stuff and mingling with other competitors while making new friendships and renewing old. All the while, they were enjoying the comradeship that has become a fundamental feature of sportfishing tournaments worldwide as they contemplated their best strategy on what to target – dorado or billfish (blue, black and striped marlin that must weigh a minimum of 100-pounds).

Unfortunately, many chose to wait until early evening to complete their registration, overwhelming the staff and their streamlined system. However, the staff is already reviewing ways to expedite the registration. 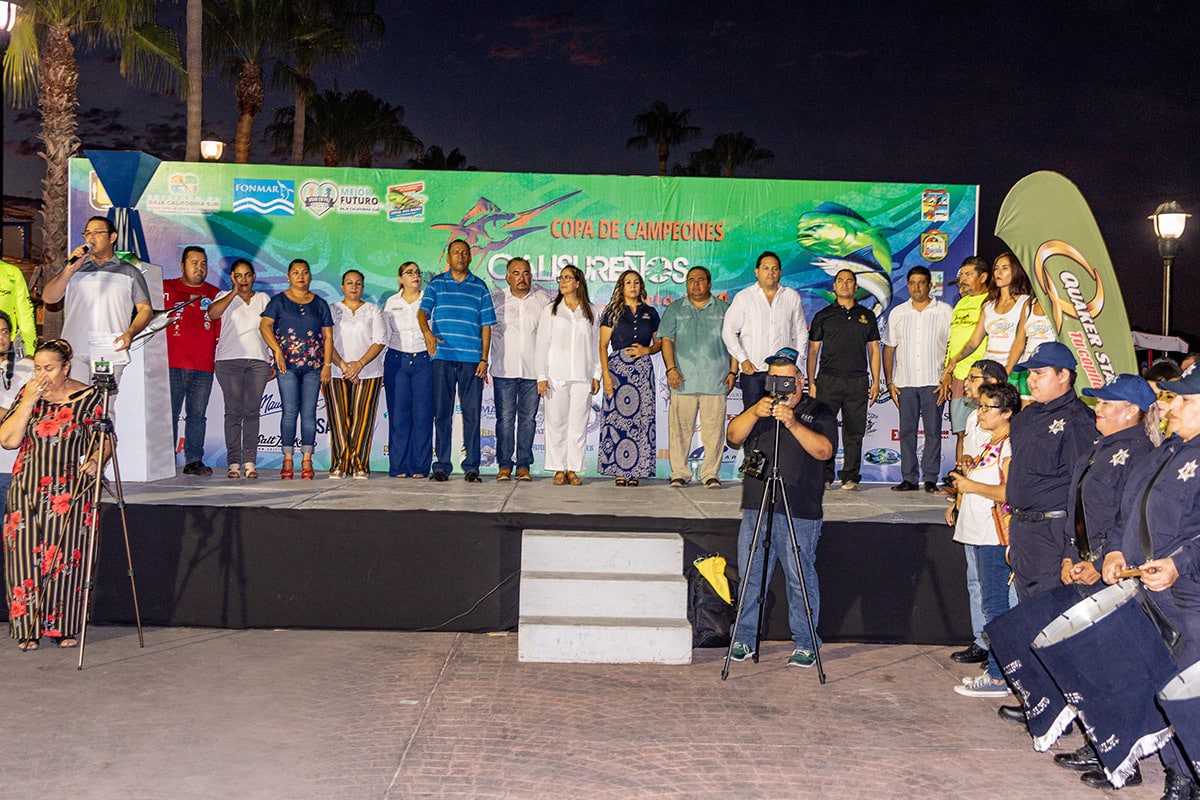 The presentation of the Mexican flag and the singing of the national anthem preceded the Captain’s meeting as it began with introductions of the stage full of dignitaries, local politicians, and staff.

The winners from the Kids Tournament held earlier in the day were announced and presented their prizes and awards: 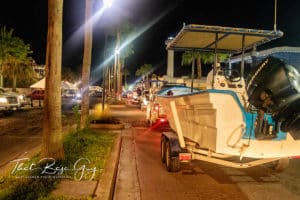 Sun. morning, the Loreto Malecon was filled with trucks 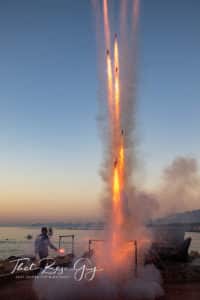 with boats in tow, waiting their turn at the launch ramp long before the scheduled start. The rock jetty was equally busy as families of the teams joined locals to watch the festivities. Dignitaries, politicians, staff and television, radio and media representatives crowded near the bronze sea lion statue dominating the end of the jetty as the team boats milled about, crowding the imaginary start line.

The rocket man reviewed his ballistic array for a final time as the staff checked and double-checked to be sure the flare gun was loaded and ready. Then came the countdown, followed by the POP of the flare gun fired by Baja Sur Governor Carlos Mendoza Davis. The throaty roar of 148 boats with 550 anglers at full throttle didn’t drown out the thundering roar of the ten rockets fired sequentially by Rocket Man as the crowd on the jetty cheered their approval. 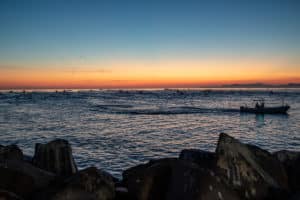 As the first wave of boats disappeared over the horizon, the 37 competitors in the Kayak Division were ready. Once again, the roar of gun and rockets startled the sea birds fluttering about as the stealthy small paddle, and peddle-driven boats meandered for their spot along the shoreline. 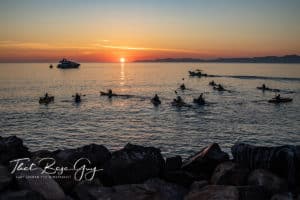 With ideal weather, the flotilla of kayaks was able to explore the shoreline in both directions from town. Throughout the morning they found a mixed bag of small rockfish and cabrilla along with triggerfish, barrilete and pufferfish. There were reports of a few dorado and yellowtail hooked and in one case landed. However, because of an equipment failure, angler and dorado both arrived a few minutes after the scale closed for the Kayak Division.

From 2 to 4 p.m., the fleet returned to the harbor with a dorado and a few billfish that met the 100-pound minimum. The larger dorado found earlier in the week by teams pre-fishing seemed to disappear. Perhaps they took Sun. off to attend church. 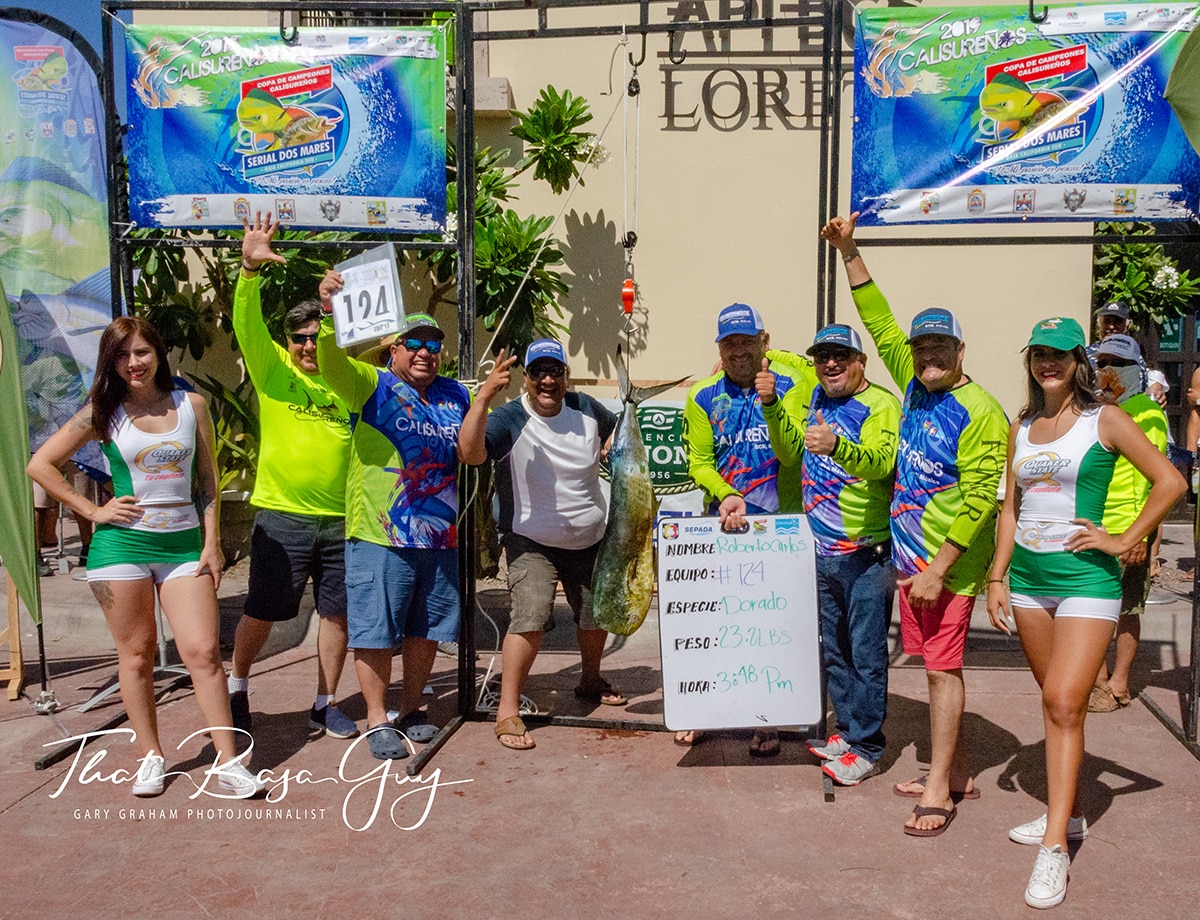 Regardless, there were a few meeting or exceeding the minimum 12-pound weight that made it to the scale. When the scales finally closed at 4, there were still a dozen teams waiting for their turn. The suspense continued until the final fish was weighed at nearly 5.

The Awards Banquet held Sun. evening on the Malecon featured an extraordinary stage with an impressive backdrop; entertainment during dinner and after the actual awards were provided by “California Brass” and Chucho Montaño.
Dinner was a remarkable opportunity to sample specialties of local chefs from hotels and restaurants in the community.
A presentation of awards followed dinner, along with the raffling of a Toyota Truck plus exciting fireworks that lit up the Baja sky high above the Loreto marina. 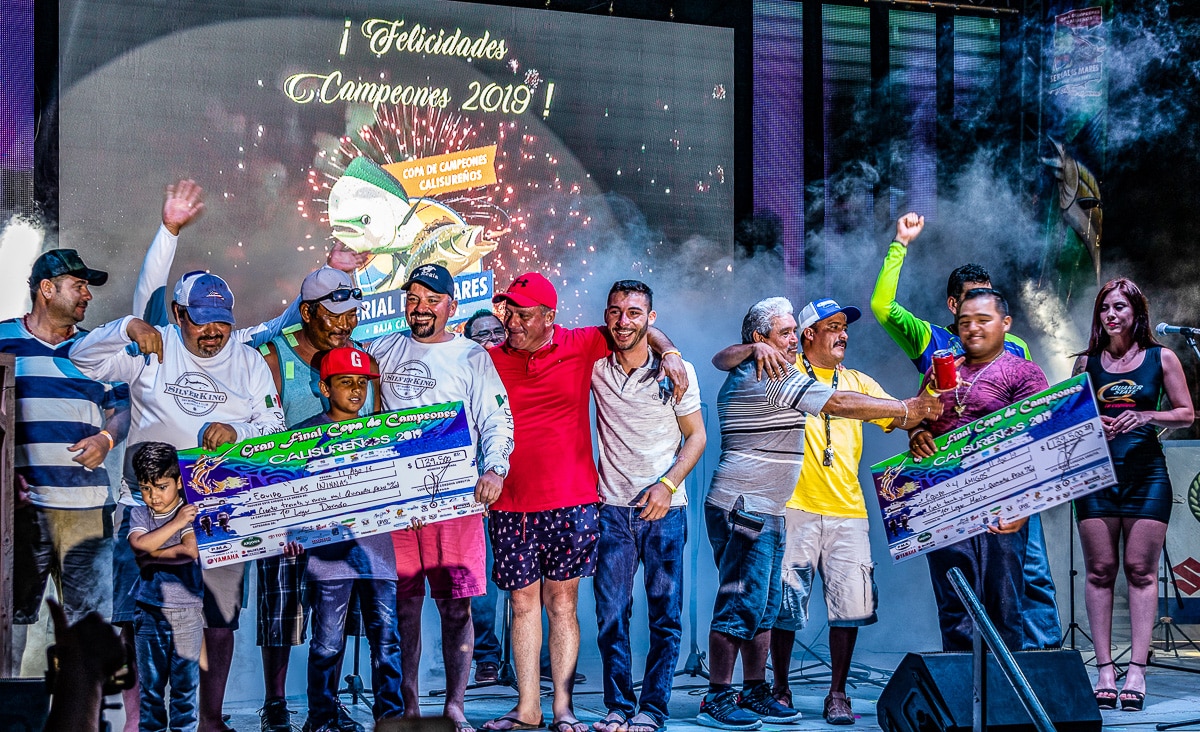 Luis Francisco Cota Ulloa, a member of the Coca Cola team, was also the winner of the Toyota Hilux 2019 raffle.

First Kayak Fishing Tournament with a participation of 37 teams resulting winners were:

These community events are more than tournaments. Anglers are delighted to bring their families with them and to have their children enthusiastically learn about fishing as they interact with others their age who are also competing. The Baja Sur Government departments of SEPADA and FONMAR have just planted the seed for the successful future of Baja Sur’s Sportfishing.