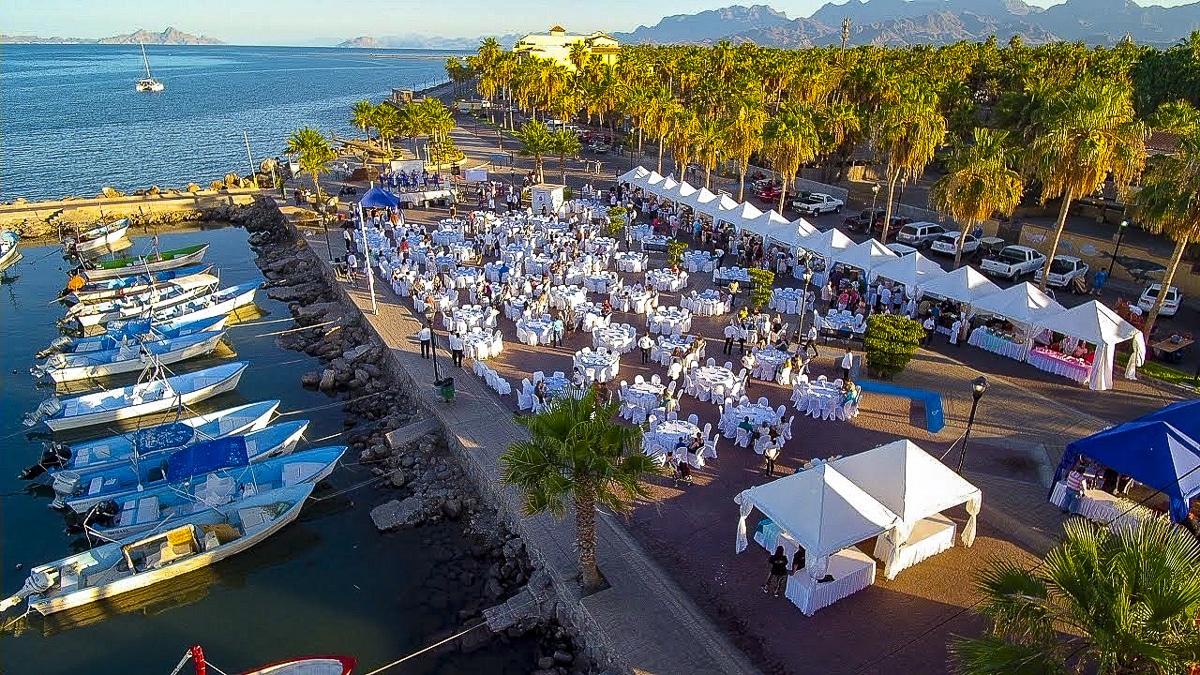 Thankfully, chocolate clams – almeja chocolata – delicious as they are, aren’t chocolate flavor. But the shells do look more like a children’s Halloween treat than the gray color we normally expect. 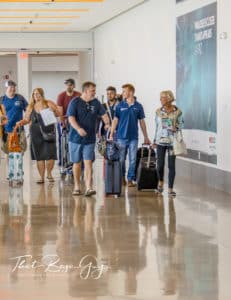 Like many others traveling to Baja from San Diego, our trip began at the CBX Cross Border Express – the exclusive pedestrian bridge that allows passengers to cross between the Tijuana International Airport in Mexico and San Diego. The 390-foot long bridge – the first building to connect the U.S. to a foreign airport terminal – serves hordes of passengers who cross the border as part of their trip, helping them avoid delays at the congested San Ysidro and Otay Mesa border crossings.

After a walk slightly longer than a football field, we were at the Calafia ticket counter, where our bags were quickly checked and we were directed to  boarding gate. 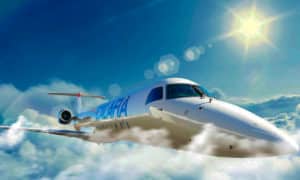 touchdown. Customs was a snap, and our friend, FONMAR’s Tournament Coordinator Gonzalo Alamea Camacho was there to greet us and take us to our home-away-from-home, the lavish La Misión Hotel on the Malecon, a few blocks from the marina.

During the 20-minute drive, Gonzalo brought us up to speed on the 4th Annual Grand Gastronomic Fishing Tournament (Cuarto Gran Torneo de Pesca Gastronomico) slated for June 1 in conjunction with the Gastronomico de Almeja Chocolata.

Before the Gran Tournament as part of the festivities, Gonzalo had organized a kids’ event, kicking off the International Game Fish Association’s Passport to sportfishing program in Baja. As a pledge for their 80th Anniversary, IGFA pledged to teach 100,000 kids around the world the basics of sportfishing.

Eager to capture the kids in action, immediately after checking in, I grabbed my Canon and rushed to the kids’ clinic, already underway on the beach near the Loreto Marina.

The palapa-covered area was crowded with 85 kids plus many of their parents where Gonzalo and ten local sportfishing captains shared their local fishing knowledge at individual stations. Instructors covered topics from knot-tying and releasing fish back into the water, to conservation of the resource. The young people moved from booth to booth as proud parents snapped pictures with cell phones. Not only were they enjoying the one-on-one instructions, they were ensured of actual fishing the following day, as well as into the future. IGFA supplied a rod for each young person who fished to use. 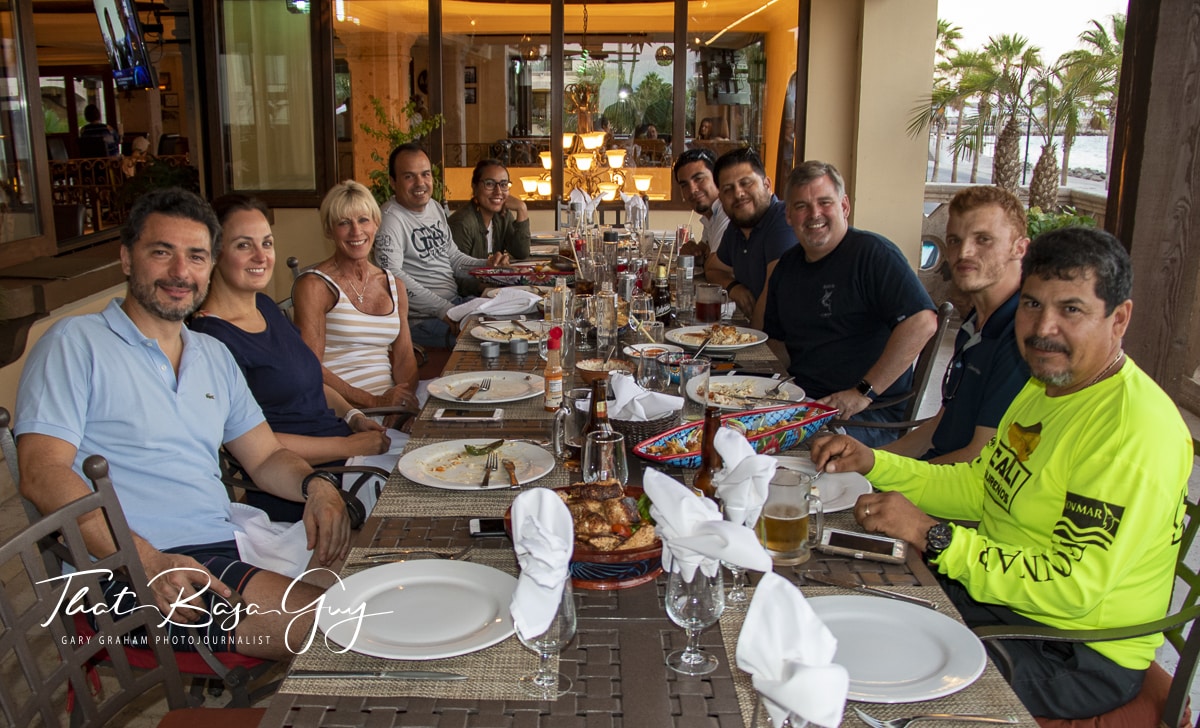 Later, our team was treated to a feast of locally caught, fresh fish prepared in at least five different ways prepared by La Misión’s Chef.

The evening concluded with our group reviewing the itinerary arranged by our hosts for the weekend beginning with a fishing trip on Friday morning when we would all meet in the lobby at 6:30. 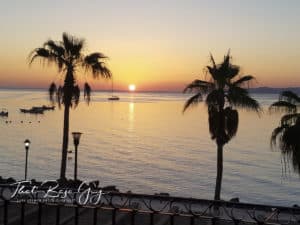 The rays of the sun glistened on the slick Sea of Cortez as we headed for Marina Puerto Escondido the following morning.

The ride south on Mex 1 was a half-hour and our two boats’ live wells, provided by the marina, were being topped off with live mackerel as the team boarded the boats – a 37-foot Whaler belonging to one of the partners at Marina Puerto Escondido and a center console skiff also from MPE. The ride out at about 40-mph was exhilarating, as was the several football field-sized school of porpoise that raced to greet us along the way. 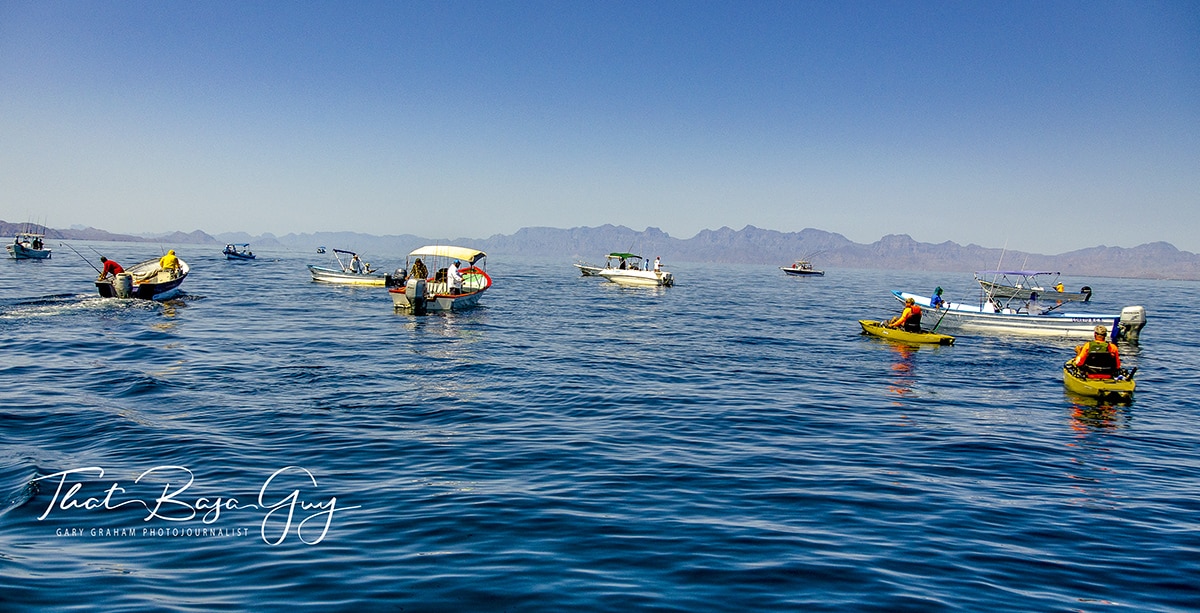 The hot-spot wasn’t hard to find with a fleet of about 25 boats from kayaks to 40-footers camped out on a 200-foot high spot. Many already had bent rods as anglers struggled to land their yellowtail. 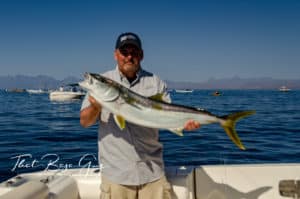 Enrique Salcedo, MPE Manager, maneuvered the boat until he located the correct depth. Both boats had success in the same area.

Then, on the run down the weather side of Isla Carmen, 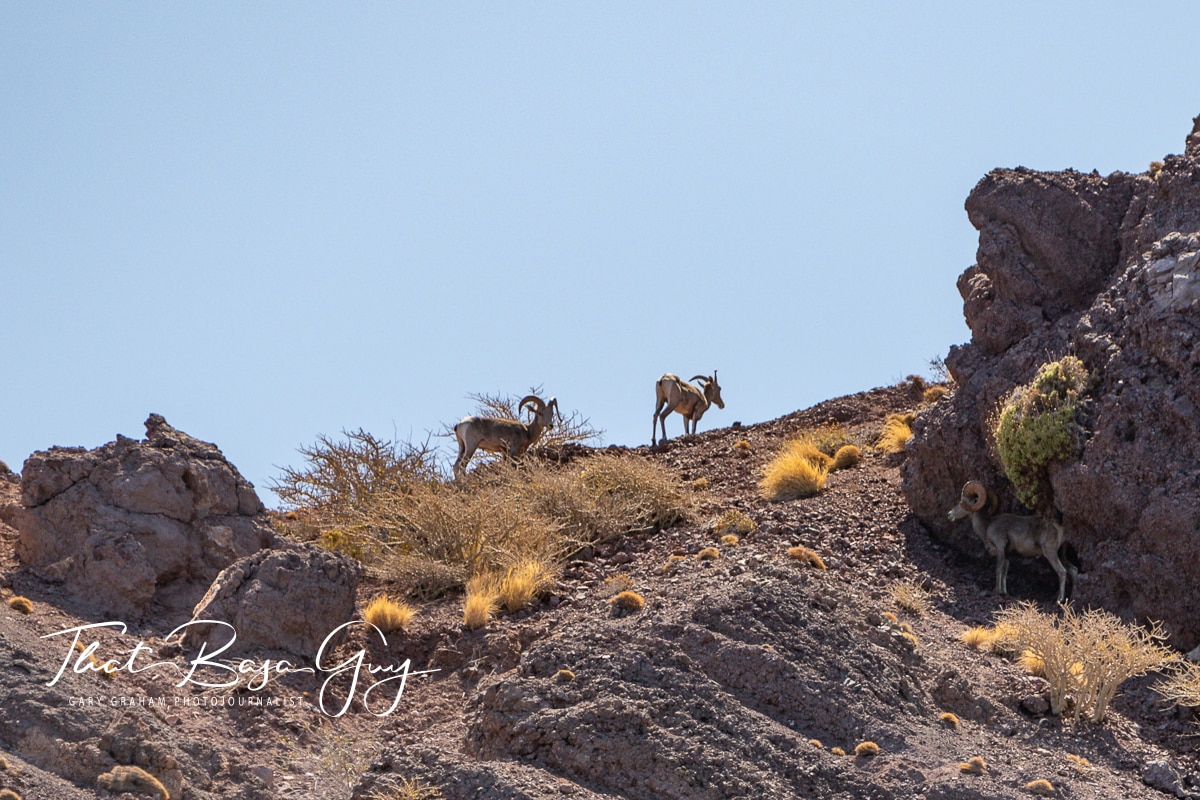 Dallas Shackleton spotted a small group of bighorn sheep traversing a narrow path on one of the peaks.

The run was followed by a refreshing swim for most in the azure-colored water of a pristine, secluded cove before returning to one of the Hamman’s homes back at MPE, where the catch from the morning was served, prepared in different ways including ceviche and sashimi.

“What a extraordinary experience. Visiting Loreto you are truly immersed into old Baja. Whether you’re walking  the Malecón along cobble stone streets, touring the Mission built in 1687 or diving into 78° glacial blue waters whilst catching glimpses of dolphins and big horn sheep. Loreto is a town of generosity, culture, and immense pride that can be felt with every handshake or hug,” Shackleton commented during the return to the hotel.

Back in Loreto, the Kids’ Fishing Tournament was a huge success with 131 children participating fishing from the rock jetty surrounding the marina in town. 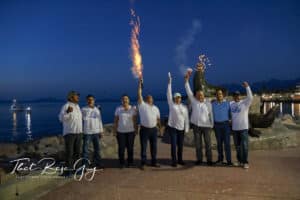 Later that evening, registration was held for the teams competing in the 4th Annual Grand Gastronomic Fishing Tournament to be held the next day. The evening ended with the awards presented to the winners of the kids’ event.

Saturday morning, the waterfront was abuzz with activity as the 43 registered teams prepared for the 6:30 flare gun start from the end of the Loreto Marina. 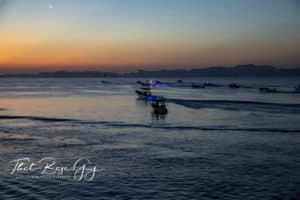 Boats jockeyed for position as the local and visiting dignitaries lined up for the countdown. Five, four, three, two, one … and three separate flares flew into the air signaling the start of the one-day event. The scales would open at noon and close at 3 p.m. All teams with fish to weigh had to be at the scale by that time.

The winners would be announced and awards presented later in the evening at the huge Seventh Festival Gastronomico de Almeja Chocolata dinner. 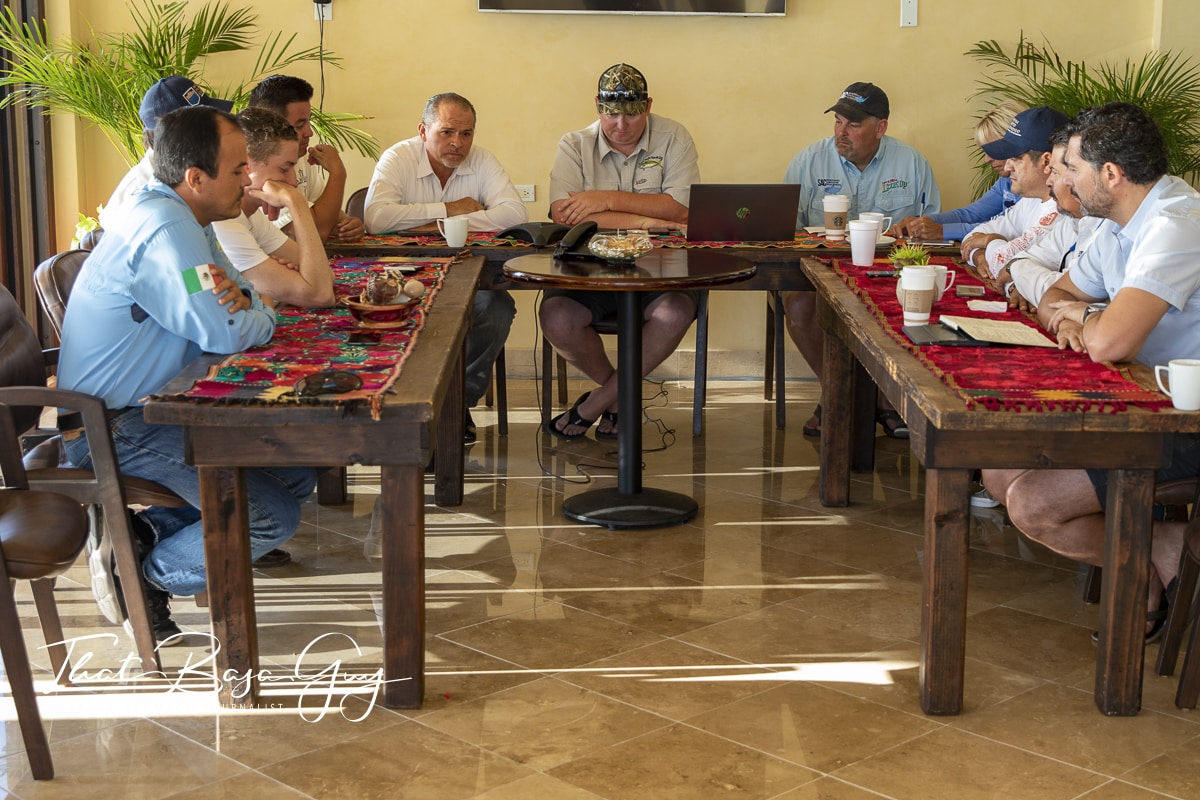 The remote broadcast of the “Let’s Talk Hookup Show” was next on the Saturday morning agenda. Broadcast from the 4th-floor conference room at the La Misión Hotel overlooking the Sea of Cortez, “Rockcod” Rick Maxa opened the show with Pete Gray and Captain Ken Franke in the Southern California studio. 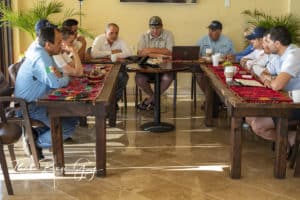 the Secretariat of Tourism in BCS, who expressed both his personal and the government’s appreciation to the SAC team and those they represented for assisting in spreading the word about the wonderful attractions and services that the area offers. 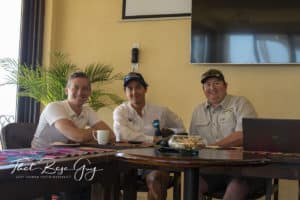 Enrique Salcedo and Stenson Hamman, marketing manager for Marina Puerto Escondido, described the marina and development they represented and the many services that they offered at the marina: dry storage, slips for boats up to 200-foot mega yachts, fuel facility, store and restaurant and much, much more. Stenson added that they also offered charter sportfishing which included a few larger boats for fishing offshore.

Allan Cesena explained how he and the La Misión Hotel could provide access to a wide range of tourist activities available in the area for visitors and guests.

Team members added their observations about all they had seen and experienced during their stay. 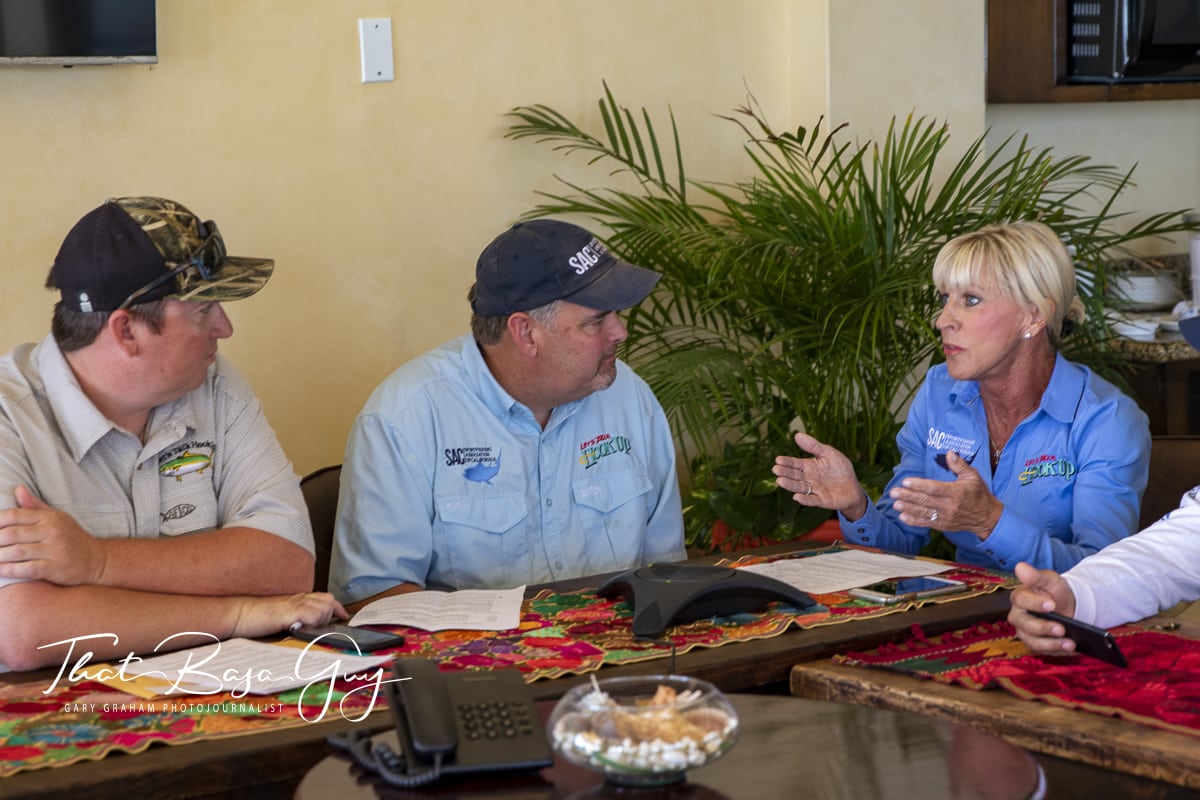 Cloward volunteered that the Loreto area was a diamond in the rough offering a dazzling array of activities plus extraordinary weather. She concluded, “Me and my ‘Gal Pals” are going to make Loreto our ‘skip the gray’ spot from now on.”

“Loreto delivered one of my best days ever on the water – fantastic yellowtail fishing in the morning, swimming off a hidden cove topped off with our fresh-catch lunch in the shadows of a pristine Sierra de la Giganta mountain peak,” Dan Malcolm, San Diego Port Commissioner, observed.

Closing the broadcast hour that seemed to have flown by, Captain Franke encouraged anglers and visitors to come see for themselves the recent resurgence of Loreto, the town that its residents believe is the heart of one the best regions in Baja.

“Old School Baja does still exist. Great fishing, friendly people, amazing food and modern amenities, and it’s only a 1-hour, 15-minute flight below the border. My next trip to Loreto can’t come soon enough,” Maxa grinned. Signing off, he advised, “If you don’t go, you won’t know.”

The following link is the complete broadcast.
https://youtu.be/jnzz_ywEVoU 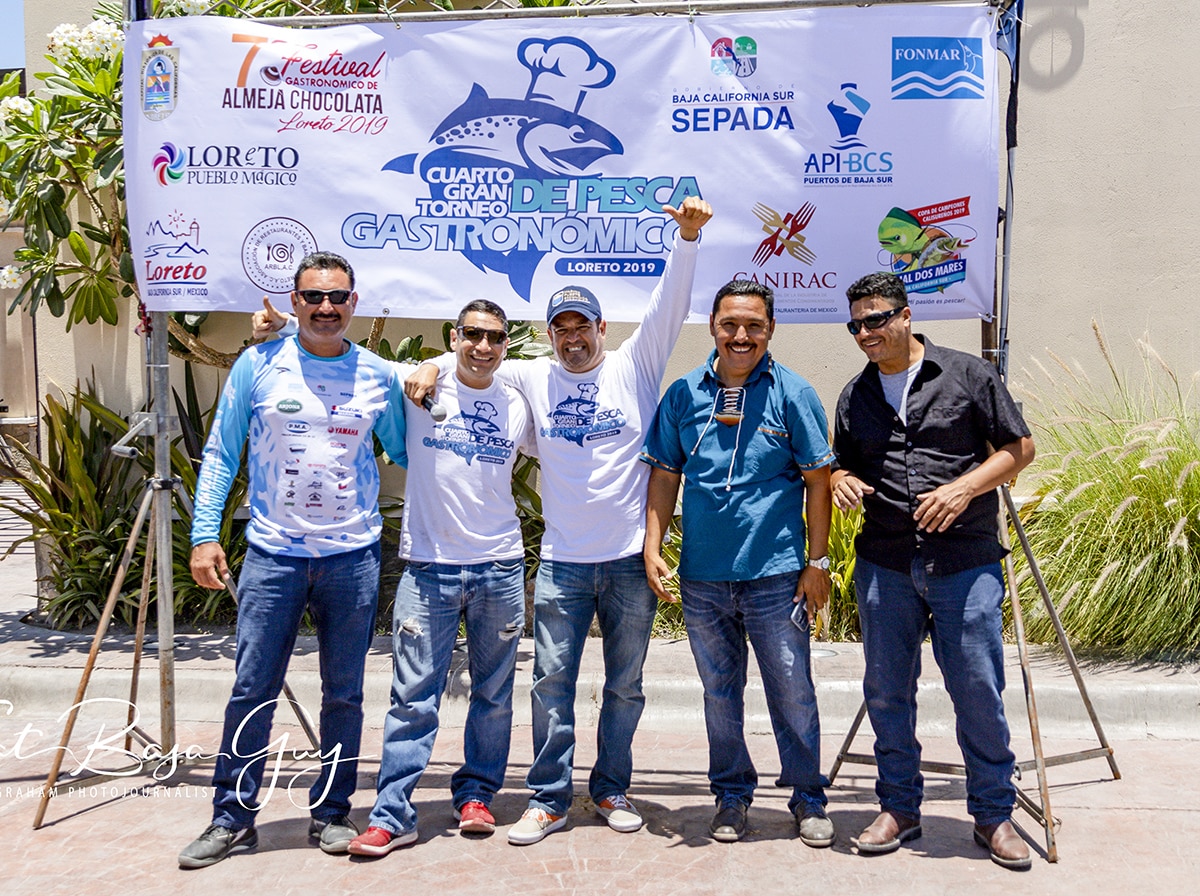 Weigh station crew members scrambled in preparation to have everything ready by high noon when they were scheduled to open. Soon after, the parade of teams began to arrive with yellowtail, grouper, and cabrilla. By 3:00, the line of teams waiting to weigh their catches had grown.

By the time the last fish was weighed and recorded, 31 of the 43 teams had weighed-in qualifying fish. That is pretty good fishing by anyone’s standards! The final team awards were distributed at the Seventh Festival Gastronomico de Almeja Chocolata that evening.

Throughout the afternoon, 20+ stalls lined the dining area in front of the raised stage with the Sea of Cortez for a backdrop. Each stall served several specialties from different restaurants, cafes, and hotels, each offering an extraordinary menu ranging from hors d’ oeuvres to desserts and everything in between. Each attendee had purchased tickets allowing them to choose food items at any of the stands including a few of the many taco stands scattered throughout the area. Items included soups, salads, seafood, entrees, and the centerpiece of the event, almejas chocolatas prepared with a traditional recipe handed down from generation to generation.

Long before sundown and the opening of the stalls, local and visiting dignitaries gathered for the formal ribbon cutting. The walkways in front of the festively decorated stalls were filled with guests busily “oohing and aahing” over the myriad of specialty food items offered at each stand while the press was busy with TV cameras filming dignitaries as they stopped at each table to admire the taste-tempting variety of culinary treats from the many restaurants. 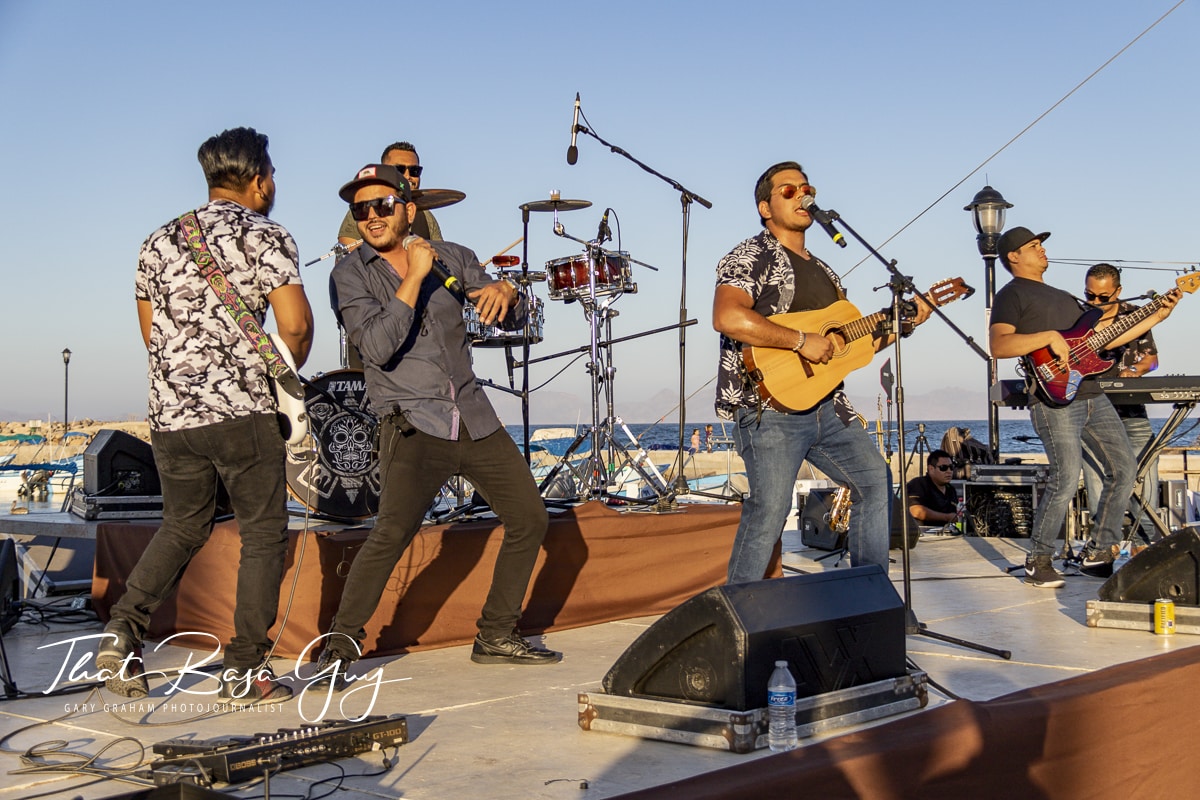 The “Salsa Brava Band,” a Latin music ensemble featuring salsa, timba, Latin jazz, bolero, cumbia, and bachata took the stage and soon had the diners rocking (or at least tapping their feet) to the beat. 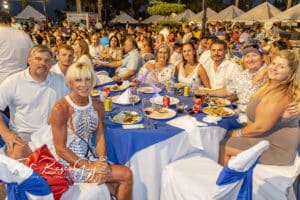 turned to dark, the approximately 800 guests felt like they were wrapped in a festive cloak. Their senses were bombarded with captivating music that enticed some to the makeshift dance floor in front of the stage where smoke machines huffed and puffed, spewing a colored cloud that hid the energetic dancing couples. 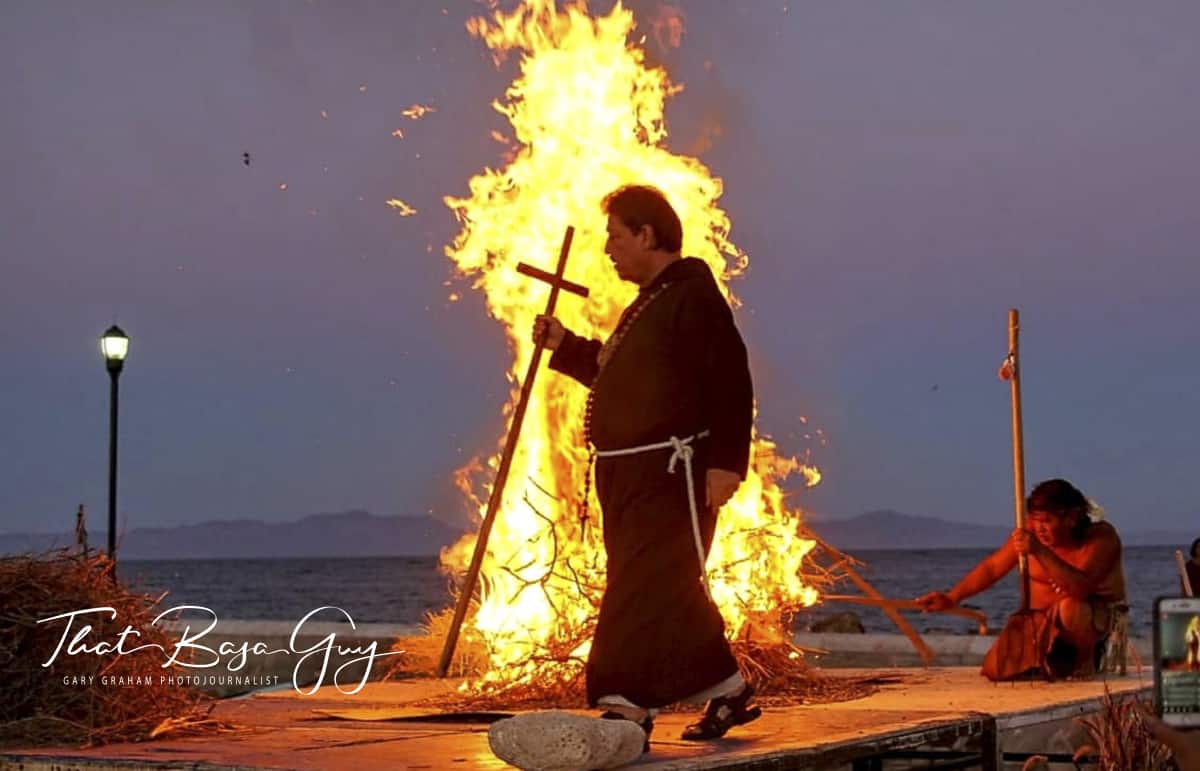 On a smaller stage, a priest clutching a cross kept a watchful eye on the bonfire and the “nearly nude cook” building and then tending the brush fire used to sizzle the prized Almejas Chocolatas. When cooked to perfection, guests sampled the clams prepared many ways – gratinated, pickled, stuffed, as well as in clams tatemadas.

After dinner, the award winners for the top three fishing teams of the tournament were presented checks.

The emcee also took that opportunity to recognize many of those in the community and beyond who had contributed to the success of the weekend event on its seventh anniversary.

Then, to the delight of the audience, the “Salsa Brava Band” returned for an extended encore that had many dancing in the aisles and winding through the tables. 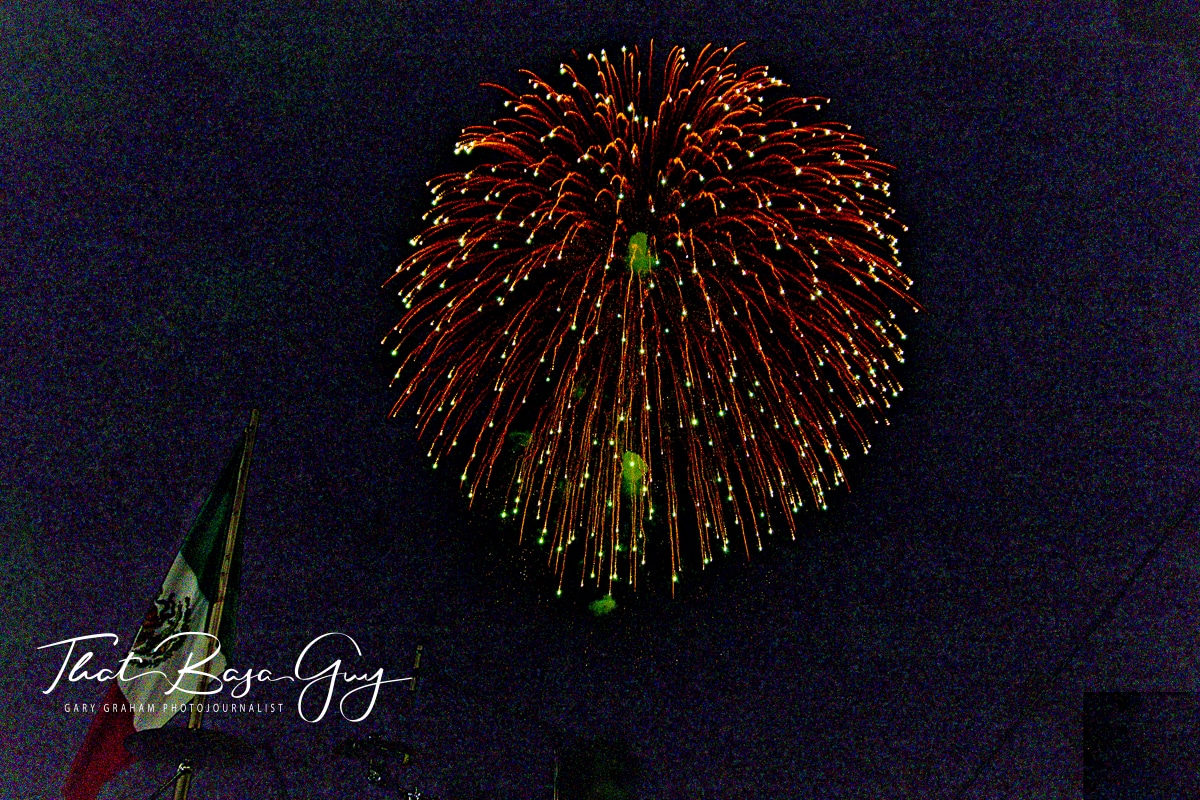 And like icing on a cake, the fireworks lighting up the Marina was the perfect finish to the exciting, extraordinary weekend.