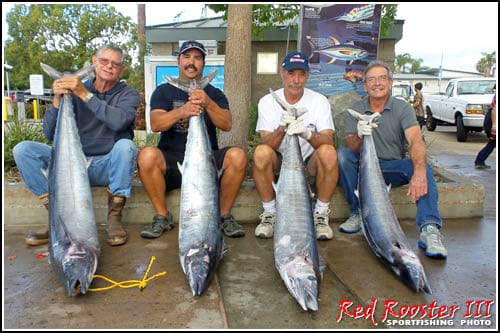 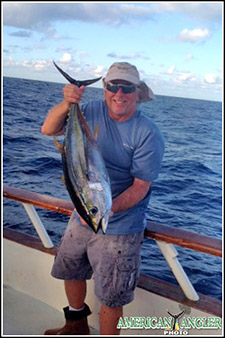 “Today felt like we were back on a long range trip. We had very steady tuna action all afternoon. It was such good fishing I hardly had time to get a couple of photos. We have another day down here on the Ridge and then it’s time to start the move back up the line. so we are going to look at another spot in the morning and hope we have our good luck going on still.” 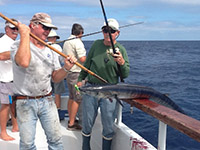 “We have had good yellowfin tuna fishing the last couple of days along with a few dorado. We did have an unusual jig strike on the trek south, a wahoo bit the jigs that was about 3 pounds and about 20 more bit our jigs that were about the 4-8 pounds, we released all to live and grow up to fight another day. With the warm water this year there have been lots of out of the ordinary sights for us. We plan on giving the rocks a try tomorrow so wish is luck. 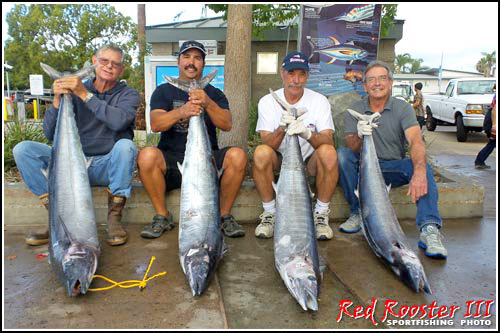 The eight-day trip was sponsored by Seaguar, Catchy Tackle and Hayabusa, and anglers aboard caught 260 yellowfin tuna, 175 yellowtail and 70 dorado, mostly on The Ridge. 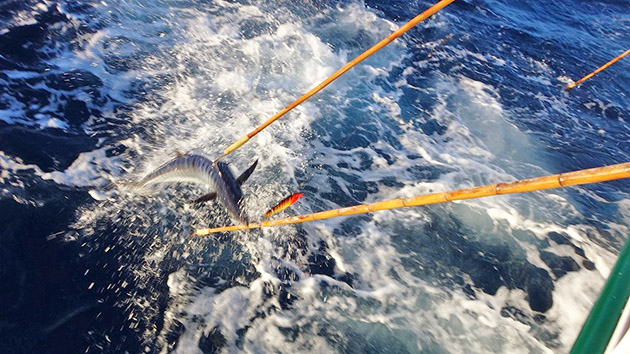 “The rocks didn’t disappoint us. We had decent fishing on wahoo, yellowtail, and some grouper. All the wahoo were nice quality fish, and the yellowtail were in the 20 to 30-pound range. What a day we had! “Our weather improved just a little, but we have 15-plus knots of breeze now. We are moving north trying to find more yellowtail and maybe a halibut or two. We still have lots of time, and hungry anglers. “ 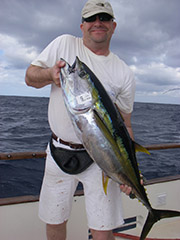 “This morning started off a little on the slow side. After some searching in a new area, we found what we were looking for, tuna biting everything in the water. The fish were all mixed up as far as size goes from release models to 30-pounds. We spent the afternoon engaged in cast and swing style fishing. At dinner our weary anglers were happily recounting stories of the day’s battles.

Pictorial honors today go to Captain Willy Cloyes and his wahoo, caught while we were in search mode.

The next day Sims wrote: “Very good tuna fishing this morning turned into a slow scratch by late morning. We took the opportunity to do a little prospecting and located an area holding bait and some dorado.”