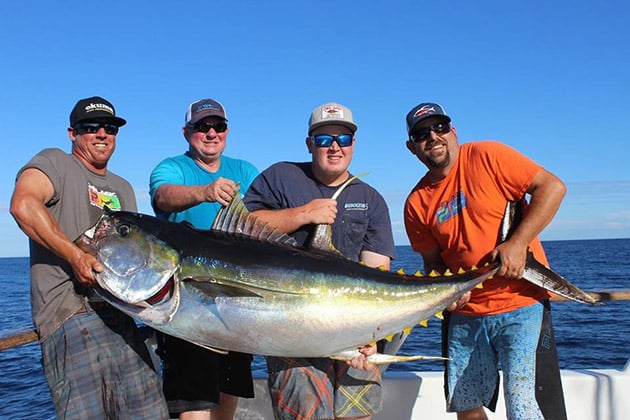 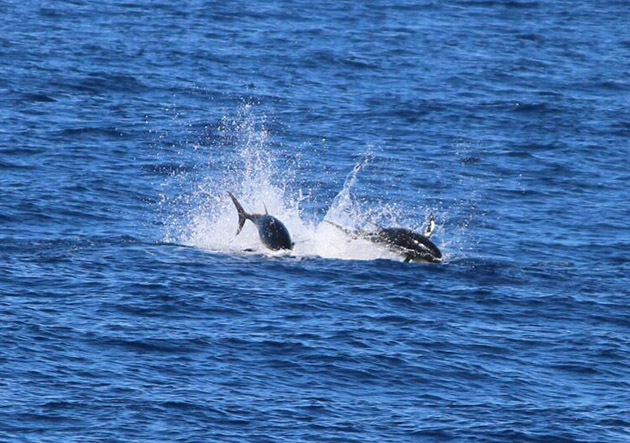 The transitional period the long-range fleet experiences in the fall each year is now over. You may have noticed that most of the fish taking jackpots recently have been wahoo. That’s a common thing when boats start heading into the waters off Baja from August to November. Tuna may be around, but they’re usually the 15 to 50-pound set; hence the skinnies in XL size can beat them out. Wahoo are highly desirable, but autumn long rangers really want 100 to 300-pound tuna. 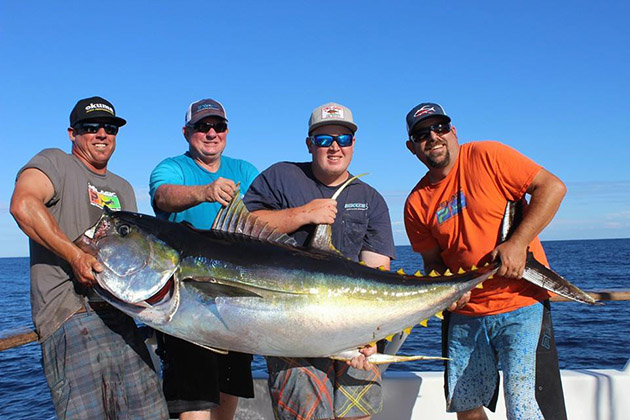 Pushing down into the waters over the lower banks, below Mag Bay, Excel has located big tuna, as the pictures they’re send back show.

The reports so far are sketchy, but we can see that anglers aboard the Big X are getting ‘em with bait and flying fish under the kite. So many good ones are jumping around the boat that skipper Justin Fleck is plugging them with the camera. Some of the fish are so large it makes me think we’ll see a 300-pound supercow caught before long. 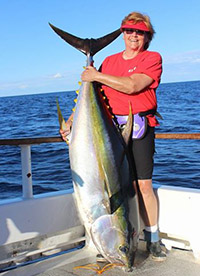 “Best show in town!” Fleck wrote on the boat’s Facebook site. He also posted a shot of Jeanie Merritt with a tuna that looked to be around 180 pounds. Some bigger ones were caught as well, as you can see. Jeanie is the poster girl for the month of December in the new 2015 Sportfishing Calendar, and the wife of chartermaster Brad Merritt. We’ll be hearing a lot more about these lower banks cow tuna in the near future, as this catch should start a gold rush. Royal Star is after ‘em, too.

“Another excellent day out here,” wrote skipper Jeff DeBiuys November 10. “We had lots of chances on these jumbo Wahoo again today. Same as yesterday, Capt Jimmy’s bombs and Salas 6X Jr. were the hot jig setups for today. A few on bait as well. It’s all about horsepower; the guy that cranks his jig the fastest gets the most bites, simple as that. Beautiful flat calm weather makes it all the more sweet out here. We are changing locations for tomorrow.”

Royal Polaris posted an update for November 10 and 11:

“Today we experienced scattered rain showers, along with occasional sunshine and big beautiful clouds. Our catch consisted of 50 Wahoo and 25 YFT.” 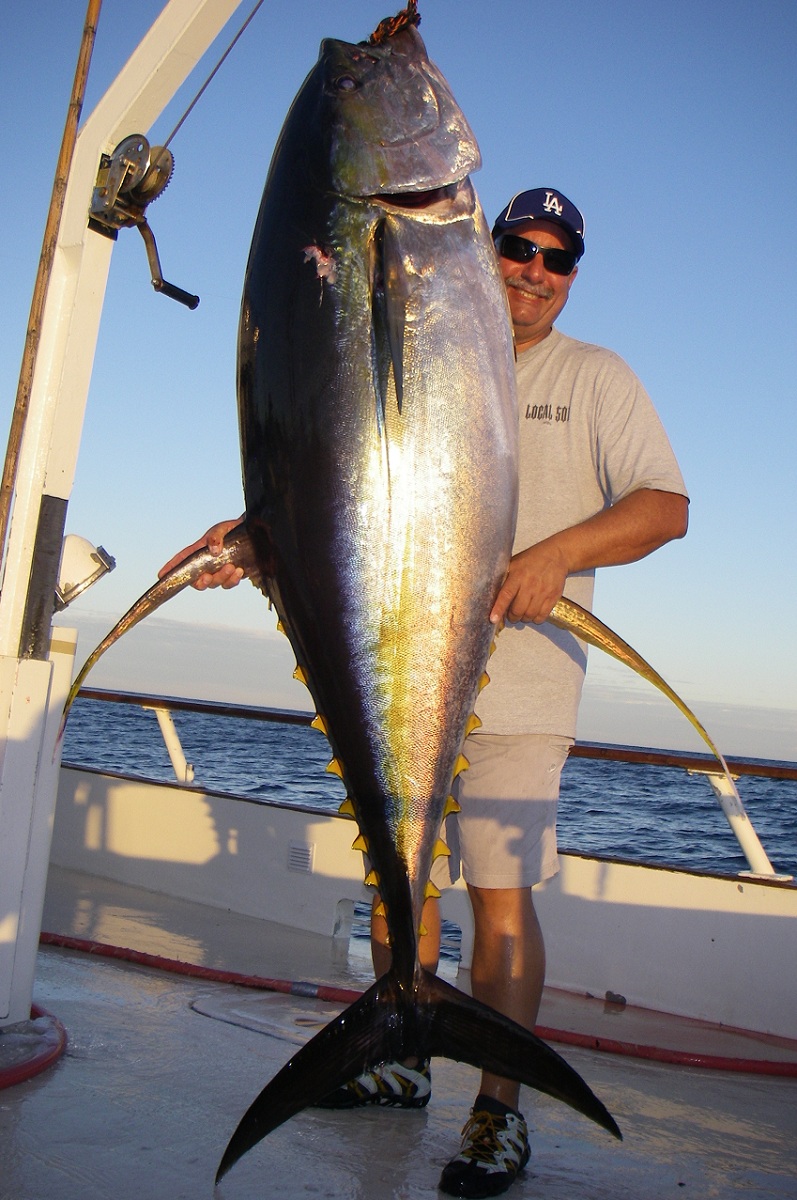 “The pictures speak for themselves today,” wrote Tim Ekstrom for the Royal Star November 11.

“Timing is everything; and preparation to take full advantage when opportunity knocks. Following a fruitless yet worthy morning of looking offshore, we kept with plan A, arriving at our chosen destination as the lunch bell rang. Upon arrival, despite adequate preparation thanks to flowing information from our colleague on site, all eyes could not help being stunned by the sights.

“Yellowfin tuna, in the size range we salivate over, dream of many a night, were flying from the water in just about every direction.

Gaggles, groups, singles, doubles – trophies, real deal jumbos, were up and active leaving no doubt in anyone’s mind about the quality of this opportunity. We had arrived. Now to settle in and get things started; easier said than done.

“The wily devils, surfeited on a smorgasbord of local bait, were tough to come by. Hours were spent in suspense. But for a few dandy bottom grabbers, and a few flurries on miniature versions of our nemeses that were promptly chunked, glory eluded us; the bastards were in the mood to eat, but not what we had to offer. The positive aspect of such an impressive showing is that there is no doubt harbored in anyone’s mind. Why we are here, why were are enduring such paltry results, those questions are easily addressed by two hundred pounders flying out of the water anywhere from fifty feet to a mile all around the boat.

“To that end I would be remiss to leave unmentioned the sublime beauty of the conditions we enjoyed throughout the afternoon. Giant tuna jumping and crashing everywhere were complimented by a crystal clear, crisply sharp atmosphere free of haze and obstruction. The brilliant afternoon sunlight reflected incandescent from the bright yellow second dorsal or sickle fins, jumpers to the west were backlit spectacularly – this was a special condition, a one-time epic recorded by fortunate eyes.

“And another fortunate group, a handful to be exact, were gifted a memory beyond the abstract. A few of those big mokes (sic) dropped their guard late, and we were quick to make them pay. Four of five chances at jumbos were decided in our favor. The one heifer that escaped got a lucky break amazingly dislodging a couple of giant, 15/0 circle hooks. You can’t win them all. But the ones we did triumph over cast a tone of success upon the whole adventure. We came, we saw, we achieved. Not exactly in proportions to satisfy everyone’s yearnings, but day’s targeting trophy yellowfin rarely do. Which is why they are such a coveted prize. They don’t come easy; best things rarely do.