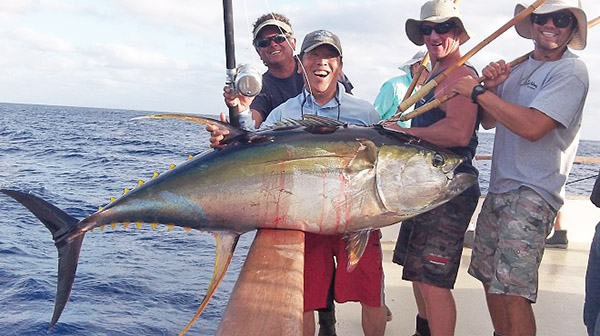 “We happened to be at the right place at the right time as fishing for quality grade tuna fish was better than we have seen in a while.

We had perfect conditions and 120lb to 285lb fish showing all around the boat. We had steady fishing most of the day but there was a three hour period where it was as good as it gets. We had four to seven fish hooked all the time and they were all giant big heavy fish. We had backups going in the water left and right and even though we had many heartbreaks and casualties we still ended up with seven cows and numerous other 150s to 190. Bill Randall boated the largest at 285 pounds and K.C. Brotherton had a 270, which were both personal bests. Lee Besse boated two over two and John Arndt, Wayne Kotow and Andy Brotherton accounted for the rest of the cows that ranged from 206 to 237 pounds. Everybody on the boat had several shots at these trophies.”

The next day Brian posted this: “We had great fishing this morning on 80 to 197-pound tuna with lots of action, it was a crazy biting fast situation. And now we’re heading home.” The Royal Polaris report May 6 said:

“We made a move back in to where we fished day one. It was a great choice as we ended up with a nice catch of wahoo along with a great afternoon bite on tuna.

We ended up with 3 over 200 pounds led by John Natsume (the little big guy) who caught a couple nice tuna including a 225-pounder. Gary Cotter, a veteran long ranger and great friend of mine (although he won’t admit it), caught a 216lber. Nilo Malong, famous for the ‘Nilo Pump (a combination of what some might mistake as an ostrich mating ritual and rail fishing) improved his personal best by a pound with a 213-pounder. One additional highlight was Garry Roberts who caught another personal best with a 145-pounder.

Star Gets It Going “A banner start to our annual Yamada 15-day this morning with seven over 200 coming over the rail in the first four hours of angling. Another 19 fish from 90 to 190 pounds were also boated throughout the day.

We are settling in here for the long haul, hoping conditions remain the same. “Jerry Goldstein boated this 245 on a sardine with a little help from captain Brian Sims.” “With poor fishing yesterday we were hard pressed to make the most out of the morning we had left to finish the trip. We were not disappointed, as the sign of big tuna was just awesome this A.M.

We had lots of chances at big ‘uns and had a few heartbreaks, but when the dust settled we had put together a beautiful catch: 36 tuna, three cows, and another 10 were 190 to 199 pounds and many 150 to 185-pounders.

The rest were stock grade 80 to 100 pounds. Big fish honors today went to Jim Poore with a 225-pound tuna, Clarence Becker with a 230, and Steve Vetrone with a 205-pounder as well. The sign of big fish was as good as I’ve seen in a while, too bad we had to leave at 1100 hrs. for San Diego. We will try to put some pictures up on our FB page in the next few days. Everyone caught fish this morning, and is now relaxing with the nice ride home.”