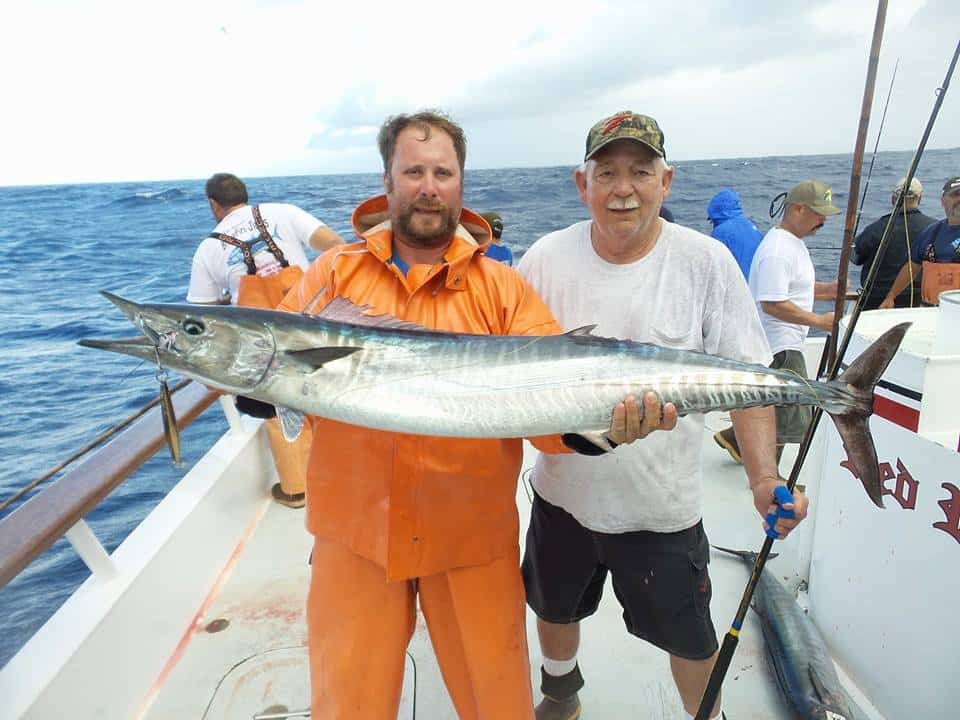 All Kinds Of Luck Ordinarily, anglers aren’t in a big hurry to get to trolling when the boat leaves port. In most years, there’s been little but small dorado, yellowtail or schoolie tuna to catch by trolling close to home, with the big fish waiting at least at day’s cruise away. This El Nino year is different, with many long range boats scoring wahoo just an hour or two from port. Check out the posting for Royal Star that follows, and you’ll see why–there’s Phil Wade with a 67-pounder!

Phil is a pharmacist who’s had more than his share of good and bad luck over the years. I was with him on the Excel, when he got a 66-pound yellowtail on the kite! None of us had ever seen that before. That’s good luck. But when Phil treated his friends to the fish later, it turned out to have ciguatera, or reef poisoning, and his pals had to get medical help. That’s bad luck. It was also the last time that disease was reported north of the tropic line. But when you’re a dedicated long ranger like Phil, you keep coming back. Nice skin, Phil. American Angler reported October 11: “As 2015 continues we are having more and more crazy phenomenons – today lightning struck us again as we proceeded to have more good wahoo fishing. Whatever the reason might be to have such great fortune, we will take it. It’s not very often when you can say you’ve caught a wahoo everyday of the trip and in some lucky anglers cases, they can. We are shaking our heads in disbelief, only hoping we can continue to have half the luck in our near future. There are many ways to look at this but some have said this trip, you just never know what to expect on a fall ten day. Long time veteran angler Yosh Ashikaga holds down today’s jackpot with this solid slug and a big smile to go along with it.”

Intrepid skipper Jesus posted this brief October 10: “We have been very blessed with great weather and some fun wahoo fishing. Now we plan on trying for yellowfin tuna as we work up and in.” Red Rooster III posted October 12: “We lost all the life at about 1:00 and made a tour of the other shallows for nothing. We are going to try it again in the morning and then work up the beach. We ended the day with 31 wahoo and 20 yellowtail. “The weather is still snotty but we are going to pick up the anchor an start trolling around. 22 wahoo and a few yellows for the morning.”

October 13: “We had a change in conditions last night and decided to move up. So far, just one wahoo offshore. We have a couple of spots to look and are working up toward Cedros.

“We found an area of porpoise and picked off 35 of these decent tuna. It looks dead now and we are on the move.” “We had excellent weather today,” reported Royal Polaris October 13, “with overcast skies, flat seas, and we even had some rain.  The fishing was good in the morning, but slowed down by the afternoon.  It was a mixed grade of yellowfin today, with one group in the 15 to 25-pound range, and the smaller category 10 to 14-pounds.

“We also had a decent mix of yellowtail today, up to 35-pounds, a nice grade of yellowtail. We ended our trip at 17:00 hours, and now we are headed for home and will arrive to Fisherman’s Landing at 06:00 hours.” Royal Star reported for October 9: “We departed the landing this morning (October 9) in hopes of getting some fishing time for the first day. Long story short, it was a day of searching for kelps. With a limited amount of time we couldn’t seem to find the right kelp. Although the day was slow we encountered a pleasant surprise, a double jigstrike on wahoo just a couple hours away from the dock. Our picture today is Phil Wade with this trophy 67-pound wahoo!”

On October 11, the boat posted:

“We started our day out anchored at one of the offshore banks targeting yellowfin tuna for our final day. Steady action on tuna fish up to 40-pounds, with a handful of yellowtail kept us busy virtually all day long. We ended this trip with a bang! You couldn’t ask for a better day on the water. Keeping one to five fish on the line all day was just what the doctor ordered for us.” Our day started out a bit on the odd side. We had wind, rain and choppy conditions and slow fishing to start, and then we had a sun-filled afternoon, catching nice-grade yellowfin tuna and yellowtail! Here is a sample of the tuna caught by Kimberly Day.

“The ticket was flyline for the tuna, and dropper loop for yellows on the bottom. We’re going to try it again tomorrow. The weather looks nice as well, so wish us luck.”