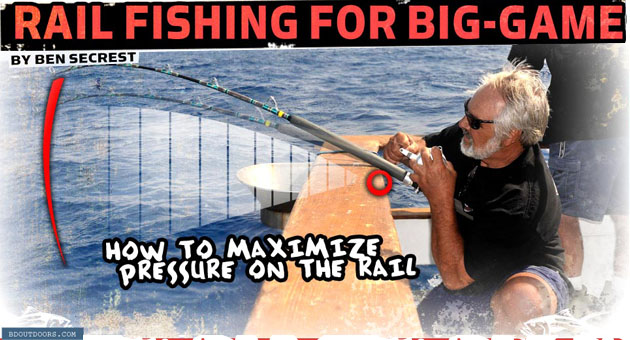 Even if you failed physics in high school, you can apply some simple principals fishing the rail to your fishing technique that will help you catch larger fish faster — without the use of a harness.

The term “potential energy,” is defined as the stored energy in a body or system due to its configuration or position. Think of a spring.

When a spring is compressed and let go, it overcompensates to both sides as it unloads its potential energy and restores itself to its original position. Energy cannot be destroyed, and the stored up energy in the spring allows it to rebound. The same principal can be applied to elastic materials. A compressed spring is full of potential energy — and so is a bent fishing rod. It’s basic physics.

Applying physics and the use of potential energy first surfaced in the long-range tuna scene in the 1990s. A core group of anglers didn’t like the confinement of the harnesses and belts needed to fish with stand-up tackle when applying heavy drag on a fish. These harnesses require that the angler literally lock himself to the fish, which at times can be a bad thing. Maneuvering around an anchor line and dealing with tangles while hooked up are a couple of examples that can turn into squirrely situations when you need to get the loaded rod unattached from the harness as fast as possible. These situations occur on a daily basis on a long-range boat.

To come up with an alternative technique, this group of anglers found that the rail was their friend and could be used as a fulcrum for their rods. The old myth that a shorter rod was better started to change as anglers realized how effective the rail was when used as a fulcrum. An experienced angler who knew when and how to utilize the rail during a battle could exert just as much pressure — or more — as the angler using a harness, especially at higher drag settings.

The evolution of rail rods revolved around the aforementioned principals of potential energy. The potential energy becomes stored within the longer rod and is available as the rod is loaded or bent. Again, think of the rod as a spring. Once the rod is compressed or bent, that stored energy causes pressure that can be felt on both sides — against the angler as well as the fish — until the rod unloads the energy and returns to its natural state. The rod acts as the lever and the rail is the fulcrum. The more lever that exists towards the fish, which is separated by the rail or fulcrum, the more pressure the angler can apply on the fish with less pressure felt on the angler. This is super important once you get the rod comfortably settled on the rail and start working the fish.

As a rod is loaded or bent during the fight, the angler can apply more pressure on the fish. For an angler to use this energy effectively, he must place the rod against the rail and use it as a fulcrum. Rail rods are longer than average stand-up rods, 7 feet being the standard, with a longer butt section for leverage purposes. The reel is placed a little further up the rod. The rod configuration varies depending on the angler’s preferred technique and physical ability, but the change in the rod’s butt section helps the angler put more pressure on the fish when using the rail.

Rail techniques consist of a variety of applications depending on the angler’s size, weight, equipment and fishing experience. The more the angler uses the rail, the better they get at taking advantage of new opportunities to gain line through small changes to their existing styles.

Using the Outside of the Rail

In one rail-fishing technique, the angler places the rod butt under his or her arm and uses the top of the rail or the outside edge toward the fish as the physical fulcrum and resting point to gain leverage on the fish during

the battle. With this technique you impart downward pressure on the butt to load the rod. As you max out the load on the rod, you can use that pressure to gain line on the fish. To release the rod, slowly move the tip back towards the fish and take a crank on the reel. You must do this in a motion where the rod continues to stay loaded as not to let the fish get its head down. When working a big fish, gaining line is a slow process but much more comfortable and effective. You must first try to break the fish’s spirit. Once you accomplish this feat and the fish heads for the surface, the rest of the battle entails gaining as much line as possible as the fish comes up towards the boat. Maintaining constant pressure is critical.

A second technique utilizes the inside of the rail. The angler accomplishes this while sitting on the rod butt or placing the rod under an arm and kneeling on deck. The key to this technique is to use the rail as a

fulcrum/resting point while loading and unloading the rod in a short, rocking motion. This is highly effective, but controlling the tackle can be tricky. Keeping a solid grip on the reel to prevent side-to-side motion is key.

When it comes to rail fishing, the first thing most folks ask is “when do you turn the reel handle and effectively gain line?”

At the beginning of the fight, a yellowfin will typically run straight away from the boat until it finally starts to sound and head for deeper waters. At this point the fight starts to become more of a straight up-and-down battle. As the fish gets closer to the boat, it will swim in a circular motion, with a tendency to go underneath the boat for half of the circle. The spiraling or “corkscrewing” tuna gives the angler a chance to gain line every time it makes a 360-degree circle. The key to landing the fish is cranking and gaining line as the fish swims toward the boat. Crank each time the fish makes it halfway through its circle and heads toward the boat. Once the fish moves away from the boat, use the rod’s loaded, potential energy to hold line by maintaining pressure the entire time. It takes time and experience to know how much pressure to put on the fish during the fight, but crew members can coach you through the process.

Landing the fish represents the last part of the puzzle. A good crewmember or gaffer will talk to the angler and tell you what stage of the battle you are in.

At the end of the fight, what is known as the landing game, the crewman will see the fish’s desperate attempts to go free and will tell the angler when to crank or lift. These crewmen can read the fish better than anyone and it’s critical that you listen and do exactly what they tell you to. Many times, the angler can’t see the fish as it circles, so following the crew’s instructions are often the difference between a caught fish and one that got away.

“Perfectly timed cranking and lifting will get the fish within gaffing range.”

As you become more experienced with rail fishing, your technique will improve. This technique is very popular with the long-range crew on the West Coast and I’ve seen several bluefin tuna guys on the East Coast looking to adopt it for their inshore fishery on 200-plus-pound fish. You can use these techniques on the rail or covering boards on the transom of any sport-fisher. It’s more comfortable for big-game fishing and an effective way to even the playing field. Give it a try, you might just be surprised at the amount of pressure you can put on a big fish. But, expect to get some scratches and dings on the rail. Consider those battle scars.

A lifelong angler, Ben Secrest started fishing at an early age with his father and has spent a majority of his life pursuing game fish on both coasts and all over the world. He has worked in the fishing industry for 25 years and is presently the Vice President of Sales and Marketing for Accurate Fishing Products (www.accuratefishing.com).

Ben Secrest
A lifelong angler, Ben Secrest started fishing at an early age with his father and has spent a majority of his life pursuing game fish on both coasts ...