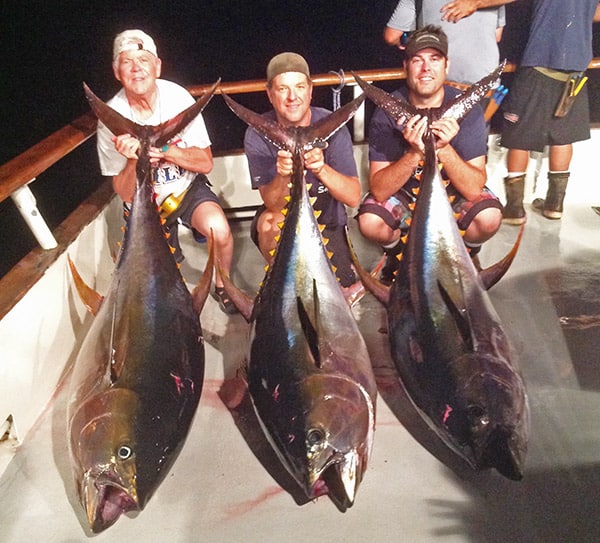 Showing Through A Plunker “We saw plenty of fish jumping around all afternoon but they never really got with it. Even though we barely kept one fish hooked at a time, it seemed like we were always in the game because of the way they were showing. Overall the day was a success as we were able to open the hatch and use a few tags.

“The brother team of Galen Steward and Sam Cornell show off one of the better grade fish that was landed this afternoon.”

Spinning On The Hook “When we woke up we found that we had lost all current conditions and the boat was spinning circles. We ended up catching a couple of handfuls of fish and several were the right ones.

“Don Bilteau boated the biggest one. It weighed in at 230 pounds. Greg Stoney, K.C. Brotherton and Wayne Kotow (shown fighting his fish in the background) also landed low twos, from 202 to 209 pounds. Being that the last two afternoons were on the slower side, we are making a move to maximize our fishing time.” “We arrived early at the Bank and caught flyers for the day’s fishing,” said the May 4 report for Royal Polaris.

“After settling in our spot, we immediately hooked several fish and had a nice flurry in the dark.

The fish put on a great show, but as the sun rose, they decided acrobatics were more fun than battling us. We watched thru most of the day big fish blowing out on all sides. Fun to see, but better to catch.

Highlights: The hot angler of the day was “The Doctor” Gary Edwards catching the two largest tuna of the day. Dr. Gary is a long time angler on the RP, but although a skilled physician (working with his hands), he seems to have issues holding on to his fishing rod. Prior to departure, some of his friends gave him a parting gift of pine tar that seemed to do the trick. The best highlight was Fred Losey’s truly acrobatic move worthy of Cirque du Soliel. Fred borrowed Richard’s kite rod this morning and had a nice fish on. Well, Richard fishes a “stupid tight drag” and happens to outweigh his brother by 30 pounds. Long story short, the fish pulled and Fred did a one handed rail grab scorpion move where his feet almost touched his head. Somehow he stayed on deck but surrendered his brother’s rod a la ‘The Doctor.’” “Things got going today around 0300 and around 1000 hours they got lockjaw. I will say, the fish we did catch and lost were mostly good ones, as we had ample chances this morning. The overall grade was 130 to 255 pounds, with lots of 140 to 190-pound fish. “The standouts today were Steve Pettibone with a 255-pound tuna, Rick Berg got a 215 and John Collins caught a 205-pound tuna. The afternoon was saved by some Wahoo that kept us entertained. We got 17 tuna and a couple of handfuls of skin for the day. Great weather all around.”