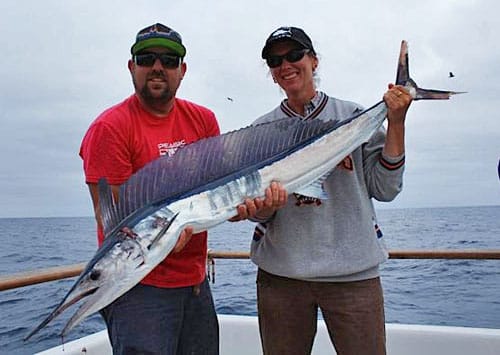 From Intrepid Sportfishing, “The Amero four-day charter returned this morning, August 31. Thanks again for a very fun trip. See you guys next year for five days. “Captain Mike Ramirez called in late last night with an update: “We are done fishing for big bluefin. We decided to go fishing offshore today. We had some nice big dorado and school sized yellowtail. In addition, we caught a couple shortbill spearfish. The Okuma 5-Day trip is winding down but we are all happy and really like this great group of people.” “We had an excellent day of yellowtail fishing! The majority of the fish were in the 18 to 25-pound range with a few smaller and a few bigger. The hot ticket was 50-pound line, a 3-4-ounce sliding sinker and a nose hooked mackerel. We will be spending the night at the island trying to get a couple tanks of mackerel for tomorrow’s fishing. The plan is to fish for yellowtail for part of the day and then take off to start working our way up to the local tuna grounds.”

“We left yesterday on our four-day Accurate trip. The rep, Matt Elash, brought a bunch of goodies for the passengers aboard and we departed the dock around 11A.M. We traveled down South and ran into a nice school of yellowtail on the first day, a good way to start any trip. We ended up with 70 yellows for the day.

It’s about one P.M. on Day 2 and we easily already have another 70 yellows aboard the boat and have plenty of fishing time left. We will begin to make our way back up and look for tuna either late tonight or early tomorrow morning.” The fishing this year has been very good at least as far north as San Francisco, says long ranger Phil Havlicek, who lives in the Bay Area. He sent along a few shots, along with his remarks indicating fishing has been better than normal for both striped bass and salmon. This shot shows Phil with his season’s best king salmon to date, a fish of 32-pounds, taken off Stinson Beach. I grew up in Oregon, and never got a chinook as large as Phil’s.