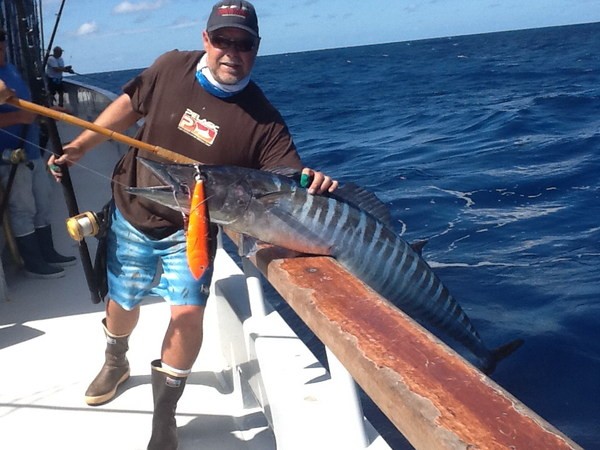 “With a little bit of a different time schedule than yesterday,” posted American Angler on Valentine’s Day, “we hung tough and put together another nice day. Though it was last minute, we will take whenever we can get it and a slow start wasn’t such a bad thing because the last two hours of daylight we had great success with fish from 100 to 198-pounds. Very encouraged with the sign we’ve seen so far, we hope to keep piecing the puzzle together on these beautiful grade fish.” “The fishing today was regulation biting fish,” posted Independence skipper Jeff DeBuys February 13, “with good fishing conditions. Most fish today were of the 140 to 180-pound grade with a few bigger and a few smaller. One 215-pound fish made its way on the boat and 2 other big ‘uns escaped. Everyone got to yank on a fish or two today, so we are going to sit tight and try again tomorrow.”

The next day DeBuys wrote, “We hope everyone had as good a day as we did out here. Gooood fishing again for 130 to 215-pound tuna, a good average at 150, I would guess. A good morning hit and a good afternoon hit for us. A few nice wahoo were around as well. The topper was a 150-pound kamikaze fish caught by Lynn True in the dark tonight.” “We made it here to the zone around mid-day,” noted Intrepid skipper Kevin Osborne February 14, “and had a pretty good afternoon to get things rolling. The wahoo were the first agenda and it didn’t take too long to find a good “Wolf Pack” that wanted to bite. The late evening saw good sign of tuna were we boated some good fish up to 170-pounds. Not a bad start with 41 wahoo and 11 nice tuna for the afternoon. We did have one giant that went out on a back-up rig, but the main line broke shortly afterwards. We are going to get some of the local baits and be ready for a full day tomorrow.” “The bad news today is that the majority of fish decided to take the day off,” said the report from Royal Polaris Valentine’s Day. “The good news is that we put our first cow of the trip in the barn. Gail Lynch landed the first and biggest fish of the day and it tipped the scales at 204.

“It turned out to be a two for one for Gail, as there were two major prizes on the line, both of which he won. For getting the first 150 or better baitfish on the deck he was awarded a Calstar rod blank. There was also an Accurate Boss 600 H reel for the biggest tuna over 200-pounds and that prize also went to Gail.

“As for the rest of us good luck was hard to find. For the day we totaled 16 tuna and 6 wahoo, the majority of fish in the same size range as yesterday: 50 to 180-pounds.”

The next day’s report said, “As far as fishing goes, it was a rewarding morning for a few on board but there just hasn’t been enough to go around the last two days so Frank has decided to try an alternate location tomorrow. We did have eight tuna landed at 9:30 when we began travelling, and as they have been, they were an excellent bunch in the usual slot of 50 to an estimated 165-pounds, landed by Anthony Ramirez. It qualified him for the daily prize offering of an SKB tackle box for the first fish over 150-pounds caught on bait.

“Major heart break of the morning was a big fish (we’ll never know just how big) lost by Wade Wells when the leader finally chewed through after an hour and 45-minute battle. He stuck with it the whole time and gave it his all but it was just not to be. We will cruise until early tomorrow morning under our customary blue skies, warm weather, and calm seas.” While it may not be long range fishing it is worth a mention!

“There has been a lot of news and excitement about Brian Fagan and his incredible WSB catch on Jan 28,” wrote John Campbell February 15. John is running the 2016 Yellowtail Derby.

“He (Fagan) is featured on Western Outdoor News, The Log Newspaper, and was a guest on Rod & Reel Radio with John Cassidy yesterday evening.  He has submitted his catch to the IGFA for a line class World Record. Attached is a new shot of Brian Fagan with his 74.2 WSB on the LJ Shores Beach.”