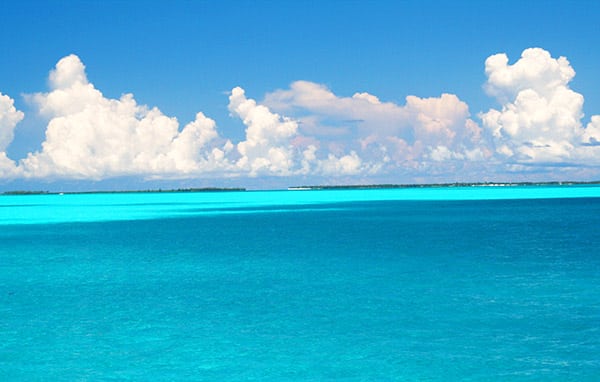 They say Long Island in the Southern Bahamas group is the most scenic Island in all of the Bahamas; with its white sandy beaches on the southwest coast to world famous Deans blue hole (the worlds deepest at over 600 feet) 5 miles northwest of Clarence Town. The Island is properly named being over 80 miles long and only 4 miles at its widest point. The population is only about 4,000 friendly islanders who do everything they can to make your stay on the Island a magical experience!

With the 500 fathom drop off a mere 4 nm miles from Flying Fish Marina in Clarence Town you can literary be marlin fishing within minutes of leaving your slip. The numerous shelf’s, reefs and pinnacles hold marlin year around, but the peak season for Blues is May-June. An incredible bank, just a few of miles to the Southeast of the marina shallows up to less than 10 fathoms with drop offs to over 500 fathoms on each side, holds massive schools of feed and tuna. We found the blue marlin fishing on this bank to be red hot, and even caught a 600lb blue in only 250 feet of water! Working the drop offs, current lines and edges of the school tuna and bird piles kept the reels screaming! If for some reason you get tired of tagging blues on the bank, an hour run from the southeast edge is a pinnacle off the northern tip of Crooked Island that never failed to produce; we found the blues between the lighthouse on the island and the pinnacle in about 350 fathoms of water. Onboard Doc Conkle’s pristine 50 foot G&S ‘Miss Babbie‘ we fished our way from Key West to Long Island in two and a half days via the Great Bahama Channel, staying north of the shipping lanes of Cuba. We could have shortened up the trip but we had a hard time pulling ourselves away from Dana Bank only 36 miles to the southeast of our destination.

This is one place you do not want to miss, from depths of almost 700 fathoms, this sea mount rises to where you can see the top of the reef from the tower.

This is one real fishy place and renowned for holding world-class wahoo, with the peak run in the winter! We stayed off the edge to save our marlin lures from getting creamed!

Most of the blues we encountered were very aggressive, smashing short corner lures with abandon; most of the time it was just a huge hole in the water and a screaming Shimano! We tagged fish from 150lbs to 600lbs and lost a couple really good fish. In June of 2010 the only billfish in these waters we caught or even saw were blues (bummer huh?), but I was told that the whites can show in pretty good numbers around early May. Live baiting around the schoolie yellowfin packs on the banks with a bridled finner proved deadly, but with the fish slamming lures we preferred trolling lures. We caught very few other game fish around Long Island, but I think this was due to us towing a marlin spread 100 percent of the time. Doc is not a heavy tackle guy and with nothing larger than a 50W we were very lucky to be on a G&S with their known ability to back down HARD! We had to put the girl to the test on a few of the bigger fish… The approach into Flying Fish Marina is well marked, and the water is so clear you can see all the reefs outside the channel. The shallowest spots we encountered were 8 feet under the keel. Clarence Town Harbor has a nice wide entrance and is easy and straightforward. The controlled depth within the Marina is approximately 8 feet at low tide. With only 18 slips the place can book up quite quickly so make arrangements in advance. The Marina has a good seawall, excellent slips that can accommodate big rigs and has a huge fuel dock. Mario Cartwright and his wife Claudia go out of their way to help arrange anything you may need, from a rental car to the internet. The fuel prices are very reasonable for the Bahamas; in June 2010 it was US $3.50 a gallon (that is less than we paid in Key West!). Water can be scarce on the islands so a water maker is a real money saver. Mario charges 30 cents a gallon at the dock, US$32 dollars a day to plug in, but his slip fees are very good at US$1.95 a foot in peak seasons Jan- July 15. Weekly and long-term dockage is available at reduced rates, making this a great place to base out of.

It is hard to take a day off from chasing blues, but the island has so much to offer that you gotta explore the place. Renting a car from either Mario or at the Rowdy Boyz Lodge (just a 5 minute walk from the slips) is very reasonable at about US$70 a day. The food at Rowdy Boyz is fantastic; I highly recommend the conch chowder. It is the best chowder I have ever had, and this is coming from a guy who grew up in New England! They also have free Internet, so this became a popular spot to sit by the pool, drinking an ice cold beer while checking the e-mail and looking over the beautiful reefs! Once you rent a car just 5 miles to the northwest is where you will see the signs that take you to Deans Blue Hole. In a protected bay just 50 feet off the beach you will amaze at this wonder of nature. It is the world’s deepest underwater sinkhole, dropping to a depth of about 660 feet (202 meters), making it more than double the depth of most other large holes.

Snorkeling over this abyss takes your breath away; I couldn’t stop thinking how it came to be. Although I didn’t get time to participate, the scuba diving is also reported to be wonderful here. Pack a fly rod with you; because the west side of the Island has world-class bonefishing. There are numerous guides that will tie you into these beasts of the flats. A lot of the bigger sportfishing boats that spend time here have foredeck cranes and pack around a flat boat for good reason. The bonefishing opportunities here are amongst the best to be found anywhere; double-digit fish are common and the action can wear you out! We even saw 10-pound bones swimming under the boat at the slip! At the very northern tip of the island you can take a short hike to a monument honoring Christopher Columbus. It is thought that Long Island was his third stop on his first voyage in 1492. The view from this monument is stunning, over looking the crystal clear waters and rugged coast.

Chances are very good that if you visit this magical marlin hotspot you will see the ‘Miss Babbie’ in one of Mario’s slips. We will be easy to spot, just look for the tag flags flying! Stop by for a rum drink and some good fish tales…

Getting there and where to stay; You can fly out of the USA to Nassau International Airport on just about any major airlines, mainly out of Florida; then a daily hop flight to Long Island via Bahamasair. There are also numerous charter planes available out of Florida and Nassau if you can’t meet the schedules.

Remember you will need a passport!

There are some really good upscale resorts on the Island; the three I know of are:

The Gems at Paradise

Dave Conkle can be reached at [email protected]