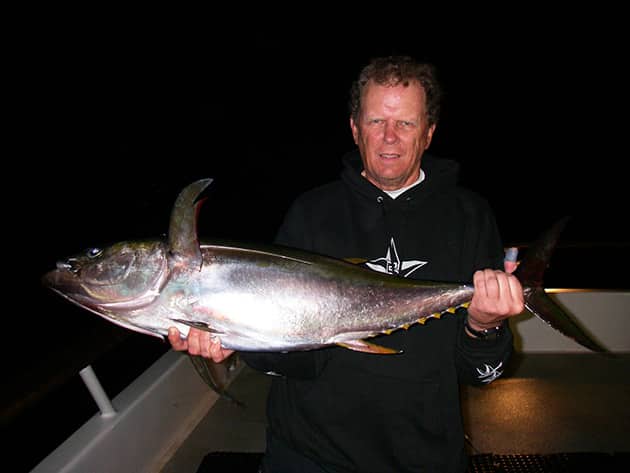 I have been “hooked” on fishing for tuna since my days of being a deckhand on a six-pack boat off the South Texas Coast during the summers of my high school years. The blackfin tuna that were occasional catches not only fought harder for their size than the more common king mackerel and mahi, they were excellent eating. At that time, the IGFA record was around 40-pounds and we were getting fish in the high 30’s’. I never did catch a record but the seed was planted in me as a tuna junkie. Years passed including school, marriage, and a job in Ohio. Then, we moved to Melbourne, Florida and the prospect of tuna fishing re-appeared. 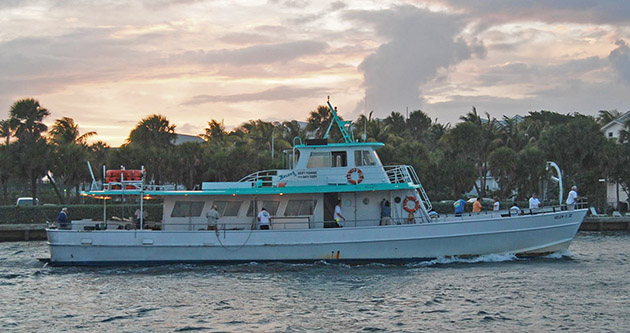 I found that there was a boat out of Pompano Beach, Florida, running multi-day trips to the Bahamas. The Helen S trips were primarily drift fishing for snapper and grouper but there was trolling to and from the Bahamas and yellowfin tuna schools were occasionally spotted working under birds. We would troll through them and pick up a few tuna, mostly yellowfin in the 20-40-pound range. The boat carried no live bait and had no means of chumming to keep the schools nearby after a troll stop. Some of the trips were as long as ten days but the boat was only marginally set up for comfort. It carried a passenger load of about 15, but there were only six bunks (outdoors). The rest of the passengers slept in the galley. Most nights were spent in hotels in the islands. In 1993, the Bahamas instituted severe limits on the fish that could be kept, making the multi-day bottom fishing trips impractical so the Helen S went back to local trips, which had no interest to me.

I had read articles in national sporting magazines about long range trips out of San Diego. 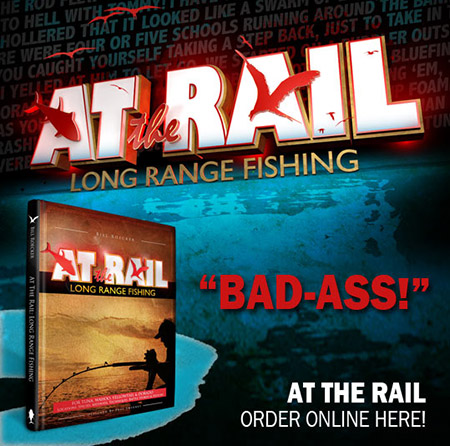 I bought a subscription to Western Outdoor News and started following the reports from the long range fleet. In 1994, I pulled the trigger and booked a 17-day trip on the Excel, my first trip out of a West Coast port.

I had watched videos and read books.

I owned a Penn 50TW (single speed) a Penn 30SW and a Shimano Beastmaster (4/0 size graphite framed 2-speed) but I would have to rent everything else. All that I packed was clothes and toiletries. 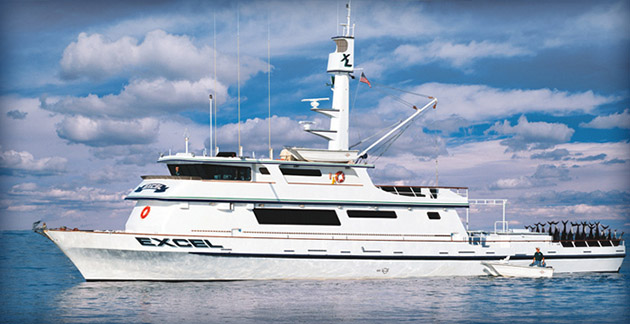 At that time, the Excel was the newest and largest boat in the long range fleet. She is still the largest at 123-feet. The fleet at that time fished the Revillagigedo Islands – San Benedicto, Soccoro, Roca Partida, Clarion, and the Hurricane Bank on the long trips. Keep in mind that these were days before spectra, fluorocarbon, kites, circle hooks and, in fact, 2-speed reels were not common. 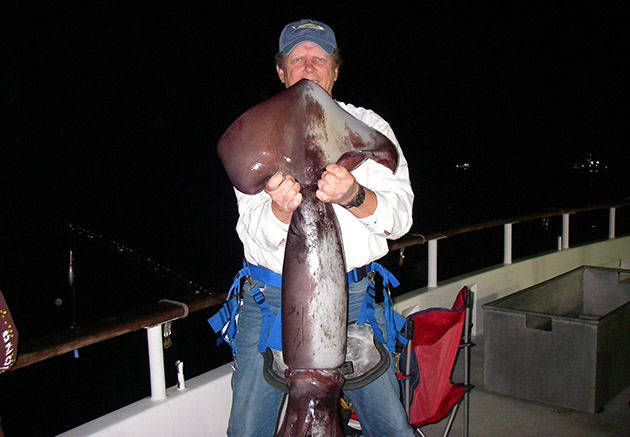 I embarked on the trip with the thought that, if I landed a 100-pound tuna, the trip would be a success. The first tuna that I caught was about 75-pounds and I got it on the Shimano 2-speed and 50-pound test and it kicked my ***.

I immediately wondered what I had gotten myself into.

I did get a 100+ on that trip and I learned to use the harness properly and to breathe evenly (I think I held my breath for the entire fight with the 75-pound fish). During that first trip, I saw my first cow (200+) tuna caught. It was on 100-pound monofilament loaded on a Penn Senator 9/0. I was impressed. It was the only cow landed on that trip. For that trip, I landed four wahoo and nine yellowfin up to 155-pounds. Coupled with the scenery and wildlife like whales, manta rays, sharks, and exotic fish, I was stoked. I had given no thought to what I was going to do with the fish upon return to San Diego, so I donated them to charity. 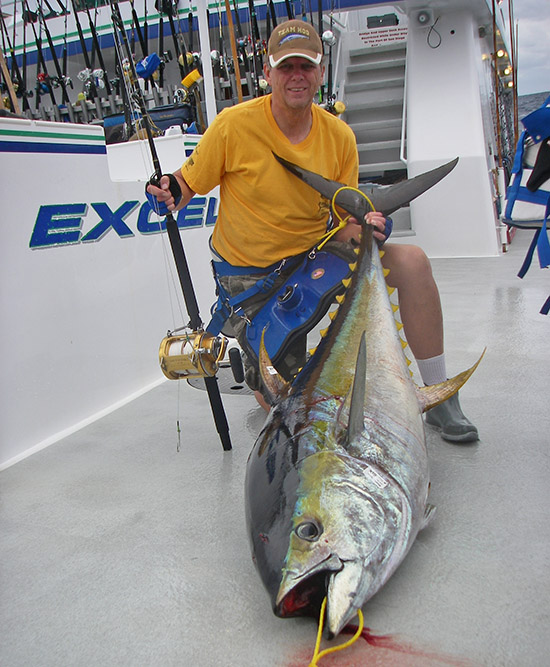 Staying in San Diego was also something new to deal with: there are several hotels within easy walking distance of the docks at Point Loma – none of them better than 3 Star but you are going fishing, right?

I fished on the Excel on a similar trip annually through 1997 when the Revillagigedos were closed to fishing by the Mexican government.

Reluctantly, I stopped going to California and concentrated on local Florida fishing. I did, however, maintain my subscription to Western Outdoor News so I could keep track of Long Range Conditions. In 2005, the fleet encountered epic tuna fishing conditions on the Banks off Baja near Magdalena Bay. It became normal for each boat to come back from a ten-day trip with 30, 40, 50 or more 200+ pound tuna. 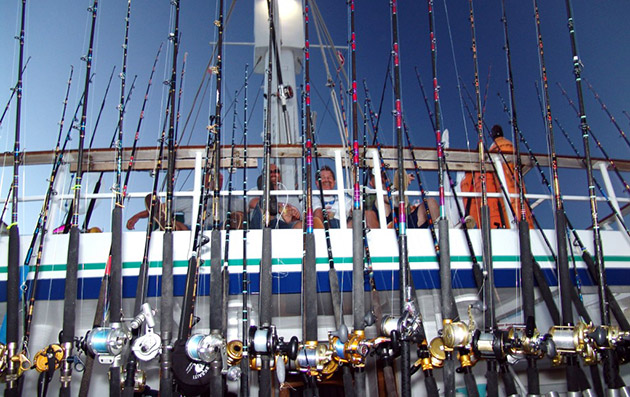 By then, I owned more appropriate tackle so getting it to San Diego and back was part of the logistics. I had settled upon a favorite hotel, the Vagabond, which is on the same side of the street as the landings thus making transport of my tackle easier.

After resuming the trips, I found myself shipping more and more ahead to the boat. The Excel and Fisherman’s Landing assist greatly in this. There is a UPS/Fed Ex store roughly two blocks from the Vagabond but, if you come prepared with a return shipment label and you use UPS, you can drop your gear off at the landing and they will ship it back. 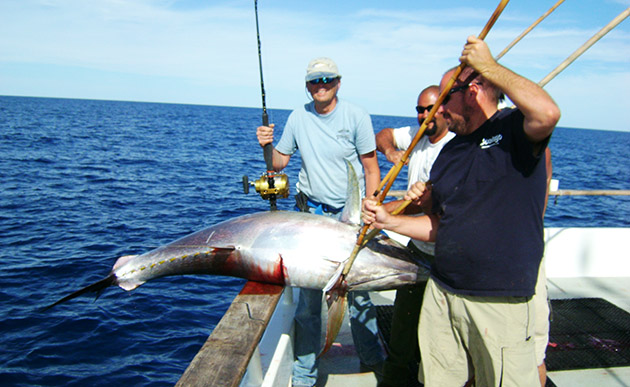 In 2009, I got my first two tuna over 200-pounds each on back-to-back days (230 and 237). The following year, I got my first and only super cow that weighed 345-pounds. The super cow is a story in itself: I was fishing a double sardine from the kite and had been waiting for something to happen for about two hours (kite jail). Suddenly there was a huge boil on the baits and I was on a fish. When I fish the kite, I use a Penn 80W 2-speed reel. I suffer a certain amount of grief from other fishermen for using this tractor, but I feel that, since I don’t have to let my baits swim naturally nor move around much, why not use the biggest, “baddest” reel you can? You can have your rod/reel locked into your harness/rod plate so you don’t have to hold it.

My 80STW has over 2000 yards of 130-pound test spectra. This particular fish acted really wild for the first hour but 180-pound fish (referred to as teenagers) often act that way – charging the boat, then running away; deep and on the surface. Then the fish turned away from the boat and started slowly but surely putting distance between us.

The crew can get a rough idea of the size of the fish by the pulse of the tail beat and they said this was a good one.

As the fish continued to take line, the Captain asked me if I wanted to go for a skiff ride. Even though I was in no immediate danger of running out of line, the more line in the water, the more things can go wrong.

Until recently, if you ran out of line, there were three choices: let the fish break you off when it took all the line; attach a backup rod and reel and toss your $1000 rig in the water, or get in a 15-foot skiff with a 15 HP engine and a crewman and follow the fish. (On my most recent trip, there were no skiffs available as some potential liability issues are worked out). 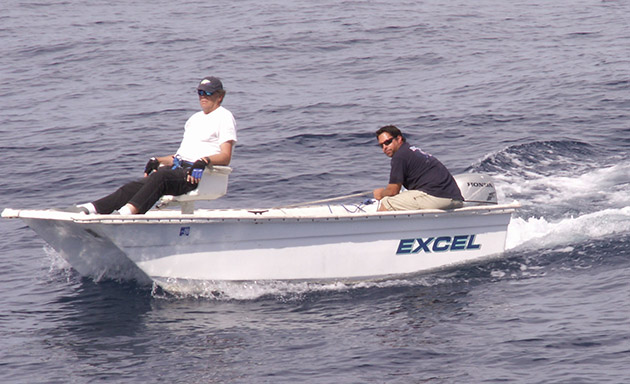 In any case, my response to the Captain was “absolutely!” So, at the 90-minute mark of the fight, with 800-1000 yards of line in the water and the fish still going, I climbed in the skiff and off we went. We were under power for an hour as we closed the distance and I gained line but then the fish sounded as tuna usually do. The crewman with me, Mike, shut off the skiff engine and we let the fish tow us.

There was a chair on the skiff with a gimbal so I had the rod in the gimbal, my feet on the gunnel, my harness attached to the reel, and a fish towing us in big circles. There was plenty of time to look around. We were three miles from the big boat. No wind but 6-8-foot long period swells. We saw a couple of whales in the distance, a couple of mahi swam by, one six-foot shark swam by – Mike said not to worry, it wasn’t the fish-eating kind. That made me feel better until I started thinking about what it DID eat. 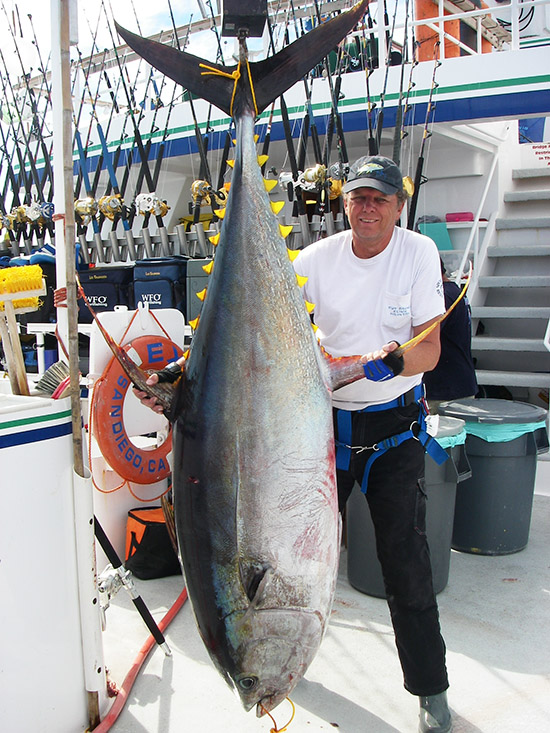 I gained line, six inches at a time and, at the 3-hour 20-minute mark, Mike sank a flying gaff in the fish, lashed it alongside, and headed back with our 345-pound yellowfin. At that time, the world record was 388-pounds. That record had stood for 35 years.

In 2012 and 2013, there were suddenly a half dozen yellowfin caught over the 400-pound mark. The first one was caught on one of the San Diego boats, while the last one, 445-pounds, was caught on the Excel. The new world record is 427, caught on a boat out of Cabo San Lucas. No 400+ pound fish have been reported since 2013. 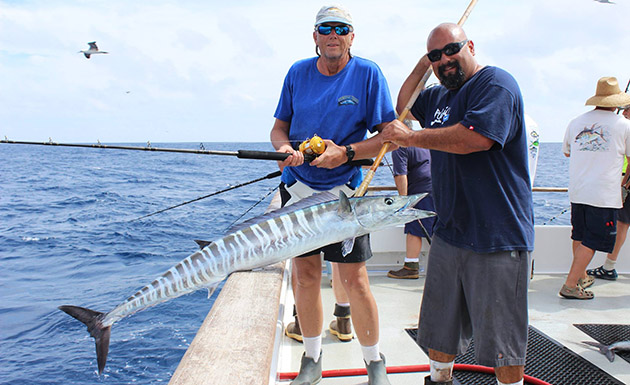 My latest trip on the Excel was unusual in many respects compared to most all the trips I have been on. There were more wahoo caught than I have ever seen, more rain than I have ever seen (even a lightning storm), and six very nice white sea bass caught during our return trip up the beach.

My passion for tuna fishing is not limited to San Diego long range boats. My boat, a 25-foot power cat is capable of making the 100-mile run to the east side of the Gulf Stream off Florida for yellowfin. The biggest we have put in my boat was about 75-pounds. 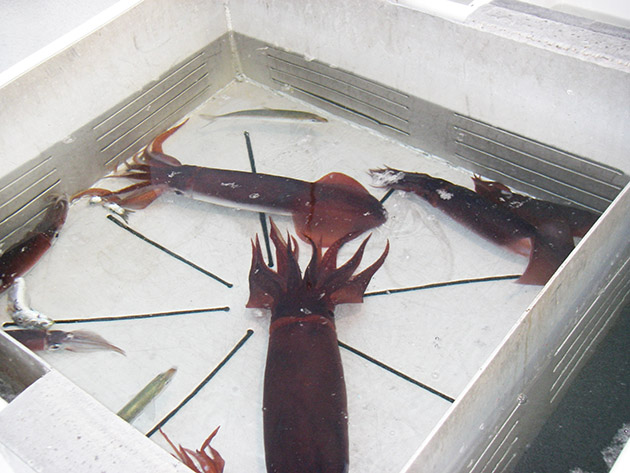 Additionally, I have made two trips to the oilrigs off the Louisiana coast and I have another scheduled for August.

What next? I already have my reservation for a 15-day onboard the Excel in 2016.

I am also looking into what is required to catch a bluefin – either a smaller one off California or a larger one off the East Coast.

Eric Griggs
Born and raised in West Texas – 600 miles to the nearest saltwater. Master's Degree in Computer Science from the University of Texas at Austin. Work...