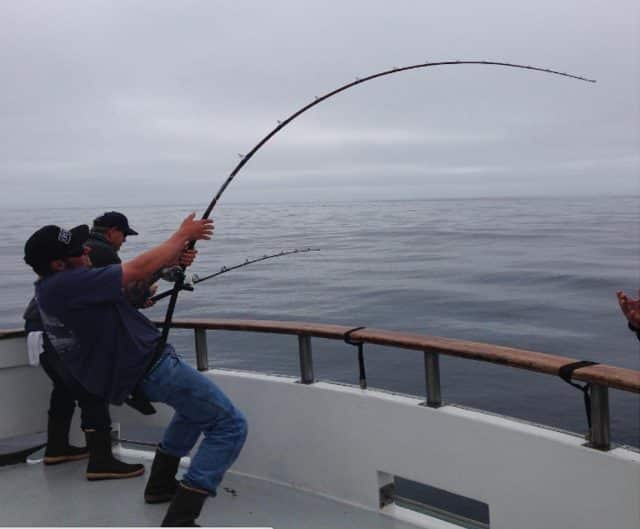 I woke up “late” Sunday morning.  It was all of 6:30 am or so when I rolled over and checked my phone.  Someone tagged me on a post.  Usually this means someone is trying to sell a trip and they want more eyeballs (I hate that) on their post.  What a nice surprise, a buddy just wanted to make sure I saw this video (warning – some salty language) shared by Capt. Gavin Harbour of Pacific Queen Sportfishing.

The video was actually taken by pinhead Daniel Montoya.  Daniel is on the upper deck of the Queen and you see Gavin hooking up on his popper setup, a 12-foot Roddy with a Torium 20.  You see a large fish crash the surface and miss.  Then it jumps clear out of the water and smashes the popper.  You realize just how big this fish is and the long pole immediately gets bent in half as the massive bluefin takes it’s initial run.  It’s the stuff of dreams.

The reaction from other people in the industry…captains, crewmembers, as well as the general salty public has been the same.  The video has over 22,000 views on Instagram.  My facebook stats say over 60,000 people have seen the post! 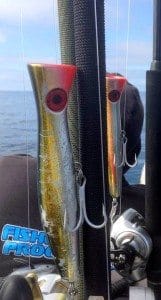 Let’s take a step back.  Thirty four anglers stepped aboard the Queen on Friday night for a day and a half trip.  The trip was billed as bluefin or bust.  The only promise going in was the opportunity for bluefin glory.  True to form, they saw a bunch of fish as Capt. Gavin chased around the schools, only to have them sink out upon reaching them.  The only way to get a shot was to place a long cast in the direction of the breaking fish, and hope one would take the offering.  Big poppers (like the Halco Roosta Popper 195 Haymaker pictured in San Diego regular Elmer Mun‘s photo right) are the order of the day.

They were having a rough go of it, when Gavin took matters into his own hands and proceeded to hook and hand 2 giants.  The video ends as you see Gavin’s rod go bendo.  What happened next you ask? 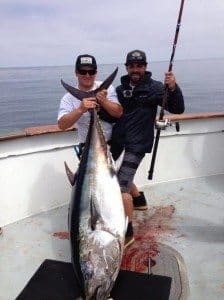 Kyle Stafford, a union electrician from Huntington Beach, picks up the story from here.  “They hooked the fish and tried to hand it to these two other guys that were deaf. They tried for like three minutes, but neither one picked up.  That’s when they came and got me.  I fought the fish for a hour before we got it in. Smoked the reel in the first ten minutes!”

After an excruciating hour long fight on the long rod, Kyle was pretty much toast.  He told me it took 3 hours of recovery before he could even pickup his own rod and cast again.  It took 4 crewmembers with gaffs to haul the massive fish out of the water and onto the deck.  Truly a team effort.

It’s just like I was saying in my El Nino Expectations post. There’s an opportunity now to catch a fish of a lifetime.  If you can deal with those odds (2 in 34), you’re good to go.  Better odds than winning the lottery.  Good luck if you get out there. 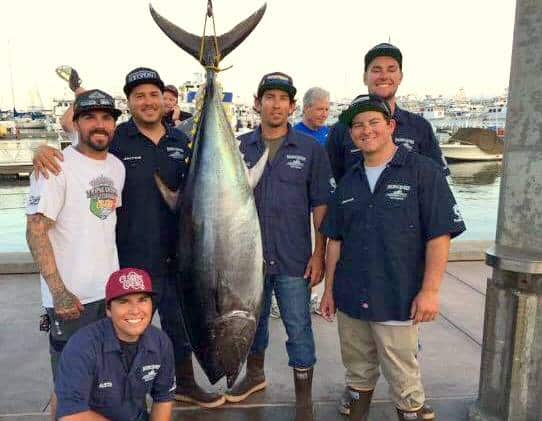