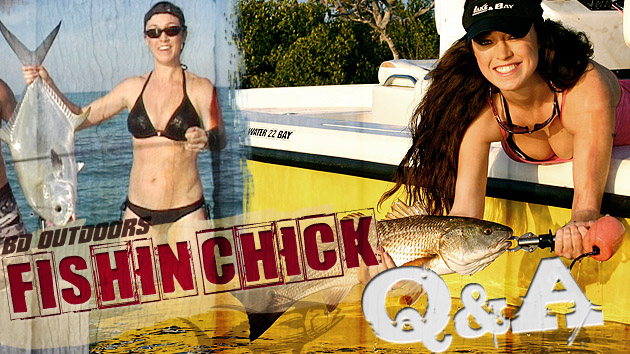 It’s not every day you meet a female angler who can just as easily work the cockpit of a boat as she can work the runway. Originally from Missouri,

Deidra Bridger now works as a first mate in southwest Florida when she’s not representing an outdoors company as a spokesmodel. She spoke to us about how she got into fishing.

Q: So you grew up in the Show-Me State (Missouri), how’d you end up in Florida?

A: In 2005, I left the Show-Me State to complete a college internship in the Sunshine State. Although the backwoods of Missour’a speak deep to my soul, I found a new zest for life in the salt, sand, sea and sunshine. After graduating with a degree in marketing and Spanish, I returned to Florida to start the next chapter of my life in Tampa. I hopped on the scene as a spokesmodel representing outdoors brands and organizations at tradeshows, events, video and print. Career pursuits and fishing opportunities lead me to relocate to the pristine estuaries of southwest Florida, indeed one of the best fishing spots in the world.

Q: You must’ve got your start fishing in ponds and lakes… Do you still like to freshwater fish?

A: Oh yes. One of my first memories is crappie fishing on Lake Perry in Kansas with my daddy when I was about four. He put some ugly brown worm on my Snoopy pole and I wanted the pink sparkly one. Taking action into my own tiny hands, I tugged so hard at the tackle box that when it finally opened, I sent myself plummeting into the ice-cold March lake water. So yes, my roots are in freshwater.

Q: Tell us about your first experience fishing in saltwater.

A: The first time I went saltwater fishing I ended up with a shrimp stuck in my hair! I was out with some buddies just having fun and we caught seatrout and a few snapper. My first serious saltwater fishing trip was with Capt. Bo Johnson. He took me shark fishing. We caught ladyfish, jacks and blue runners for bait then set up in Rocky Channel in Pine Island Sound. Within minutes I was playing tug-o-war with a 100-pound black tip. Next thing I knew, Capt. Bo pulled the shark in the boat and threw it in my arms! That is probably one of the coolest photos I have.

Q: When did you decide to start working as a deckhand?

A: Well after fishing several times together, Capt. Bo began to understand my career pursuits and passion for fishing. He recommended me for a marketing and spokesmodeling role at a website that ran into funding issues after four months. I had moved from Tampa to Cape Coral for the job so I had to figure somethin’ out. At the same time Capt. Bo was transitioning from the professional tournament world back to his guiding career. So in reinventing ourselves, we teamed up! I rig the rods, bait hooks, cut chum, run the boat and make clients laugh. I also do the marketing and join Bo in tournaments and TV shoots.

Q: You’ve done well fishing in tournaments. Do you like competitive fishing, or would you rather just go out and fish?

A: Yeah, winning the Outdoor Channel’s 2012 Mad Fin Shark Series with Capt. Bo was absolutely a highlight of my life. I’m definitely competitive. I would like to fish more tournaments, especially those that are televised. However there is somethin’ to be said about the no-pressure scenario where your peace and quiet is interrupted only by a screaming drag.

Q: Do you make your entire living from the ocean?

A: Although the majority comes from taking folks fishin’, we also have a Shut Up & Fish line of men’s t-shirts, ladies tanks, visors and performance shirts.

Q: What are the most common trips you guys run?

A: We specialize in tarpon, shark and goliath grouper action, as well as redfish, snook, trout, and cobia. Bo used to wrestle alligators for a living so he likes to pull the sharks in the boat for our clients to get a photo. This has become a big niche for us, not only in southwest Florida but also in Key West during the winter months. We fish some of the most fertile tarpon fishing grounds in the world in our home waters, so that’s a very popular trip. It is commonly believed you can only catch tarpon in Boca Grande Pass in May and June, but we’ll start catching silver kings in March and it can last until October, depending on fronts. If ya wanna know our secret, just come fish with us.

Q: Do you think more ladies are getting into fishing these days?

A: Yes, without a doubt. I love that first mating puts me in a position to encourage ladies. Several have told me that I put them at ease to get their fishin’ on! Gals are also becoming more involved on the business side of things. When I began navigating career opportunities in the great outdoors, it was very noticeable. I was adamant about portraying a competent persona — walk the walk, not just talk the talk. Having a freshwater background, I made an effort to read the top saltwater fishing magazines and fished with professionals to educate myself. I would like to encourage gals to do their part to portray a positive and competent image as not to dilute the lady angler’s contribution to the male-dominated fishing industry.

Q: What advice would you give to a young lady interested in getting into fishing?

A: Go! Get on the water. When I first moved to Florida and the saltwater game was new, I made sure all of my buddies knew that if they were hitting the water and had room, I better be invited! I looked for opportunities and made it happen. I would also suggest attending local fishing shows, which is a great way to meet other fishermen and women and learn more about technique and strategy.

Q: So how is it working with Bo?

A: Well, I’m the queen of the house and he is the king of the boat! Actually, we work together really well.

I’ve learned to read him and know what he wants before he has to ask, whether it’s putting out the anchor, readying the cast net, reading the electronics, cutting bait, baiting hooks, rigging rods, repositioning the boat, trolling motor, etc… He has a very vibrant and entertaining personality. Being his first mate and girlfriend creates some hilarious moments on the boat. It is definitely a unique dynamic to work, live, and play with your soul mate 24/7. I feel very blessed although sometimes we want to kill each other!

Q: What is the funniest thing that’s happened to you while out on the water?

A: Oh wow, we’ve had a lot of gut-bustin’ moments on the water! We have the goliath grouper incident that made TruTv’s 20 Most Shocking Moments of 2011 where Bo was fighting an 800-pound freight train with a rope for a show we filmed and it pulled him overboard. Then there’s the time I was fighting a 7-foot bull shark in the Mad Fin Shark Series and he lost his balance over the gunwale while landing it and fell in on top of the shark! That aired on the Outdoor Channel, and at the time wasn’t funny, but now we laugh about it. But my first and favorite “Capt. Bo falling overboard incident” was when he cast net himself off the boat!

To can see more of Deidra in action, follow her adventures on Facebook at Deidra Outdoors. You can find her First Matin’ with Capt. Bo Johnson for their charter biz Tenacity Guide Service in southwest Florida and Key West! Visit www.FishTenacity.com for more info.

You can also catch more of Deidra in action on The D*BO SHOW YouTube channel where she joins Capt. Bo in the woods and water. 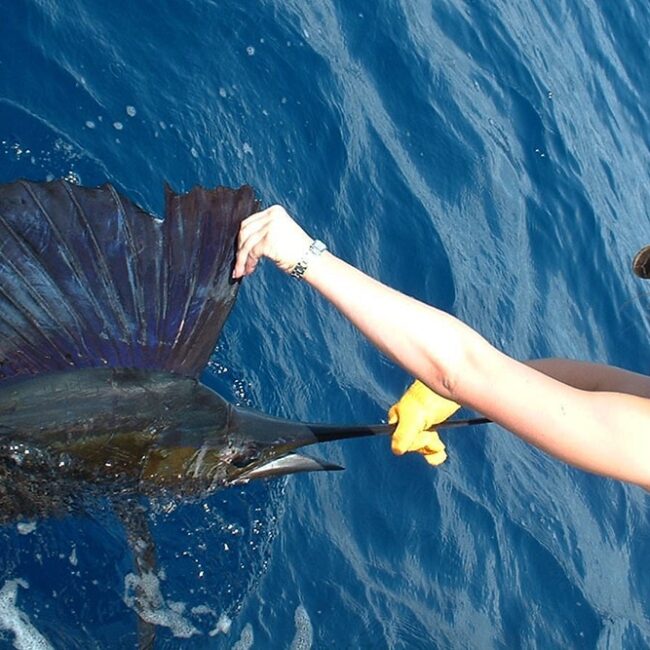 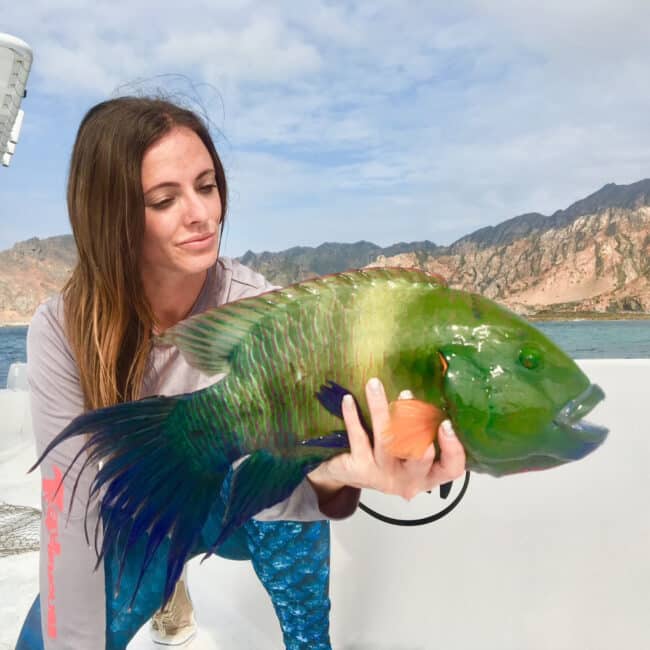 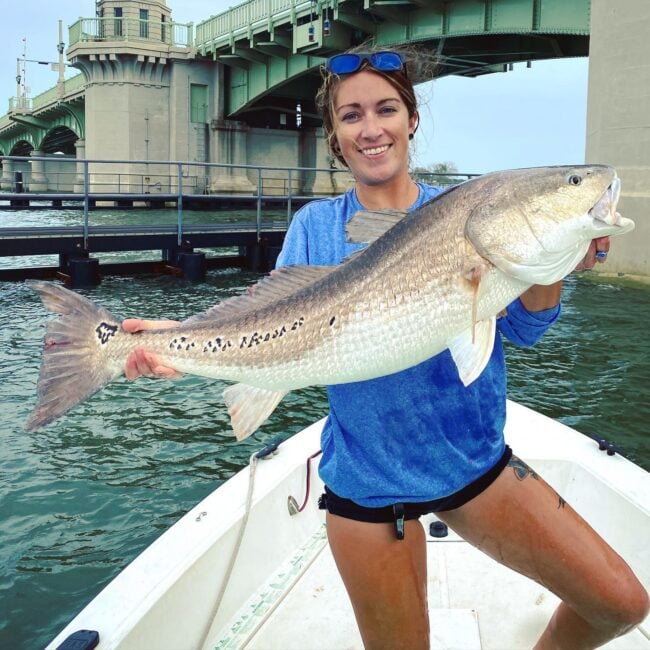 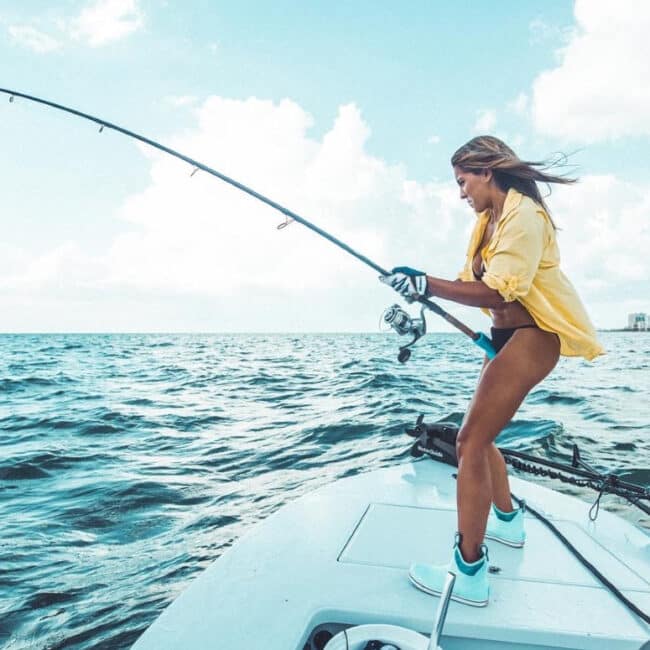